One hour into Chema García Ibarra’s The Sacred Spirit (2021), a little girl uncomfortably asks, “What’s worse? Coke addiction or heroin addiction?” The question, coming from a little girl who is certainly younger than ten in age, was hair-raising. Not because of what the question was, but from whom the question comes. Naturally, as the audience around, a guardian would be uncomfortable about it and try to loosen up. However, the guardian, an overweight middle-class man, answers her query with utmost clarity and not the slightest hesitation. As a result, now instead of one, we have two of our central characters making us uncomfortable.

Not much happens in the film. And yet, from a narrative viewpoint, numerous phenomena are taking place at the same time. A little girl disappeared a few weeks ago, and the search is still going on in Spain. Julio, the leader of an established UFOlogy, has died unexpectedly. And that leaves only José Manuel as the one person who can decipher the humanity-transforming secrets preserved in an alienated space. As with stories like these, the belief of Manuel in the connection between the disappearance and the extraterrestrial realm kicks the plot into progression.

RELATED TO THE SACRED SPIRIT (2021): THE KILLING OF A SACRED DEER [2017]: REVENGE IS A DISH BEST SERVED TWISTED

However, there’s little that comes expected in this surreal narrative. The unconventional diaphragm of the premise itself has much to do with it, but mostly it’s the insurgent nature of the director’s ways that propel the film. He uses an eye for creating contemporary pop-culture mythology and mixes it with his absurd sensibilities to create a hysterical dark comedy that is more original and creatively challenging than anything you might have seen. He grounds his story into a reality so familiar that the ‘feeling of the presence of unexpected’ in the director’s words never occurs. However, there are unexpected pleasures in its long one-shot sequences and profound moments which give the film an atmospheric duality of a novel adaptation. 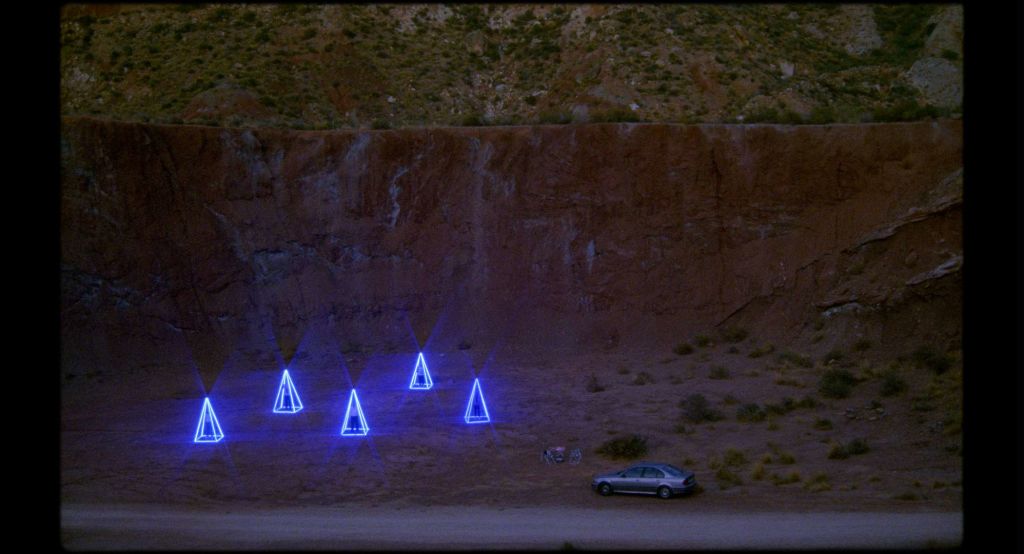 The Sacred Spirit is highly inventive in its concerned approach. However, it also has the world-weariness of a late-career debut for its dark-priest storyteller. Chema García is an established short filmmaker, who made his first short film El Ataque de Los robots de Nebulosa-5 as early as 2008. He is most known for Protopartículas (2009) and The Golden Legend (2019). I haven’t seen any of his short films, but his love for a roar of laughter amid the darkness and dramatic anxiety peaks with this low-budget and high-concept independent work that The Sacred Spirit is. The decision to cast non-professionals in major roles is productive enough because the actors do their bit with efficiency.

The acting is where the audience might be divided. But the absurd opaqueness among the people in the film is by design. A sensory overload of information in the world is an object of satire for the film’s writing. Every advertisement, individual, and little human sound in this film delivers some information or the other. That piece of information might or might not be necessary, but it is seen to be taking a toll on human health and happiness, especially during the pandemic. Processing even useless data into a loud amplifier, the filmmakers use them as pawns in front of the organic imagery.

The science-fiction format of the film is helped by the excessive use of mystifying documentary footage intermixed with the 16mm and 35mm camerawork. It doesn’t look cheap; rather it enhances the mystery brilliantly. The little girl who serves as an underlined protagonist of the film is intelligently put on the frame. She is beautiful, but her character development is far from cutesy or funny. Additionally, it is more maturely conceived than most of the bleak burlesque that the adults perform.

At nearly two hours of running time, chances are that you’ll not be satisfied with the strange, dazzling celestial reverie. The social concern raised in the climax is powerfully handled, but it might come off as gimmicky for you. However, The Sacred Spirit worked as the sort of exceptional dark comedy that rewarded my patience in ways I cannot even begin to discern. It left me baffled, gripped, and astonished.

THE SACRED SPIRIT PREMIERED AT THE 2021 LOCARNO FILM FESTIVAL