Georgian visual artist and filmmaker Elene Naveriani in her sophomore feature, Wet Sand (2021) shows glimpses of auteurist streak which triumphantly and memorably emerges above the story and themes. Wet Sand is set in a Black Sea coastline village, where the sound of the waves and the song of the birds lulls into a sense of comfort. The film opens by looking at the night-time sea, illuminated by moonlight. An old man looks at this serene sight from his balcony. With a soulful song playing in the background, the man is seen wrapping a letter around a wine bottle. The next day the news of the old man’s suicide reaches the ears of the laid-back, sparsely populated local community.  There’s some mystery and buried truths. But most of all it’s a portrait of a community – its small-mindedness and prejudices.

Director & co-writer Elene Naveriani and her Dp Agnesh Pakozdi highlight the significance of the setting within the diegesis of the film. The stirring shots of seaside scenery aren’t simply treated as a backdrop. The camera often positioned at a distance from the characters shows their existence in relation to their immediate environment and social surroundings. The choice of a remote setting and the use of space while dealing with the human subjects made this film intriguing for me.

Related to Wet Sand: Welcome to Chechnya [2020] Review – Shines a Light on One of the Most Appalling Humanitarian Crises of Present Times

Landscape asserts its presence prominently in some of the auteur’s works; say for instance Tarkovsky, Terrence Malick, or Andrey Zvyagintsev. I am definitely not making a superficial comparison between the works of those renowned auteurs and Naveriani’s film. However, the filmmaker’s remarkable control over the craft is reflected in the way she foregrounds the immensity of the natural surroundings to explore the human story at its center. There are few aspects in writing or the structuring (Naveriani wrote the script with her brother Sandro) that didn’t work for me in Wet Sand. Yet if she could make such a subtle and mellow cinema on a somewhat familiar yet relevant story, I am keenly looking forward to her future projects. 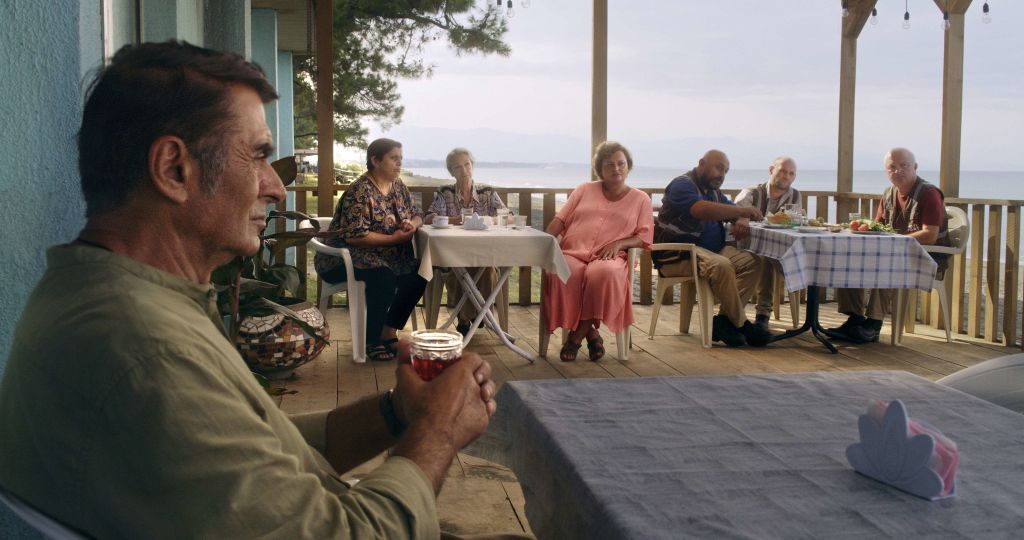 The local inhabitants of the village largely harbor resentment over Eliko. Except for old Amnon (Gia Agumava) and young Fleshka (Megi Kobaladze) who run the beach bar/cafe Wet Sand, others react to Eliko’s demise with indifference. Though Eliko has settled in the village a few decades before, he is viewed as an outsider. In fact, they grumble about taking care of his funeral. Fleshka and Amnon are also misfits in the village, particularly Fleshka who wants to leave the village and is often seen wearing a jacket that states, “Follow your fucking dreams.”

Eliko has a daughter and a granddaughter, but they haven’t visited him for decades. Amnon, however, contacts Eliko’s granddaughter Moe (Bebe Sesitashvili) and she arrives from the Capital city Tbilisi. Lean, tall with a crew cut hairstyle, Moe warms up to Fleshka, Amnon and also gets acquainted with a benevolent old fisherman named Spero (Kakha Kobaladze).

In one nuanced emotional moment, Moe understands the nature of the relationship that existed between Amnon and Eliko for more than two decades. Writers Elene and Sandro Naeveriani occasionally use newsreels to emphasize the rampant sociopolitical and environmental issues plaguing the small nation that lies on the coast of the Black Sea. Fleshka bafflingly looks at the news of the moderate celebration of Family Day due to the ongoing Pandemic. Family Day in Georgia was a creation of ultra-nationalist groups and the Church to oppose The International Day against Homophobia and Transphobia (on May 17th). In fact, press reports from the country indicate severe oppression of the rights of the LGBT community for the past decade.

At the same, Georgia is affected by climate change-induced disasters. Therefore, Naveriani treats the small world in her narrative as a microcosm of the Georgian national reality. Amnon and Eliko had to share their love for each other, hiding from the prying eyes of the locals. Gradually, we also get to know the painful truths behind Eliko’s estrangement from his daughter and his eventual suicide. Nevertheless, there’s hope for Fleshka and Moe who has learned to express their desires, to assert their identity, and most importantly to tackle the bigotries and discrimination. 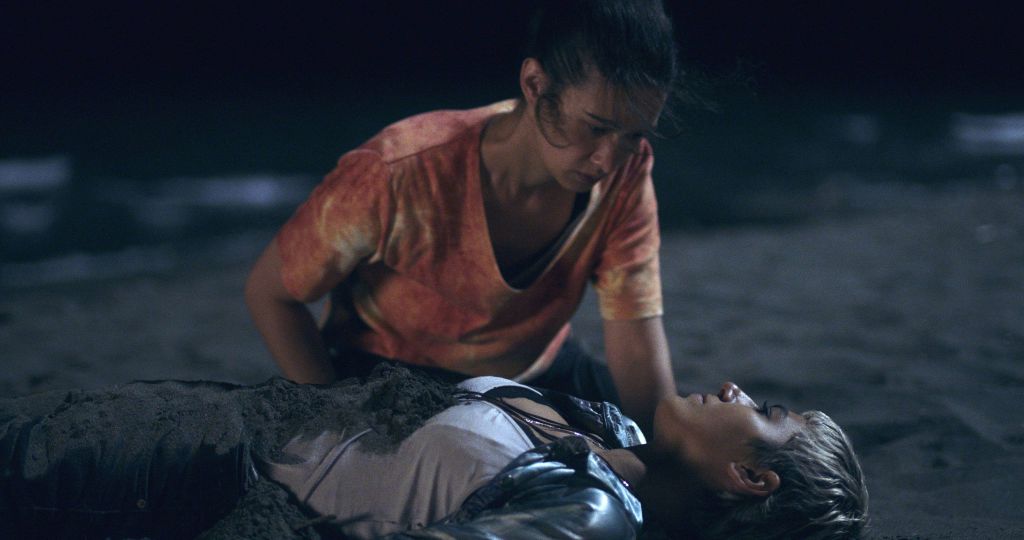 Wet Sand could be defined as a melancholic love story with few mysteries thrown around. The story setup makes us expect certain inevitable things to happen. Naveriani doesn’t largely subvert our expectations, but I loved how every sequence was brilliantly and sensitively staged. The cruelty and ugliness inherent in a conformist society aren’t detailed much in order to elevate the drama. The antagonism is omnipresent, and it does explode at points. However, Elene Naveriani’s compassionate gaze looks beyond the hate. This is where the images of nature, as already mentioned, connect well with the characters and express the presence of larger forces beyond human pettiness. Some like the young policeman are doomed to be spiritually imprisoned, while Moe or Fleshka are set free from the suffocating hierarchy of man-made society.

One final yet most significant aspect in Wet Sand that enhances our movie experience is the sound design and music. From the sound of the sea to the natural sounds that exist in the surroundings or even the footsteps, sound design is very fundamental here to set the tone and emotions within a scene. A lot of sounds are off-camera and yet it all comes together to bestow beautiful texture to the proceedings. The sublime visuals and the sound always bring us closer and immerse us into the environment.

Overall, Wet Sand (114 minutes) is a nuanced and earnest tale of love and intolerance which captivates us with a striking directorial voice.

Wet Sand was screened at the 2021 Locarno Film Festival