Terrence Malick broke into the scene way back in 1973 with the bright, colorful and vibrant debut “Badlands” which later achieved a cult status. He followed it with the intense, breathtakingly beautiful “Days of Heaven”, which came five years after Badlands. Malick took twenty years to make his next, ” The Thin Red Line ” which is hailed as one of the greatest ever war movies and cemented Malick’s place in the bracket of the most influential filmmakers of all time. Which is why when I say Terrence Malick ranked, it could never been a comprehensive thing.

Malick has been making movies on fairly regular basis since then and over the past two decades he has been established himself as this visionary weaving magic on the 70mm. His movies have always been different and unlike anything else in terms of style, storytelling, and their overall nature. Malick has received both critical acclaim and flakes for his distinctive movie-making style. While some hail him as an auteur, some call him a fraud in the disguise of a movie director.

I personally have been a fan of this man which is why I thought it would be nice to do a ranking of his works (from the least favorite to most), as a sort of tribute.

Arguably Malick’s weakest work in his long illustrious career, ‘To The Wonder‘ tells the story of a European woman and American man falling in love with the cloudy, sea-side French coast and trying to work on their relationship in the warm and sunny fields of Oklahoma.

While the idea sounds fairly simple, Malick tried to give it an other-worldly spin by infusing philosophical elements like soul searching, seeking the meaning of love, trying to get a grip at how God or the power we answer to works on us; and he succeeds in doing that, although not as much as his other movies. What makes it an absolutely stunning visual experience is Emanuel Lubezki’s (also sharing his birthday with Mallick) cinematography. From the grim, gloomy, gray and blue tinted coast of Normandy to the sun-kissed shiny golden paddy fields of Oklahoma; Chivo’s lenses create sheer magic, thus compliments Mallick’s vision for the movie.

To the Wonder, although not as influential or effective as other Malick movies, but still stands as a deeply moving, extremely personal tale of modern day love, faith, sadness and what stands in between. 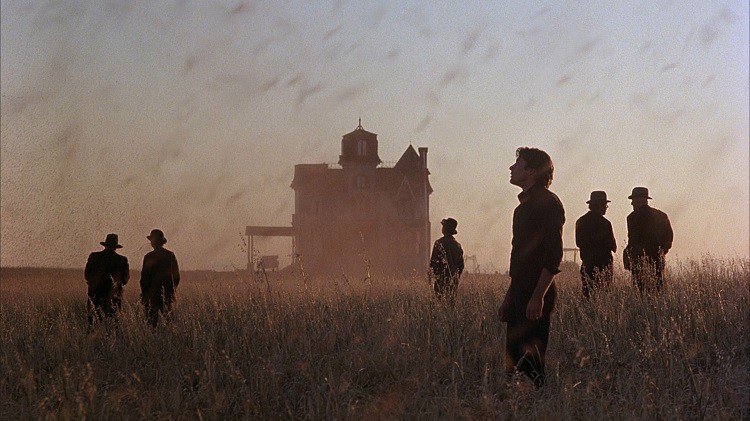 “Nobody’s perfect. There was never a perfect person around. You just have half-angel and half-devil in you.”

Malik’s second directional feature, Days of Heaven released back in 1978 is one of the most gorgeous looking movies ever made in the history of cinema. Cinematographer Néstor Almendros shot this mostly using natural light and rightfully won an Academy award for his marvelous work. With the help of Almendros’s hauntingly beautiful imageries, Malick told an intense story of love, struggle, greed and betrayal featuring four characters, all seeking the help for a better life.

Set in 1916, Days of Heaven was an important and praiseworthy follow-up to Malick’s debut (featuring in this list later), which wasn’t received warmly during its release but went on to become quite a cult classic later on. 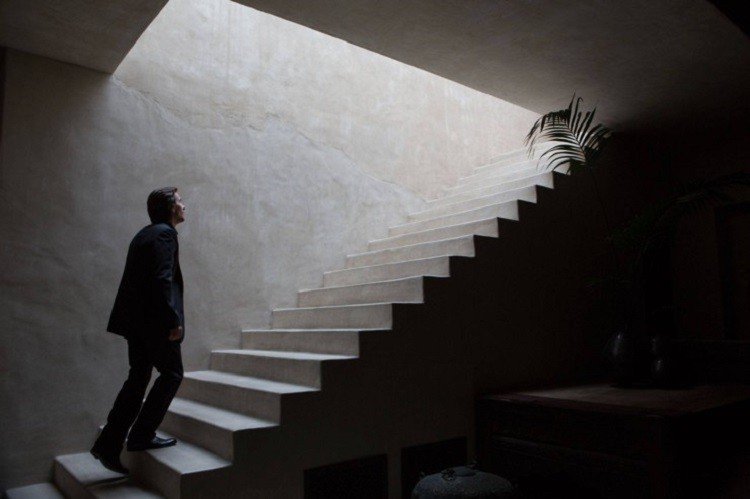 “You think when you reach a certain age things will start making sense, and you find out that you are just as lost as you were before. I suppose that’s what damnation is. The pieces of your life never to come together, just splashed out there.”

Malick’s most recent offering, Knight of Cups is a movie right on his “The Tree of Life” (which comes later in this list, of course) territory where A man (played by Bale) tries to discover true love and seeks for fulfillment trapped in the familiar urban concrete maze of life.

He is constantly roaming in quest of finding solitude in parties full of people, love in the emptiness of people, the meaning of life and its redemption in the wilderness of the world. He is looking for it in the sky, the oceans, and the Rock Mountains. Knight of Cups is continuously moving and searching, but it isn’t reaching anywhere and the quest goes on.

The movie is shot beautifully by Emmanuel Lubezki (collaborating for the fourth time with Malick) in a way that you are supposed to see the natural right through the unnatural. Malick wants you to see the blue sky and not the tall buildings which block its view. He wants you to see the water when the camera goes inside the pool and not the crowd visible in the background, but will you do that, are you ready to not care about the meaningless materials deliberately put in front of you. It’s a film with such powerful imagery, that even if there were no dialogues at all, the impact would have been same.

“This great evil. Where does it come from? How’d it steal into the world? What seed, what root did it grow from? Who’s doin’ this? Who’s killin’ us? Robbing us of life and light. Mockin’ us with the sight of what we might’ve known. Does our ruin benefit the earth? Does it help the grass to grow, the sun to shine? Is this darkness in you, too? Have you passed to this night?”

Twenty years after “Days of Heaven”, Malick returned to tell the story (a semi-fictional version of the actual one) of the Battle of Mount Austen, which was part of the Guadalcanal Campaign in the Pacific Theater of World War II and gave us a war film film which transcended the barrier of the war genre and went into a whole different philosophical level, and eventually became one of the most influential movies ever made.

Unlike focusing on the main war story of who defeated who, The Thin Red Line made an attempt to look at the effects of war on both humankind and mother nature. The importance of human life and the meaning of death took the center stage here and asked the viewers to look at certain things rather differently.

The Thin Red Line is Malick’s most well-constructed movie ever, and his most popular work as well. Released around the same time of another memorable war film (Steven Spielberg’s fantastic Saving Private Ryan), it managed to stand on its own by giving the war genre a whole new spin.

“Love… shall we deny it when it visits us… shall we not take what we are given.”

The New World is a personal favorite and Mallick’s most underrated work so far. Seven years after The Thin Red Line, Malick came back with a slow-paced but deeply moving and extremely endearing love story between a fictional version of Captain John Smith (an English soldier and explorer, played by Farrell), Pocahontas (the popular native American woman figure, played by Kilcher; in her debut) and John Rolfe (the English settler, played by Bale).

While The Thin Red Line dealt with huge, fundamental issues like war and its effect; in The New World Malick decided to heavily focus on the cause, effect and significance of boundless, passionate love between two very different human being in the first half; and the importance of moving on with life and trying to find a rather calm, comforting love (as well as inter-cast marriage) in the second half. This movie also happens to be the first Malick-Lubezki collaboration and Chivo, being the wonderfully talented guy he is, shot this brilliantly and managed to give the movie this other-worldly feel.

Like “Days of Heaven”, this movie was also not received with much critical acclaim but eventually, it became popular among Malick devotees and now it is regarded as one of the greatest movies made in the decade. 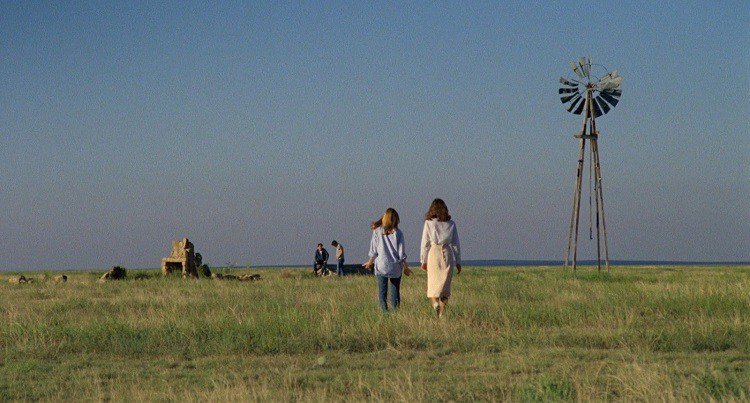 “He was 25 years old. He combed his hair like James Dean. She was 15. She took music lessons and could twirl a baton. For a while they lived together in a tree house. In 1959, she watched while he killed a lot of people.”

Malick’s debut, Badlands happens to be his most straightforward movie (both plot and narrative structure wise) ever.
In his maiden 70mm venture, Malick took two young lovers (Sheen and Spacek) on the run and delivered a tale full of madness, excitement, despair, love and violence.

Loosely based on the real-life murder spree of Charles Starkweather and his girlfriend (although it was not acknowledged during the time of its release), Badlands focused on an impressionable teenage girl from a dead-end small American town and her older boyfriend who hit the road together and discovers the fiery, destructive love between them over the course of a murdering spree.

Malick’s use of bright color palettes, a gripping script, two wonderful performances by the lead and great use of music made Badlands a brilliant debut and after all these years, it stands as one of greatest crime films of all time. 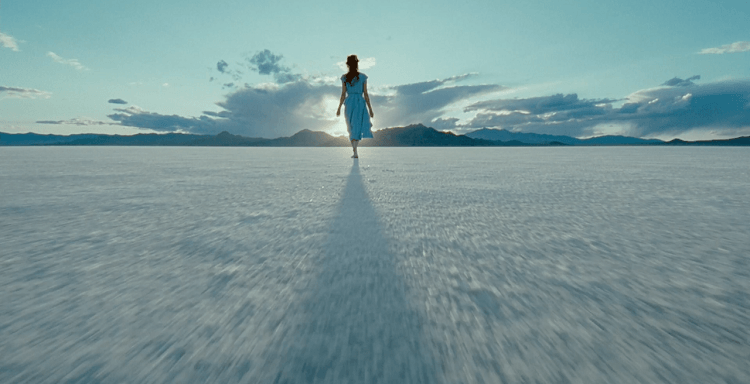 “Where were you when I laid the earth’s foundation … while the morning stars sang together and all the sons of God shouted for joy?”

The Tree of Life is Malick’s most controversial, polarizing (and possibly his best, in my humble opinion) ever. It is a little hard do describe what this film is about. The Tree of Life, as a film, can be polarizing depending on one’s perspective. It has nothing to do with whether the person is a solemn knowledgeable movie watcher, or not. You might see it as a pretentious garbage and an embarrassment in the name of motion picture and hate it vehemently. But then, you might metaphorically bathe in the awe of this film, do some serious soul searching and passionately fall in love with it. During my first watch, I liked it but couldn’t appreciate it much but when I watched it again during a Terrence Malick marathon (that would be one great experience, if you ever try it) and instantly felt connected to it like never before. I lived through it mentally and emotionally.

There is also this extended segment in the movie which depicts the particular lifestyle of a small-town family of 50s’ America, beautifully through Emmanuel Lubezki’s camera, which is particularly effective and adds volume to the otherwise philosophical nature of the film.

The Tree of Life is the kind of movies which help us to realize the importance of this particular form of art called motion picture and why we, as people who consider this as an integral part of our lives, should be thankful for its existence.