Clash wouldn’t have had considerable impact if it stayed as an explicitly political film or as satire. The narrative initially boasts vestiges of both these approaches. But director Diab ultimately changes track to make this a broadly humane work.

On August 2013, 45 Egyptian protestors were squashed into a small, excessively hot police truck, parked near a prison. Most of the prisoners were supporters and members of Muslim Brotherhood (MB) whose government was taken over by the army in July 2013. Prior to the 2013 coup and the clashes between Muslim Brotherhood and the military forces, Egypt gained international attention for 2011 Tahrir Square protests (impeccably covered in Jehane Noujaim’s documentary The Square). Those were hopeful days for young Egyptians. The youngsters from other parts of the world watched the country with awe as the revolution was dubbed to be the first ‘social media revolution’. The three decade dictatorship of Hosni Mubarak was toppled, but in the later months the revolution’s dimension dramatically changed. The push towards democracy lost its vigor and autocracy casually returned back. The 2013 protests were exactly opposite to that of 2011’s. It was more about hatred and division. Amidst this precarious sociopolitical condition and sweltering climate, these 45 prisoners were locked up in the back of police truck. After six hours of standing in small space in temperature over 35 degrees, 37 people suffocated to death. This incident has partly inspired Mohamed Diab’s poignant human drama Clash (‘Eshtebak’, 2016). 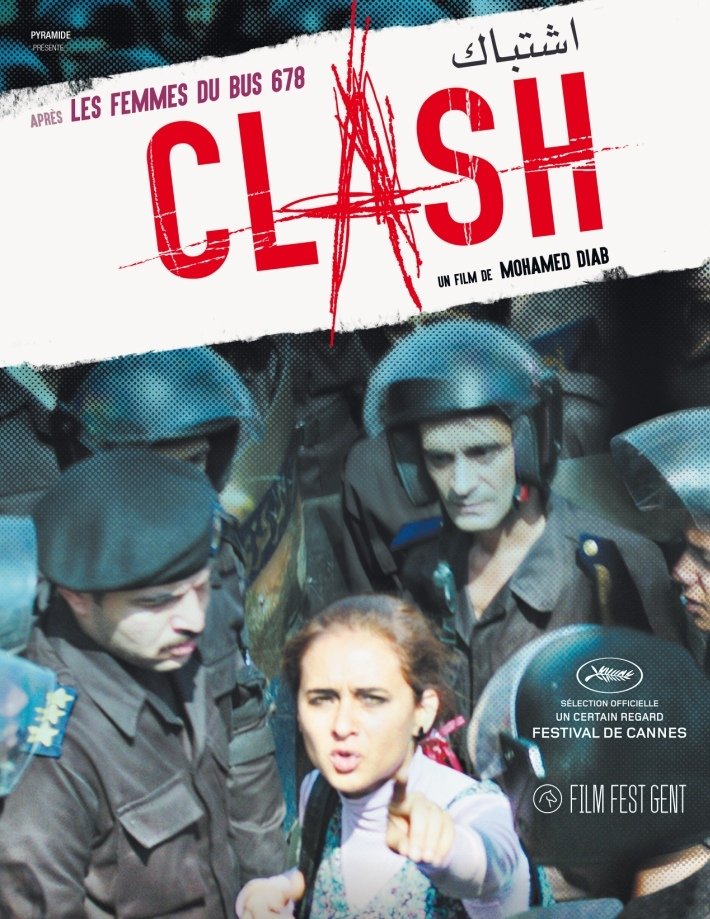 The impressive thing about Clash is its nifty central premise. The whole film takes place inside a overcrowded mobile prison cell. Of course, it’s a construct that’s very old and if poorly handed would merely be a contrivance; Hitchcock used such cramped space for his 1944 movie Lifeboat. But Diab’s formal choice never becomes gimmicky and he uses this simple construct to concoct astonishing emotional impact. The opening, establishing text informs us that the narrative happens in an unspecific day in July 2013, when supporters of the pro-regime Muslim Brotherhood and those favoring military clashed all over Cairo and rest of Egypt. Taking place over 12 hours or less, the movie offers brilliant microcosm of the divided Egyptian nation in the aftermath of Arab Spring. It’s about the survival of common people in a claustrophobic space where fresh air and basic humanity is in short supply. Clash bristles with sense of urgency and upholds humanism rather than settling for soft-idealism.

The film opens inside the truck as a reporter and his photographer are thrown inside after confiscating their mobile phones and camera. They are perfect stand-in for film-maker Mohamed Diab and his co-writer/brother Khaled Diab. The reporter is an American-Egyptian named Adam (Hany Adel) and he records the happenings inside the truck using his Apple watch. Soon, a group of people (at least 20-25) are tossed inside. These people are divided by their political motivations. Some are Muslim Brotherhood loyalists and some are supporters of their army rivals. The reporter calls himself as ‘neutral’, but he is named as ‘traitor’ by both the parties. However, the hardened riot cops doesn’t care which side they all are on or if they are neutral. It’s just one less protesting man/woman in the streets. Temperature and temper boils over within the van. Each of the characters gets to offer their view point and at times it leads to some unnaturalistic informative exposition. But for the large part director Diab vividly addresses the little dignities people suffer in this wider, hate-filled conflict. Water cannons are fired into the truck, right to use the toilet is denied, and the vehicle is often caught amidst the chaotic charge of the rioters. Gradually, these imprisoned people feel the commonality of human experience than stubbornly clinging to their factious identity.

Mohamed Diab debut feature Cairo 678 (2010) was an unsubtle yet emotionally sound work about the sexual harassment of women in Egypt. Clash is a immense breathtaking leap, both in terms of craftsmanship and writing, for Mr. Diab. Shot over 26 days, the film crew faced immense trouble while filming the outdoor protest scenes. Since the camera was inside a vehicle, people had occasionally mistook the stagings for real protest and got involved. The scene at the motorway bridge was said to have caused lot of ruckus, injuring the crew and damaging the vehicle. Although the same stylistic conceit have been vigorously used by modern film-makers like Alfonso Cuaron in ‘Children of Men’ (or by Samuel Moaz in his gritty drama Lebanon), Diab primary focus lies on capturing human suffering rather than to observe blood spills or the visceral thrill of shoot-outs. Even when his camera (ingenious cinematography by Ahmed Gabr) follows the anarchic confusion outside, through the little window, there’s no attempt to showcase the action between protestors and uniformed people; the camera gazes only at the spoils of the conflict. Moreover, director Diab resists the understandable temptation to go for wide shots. Even though some of the violent exchanges happening outside aren’t clearly visible, thanks to the brilliance of sound designers (every stone thrown and ricocheting gun shot keeps us unsettled) and actors we profoundly feel the terror of the outside pandemonium. 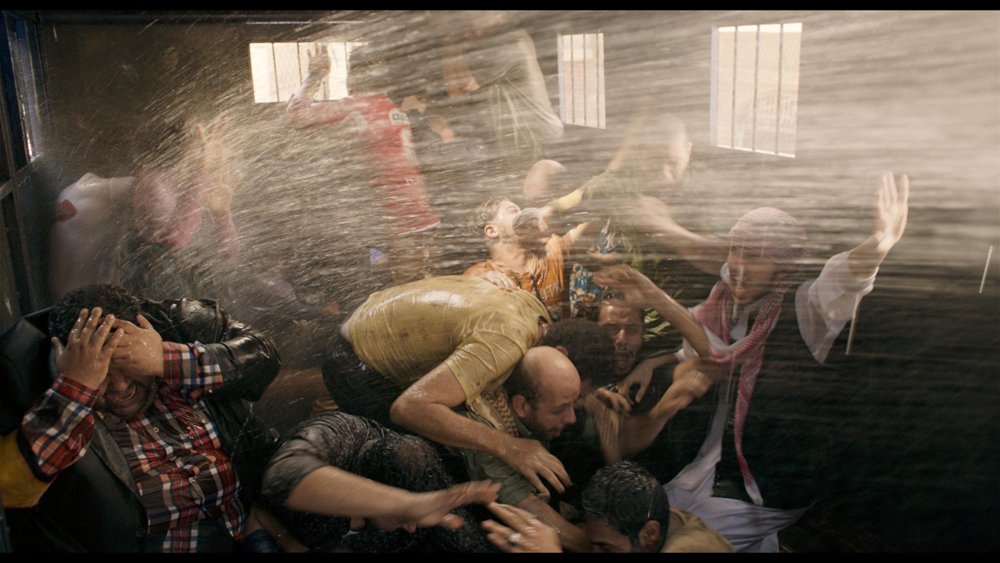 Clash wouldn’t have had considerable impact if it stayed as an explicitly political film or as satire. The narrative initially boasts vestiges of both these approaches. But Diab ultimately changes track to make this a broadly humane work. The events and set-up can be read as allegory of the country’s deep-seated wounds, but the film doesn’t only persist as a pure allegory. By insisting on togetherness and peaceful co-existence (and pushing political specifics to the background), Diab’s movie retains a universal resonance. In one of the most touching scenes, a member of the Muslim Brotherhood known as ‘tear-gas singer’  dryly sings a revolution song, kindling smiles and laughter from all the prisoners. It’s a small yet great moment that dwells on how all these Egyptians once stood together for a united cause and possessed the same dreams.

Apart from few on-the-nose dialogues, the narrative occasionally suffers from far-fetched and unnecessary revelations: for example, the conflict between two close friends or the bonding between poor man and a young boy from gated community over the love for dogs. Such plot machinations inorganically strives to heighten the emotional intensity. The sharp pace of the narrative too sags a bit after the one-hour mark. However, the film recovers from these little missteps in the last fifteen minutes, delivering an ambiguous and unsentimental ending. The final frame that lights up the truck’s interior in sickly green light, hailing from numerous laser pens has the visceral and emotional power to stay with us for quite some time. In those final moments, the truck transforms from being a prison into a little place of sanctuary. In a nation or world driven by mad, corrupt forces of chaos, humanity itself seems to get trapped.