Bernadette (Helena Zengel), who likes to be called Bennie, is a nine YO ticking-time bomb, harbouring aggression & anger, ready to explode at the drop of a hat. That makes it impossible for her to have friends. Her erratic and passive-aggressive behaviour makes it impossible to even engage or reason with her. She doesn’t fit into the regular social structure. That’s why her single mother gave her to the child-welfare system. She is quick-witted, chatty, but with a dash of sarcasm. She brims with brutish energy and stubbornness. She is the ‘System Crasher (Systemsprenger)’.

‘System Crasher’ describes rebellious children challenging every single rule and refuse to be confined into a societal structure. They gradually fall through the cracks in Germany’s child and welfare services.

Within a few days of her admission, the foster homes kick her out for such belligerent, unpredictable and anti-social conduct. All the burden to take care of her falls on a child welfare caseworker Maria Bafané (Gabriela Maria Schmeide). Maria finds it difficult to place Bennie in group homes. Child and welfare services, who already know about her, outright reject Bennie for her out-of-control behaviour. And it will be apparent when you witness the deafening screams and her violent behavior towards other kids.

Once, she sneaks out of her ‘temporary emergency group home’ and finds her way home to see her mother. The encounter with her mother Bianca (Lisa Hagmeister) and siblings takes a horrible, violent turn when Bianca’s live-in boyfriend shows up. They indulge in a physical altercation until he locks Bennie in a cupboard, and police arrive to take her back.

But underneath all the fury and violent streak, Bennie is a delicate, fragile girl, longing for unconditional love and support, and trying to reconcile with her mother. She is an emotional mess, and no one is ready to put all the pieces together. Though Bianca loves her unconditionally, she has a lot of shit going on in her life. She has no job. She’s stuck in an abusive relationship. Most importantly, Biance fears that Bennie’s violence will engulf her personal life and adversely impact her other kids. 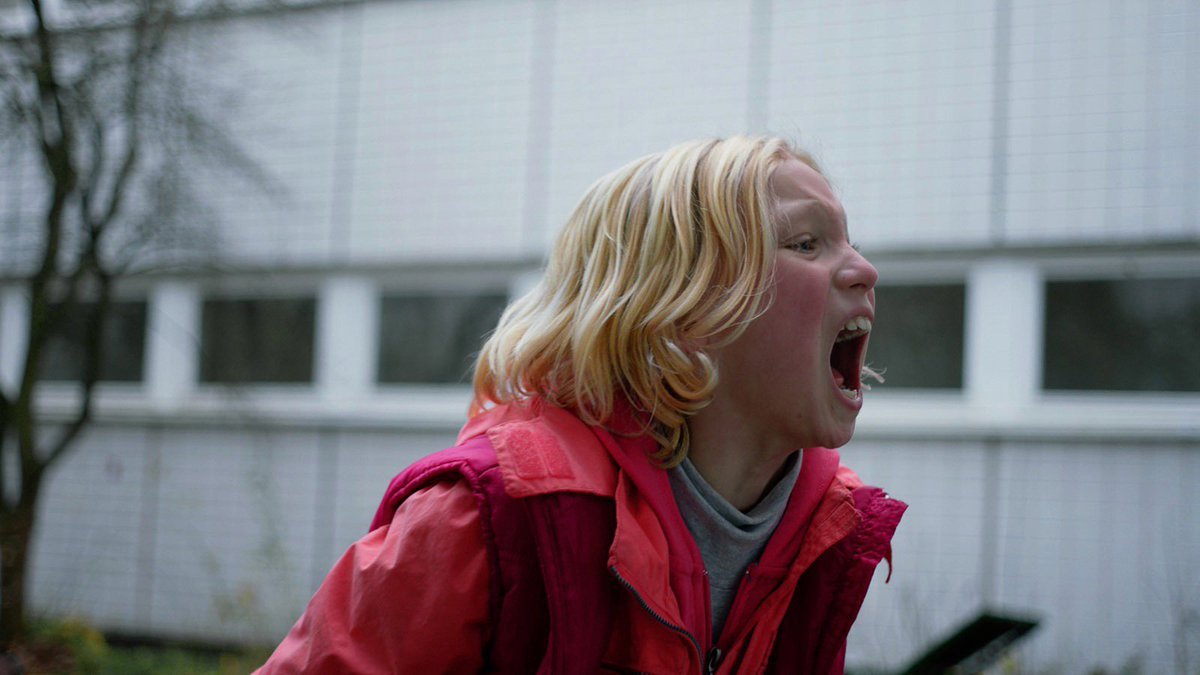 If Bennie’s temperamental behaviour is deeply rooted, there are reasons for it – which is never explicitly dealt with in the film, except once, when we are told of one of the several traumatic events where kids stuffed her mouth with diapers. It’s her reaction to ingrained fear, stemming out of those traumatic experiences that manifest into a rage.

Also, Read – It Must Be Heave [2019] ‘MAMI’ Review – An Absurdist Observation Comedy

Writer-director Nora Fingscheidt roots the intense drama around Bennie’s overwhelming need for love which no one understands except Maria Bafané. When Maria runs out of the option, school escort Micha (Albrecht Schuch) — a man tasked with making sure Bennie goes to class on time — proposes a solution. It requires taking Bennie to the woods to experience the freedom from detractors and distractors, which will supposedly help her redeem herself and find inner-peace.

Though never spelt out in the film, Micha’s scar on his head tells that he might have suffered something similar to Bennie. That explains why he strongly empathize with her. The relationship between Bennie and Micha blooms into a compassionate friendship that is threatened when they return to the group home. Micha develops rescue fantasy while Bennie finds a father figure in him.

Nora Fingscheidt captures the madness in the life of Bennie using the shaky camera movement, fast-cut editing, heavy-metal music in the backdrop. She keeps the lean narrative free from dramatics and generic themes of redemption. Nora doesn’t provide a conventional conclusion to such a tragic arc of Bennie, and there can’t be one. While Nora is at it, she lay bare open the cracks in the care system that’s inadequate to fit in a child like Bennie. In the end, it leaves emotional havoc that would be difficult to piece together.

It Must Be Heaven [2019]: 'MAMI' Review - An Absurdist Observational Comedy Wrapped in a Meta-Critic of Political and Societal bounds

The Elder One (Moothon) [2019]: 'MAMI' Review - A constructed drama that escapes challenges but stays relevant