Norman Foster’s film noir thriller Woman on the Run (1950) is based on a 1948 short story by Sylvia Tate which was intriguingly titled ‘Man on the Run’. While film noir was largely known for its depiction of ‘dangerous femininity’ (realized through ‘femme fatale’ characters), there were few female investigative protagonists. Robert Siodmak’s The Phantom Lady (1944), Henry Hathaway’s The Dark Corner (1946), and Roy William Niell’s Black Angel (1946) featured female central characters who make it their life’s mission to prove the innocence of the persecuted men.

The heroine’s affable quality combined with her independence doesn’t mean that they were allowed to pose challenges to patriarchy. They were rather allowed to rebel and wander freely within certain boundaries. The veiled implications in such film-noirs are to insist on the women’s unwavering ‘devotion’ to husband or the man she loves, and the sacrifices she needs to make before returning to her ‘prescribed’ social role. In Woman on the Run, we witness a listless housewife’s efforts to rekindle the relationship with her estranged husband, and in the process, she must comprehend her ‘faults’. 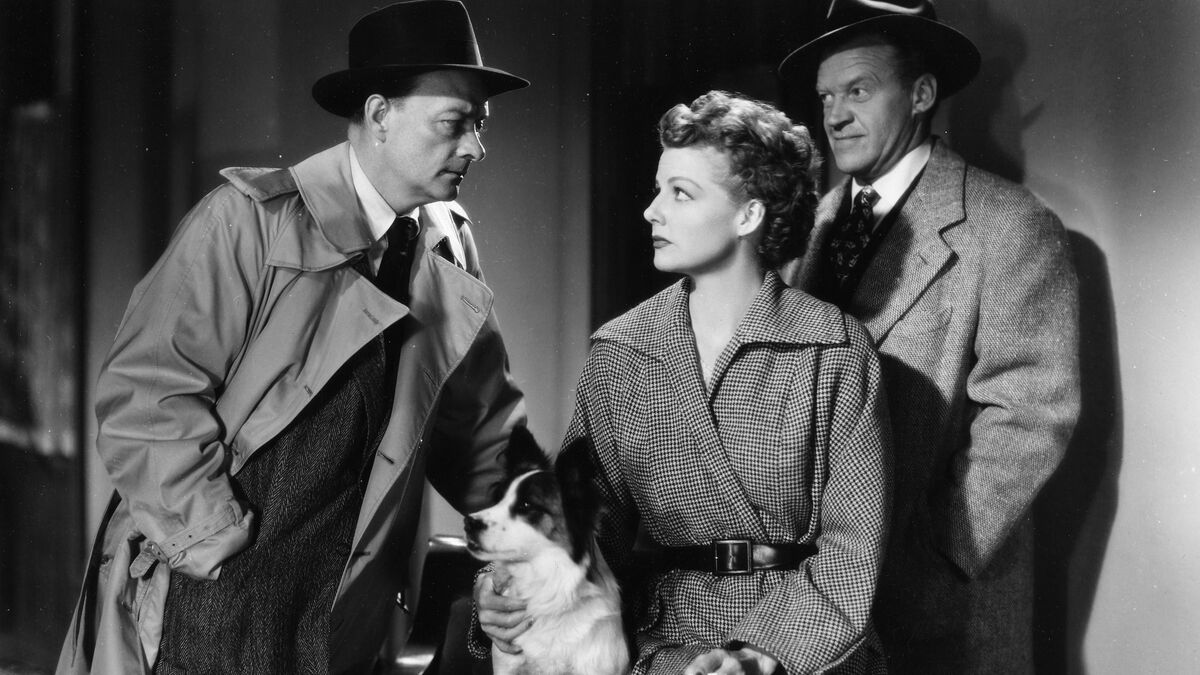 Woman on the Run may sound like a simplistic melodrama on marital discord. Screenwriter Alan Campbell has previously co-written scripts of mesmerizing melodramas like A Star is Born – the earliest version – and Wyler’s The Little Foxes (1941). However, it puts our doubts to rest as it opens on a dark night in San Francisco – the sharp, long shadows darkness of noir atmosphere – with a man getting shot to death. Frank Johnson (Ross Elliott) is out walking his dog when he sees the gangland murder of a man, due to give testimony in a court case. The dog barks and the man with a gun shoot at Frank, but fortunately only at his shadow.

Related to Woman on the Run: The Representation of Women in Film Noir

When Inspector Ferris (Robert Keith) questions Frank he swears he can pick up the killer from a line-up. Nevertheless, Frank panics after hearing that the killing was done on the orders of notorious gangster Smiley Freeman. Fearing reprisals, Frank wants no part in the investigation. While the inspector is busy handling the crime scene, Frank decides to go into hiding. But not before naively spilling out his address, which allows the inspector to enquire Frank’s grumpy wife, Eleanor (Ann Sheridan).

Inspector Ferris finds Eleanor cold and cruel in her feelings towards Frank. Their four-year marriage had gone stale for a while, and Eleanor wonders if Frank has run away to escape the failed marriage. The condescending inspector grills Eleanor because her behavior clearly doesn’t befit a ‘traditional housewife’. He addresses the woman’s ‘callousness’ like this: “No wonder the world is full of bachelors”, and he also later shockingly quips, “Mrs. Johnson, didn’t your husband ever beat you?”. In fact, many other men Eleanor meets throughout the narrative suggest her sole job is to always showcase concern for the husband. However, Eleanor gains some kind of independence as she decides it is up to her to find Frank. She actually becomes very concerned about Frank’s hiding, especially after hearing that her husband has a medical condition.

Frank is an artist who thinks the worst about his works. “It takes more than talent to have a career”, laments Eleanor. The steadily declining relationship with Eleanor hasn’t helped him gain confidence. The rest of the narrative isn’t just about Eleanor finding her husband and unmasking the murderer’s identity, but also about the perceptive wife finding out reasons for their marriage’s downfall. Helping Eleanor in her investigation is the nosey, local newspaper guy, Danny Legett (Dennis O’Keefe). Although she initially begrudges the journalist’s tenacity, she works alongside him, visiting Frank’s old haunts and workplace: a job making mannequins. The severity of mannequin’s countenance is ostensibly designed to reflect Eleanor’s harshness.

Legett also promises cash for Frank’s exclusive interview. Things turn interesting when Eleanor gets a crpytic message from Frank that requires her to ponder over their shared past to unearth clues about the place Frank is hiding. The inspector does his best to lock up Eleanor in her house, but she keeps slipping past his custody with Legett. As she meets different people and visits the scenic places around San Francisco, Eleanor learns Frank still loves her and that there are hopes for salvaging their marriage. Of course, she must make sure to find him first before the mobsters (so the title’s not entirely a misnomer). 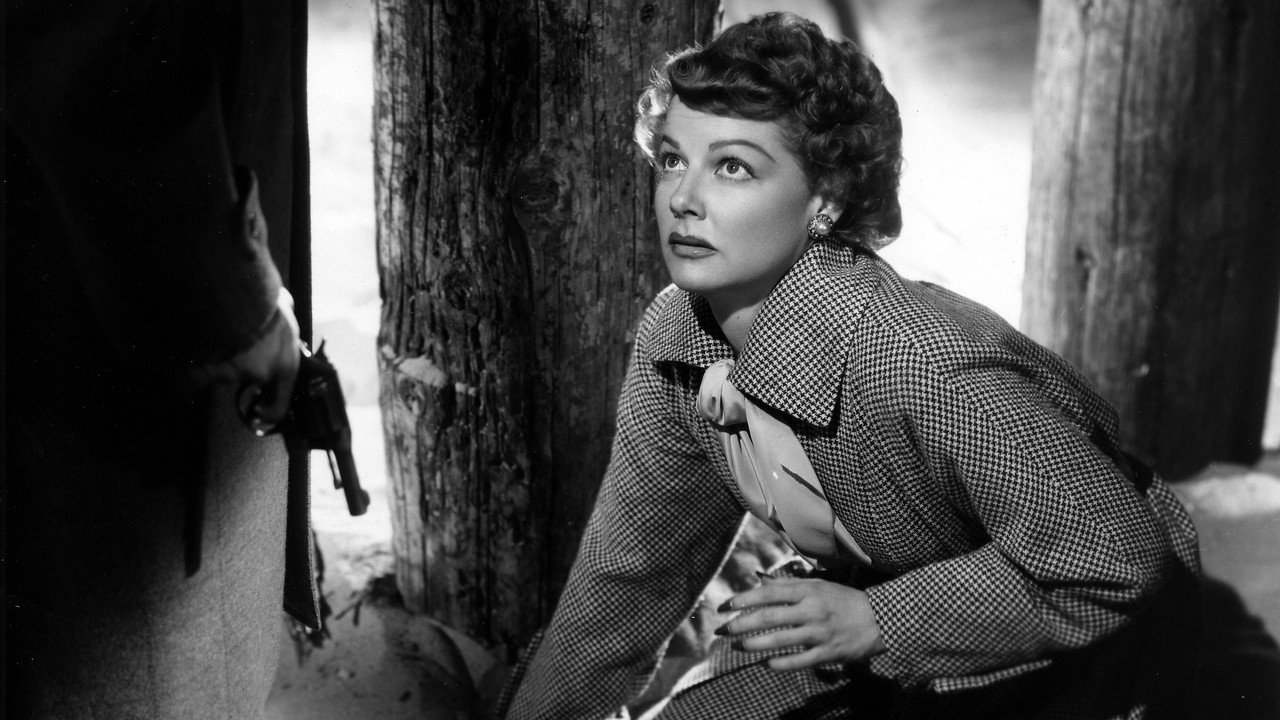 Woman on the Run is definitely a must-watch for film-noir enthusiasts. It contains some brilliant hard-boiled dialogue and dark humor. Frank has named his dog ‘Remembrandt’ because it is the only ‘Rembrandt they can own’. When inspector Ferris questions Eleanor, why the kitchen contains nothing but dog food, she coldly replies, “He’s not particular, and I’m lazy, so we eat out.” On a side note, we can perceive how the house pretty much remains as the metaphor for Eleanor’s marriage with Frank. Or one could say the empty kitchen, sparsely furnished living room, and the grimy, discarded paintings in the attic precisely represent Eleanor’s ‘failure’ as a wife.

One of my favorite lines in the narrative comes towards the end, uttered in the dark shadows of a rollercoaster: “It’s a good spot. I used to come here with my girl when I was a kid. It’s more frightening than romantic. It’s the way love is when you’re young…life is when you’re older.”

Director Norman Foster was largely known for making the stereotypical ‘Mr. Moto’ and ‘Charlie Chan’ film series. Woman on the Run was probably his best directorial effort as he excellently wrings out tension and tender emotions from locating shooting, moving between the Bay and China-town. From the hilly street terrace in the opening scene to the thrilling final sequences shot on an amusement park close to the beach, Foster and famed cinematographer Hal Mohr (Captain Blood, The Phantom of the Opera, Underworld U.S.A, etc) infuses great force to the proceedings through their gripping application of noir aesthetics. Despite the light-hearted material and a predictable denouement, the visuals certainly overcome the narrative shortcomings to an extent.

The snappy dialogues mixed with amazing location shooting and steely performance from Ann Sheridan does makes Woman on the Run a beautiful, little film-noir thriller affixed with poignant emotionality. But as I have mentioned earlier, the film despite the central female character’s quasi-independence establishes this note: that Eleanor must acknowledge her ‘errors’ and eventually ‘submit’ to male authority. Yet regardless of this imperfect, archaic message, Woman on the Run (78 minutes) is a highly entertaining feature that’s watchable for its splendid black-and-white imagery and agreeable amount of cynicism (it was rescued and restored by the efforts of UCLA Film & Television Archive and Film Noir Foundation).