Lee Seung-Won’s Three Sisters suffers from a case of thematic and stylistic overfamiliarity. Narratives around siblings who have crossed over into starkly dissimilar trajectories but are united in their filial loyalties and childhood traumas, which arguably reached its zenith in Hirokazu Kore-eda’s masterful 2015 film Our Little Sister, are burdened by the inevitable obligation to render similar emotional truths with greater probity.

While Seung-Won sticks within the instantly recognizable ambit, his film never becomes the stuff of blasé because the narrative beats are handled competently and engagingly. The honesty in the telling keeps the drama sailing, successfully investing the viewer emotionally, despite a clear lack of ambition for any sort of boundary pushing or skill in towing the narrative around in surprising ways.

‘Three Sisters’ treads no new ground at all but the narration manages to make the viewer care and stay the course with the principal three leads. Pitch perfect performances, nailing emotional extremes, only serve to bolster the viewer’s emotional involvement. The three actresses are sparkling but the standout is Moon So-Ri (who doubles as a producer on the film). Her performance as a devout Catholic choir master wrestling with her faith and strict code of behavior, that is tested by certain circumstances she must confront, is exceptionally and finely attuned to all the ensuing emotional troughs. She excellently plumbs her character’s realizations that her Christian values are all crumbling, also delineating a scathing firmness in the face of trying situations. 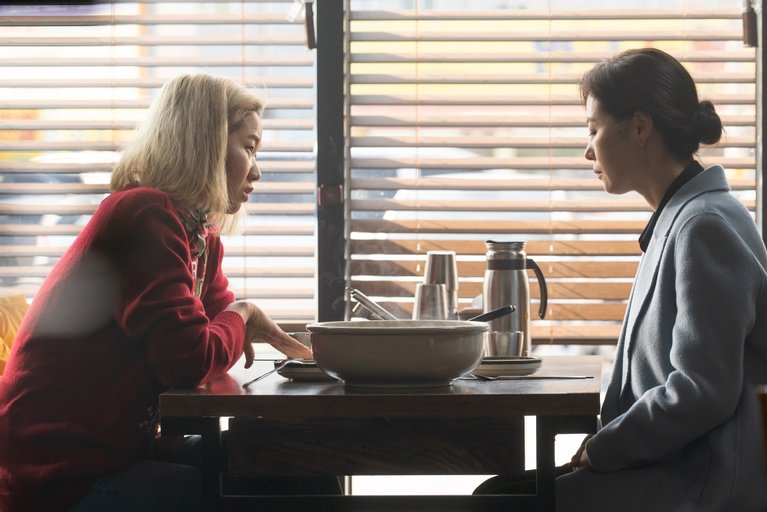 As the film toggles among the tracks of Mi-Yeon (Moon So-Ri), Mi-Ok (Jang Yoon-Ju) and Hee Sook (Kim Sun-Young), the viewer is made acquainted with differing modes of motherhood. Mi-Yeon is the most transparently committed to having the façade of a tight knit, mutually trusting and reliant nuclear family unit. She is punishing and unbending when her daughter is unable to say grace at dinner, or metaphorically speaking, whenever the reassuring security and stability that her faith offers is disrupted and challenged.

She designs her temperament and nature of response to crises according to Catholic codes. She holds these principles so dear it strips her of duly functional emotional articulation, forcing her impulses to be unusually, inordinately repressed, which breaks down in hysterical fits and wild actions only in desperate, brief moments. The furnishing of a full-fledged family is her sole anchor and her ways of expunging all threats to this space is frightening in its zealously punitive severity to keep it all together.

Mi-Ok is a screenwriter, ironically written by Seung-Won as an abundant mess of clichés regarding the perception of a writer in its broadest imaginable sense. She is prone to exaggerated impulses and random wrathful moods and fits of heightened superciliousness, as she swigs booze all day and remains freely unmoored from all the supposed expectations from her and apparent obligations she’s bound by. She has a stepson whom she doesn’t antagonize but barely attends to.

Related to Three sisters – A Tale of Two Sisters [2003] Review

Mi-Yeon acts as her nurturer and provides her maternal support, while Mi-Ok struggles to be conventionally motherly, knowing she is not built for it but trying nevertheless. Mi-Ok’s vacillation between her natural self and persistent attempts to be responsible and loving in tangible, overt ways drives her track. Strangely, as if it could not be any clearer, Seung-Won inserts an entire scene just to underline this point and has Mi-Ok ranting drunkenly about how she wants to be a good mother but is unable to. While Yoon-Ju is convincing in depicting the helplessness, the scene feels unnecessary and should have been excised at the edit table.

Hee Sook is stuck in financial dire straits and is constantly apologetic to everyone almost as if she is guilty for roping them too in the muck that is just her doing. Her relations with her daughter who is an addict is decisively strained, the latter raging at her, indicting her for not giving her better than a broken home. All of Hee-Sook’s exertions to be there for her daughter are contested by the latter’s refusal to accept her. In one scene, Kim Sun-Young, who plays Hee Sook, is heartbreaking as she clutches onto her daughter, asking for some empathy while the latter announces her dissociation and departure from the household.

Sun-Young adeptly conveys Sook’s fatigue born both from fighting one’s circumstance and the consequence of an ill-judged early choice whose brunt she now has been bearing for long, simultaneously seeking a sliver of understanding and pursuing a healthy state of being that remains stubbornly elusive.

Three Sisters winds towards a culminating scene of outbursts, as characters demand long due apologies and unleash the gamut of frenzied emotions, Moon So-Ri being the propulsive center of it who explodes spectacularly. For the scene, Seung-Won opts for a raw emotional display, mercifully abstaining from any thumping score, which hits the viewer resoundingly because the performances demonstrate the dimensions and wellspring of the anger with just the right amount of nakedness and restraint.

Seung-Won intersperses the narrative with flashbacks in black and white, illustrating the childhood traumas and also the specific reasons explaining Hee-Sook’s current persona. Son Yeonji’s editing efficiently cuts back and forth, nicely using Park Kicheon’s music at one point while setting up the flashback, but might leave the viewer wishing for more experimental decisions.

Lee Seung-Won obviously isn’t aspiring for lofty ambitions here as his approach indicates; one can predict the beats, the points of conflict, reconciliation that is ultimate, the bitterness and resentment truly cuts through only in few scenes, the focus being more on the desire to connect with each other. Yet, ‘Three Sisters’ works its emotional grip beautifully; despite moving to a been-there-done-that final scene, the concluding rush of emotions evoked is undeniable.