Mad Max: Fury Road is the most acclaimed action film of the decade so far, whether you like it or not. In an age of pointless reboots and pandering to a nostalgia that can’t be resurrected, Fury Road seemed to be the exception to the rule as it soon became regarded as one of the best action films ever made, was hailed as one of the best films of 2015, and even dethroned the second in the series (The Road Warrior) in terms of the on-screen display of biffs and brawls. As good an action film as Fury Road is, this leads to some quality hyperbole when it came to praising the film, which I believe is neither the best action film of the decade, nor the year, and may not be the best Mad Max film out of this overglorified series.

Critics would disagree, who placed Fury Road right at the top of their Best of the Year lists, giving them a second opportunity to exaggerate the film’s merits, with AV Club calling it “an art film”, IndieWire referring to like a “Tarkovsky” film, Consequence of Sound declared it has “one of Hollywood’s strongest feminist statements in years,”, and Slant referred to its “poetry” and “implicit progressive politics and outsized metaphoric constructions”. First of all, no, Fury Road is not a Tarkovsky film and it’s a far cry from being an art film. It’s an action film first (with some superb visceral action sequences often reliant on in-camera stunts and creative world-building design), and as with most contemporary action films, the themes and characters sit on the back-burner in favor of the action itself. Critics are over celebrating this fine film when they try to pin this excess praise to it as this action blockbuster is casually toying with easy-going and relevant themes, such as post-apocalyptic dictatorship, male supremacy, loss of a natural habitat, and feminism working against oppression. These are worthy topics to tackle, though ones whose mere presence can easily generate discussion, even if they’re not tackled to fruition like they aren’t in this film – there’s no time to explore these themes in depth because there are trucks to explode. Boom!

Fury Road fails when it at times tries to go beyond just an action film and introduce character drama into itself, but this never gets established into something satisfying because the film needs all the time it can with its linear story and exciting action scenes. Max has visions of people he wasn’t able to save (specifically a child, naturally), with these visions showing prominently in the first few scenes, but then seem to go nowhere, don’t really fit into the story of him saving the women, and this little character side-plot never gets established or even comes to any conclusion – its inclusion in the film is simply to occasionally spook Max out of his solipsism and become aware of the mortal lives around him, which is a helpfully brief bit of character motivation. 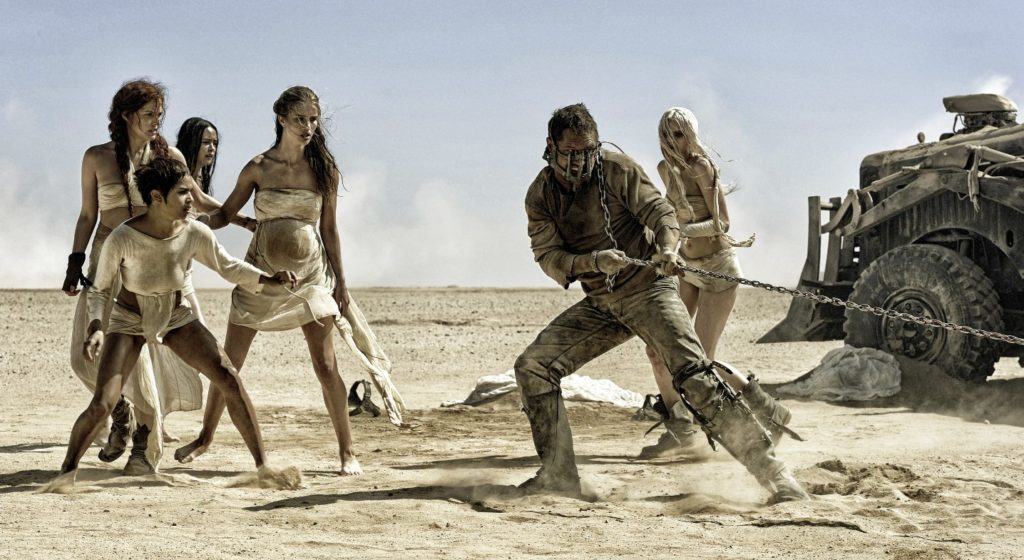 Likewise people don’t want to see action scenes shoe-horned in their romance films, people also don’t want to see romance stories shoe-horned into their action films, unless the romance (like any character development) absolutely supports and strengthens the action moments – most blockbusters don’t manage to pull this off too well and Fury Road is no exception. Nux’s character is also given hasty and half-baked development when he makes the shift from dedicated War Boy servant of Immortan Joe’s to a willing helper of the wives of Immortan Joe’s to escape. All it takes for this character to make the shift from supporting antagonist to supporting protagonist is a quick and immediate little relationship with one of the wives, Capable, who convinces the others to let him help them. This is one of the only pieces of character development in the whole movie and it’s so forceful, brief, and telegraphed that it makes it hard to accept the critics’ claim that something this flimsy could occur in an “art film”, as if a little romance would intensify how we feel about the characters, rather than feel cheapened by their lacklustre relationships. No time for that, though, kaboom!

But what matters most to Fury Road isn’t it’s oh-so-relevant themes of capitalism gone awry and the activists of the general public banding together to overthrow the oppressive forces – it’s the action. The flat-out, top-gear action is mostly made up of an extended car chase as various characters shoot and throw blows at each other across the many fast-traveling vehicles, which occasionally tumble, roll, and explode. Not the most varied action there is, and not particularly boasted by a strong underlying story or intriguing characters, but fun nonetheless. I claimed earlier this may not be the best film in the series, as the over-the-top action here is comparable to the different sort of brand of over-the-top action in The Road Warrior, which certainly highlights the difference between action movie entertainment in 1981 and 2015.

The action in The Road Warrior is similar in concept and set-up, though seems to feature less on-screen carnage and even less sensationalism to the cinematic form (such as scattered editing and heart-pounding music), but what it benefits from is even less post-production tampering that Fury Road has and features more in-camera effects and stunts that are all the more exciting for their realistic appearance. It also benefits from a lack of colour grading, making it appear as authentic and life-like as possible, whereas Fury Road’s visual aesthetic has been fine-tuned in the grading studios and, although gives it its unique graphic-novelesque appearance, also seems to dilute and mildly flatten the realism of the action (as it goes with most contemporary blockbusters).

As I also claimed earlier, Fury Road is not the best action film of its year, with that title going towards Mission: Impossible 5, a blockbuster action film with some flaws not seen in Fury Road (like a memorable villain), but with far more variety to its exciting scenes of espionage and action. It may not be as audaciously brutal and visceral, but to me, its scenes of underwater espionage contain more tension, the tight-knitted car chase is more thrilling, the freeway bike chase is more exhilarating, and the opening airplane stunt that Tom Cruise pulls off is head-swimmingly brilliant. Plus, the character relations in M: I5 is a little more measured, featuring a single man and a single woman working together to kick ass, but ultimately the romance that everyone expects from blockbuster films now never materializes here. Although it may be lightly teased at times, this film doesn’t feel the need to include a romance story (like all other action films do) so that the relationship between these two characters isn’t cheapened.

There’s a lot that can be admired over Fury Road, especially much of its unique design such as the derby-like vehicles, the harsh Australian accents, and the guitar-flamethrower wielding Doof Warrior. It was nice to see a film like Fury Road buck the trend of mediocre and forgettable reboots, but the critics tripping over themselves to finally lend praise to such a film over-did it. Fury Road is currently regarded as one of the best action films of this side of the century, but that claim may start to slip over the years as people realize it simply has the best action scenes, rather than is the best action film.