It’s a powerful enough word at the best of times, but the exclamation mark gives it that edge of delirium and melodrama and despair – just the way Norman Bates yells it at the end of Psycho. Or maybe we’re supposed to hear a second, brutal two-syllable word immediately afterwards. Darren Aronofsky’s toweringly outrageous film leaves no gob unsmacked. It is an event-movie detonation, a phantasmagorical horror and black-comic nightmare that jams the narcosis needle right into your abdomen. Mother! escalates the anxiety and ups the ante of dismay with every scene, every act, every trimester, taking us in short order from WTF to WTAF to SWTAF and beyond. 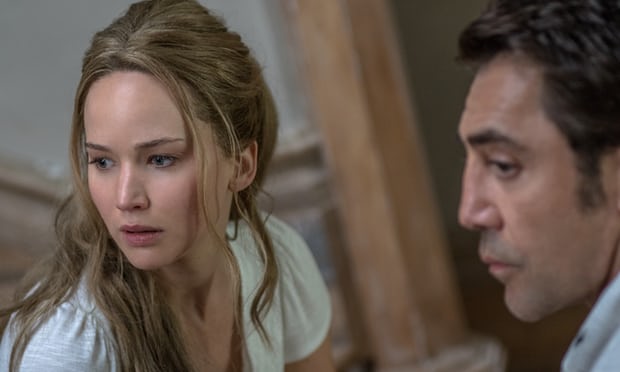 It’s a very bad dream of very bad things: influenced perhaps by Polanski’s Rosemary’s Baby or Buñuel’s The Exterminating Angel and I suspect that Aronofsky has fallen under the spell of the dark master of offensive mischief himself, Lars Von Trier and his horror film Antichrist. But it is as deadpan comedy that this film can be understood: a macabre spectacle of revulsion, a veritable agape of chaos. The opening act gives us a view of a human heart being flushed down the lavatory – as good an image as any for the film’s mysterious, hallucinatory callousness. Jennifer Lawrence and Javier Bardem are tremendously operatic as the leads and it is great to welcome Michelle Pfeiffer back to the big screen in a pleasingly cruel supporting role.

Lawrence and Bardem play a married couple, never named, who live in a colossal house in the middle of nowhere: an octagonal folly belonging to his family which has had to be extensively rebuilt after an awful fire. Lawrence has evidently taken on the task of design and decor. This is her domestic passion-project activity pursued in a submissive spirit while her famous older-man husband gets on with his agonised vocation: trying and failing to write. He is a celebrated popular author and poet whose work has touched people deeply – a kind of solemn Paulo Coelho figure who is now however wrestling with writer’s block, unable to get his desperately sensitive words down with an old-fashioned fountain pen on what looks like parchment. No laptop for him. And yet Jennifer is doomed to be a kind of B-list Sofia Tolstoy, harassed by her husband’s creepy acolytes whom he indulges.

Something is very wrong. Their lives together, so seemingly perfect, are barren in terms of literature and biology. Because they have no children and that is a problem. Yet their emotional stagnancy is shaken up by the appearance of a strange visitor knocking at the door late one night. Ed Harris plays a man who claims to be a new orthopaedic surgeon at the local hospital; he thought their house was a B&B – huh? – but could he stay the night anyway? Instantly affable and even exuberant, the great author says sure, and to his young wife’s silent astonishment starts chatting raucously with this stranger, drinking whisky with him, letting him smoke in the house. Then the man’s wife shows up – Michelle Pfeiffer – who is casually disrespectful of Lawrence’s position as mistress of the house. She starts offering deeply unwelcome and impertinent advice about how to keep their marriage fresh, presuming to comment on her hostess’s lingerie which she finds in the utility room washing machine.

As if in a nightmare, this couple effectively invade the house and it turns out that the “surgeon” has a much more direct interest in the author than he at first admitted. These people’s presence in their lives is to end in violence and calamity and yet it is a disaster which leads to a happy development. The evil effectively impregnates her: or is it that they have alchemised the evil into goodness and a burgeoning new life? The prospect of a baby appears to be a happy ending which cancels the ordeal which she has just endured for her husband’s sake. Yet her troubles are just beginning. 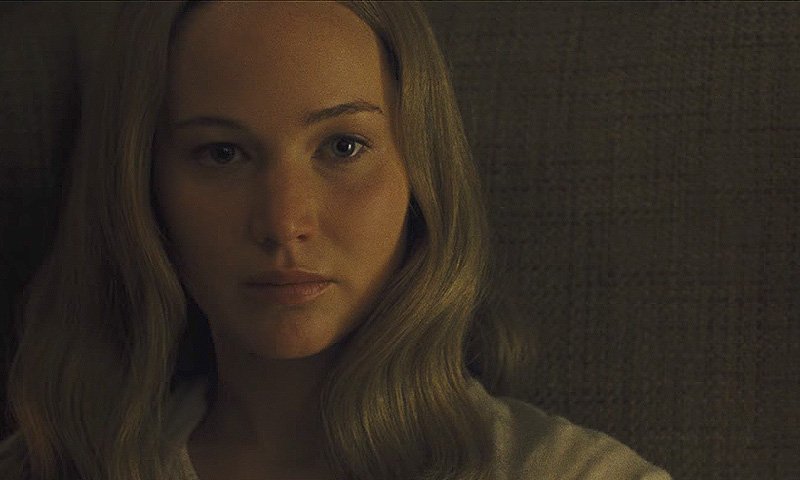 Lawrence carries the movie. Aronofsky keeps his camera close into her face almost all of the time: her creamy, waxy youthfulness and beauty fill the screen and immediately transmit the displeasure and disquiet that she must keep under control. Bardem’s sensual slab of a face is closely monitored too: responding to her furious complaints with a complacent, seraphic smile, treating her like an uncomprehending child or a bovine icon, orbiting him as the centre of a glorious new belief system which will be in place as his published works inspire more and more people.

Mother! in its way reminded me of the musical The Book of Mormon: it could be about the birth of a new religion with all the irrational absurdity, vanity and celebrity worship that this entails. Or it could be a satirical portrait of a marriage and the humiliation involved in catering for a sleekly pompous man old enough to be your father. But maybe it is just about the gleeful anarchy involved in destruction, in simply taking the audience on a series of stomach-turning quantum leaps into madness. As horror it is ridiculous, as comedy it is startling and hilarious, and as a machine for freaking you out it is a thing of wonder.

This review is written by Film Critic Peter Bradshaw, originally published at The Guardian. Peter watched the film at the Venice Film Festival 2017. We obtained his permission and republished the review on High on Films.