The documentary ‘Own Way’ is Kim Song-mi’s debut feature. She produced the film with Studio November which she co-represents. Own Way talks about an experimental community called ‘Don’t worry village’ which was initiated in the parts of Mokpo from South Korea. Ordinary young people whose current life is not good somehow moved to this village in the search of something worth living for. While basing the film on a particular topic from actuality, the film further tries to speak about the need for a drive worth pursuing in the otherwise capitalistic environment.

As aforementioned, several young people move to Mokpo to be a part of this community. Most of them were either bored with their mundane lives or were considered as weird outcasts in the community they belonged to. They came in a flock to this utopian idea of a village to seek for something that had been lost in the opportunistic environment from outside. As a result, the founder members started interviewing these people to see if they’re genuinely interested to be a part of it or not. 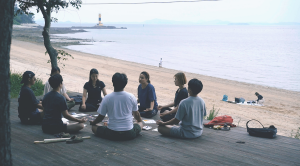 Similar Read: THE WANDERING CHEF [2019] ‘SFF’ REVIEW – A RICH TRIBUTE TO MATERNAL LOVE AND THE REMEDIAL POWER OF FOOD

Most of those who came dealt with traumas and depression in the past. And there were hardly any people who listened to their worries where they came from. Some of them were also lost in the hurdle of earning and the overall dissatisfaction resulting in ennui. This newfound community breathed fresh air in their desires to fulfill them without having to primarily worry about earning in order to survive. It gave them a kind of freedom that they hadn’t experienced outside the confines of this village.

In the beginning, their only goal seemed to enjoy as much as they could as a result of abundant freedom. They drank till late nights and partied for as long as they could. That resulted in their disagreements with the locals which further solidified their bond as a community to understand their responsibility. While experiencing these worry-free weeks, they went through the so-called life-changing experiences that urban people experience when they visit rural areas. Still, their newfound identity was carved in this village while utilizing their skills into something fruitful. In one way or another, it affected their lives on a deeper level while leading them to a more pleasing path. They found ways to deal with their anxieties to deal with the materialistic world.

While shooting all the footage, the director Kim Song-mi was living as a part of them. And she seems genuinely interested in the basic idea which is apparent through her decoding of all their experiences. The calm, contemplative tone maintained throughout the film, helps in sharing the experience than necessarily looking for the end-results. Her enthusiasm, although enticing, doesn’t necessarily translate into the film. The main problem of which is that the film is too wordy. 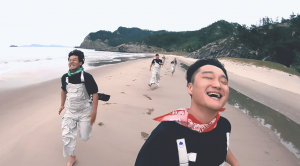 Even when she wanted to make it as ‘an essay’ more than footage, it kills its own purpose of sharing their intimate moments, unfiltered. Moreover, the voice-over narration describes pretty much what the viewer gets to see on the screen. That itself makes most of the duration spoon-fed. As a result, the actual experience gets lost in translation. Other than a few of her interventions explaining what’s in-between, the film just loses grip. It just feels too long without any particular purpose.

Besides, their experiences are not as revelatory as they were made out to be. Although the film was engaging, it tries to portray their journey as a profound exercise while lacking the depth required for it. Even when some of the moments had an emotional levity, they were followed by a string of typical and unsatisfactory ones. As a result, this ‘soul-searching’ documentary turns out to be a mid-tier affair.

Top Tamil Movies of 2018 and Where To Watch Them Online