“Loves of a Blonde  may somehow fall under the romance and comedy genre, but it has nothing to do with that insipid and superficial signifier: rom-com.”

The political-minded film-makers of Czech New Wave in the 1960s may not have been as heralded as the stylistically influential French New Wave cinema directors. Yet the Czech films’ nuanced study of human experiences – pullulating with foibles, romantic idealism, disappointments, and inadvertent comedy — is unparalleled in the world of cinema.

The Czech film-makers of the era had things more in common with Italian neo-realism than their French counterparts; for instance, the emphasis on natural lighting, non-professional actors, real locations, etc. At the same time, the Czech New Wave films excelled in diffusing a seriocomic tone to the proceedings, which subtly conveyed the tragic and conceited ideological demands of the state socialism.

It is also important to note that these brief yet astoundingly radical bursts of creativity in Czechoslovakia happened during the period of general liberalization in the country’s politics (known as ‘Prague Spring’) which duly came to an end in August 1968 when Soviet Union tightened its oppressive grip [Czech film-makers continued to use black humor and crafty metaphors to comment on the life behind Iron Curtain few years after the crushing of Prague Spring, but the film movement was gradually disbanded].

When the Soviet-led invaders threw obstacles at Czech film productions in the late 1960s, some of the film-makers emigrated to the West, the most famous among them is Milos Forman. The Czech New Wave offered a different variety of directors: Vera Chytilova, Jan Nemec, Ivan Passer, Jiri Menzel, Dusan Hanak, Jan Kadar, Stefan Uher, etc.

Milos Forman was the most humanist film-maker of the bunch and also a gentle satirist. His three Czechoslovakian comedies – Black Peter (1964), Loves of a Blonde (1965), and Firemen’s Ball (1967) – subtly criticized (and implicit to an extent) the socialist government’s policies. Forman particularly acquired renown for showcasing human ineptitude and silliness (a thematic preoccupation that incurred the wrath of the Communist authorities).

The style of Forman’s Czech films didn’t just belong to himself, but it was forged by his regular collaboration with screenwriters Jaroslav Papousak, Vaclav Sassek, Ivan Passer (who also directed the pivotal Czech New Wave movie, ‘Intimate Lighting’), and cinematographer Miroslav Ondricek. Both Black Peter and Loves of a Blonde (shot in black-and-white) was set in a working-class background, but it neither confirmed to positivistic Social Realist view nor the glum Italian Neo-realist view. Forman and his screenwriters’ works exhibited a shrewd perspective, warmth, and sad irony that aren’t easily categorizable. 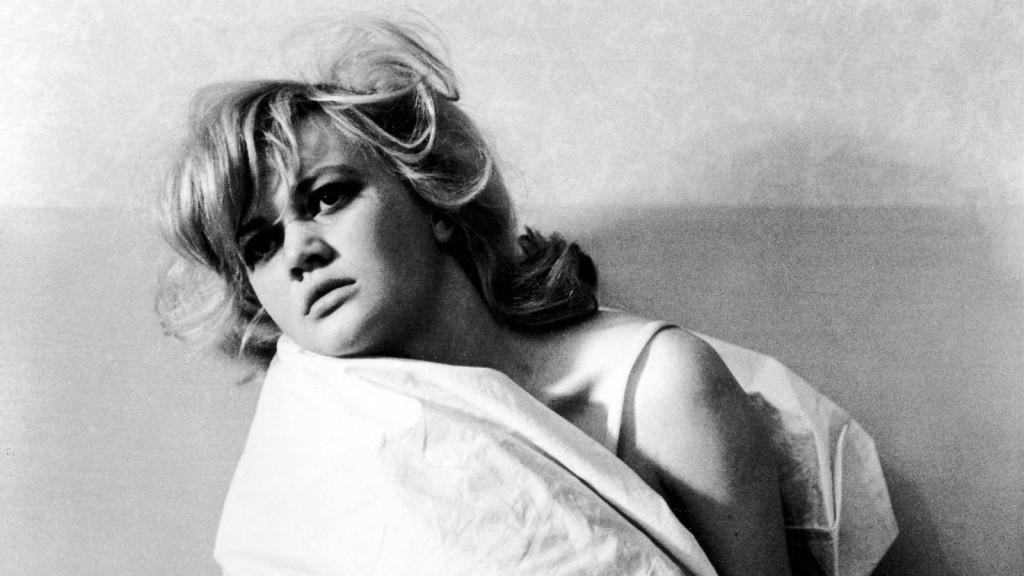 Hana Brejchova plays Andula, the eponymous blonde, who is one of the many young girls condemned to work in a provincial shoe factory — situated in a small industrial town named ‘Zruc’ —  in order to meet the needs of their country’s economic plan. Andula is impulsive like any other youngster and yearns for an idealized relationship. When we first see her she lies on the dormitory bed and recounts to a girl about her romantic exploits with a young man who has bestowed upon her a ‘diamond ring’. But Andula’s ‘lover’ hasn’t returned for over a month and wonders whether she should go out with a middle-aged army man.

Fulfilling the bored young girls’ sexual needs actually happens to be an important matter for the factory’s director. He can’t allow a decline in production just because the girls are sad and alone. Since the town’s ratio of women to men is greatly mismatched at 16:1, the cunning factory director persuades the army to move a garrison of men to the town. The girls eagerly await the arrival of troops in the train station. Alas, regiments of balding reserve soldiers emerge from the train and marches to the barracks, singing their silly song. Nevertheless in the evening young girls visit crowded dance halls, hoping to get picked up by the men.

Andula and two of her friends sit at a table, who all promptly catches the attention of three coarse middle-aged soldiers. The thought of seducing the exasperated young girls is on the men’s mind. But the pathway to gain sexual pleasures is filled with uncertainties and anxieties. First, the men send a bottle of alcohol to the wrong table, then after dancing with the girls and getting them drunk, they are unsure whether the girl’s comment of ‘walk in the woods’ is a euphemism for sex or not.

Dodging the soldiers, Andula finds herself in the company of a wily and handsome, young pianist Milda (Vladimir Pucholt). What follows is an elaborate build-up to sex. Milda gradually seduces Andula and the young woman kind of allows herself to be seduced. Milda uses the excuse of teaching self-defense to lustfully embrace Andula and to tire her out. She gives in to him and looks at Milda’s nakedness from behind her bare shoulder, while he is involved in a battle with the window shade that won’t allow them to be intimate in the darkness.

Eventually, Milda pounces on Andula and the girl over-taken by the effects of sexual bliss proclaims that she ‘trusts him more than anyone’. And Forman abruptly cuts to the couple’s post-coital conversation (which contains one of the beautiful shots in the film). In fact, when this drawn-out sequence ends we can see this was not about sex, but it’s about capturing Andula’s tentative feelings as she tries to find love within the hapless surroundings.

The final act of the narrative chronicles Andula’s attempt to find refuge with Milda, only to discover the young man’s world-weary, distant father (Josef Sebanek) and over-bearing mother (Milada Jezkova). The staging that provides maximum space for de-dramatised interactions leads to heartbreaking as well as strangely funny moments. 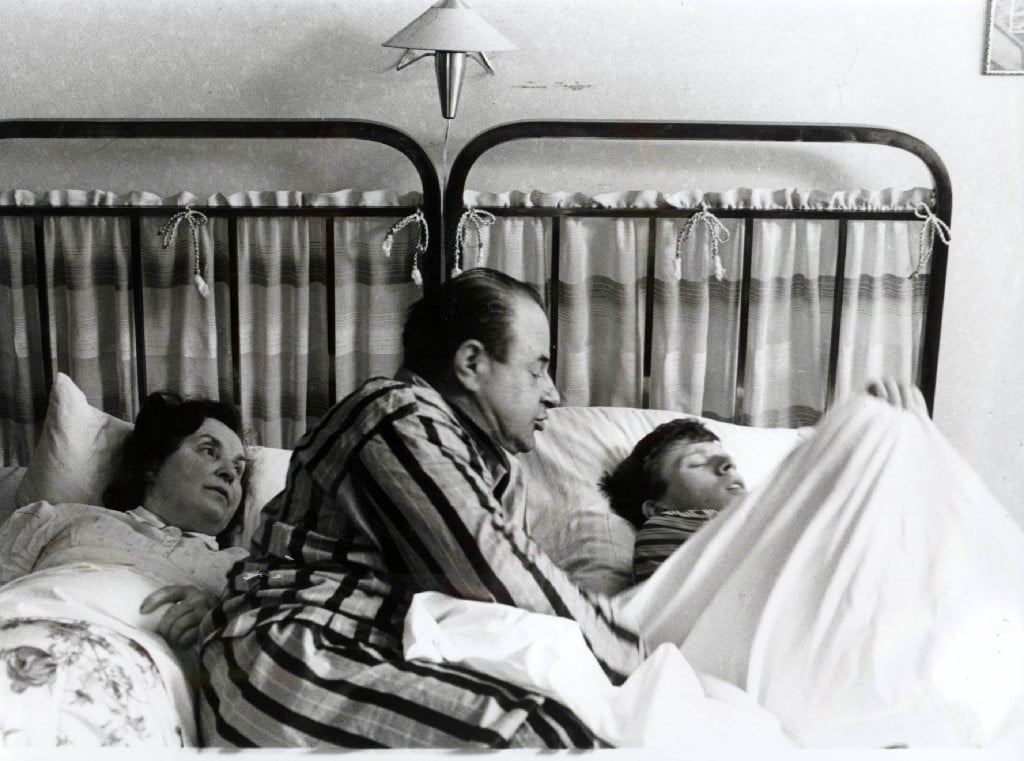 Dave Kehr’s criterion essay on the movie assiduously breaks down the narrative’s episodic, freewheeling structure. “Loves of a Blonde breaks down into three acts, each of which could stand alone as a short story. …Over the course of the three acts, the film’s context evolves from social satire (set in a public space) to emotional intimacy (confined to the private space of a single room and a single bed) to domestic drama (set in the awkward private-public space of a family apartment). The thematic shifts reflect the shifts in setting: The first section is centered on youth and infinite possibility; the second on young adulthood and romantic fulfillment; the third on maturity and inevitable disappointment….” the critic remarks. Furthermore, the film’s stifled melancholic tone makes a great impact on the viewers because all three vignettes invoke casual cruelty and emotional authenticity in a very true-to-life manner. Although the writing is very well defined, what makes ‘Loves of a Blonde’ a memorable girl-meets-boy cinema is director Forman’s emphasis on situations, and his predilection to intimately observe the actors’ face and gestures during the interactions.

Milos Forman is brilliant at treading between the elegiac and hilarious tone. This is very evident in the scene Andula listens to a quarrel between Milda and his parents at their home. We laugh at the pettiness of the people inside the room and feel bad for this utterly isolated girl weeping on the other side of the door. The tone is also reflected in the way Forman opens and ends the film: a catchy yet silly song sets up Andula’s romantic idealism whereas a melancholic tune, in the end, suggests the girl’s shattered expectations.

The flawlessness of cinematographer Ondricek’s compositions plus the luminous close-ups (Hana Brejchova’s face is a marvel which gracefully projects the hope and pensive sadness adds to the spellbinding visual experience). The film’s political edge isn’t as deep as Forman’s allegory on the ‘clowns in uniforms’ in his masterpiece, Firemen’s Bell (1967). Yet the youth union meeting scene stands as an astute portrait of tyrannical authority. A female warden of the girls’ dormitory addresses the group on chastity which only exposes the authority’s hypocrisy and demand for subservient behavior. When the warden asks the girls to raise their hand if they vow to stay chaste, Andula doesn’t put up hers. Nevertheless, the climate of conformism doesn’t provide her the chance to rebel. The political/social establishment meets the workers’ transitory carnal desires even though the raging soul remains locked with no possibility of respite.

Altogether, Loves of a Blonde (85 minutes) may somehow fall under the romance and comedy genre, but it has nothing to do with that insipid and superficial signifier: rom-com.

Wade In The Water [2019] Review: The Curious case of proxy Revenge & Self-atonement