“The tragic paradox of the electoral route to authoritarianism is that democracy’s assassins use the very institutions of democracy—gradually, subtly, and even legally—to kill it.” These words from the book ‘How Democracies Die’, written in the climate of shock and disillusionment after Donald Trump’s victory, finds its echo all over the world as the slyly kindled wave of nationalist rage alongside the rise of far-right is relentlessly dividing the general populace into two irreconcilable groups.

People in power are not just trying to defeat their political rivals in a democratic manner, but have gained the temerity to question the relevance and legitimacy of opposition parties or different ideologies. The words like ‘restraint’ and ‘mutual tolerance’ has no meaning in these authoritarianism-tinged democracies, where the nexus of corporate media, the political establishment, and big business duly manipulate the public to emit war-cries and to voluntarily surrender the rule of law.

Brazilian documentarian Petra Costa’s complex and cautionary Netflix original documentary, The Edge of Democracy (2019) addresses the imperceptible yet persistent erosion of democracy in her native country. Petra Costa is the maker of two lyrical documentaries (‘Elena’ and ‘Olmo & the Seagull’) which astoundingly blurred the lines between fiction and non-fiction.

While her previous two documentaries are a very intimate portrait of insecure women, with Edge of Democracy she takes a sweeping look at the controversies surrounding Brazil’s contemporary politics. At the same time, Costa also observes how the current paradoxes in Brazilian politics seem to ‘run through her family’, since her parents were radical political activists dissenting against the military dictatorship (1964-1985), whereas her construction firm-owning maternal grandparents were part of the oligarchic system. 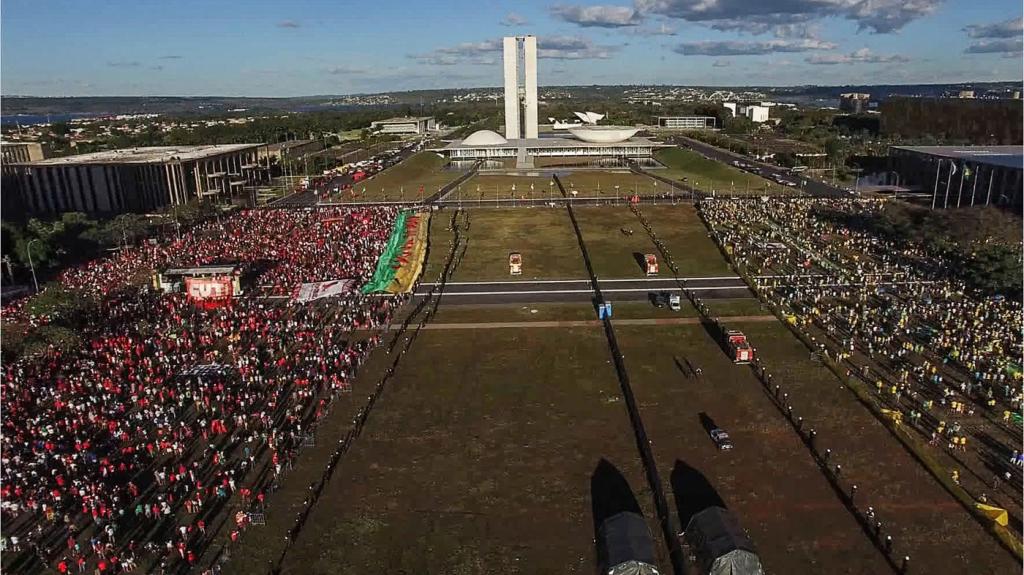 A former Brazilian President is jailed on corruption charges, another is impeached, and an ultra-conservative man with a soft spot for dictatorship is installed as the country’s new President. Petra Costa methodically dissects and contextualizes how these shocking political transformations came into play.

Identifying herself as roughly the same age as Brazilian democracy, Costa covers decades of Brazilian history, starting from the rise of the Workers’ Party (PT) under Luiz Inacio Lula da Silva. Lula, a former labour union organizer, contested in the Presidential elections since 1989, but ascended to power only in 2003, after forging a realpolitik partnership with the centre-right Brazilian Democratic Movement (PMDB).

Corruption charges were levelled against Lula for his allegedly illegal deals with construction companies and regarding campaign financing. Nevertheless, Lula’s regime was lauded for the policies to combat poverty and keep inflation and debt in check. He enjoyed unprecedented popularity and left office in 2010 with an approval rating of more than 80 per cent (we see the footage of Obama introducing Lula as the ‘world’s most popular politician’).

Lula was succeeded by his protégé, Dilma Rousseff, a left-wing activist who in the 1970s was jailed and tortured by the military dictatorship. Dilma’s administration kept its partnership with PMDB, the Vice-President Michel Temer hailed from that party. But when Rousseff started working against the interests of big business and banks, a corruption narrative was peddled by Brazil’s plutocratic media system. Yet Rousseff emerged triumphant in the 2014 general elections. And that’s when the diabolical nexus of backroom operatives, elite class, media oligarchs, and extremists started their campaign for impeachment, despite her victory at the ballot box. While the Brazilian media exhibited to rest of the world a simple narrative of angry citizens protesting against corruption-tainted President, it had nefarious motives.

Petra Costa’s documentary doesn’t overlook the veracity of corruption charges aimed at Lula and Rousseff. It acknowledges that the Presidents have failed in breaking up the systemic corruption. But corruption simply remains a pretext for their opposers to reclaim power through undemocratic means. It is now widely known that neither Judge Sergio Moro (led the investigations of ‘Petrobras Scandal’, dubbed as ‘Operation Car Wash’) nor the house speaker Eduardo Cunha (lead the campaign for Rousseff’s impeachment) are the crusaders of justice as advertised by the domestic press.

Costa depicts how their myopic view of delivering justice only targeted the Workers Party Presidents without producing any strong evidence (while also concealing the prosecution-side malpractices). Only a year after Rousseff’s impeachment, corruption charges were brought against the interim President Temer. However, the shameless politicians in Congress voted against the investigation of Temer.

The Edge of Democracy doesn’t extrapolate or theorize its stance based on some anonymous reports or detailed behind-the-screens investigation. The evidence is already in front of our eyes and it simply connects the dots. Still, it’s a daunting task in this age of misinformation. It is in our inability to properly contextualize each contemporary political event within the larger and omnipresent narrative of money and power allows these overtly partial media outlets and fringe political groups to circularize their two-dimensional, self-serving views.

Furthermore, these tactics dangerously weaponize a section of the populace by evoking nationalist and religious fervour.  Although the complexity of corruption scandals and the rivalry between the political parties documented here couldn’t be easily grasped by those without an idea of Brazil’s history, the chronicle of democracy in disarray is very familiar. The principal players and the political landscape may vary, but it’s always about restricting the distribution of power and wealth.

Petra Costa (and her cinematographer Joao Atala) has had great access to the key players of the documentary: Lula and Dilma Rousseff. Dilma had been in the same prison as Costa’s mother, and the ex-President casually chats about the immense freedom they had in hiding and being anonymous. These constant evocations of family connections, particular to the liberal left-wing political establishment don’t actually impart a tone of journalistic film-making.

In fact, the film-maker doesn’t feign objectivity. Yet, her camera travels keenly follows all the key political players even though she doesn’t agree with them. “They call me rude, homophobic, racist, but I’m a hero”, claims Jair Bolsonaro (to Petra Costa), the retired military officer and current Brazilian President, rightly dubbed as ‘Brazil’s Donald Trump’. Costa’s uniformly vibrant images also often cause the feeling of being in the moment. Be it the slow, sweeping drone shots of Brazilian Parliament or the raw, handheld shots of protests and armed forces retaliation, the film-maker deftly juggles between a combination of visceral immediacy and calm contemplation.

Overall, The Edge of Democracy (121 minutes) is a must-see cautionary tale on the continuing triumph of authoritarian and deeply partisan politics.

Stream The Edge of Democracy on Netflix