Home»Reviews»Films This Week»Helmet [2021] Review: A Film on a Serious Issue; But Too Blunt to be Taken Seriously
Films This Week/Reviews/Zee5

Helmet [2021] Review: A Film on a Serious Issue; But Too Blunt to be Taken Seriously

Helmet (2021) Zee5 Review: There has certainly been a surge of social issue-driven comedies in Bollywood for the past couple of years. Ayushmann Khurrana has seemingly become the name that would come to the forefront when it comes to such films; which started with his breakthrough as a leading man in Vicky Donor, a film with sperm donation at the center of it, and continued with many others such as Shubh Mangal Saavdhan (Erectile dysfunction), Badhaai Ho (Unplanned pregnancy at an older age) et cetera.

But, not all such ventures have borne fruit. Luka Chhupi, the Kartik Aryan-Kriti Sanon starrer, comes to mind where lack of nuance muddles the very topic that the film wants to highlight. Much like these less than fair results of this bandwagon; Zee5’s latest, Satram Ramani directed Helmet, featuring Ayushmann’s brother Aparshakti as the leading man, fails to lift off from the ‘offbeat’ premise it chose.

Related to Helmet – Hutatma ZEE5 Series Review: Minds behind the blood and rage

For such premises to work, it needs a certain level of subtlety to make the story, and thus the film, realistic and coherent, instead of ludicrous and barely delving below the surface. Films like these are not expected to be a visual marvel or a cinematic revelation. These films are as strong as their story and its attempt to address the unusual, the unplanned, and the less-talked-about ‘issue’; which more often than not, is an issue only here in the subcontinent.
Ramani and co-writer, Gopal Mudhane, chose condoms and the general Indian, or maybe subcontinental, the stigma around the usage of these contraceptive devices. It is a somewhat novel idea to build a comedy upon. Because we, the Indian society, have not quite collectively moved to pass the childlike notion of sniggering at anything and everything related to sex. But, the opportunity was squandered by the filled-to-the-brim-with-tropes and mostly meandering script.

The story is set in a small town in UP, as they often do in such films. Lucky (Aparshakti) loves Rupali (Pranutan Bahl), but Rupali’s rich and moderately powerful father (Ashish Vidyarthi) is not too fond of the match, to say the least; as rich fathers often are in such films. Lucky’s earnings as a lead singer in the wedding band clearly are not enough to mollify Rupali’s father. Such basic Bollywood-ish premise of a romantic story is intercut with scenes showing how difficult it is for the authorities and NGOs to talk to commoners about sex and the usage of condoms. One scene featuring a highly obtrusive and leering pharmacist establishes how purchasing a condom in a crowded store is a source of shame for many. 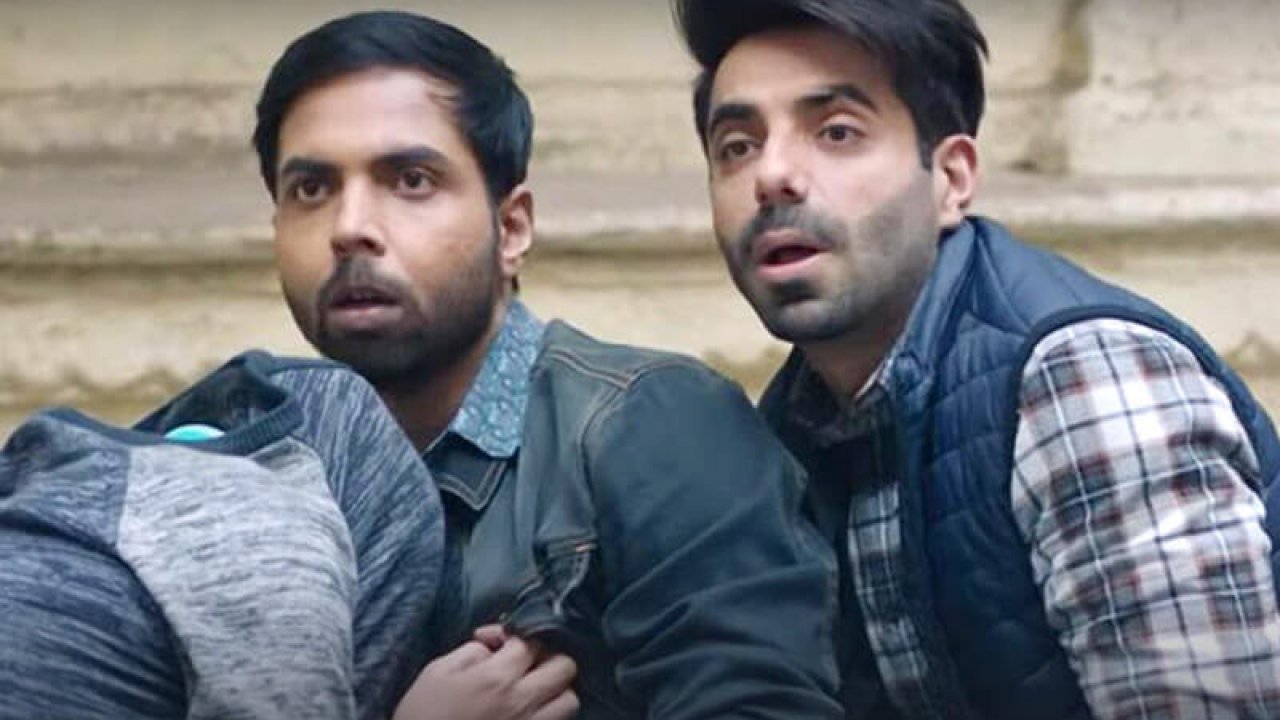 Under the umbrella of this ‘issue’, the story moves ahead. Lucky, with his friends, tries to earn a quick buck, as a bargaining chip with his girlfriend’s father. They do so by robbing a truck, which they have thought to be containing expensive mobile phones; but for story progression’s sake, is revealed to be containing, you guess right, condoms. Boxes and boxes of it. They then come up with an elaborate plan to sell those condoms without making the buyers feel ashamed. The story keeps the ‘robbing the truck’ part as Chekov’s gun which predictably would be the point of climactic conflict.

The problem with the script is not the idea, or the comedic circumstances it tries to create. There are some moments that would make one chuckle. However, the script fails to commit to one thing. It tries to juggle many topics; the aforementioned ‘condom problem’, the love between the leads, the actually pertinent message of sexual awareness. The lack of balance in all these avenues that the film tries to charter on made it a jumbled mess.

The inconsistencies in the characterization are also quite blatant. For someone who felt the shame of the contraceptive and vanity in denial of its importance, Lucky’s awakening to the societal need of prostitutes and their safety from STDs was extremely abrupt, to say the least. The film does take the ‘preachy’ route often. Most of the other characters are not well etched either.

Aparshakti Khurana’s sincere efforts, much like his elder brother, were not enough to put the film back on track. Amongst the supporting cast, Abhishek Banerjee and Ashish Verma do their job well, as Lucky’s friends in crime. Pranutan Bahl was stuck in a stock girlfriend role in form of Rupali. The rest of the cast, with limited screen time, get their job done.

But, when the film ends with an extremely optimistic, hunky-dory, and frankly blunt ending, you would almost instantly forget the efforts put in the first place. Speaking of being forgettable, a Bollywood film of this genre relies on its songs a lot; and no song, with their random usage, would leave a mark. Helmet will have to go down as a film with good intention, brushing on important topic; but eventually an unremarkable film with uncut story and unrefined direction.

Helmet is now streaming on Zee5

3 Films that Gambling Lovers Should Watch

Helmet [2021] Review: A Film on a Serious Issue; But Too Blunt to be Taken Seriously