The best thing about Hutatma, a ZEE5 series of 7-episodes inspired by the Samyukta Maharashtra Movement, is that it isn’t inclined towards taking any stand. Even if the trailer might give away that feeling, it is rooted in reasons behind their rebellion. In today’s world where language-based politics is taking rise while being equally outdated, this is a daring attempt in trying to contextualize the motivations behind their demands. What may seem like an anti-government script at first glance is keener on its responsibility in explaining the incitements. And it does that with giving more than one perspective to ponder over.

No matter which side we are on, Hutatma shouldn’t be dismissed as propaganda which it clearly isn’t. History, which is often told by a single or rather biased point-of-view, doesn’t dwell into the minds that contribute to shaping it. It presents the incidents as facts and gives morals accordingly. This series, as explained in an interview by the creator (Jayprad Desai) himself, presents characters which represent certain ideologies. They are, to be taken as the representations, and not an actual character or happenings around it.  While it also features real-life characters like Pralhad Keshav Atre, Yashwantrao Chavan, Pandit Nehru among others, the series is a mix of fictional and real incidents from the past. 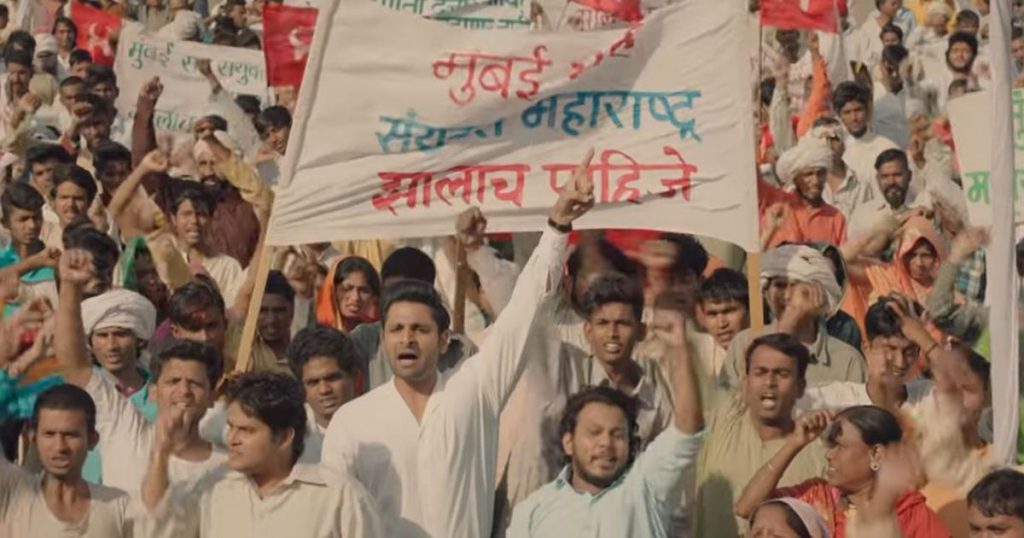 The first episode starts with riot where the police-firing killed 15 protestors near Flora Fountain from Mumbai, which is now known as a Hutatma Chowk. The story further revolves around Vidyut (played by Anjali Patil) whose father is shown to be killed in the incident. The father, who was not even a part of their rally, gets killed without any fault. He is shown to be an honest worker who wasn’t particularly keen on taking any sides; which is precisely why his death affects Vidyut who was largely apolitical and naïve at the time. She was this starry-eyed lady in her twenties, who wasn’t particularly shy but was living without a clear ambition. This incident makes her restless with a vengeful rage. She becomes a rebel without a cause or at least with a cause no bigger than her own loss.

We meet Shrirang, a young reporter played by Abhay Mahajan, whose idealism goes against working for a newspaper that isn’t always pro-movement. Then we meet Abhay (Vaibhav Tatvavadi), a young leader of the communist philosophy, who is fighting for what the labours largely believed in. Conflicts arise when the way of approach diversifies between the communists, which creates a divide between the ones who preferred violence and the others like Abhay who believed in ideologies and the non-violent ways. Other characters involve a respected news editor (Sachin Khedekar), a social worker (Lokesh Gupte) and two other intellectuals played by revered actors Mohan Agashe & Vikram Gokhale.

Vidyut, instead of mourning for her father’s death, decides to go on a hunt for the killer. While fuelling with revenge, her character meets with a social activist Malini Sawant (Ashwini Kalsekar); who was quite mindful about the results of violence. While her struggle was initially to get justice for her father, her motives broaden when she sees others suffering from being subjected to unnecessary brutality. Her juggling ideologies while looking for a purpose to get justice for her father continues throughout. Meanwhile, we get to witness the political climate at the time with a ground-level perspective. Atre, Nehru, Karve, Chavan, Desai and other political leaders make appearances in between yet the essence of their personalities don’t seem to have lost in translation. Just look at Acharya Atre (Anand Ingle) speak in front of judges with the obvious wit and charisma.

Loosely based on Meena Deshpande’s novel by the same name, Hutatma clearly succeeds in taut storytelling with a clear idea of what it wants to say. The narrative is so engrossing that you never get bored with the characters. Even if it narrates a bunch of its intense moments with melodrama, the tragedy behind the characters feels well-earned for the most part. Characters are hardly criticized by the writer and are projected in greys without submitting to hagiography from any side.

The cinematography was very neat with the lights that compliment well-suited production design. I loved how it never submitted itself to a higher tonal contrast which would have created drama by itself. The concise framing helped to bring out the narrative even better. Acting performances were clearly a stand-out among other aspects, by each and every one. The three young rebellions from the poster, performed by Patil, Tatvavadi, and Mahajan shine in their roles with sincerity. Even the veterans were reliable as ever. It’s an absolute treat to watch them perform weighty lines with absolute ease. Ashwini Kalsekar and Chhaya Kadam were fitting in their respective roles.

The clear stand-out performances, for me, were by Sachin Khedekar and Kiran Khoje. Sachin Khedekar absolutely kills it whenever he’s on the screen. If he can do it with such a small role with very few lines and more silences, he will be scene-stealer in the further seasons. Kiran Khoje, who I hadn’t seen except in ‘Hunterrr’, has a much meatier role as Lila albeit of being a supporting one. Her firm persona breaks down while seeing her love in the hospital, and she is ravishing enacting both. I wish to see much more from these two.

The exposition through the flashbacks does feel unnecessary at times; especially when there is enough tension to tell the narrative and the actors have enough potential. But there’s so much to admire in this web-series that it went way beyond my expectations. I sincerely hope it sustains this grip over its intentions further.

House of Hummingbird [2019]: 'Tribeca' Review - Of Growth and Resilience through Self-created shells