Beauty has always been subjected to controversies on how it is often perceived. The measures to determine have changed rapidly over the course of time. Still, some of the notions haven’t changed, and their roots have been based on the morals set by a patriarchal society. ‘Flesh Out’ tells a similar tale of an expected standard of the physical body but on the other extreme. ‘Flesh Out’ is based on a tradition called gavage, where the bride-to-be has to gain weight and look voluptuous in order to get married. The film is set in Mauritania, where a voluptuous body is considered as a sign of beauty, by their beliefs. Basing a story on ‘force-eating’ to attain a beauty-standard opposed to the western ideas is extremely interesting and challenging one.

Verida, the protagonist of this film, is in her twenties and works at a salon. Played by Verida Beitta Ahmed Deiche, her personal struggle to go through the same experience at a young age reflects in her nuanced performance. Her exposure to the outer-world through social media made her a progressive thinker and a liberal person. So the force-feeding after her engagement feels more than torture to her. She couldn’t believe in a faith that doesn’t let her live by her own decisions. Everyone around her seems to be going through the same ordeal, where meal seems disgusting, clearly shown through the frames. Despite knowing how sad this tradition is, her elders seem to focus on blindly following it and suggest her to do the same. After all, that’s how they would have survived through their lives. 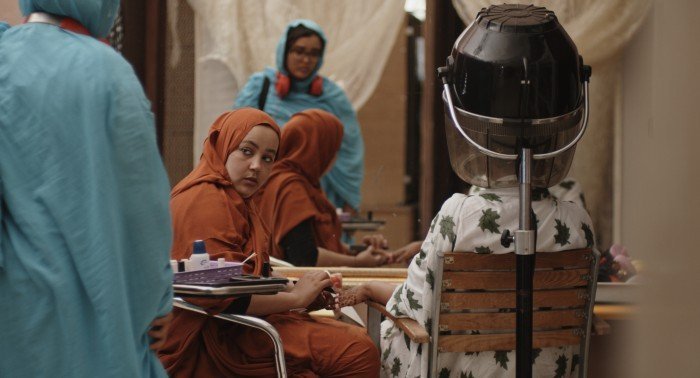 These forced ideals aren’t something Verida could live with. Her friend Amal (Amal Saab Bouh Omar), who is shown to be a divorcee, is someone who makes her look at another side of life. Shown with her headphones almost all the time, she is the modern outlook for Verida who is surrounded by repressed thoughts. Her other friend who’s an outsider to their world is shown to be a person reflecting western beauty standards, where being thinner is considered beautiful. Through this journey, Verida gets to be with different voices, the ones who give her comfort to the ones who make her follow the customs for her own good.

Despite standing on a compelling premise, Flesh Out never seem to be more than what I have already told. Its neatly shot frames don’t serve any more purpose. The biggest flaw of this film is that it stops at its basic concept. It never reaches the level of intimacy where we get to know the psychological nuances behind their agony. It rather focuses on showing the cruelties as happenings. The makers seem to have made it on merely a thread, which makes it seem more distant. Even when it tries to get closer with narrative, like the time where she is shown to be driving a car while Sidi (the boy she likes) sings along the song while sitting next to her; it further exemplifies how unknown the territory is to the director.

And the feminist message Flesh Out tries to convey doesn’t feel strong enough when the story feels more focused on commenting on the culture than the freedom itself. There are no dramatic moments where we get to see her rebellious rigger. Not that the flow it has is a bad choice. But it hardly conveys any deeper insights of the character’s mind that it manages to create merely an aversion for the torture they have to go through. I just wish it had been a universal tale that it so badly wanted to be.

‘FLESH OUT’ HAD IT’S PREMIERE AT THE 2019 TRIBECA FILM FESTIVAL. CLICK HERE FOR OUR COMPLETE TRIBECA COVERAGE.

Hutatma ZEE5 Series Review: Minds behind the blood and rage