Hari Sama’s new film This is not Berlin examines a particular period in Mexico’s society from the perspective of teenagers. The film deals with a culture that is being thrown at 17-year-olds at a breakneck speed. This is not Berlin touches upon a number of themes, all aimed at capturing the transformation of adolescent kids into young adults when they are subjected to the politics and the revolutions of the world, they call home.

The opening shot of the film has Carlos (Xabiani Ponce de León), our protagonist, standing blank and aimless as a number of schoolboys are brawling around him. The scene instantly reminded me of the ‘rumble’ in Francis Ford Coppola’s The Outsiders. The year is 1986, it’s the time for the Football World Cup and the film presents Mexico through the ever-evolving eyes of Carlos. He is rather indifferent to the schoolboy rivalry and fights. I mention Coppola’s film because I noticed some similarity in the way Carlos and Pony Boy in The outsiders used to see their respective worlds. 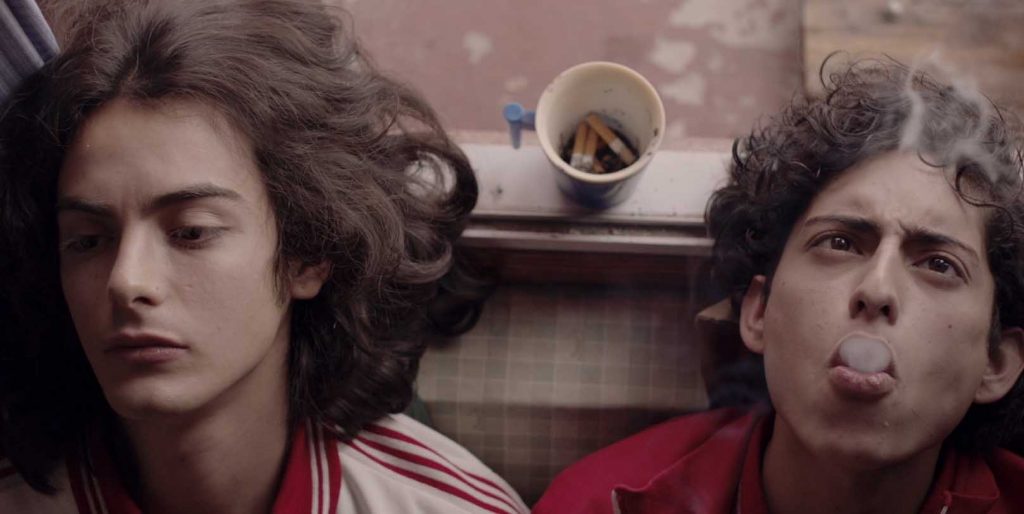 Carlos finds solace in slacking with Gera (José Antonio Toledano), his best friend. He is secretly in love with Gera’s older Sister, the uber cool punk rock band artist, Rita. He also has an Uncle (Hari Sama) for a role model, who is the sole taker of the boy and his world. Carlos has homegrown engineering skills and he uses it to make cool items such as a doll which can smoke. His relationship between his mother (Oscar nominee Marina de Tevira) is visibly troubled and there is always an unsaid clash between the two. That is pretty much everything his life is, at the moment.

Carlos and Gera are curious teenagers, wanting to consume everything they can, literally and figuratively. After helping Rita by fixing the band’s broken synthesizer, the two teenagers make an entry to the Azteca, a night club, nothing short of a mythical land for an adolescent. Azteca becomes the first-hand experience of sex, drugs and booze for the clueless, ignorant of the world they live in, kids. This experience turns out to be the fold in their lives which define who (or what) they will become from it.

This is not Berlin has some shocking imagery of art that appears every now and then. These images are shocking and brilliant in equal measures. There are scenes of performance art in what we can call an underground movement led by Nico (Mauro Sanchez Navarro). Nico is leading an artistically inclined movement of gender liberation and his movement speaks of repression of the weak and the poor. Nico’s movement allegedly draws inspiration from Europe as a character criticizes him for aping Europe and Berlin. Even though this shocking imagery acts as a social commentary on the tyranny of the weak and does speak volume about the pansexuality, the film endorses, it also takes some liberty and at times look unnecessary and merely a tool to make the film look artistically provocative.

Hari Sama presents the community of performance artists as pretentious and phoney, but his main focus is on how these things appear to be fascinating enough for a 17-year-old and what he takes from it. The revolution in display intimidates the protagonist to a point that it is tough to turn his eyes the other way. This is not Berlin was immaculately portraying the significance of the movement it endorses and at another end, it does critique its vices, the pretence and the insincerity that comes with it. But the balance of the two wasn’t all even and often confused me about what it truly wants to say on the movement.

Gera and Carlos both get affected by this underground movement in different ways, one finds out about his sexuality while the other is just enjoying the power, just being part of it, brings to his personality. Gera and Carlos are mere outsiders of the society they are part of. This is not Berlin is about teenagers seeking a sense of belonging and the revolution is just an excuse for them to find who they really are or what they want to become in life.

‘THIS IS NOT BERLIN’ HAD IT’S PREMIERE AT THE 2019 TRIBECA FILM FESTIVAL.
CLICK HERE FOR OUR COMPLETE TRIBECA COVERAGE.

Quentin Tarantino Returns To The Palme d'Or Race, 25 years after winning it for Pulp Fiction