Change is inevitable. We can mock the previous generations for holding on to the last few values they grew up with or for hoarding the memorabilia that have a special place in their heart all we want. But when the sands of time turn on us, and we become the older generation, we’ll find ourselves facing a similar dilemma. And it is the alternative that we choose that will define our very existence. On one hand, we can opt for nostalgia, and end up being an outcast. On the other hand, we can accept what’s coming our way or find a middle ground between traditionalism and modernization in order to ensure that we at least make it to the footnotes of our personal history. Luzzu (2021) is an examination of the struggle of choosing between these tough options.

Written and directed by Alex Camilleri, Luzzu follows Jesmark (Jesmark Scicluna) as he struggles to stay afloat in the fishing business because of his hatred towards the fishing industry that is destroying the seabed and his attachment to his family boat. And while his wife Denise (Michela Farrugia) accommodates Jesmark’s whims, it becomes significantly difficult when they find that their newborn son Aiden is facing some growth problems. Now, after finding out that there is an opening to earn big in the black market of the profession he’s in, thereby giving his family some stability, he has to choose whether he’s going to hold on to his luzzu and watch his son and wife suffer. Or if he’s going to ride the tide of capitalistic change so that they at least have food on their table and a roof over their head.

Luzzu boasts of some smart cinematography, courtesy of DOP Léo Lefèvre. Its color palette is primarily made of blue, red, and yellow, i.e. the colors of the luzzu. Therefore, whenever either of those shades pops up on-screen, we are reminded of the place where Jesmark’s heart lies. Only the color blue serves two polar opposite purposes. Blue is the color of the ocean. Hence, it reflects feelings of freedom, openness, and is a reminder of Jesmark’s family history. But blue is also used to signify what Jesmark considers a corrupt way of life. So, we see it appear in the rear end of the fishing market where all the black-market deals are done. And we also see the color towering over the oceanic horizon in the form of the blue shipping containers. However, the movie’s visual storytelling truly peaks during the luzzu’s decommissioning sequence. 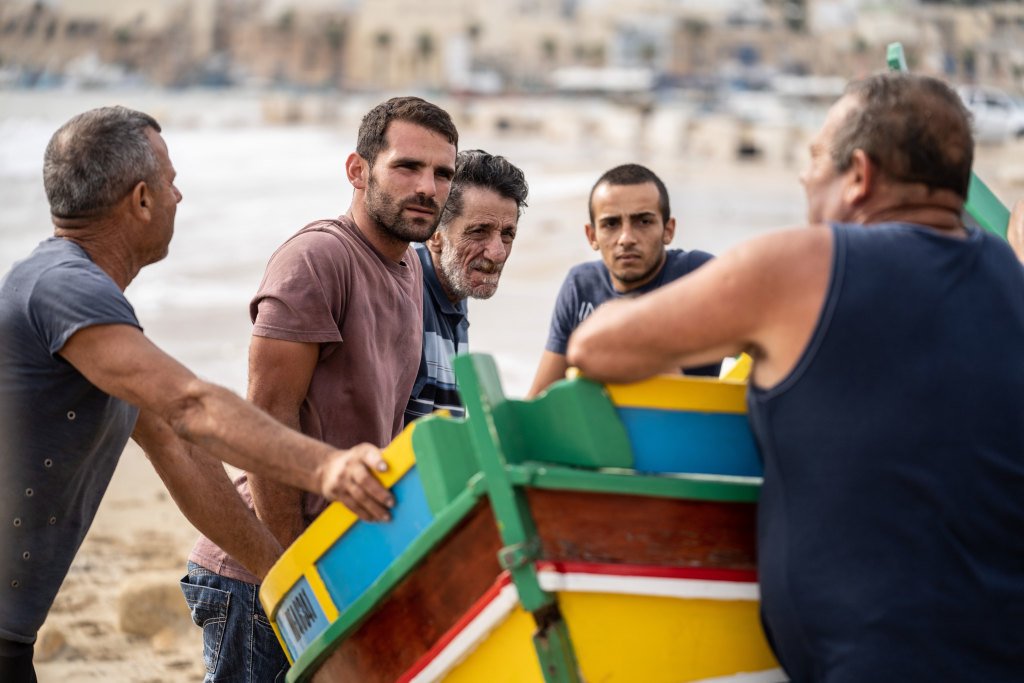 Camilleri, along with Lefèvre, hugely focuses on eyes throughout the movie with the help of close-ups and extreme close-ups. In a particularly brilliant scene between Jesmark and his friend, the subtext is aptly elevated by focusing on Jesmark’s efforts to not let his eyes blurt out the truth that his mouth cannot. This technique is cranked up to the maximum to tug at the viewer’s heartstrings during the final stage of Jesmark’s transformation as Camilleri cuts to the eyes on the luzzu, almost anthropomorphizing it. And as if that’s not enough to turn you into a sobbing mess, Camilleri cuts between these perfectly framed shots of the other luzzus that are about to be decommissioned, to make it seem that they are communicating, crying for help, and then accepting their fate.

Talking about boats and fishing, Jesmark’s journey has Biblical connotations. It’s indicated by Jesmark and his family’s religious beliefs being rooted in Christianity. And it’s furthered by the fact that he’s a fisherman i.e. the profession that Jesus Christ’s first two followers belonged to. But here’s the surprising thing. Throughout Luzzu, it’s kind of hinted that Jesmark’s traditional fishing techniques are actually taking him away from the path (and assistance) of his God. It is only through the acceptance of these modern (dishonest) techniques that he gets closer to Him, something that is not-so-subtly confirmed through the Baptism scene. So, is the movie saying that with the times, even God has started to side with those who aren’t traditionalists? You decide.

Since we are on the topic of mythology, there’s another interesting reference. It’s based on the Greek legend of the Ship of Theseus, which Jesmark refers to while wondering if he’s the same person anymore since so many parts of his identity have been changed due to capitalism. That statement is subverted by the final frame, which shows that something as crooked as capitalism can only change the way you earn money. But if you don’t want it to change you as a person, it won’t.

Additionally, there are some other subversions going on in Luzzu, with the most apparent one being the gender stereotypes. Typically, Denise and her mother Carmen (Frida Cauchi) would be the jilted female figures who are trying to stifle Jesmark’s individuality and destroy his values. And Jesmark would be this tragic figure who isn’t getting enough appreciation for trying to “provide” for his family. But Camilleri presents Denise and Carmen as the voices of reason who can understand the reality of their town and act accordingly. 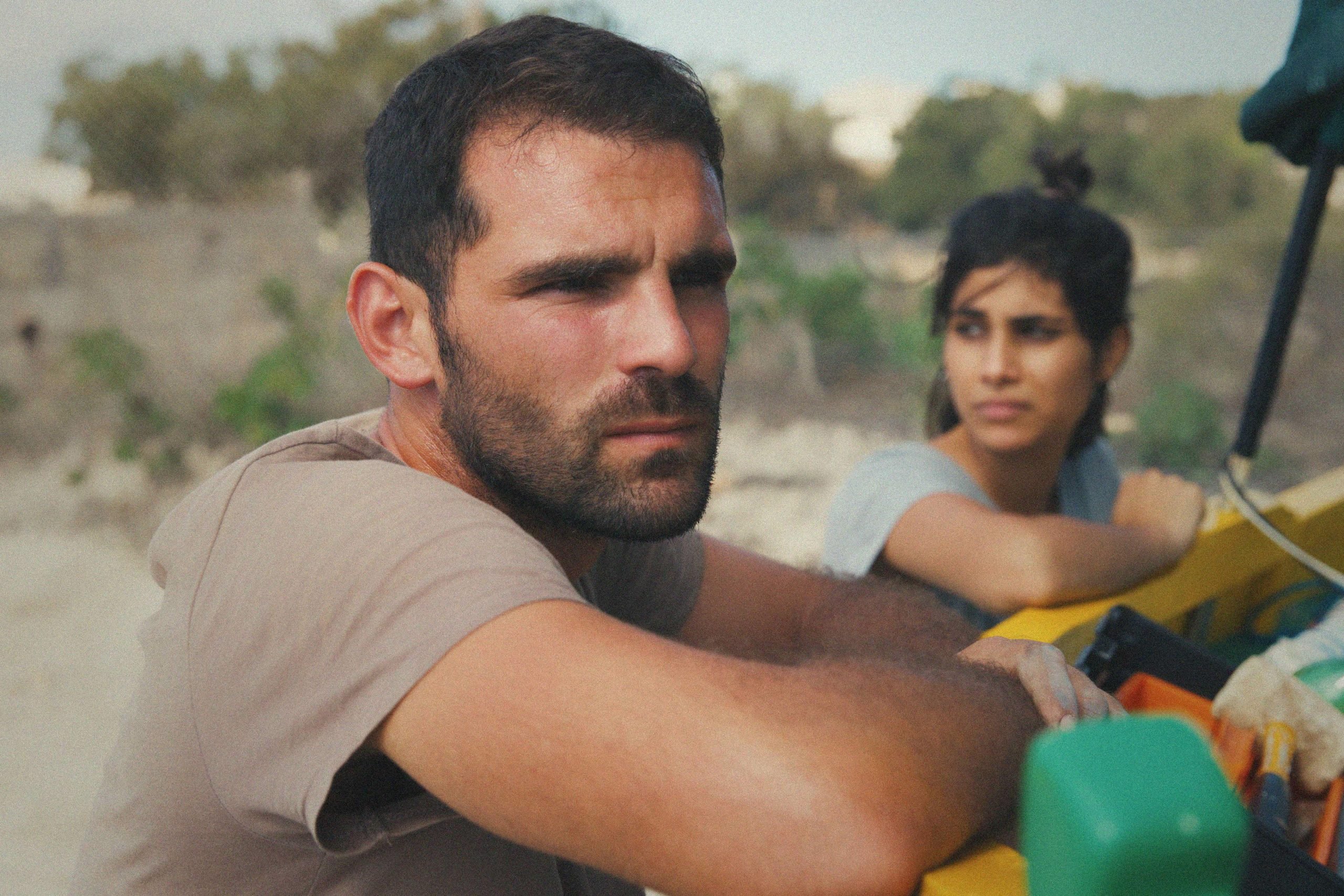 Actually, it’s Jesmark who comes off as bull-headed and irresponsible as he keeps dreaming of this ideal scenario that was probably lived by his father, grandfather, and his great-grandfather. However, the truth is that that is not going to happen in this climate. Especially when there’s a kid and a family involved. The bottom line is that if you want idealism, don’t be a family person. If you want to be a family person, let go of idealism. No one’s saying that is a good rule-of-thumb. It’s just the reality we live in.

In conclusion, Luzzu is a fantastically made film by Alex Camilleri, which comments on fishing communities, traditionalism, capitalism, global warming, and more through the eyes of the people who are trying to navigate through this mess. And it is accentuated by the work of the cast, which is apparently made of non-actors and professional actors, and crew. The movie has been acquired by Kino Lorber for a wider release. So, whatever you do, don’t miss Luzzu when it is released theatrically and/or digitally.

Luzzu was screened at the 2021 Helsinki International Film Festival

The 10 Best James Bond Movies of All Time