Ridham has used the infamous myth of ‘Sacred Mountain’ among the Gaddi Shepherds and has incorporated it into the film by creating a fable that jumps between real and metaphysical realms.

Films like ‘The Gold-Laden Sheep and The Sacred Mountain’ remind me why I fell in love with this beautiful medium of cinema in the first place. It challenged me, showed me the possibilities of what cinema can be, and reinforced my belief that good filmmaking stems from nothing but a strong urge to express. Collating everything that happens in the film and jotting it down in few hundred words is a difficult task because nothing much happens in the film, and yet a lot happens once the film gets over. It may sound like an oxymoronic clichéd statement but believe me, this is the only first impression that I can gather after the first watch.

After the screening of his debut film at Dharamsala International Film Festival, Ridham Janve mentioned in QnA that he didn’t want to create ‘postcard’ images of the Himalayas that we’ve seen in every travel show, rather he wanted to portray the nature in its real form – cruel and gentle at the same time. This statement sums up the whole film. The crux of the film lies in capturing the essence of being at the highlands, habituating for the most part of your life in the Himalayas. It’s a very distant space from the civilization where the eventual sense of alienation creeps up and you realize that you’re left on your own. 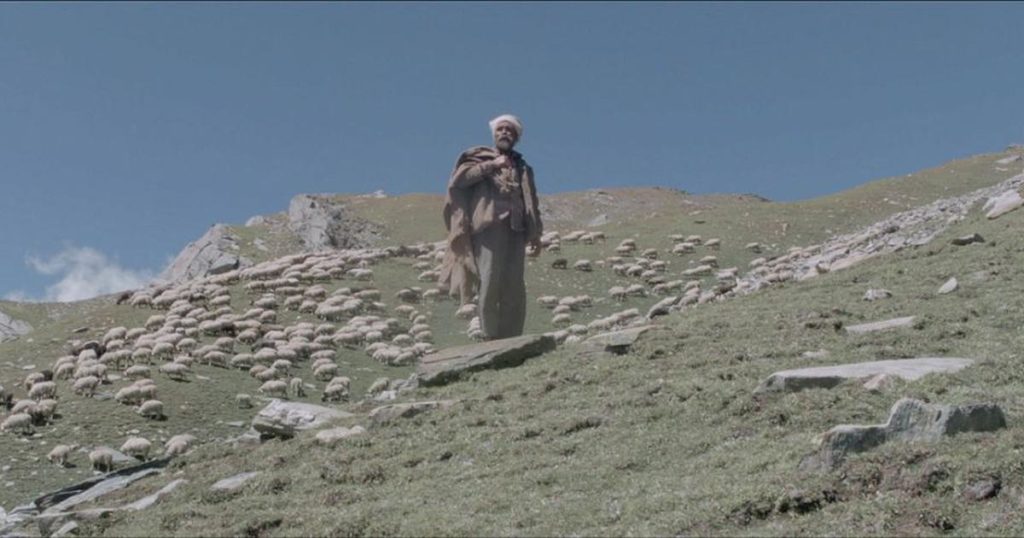 The film succeeds by using very long takes of the mountains, shepherds herding their sheep, and the dramatic changes in the weather. In a long static shot, a character, appearing underpowered and almost diminished by the vast expanse of the rough mountains, walks from the right side of the frame to left. Sounds Tarkovsky much? Yes, it has got a very Tarkovskian treatment and I was reminded of Stalker a lot but still, it is a very unique work and a very rare gem to have come out of India.

Ridham has used the infamous myth of ‘Sacred Mountain’ among the Gaddi Shepherds and has incorporated it into the film by creating a fable that jumps between real and metaphysical realms. A jet plane crashes in the mountains and the news about the gold and silver aboard on the aircraft spreads like a wildfire. It sets our protagonist Arjun, a shepherd, on a mysterious journey. Fearing the consequences of heading to the ‘Sacred Mountain’ with an impure conscience is the heat of the talk among the Shepherds. According to them, many have not come back yet who had traveled the less traveled path. However, the film does not delve into what may or may not lie in the ‘Sacred Mountain’ but uses this myth to incite an intrigue. The never-ending ascent of the mountains leads to the places that are so isolated that you might never get out of there. Like being stuck in a big labyrinth.

The use of non-actors and opting for the shepherds of the mountains to be projected on the screen provides a very documentary feel to the film as it keeps blurring the line between fiction and non-fiction. Throughout its runtime, the film uses long silences with a very atmospheric sound design. The slow pace of the film doesn’t hinder at all and makes it even more rewarding to watch. The loose plot present in the film acts only as a catalyst that instigates the sensory experience of the brain to do the rest of the work. The director himself trekked a lot in the mountains and met every single shepherd of the region before making this film. He also learned the gaddi language to get a gist of the local dialect. No surprise that such kind of work is coming out of a person like him.

‘The Sacred Mountain’ is cinematic experience at its best form and it will be a cardinal sin to watch this film on a smartphone, laptop or tablet.