Based on Vinoy Thomas’s story and S. Hareesh’s screenplay, Churuli opens with a poem/proverb on how a gentle god, a patient, god, a kind god, and a benevolent god will treat a mouseling and how long they’ll take to finish it. But the most dangerous of them all is the Lord of Time because it’s in no hurry at all. Then it transitions into a gorgeously animated prelude about a monk travelling through a forest, attempting to capture the phantom Perumadan.

After losing his way, he finds a strange ball on the ground, which he picks up and puts in his basket so that he can give it to his kids. However, that ball turns out to be Perumadan disguised as an ant-eater who proceeds to trap the monk in a loop, making him walk for eternity in the forest. After that, we are thrusted into the live-action version of the story told through the perspective of two undercover police officers, Antony (Chemban Vinod Jose) and Shajivan (Vinay Forrt), who are traveling to Churuli to nab a criminal called Joy (Soubin Shahir). 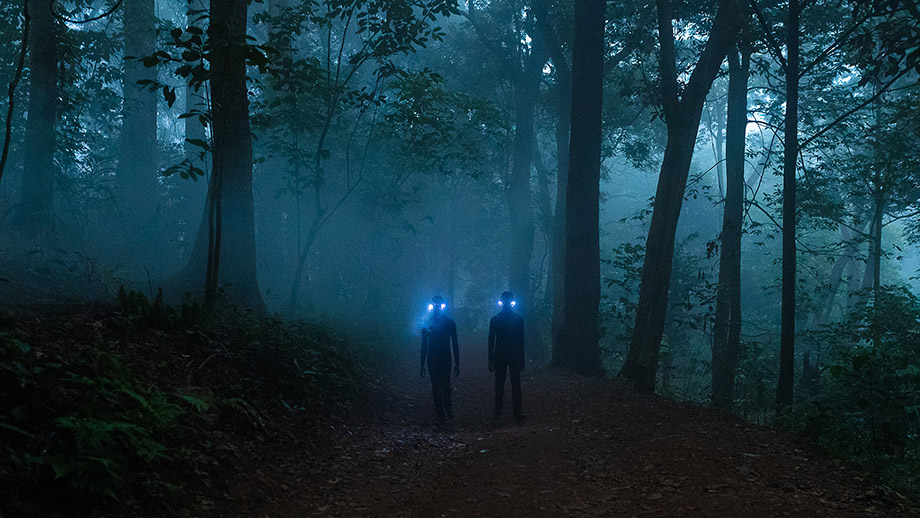 Now, the one thing that should be abundantly clear: Churuli is not Jallikattu 2.0. This is not a fast-paced, edge-of-the-seat, action-thriller with a biting social commentary. Actually, it’s quite the opposite. The story, much like the recurring symbol of a spiral, unfolds slowly, taking you far away from reality and into fantasy. Yes, there is some commentary, but it is hidden within the twists and turns of Thomas’s, Hareesh’s, and Pellissery’s serpentine storytelling. So, by the time you get to its audacious and mind-boggling ending, you will be somewhat prepared for it.

The movie has a very literal spot, a wooden bridge, on the way to Churuli that appears at the 16-minute mark where it asks the audience to suspend disbelief. Because after crossing it, there is a drastic shift in tone and how the characters around Antony and Shajivan act. Why? The only explanation that’s given is that Churuli isn’t an ordinary place. If you cannot accept that, just like the characters, you’ve to take the longer route to immerse yourself into the movie’s magical realism.

Although Pellissery, with the help of cinematographer Madhu Neelakandan, editor Deepu Joseph, production designer Gokuldas, composer Sreeraj Saji, and the VFX teams, Momo and Eunoians, creates a hypnotic and heavy atmosphere, he manages to keep you tethered to the narrative through Antony and Shajivan (brilliantly acted by Jose and Forrt). Because from the first scene they appear in to the last scene of the movie, all they are doing is finding a criminal.

They aren’t in this mess because they want to introspect about their place in life or wonder about the shifting power dynamic between them or whether the police are the real criminals because they contort the law in order to do things that are as heinous or more heinous than the people they’re arresting. They just want to get the job done. Every time Antony or Shajivan reminds themselves about their mission, they aren’t just recalibrating themselves but us, the audience as well. And that’s precisely the thing that grounds their journey while allowing the themes around them to be visualized in the weirdest ways possible.

Churuli is unquestionably one of the best-looking and best-sounding movies of 2021. It’s difficult to say whether all the fog that we see on-screen is real or not. But it is convincing as hell, thereby making the village feel like it’s someone’s dreamscape. Major props to sound designer Renganaath Ravee and sound mixer Fasal A. Backer for keeping track of the ambient sound and throwing us off the said track by warbling dialogues or overlapping echoes from other scenes when you least expect it. 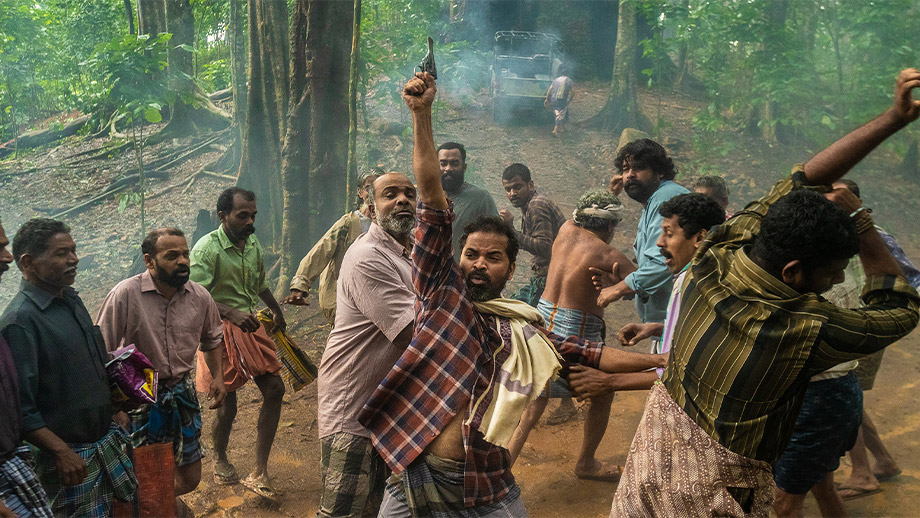 Look out for the one where Shajivan gets chased around by an elderly woman. It will seem like a case of improper dialogue mixing but given that woman’s place in the plot, it’s very intentional. Also, it most definitely belongs to the folk horror sub-genre as it repurposes legends like the Theechamundi, mixes religious symbolism with spirals reminiscent of Junji Ito’s Uzumaki (1998-1999), and generates fear through its separation from modern society. Hence, after a point Churuli (the movie and the place in the movie) starts to feel like an entity unaffected by time, pushing its characters towards self-acceptance to achieve some form of autonomy over one’s life.

In conclusion, Churuli is a slow-burn trip that demands every bit of your attention. In terms of folk horror, it is closer to let’s say Ben Wheatley’s In The Earth (2021) or David Bruckner’s The Ritual (2017) than Ari Aster’s Midsommar (2019). Churuli isn’t concerned with answering the questions on its overall setting. Instead, it is obsessed with putting certain stereotypes and ideas that dominate the ground-level discourse to the test in front of the very embodiment of time.

There’s no doubt that it will attract a bunch of theories. And if it doesn’t, it should. But Pellissery and his writers deal with the characters, story, and themes in a conclusive manner before the credits roll while leaving enough room for interpretation. Like the phantom Perumadan, Churuli tries to distract you with its visuals, sounds, and non-linear editing. If you fall into its trap, you’ll probably lose yourself. If you don’t, you’ll be rewarded with goosebumps during its triumphant finale.

Churuli was screened at the 2021 Tokyo Internation Film Festival