A Nuanced Portrayal of Queerness in Badhaai Do (2022): Bollywood hasn’t been a fertile hotbed for exploring queer characters in the recent past despite its humble efforts at queer representation in commercial cinema. When Shubh Mangal Zyada Saavdhan was released in 2020, Ayushmann Khurana wore a pride flag as a cape and stood atop the guard rails to proclaim his love to his lover’s family. The audience applauded the nature of such love and the hero’s gym-trained physique; the film scored hugely among the mainstream audience for being a ‘brave’ attempt at exposing homophobia existing in Indian society. However, it was so busy trying to reclaim the heteronormative tropes of romance existent in popular Bollywood cinema (remember the Dilwale Dulhania Le Jayenge scene reclamation that marked the teaser and the trailer of this film and created a sensation?) that it watered down the struggles of the closeted queer folks. Every other film – Ek Ladki ko Dekha to Aisa Laga (2019), Kapoor and Sons (2016), Chandigarh Kare Ashiqui (2021), among others – are no-doubt generous efforts at portraying a closeted queer character but they don’t go an extra mile to add nuance to it.

In each of these films, the queerness of the character almost exclusively becomes their governing identity or the character needs the intervention of a heteronormative person to gently nudge them (if not push them, that is) out of the closet. All of this, until I watched the character of Shardul Thakur, played by Rajkumar Rao, unfold in Badhaai Do, a recent release that seeks to explore the concept of lavender marriage and queer acceptance in Indian society. As a cishet woman, I write this essay with an honest understanding of the problematic portrayal of a queer character by a cishet actor. However, the arc of this character, fantastically conceptualised by writers Suman Adhikary, Akshat Ghildial, and Harshavarshan Kulkarni, deserves its fair share of discussions. I must also mention here that I am going to use the pronouns ‘he’ and ‘she’ for referring to the queer protagonists, Shardul and Sumi respectively, in the course of this essay.

To begin to understand the nuance around this character, we need to first gauge his socio-political position in the film. Shardul Thakur is an upper-caste man from a typical middle-class joint family with its roots in the semi-urban, North Indian culture. He wanted to become a bodybuilder, and worked hard to that extent, but when fate offers him a government job after the demise of his father (who was in the army), he willingly takes it up. Now, he is a policeman posted in the women’s police station at Dehradun – the only ‘male’ cop in the vicinity, as is pointed out by one of the women officers at the station. Shardul is finely roped in the markers of masculinity to the world – a police officer, a bodybuilder, and a responsible son to a martyred father. Only, he is queer, and he knows it, but he just can’t talk about it. 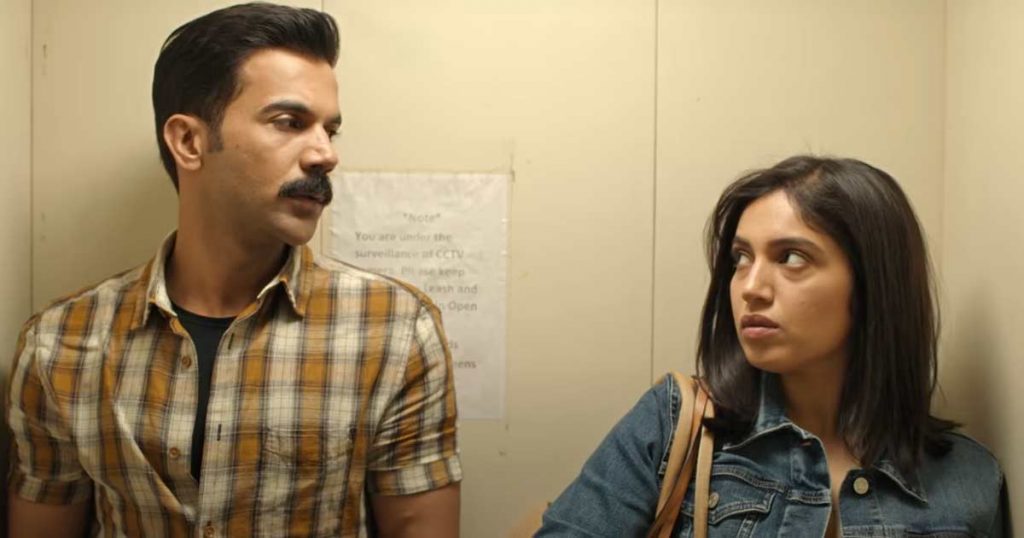 It would have been easy to mistake him for a roadside-Romeo character when he proposes marriage to Sumi, played by Bhumi Pednekar until he manages to speak out – awkward hand gestures giving way to speech – that he is not sexually attracted to women. In fact, it is Sumi who first mentions the word ‘gay’ in relation to him and is immediately hushed for her choice of word.

Soon enough, we come to know that Shardul has been in a closeted relationship with Kabir for the last three years. The obvious question arises – How did he manage to keep it a secret? ‘Badhaai Do’ helps answer the same. From waiting for his lover to show up at their honeymoon hotel to taking a day off to exclusively spend time with him at a resort, he seems to go the distance in love to maintain secrecy about his affairs and his identity. However, he is careful to not overstep the boundary of friendliness with his lover(s) in public spaces. He also prefers to not bring Kabir home, an issue that bugs him when Sumi’s girlfriend, Rimjhim, played by Chum Darang, moves in with her into their house at the police colony. Shardul had initially chosen an apartment for themselves on the outskirts of Dehradun so that they can rid themselves of the heteronormative gaze and live their queer lives with more freedom. It is not too difficult to ascertain from these instances that Shardul, a man in his thirties, had developed an understanding and acceptance of the hetero-norm in public spaces. The private space, for him, is distinctly marked by homonormativity and, consequently, freedom.

Check out – The 25 Best Hindi Movies streaming on Netflix

Adding more layers to the character, Shardul is evidently a believer in the patriarchal codes of the heteronormative marriage, calling it their ‘sanskar’. In an instance, when the DSP of the Police and his wife visit them in their new home at the police quarters, Shardul tames his tonality to secure for himself the image of the patriarchal, cishet husband in front of them; while before Sumi, he explains the need to keep a tough exterior to appear like a ‘real married couple’. The game of pretence only escalates from here, Shardul being more insistent and adept at it than Sumi. When pressurised for the conception of a child, Shardul finds it convenient to tell his family that it is his wife, Sumi, who is infertile. It seems like the easy way out to blame for their situation upon his wife. In fact, in a turn of events, when Shardul is fabricated as the infertile one in their relationship, the family, I am sure sadly, accepts him and allows them to adopt a child. I could not help but wonder, at this point, whether the acceptance would have come this easily if we stuck to Sumi’s infertility. The answer is simple – No. Shardul can get away with it because he is a ‘man’, queer or otherwise.

I must add here that his North Indian upbringing doesn’t allow him to be too liberal in his outlook towards Sumi’s partner, an issue that becomes a problematic, recurring joke with him as he keeps pronouncing Rimjim’s name as Timtim throughout the film. Sorry, it isn’t funny; quite the opposite. Further, his choice of Sumi as a prospective bride for him is governed by the reasons that she belongs to an upper-caste family with ancestral heritage in Uttar Pradesh, apart from her queer identity. I am, in no way, trying to defend him for these. In fact, one of the better things about the portrayal of this side of his character is that it doesn’t shy away from its flaws. He is a queer man, alright, but there’s also a lot more to him than just his sexuality.

If you look closely, like I did, you will be able to spot a hint at the coming-of-age about his queerness in a set of scenes where Shardul and Sumi are talking about their queer lives and choices in the public space. When they are conversing in the bazaar area, Shardul is constantly trying to hush Sumi from talking about it. In another scene, where Shardul is conversing with Sumi in the playground about their queerness, he moulds the words into acceptable topics of conversation in public whenever his paths cross with other people. At least, he is not hushing his queerness down anymore.

I almost thought that the character would get away without coming clear about his queerness to his family when Shardul tells Sumi after she is discovered in an intimate moment with her partner by her mother-in-law that she must not tell his truth to her family. I almost thought that here we will see the power relations topple down – a queer female being cornered by society for trying to live her life with freedom. Soon enough, Shardul is defending his family’s mean judgements against Sumi and, in the process of telling them that queer people are not animals but just another human being, he comes in the clear about his own queerness. What follows is a heart-wrenching scene where Shardul leaves the room to come to the terrace and is seen gasping for breath. It is not so difficult to correlate the feeling of being stifled about his sexuality for almost one and thirty long years under a semi-urban, middle-class, patriarchal, heteronormative, North Indian upbringing. The choking for air, the tears, the breaking down on the phone with Sumi as he tells her that he is out of the closet now help hold up a mirror to the process of coming out that several queers have confessed to and no Bollywood film has ever adequately paid attention to. However, he is yet to take his queerness to the pubic space – on the streets and into his role as a police officer. The writers of ‘Badhaai Do’ do not disappoint. When a pride parade is passing by him while he is on duty, he spots his wife with her partner and his partner encouraging him to participate in the same. His public and private identities are threatened for collision. He is, evidently, torn between jumping into the tablo and standing on the side. He makes a choice so distinct, and so effusively performed by the maestro of acting that Rajkumar Rao is, that he wins over the hearts of the audience. I partook in the excitement of the moment by standing up and clapping my hands in a theatre full of a chirpy audience when he wears a pride mask and lets his arms jingle to the beats – a public statement of his queerness and a signal of solidarity by an authoritarian figure of the state towards the queer community. The latter is a bigger deal, according to me, at this moment, considering the Indian state is still at loggerheads with the queer community about their rights.

If we look at the power dynamics between the two queer protagonists from Gayle Rubin’s Charmed Circle point of view, Shardul and Sumi are both at an arms’ length from the privileged centre. However, Shardul’s privilege is more pronounced than Sumi’s on the ground of their gender. In the aforementioned pride march, Sumi is quick to wear a masque to disguise herself in front of the police officers around Shardul. She is, after all, Shardul’s legally married wife and is more than aware of the consequences that the truth around her sexuality could stir up in her husband’s professional life – a little detail, among many others, that I could not stop thinking about long after the movie had ended.

By the end, with Shardul asking Guru, his partner, to come to take a seat beside him at the puja for his adopted child with Sumi, we know that his character has changed considerably. Shardul can, now, voice his queerness with confidence (if not pride). Rarely has a Bollywood film made such an effort at lending insight into the lives of queer people with such fine attention to the numerous social-political factors governing their identity? I sincerely hope that filmmakers take a cue from ‘Badhaai Do’ and start delving into real-time issues around queerness in mainstream Bollywood cinema now.

10 Romantic Movies To Stream On MUBI This Valentine's Day

Freedom Fight [2022] SonyLIV Review: A deeply affecting Anthology about the Concept of Freedom