By the end of the 20th century, a Spanish director rose to prominence in the USA, whose films were described as highly provocative, tumultuous, and too open-minded, leading to their censorship – NC-17, a rating, forbidding people under 18 from attending screenings. But does the author see his works this way? Certainly, in his filmography, there are characters who are like elements on the screen, appearing in some cases even for a short period of time (Penelope Cruz in “Live Flesh” and “Pain and Glory”), but feel alive, leave an impression. They are not infallible; they act emotionally and hastily and it is their impulsiveness that gives energy to the works of Pedro Almodóvar.

Calling Almodóvar a women’s director sounds cliché, and while such a definition is justified in some of his films, it does not mean it is entirely true. Plus, it doesn’t seem to be an end in itself. The plot, in most cases, involves insecure, repressed in one way or another, people looking for a way to get what they want. However, the conflicts and the characters that shine on the screen are very different, not only in style but also in the genre. Here are some examples: “The Skin I Live In” has a lot of intense horror moments, “Women on the Verge of a Nervous Breakdown” is just the opposite – it takes misery and turns it into a comedy, “Parallel Mothers” does not go beyond the drama, it is very saturated in terms of sensitivity, both the personal and social behavior of Janis and Ana are affected.

The women in Almodóvar’s films are all kinds – hysterical, fragile, screaming, quiet… No matter what category they are part of, they are above all-natural. This includes characters like Lola from “All about my mother”, who changed their gender from man to woman, and instead of being a parody in the background of other women, they are symbols of independence and the continuity of modernity. Although so different, all these ladies have something in common – the atmosphere around them. Almodóvar’s stories are often confined by space, which makes them theatrical and intimate – mostly seen up close to the protagonist’s home. Not only the bathroom, living room, kitchen but also the hallway. These spaces are expected to be decorated by the characters so that they feel “at home” and reveal their true nature there, whether they are surrounded by relatives or friends, or completely abandoned to fight their own demons.

Obviously, colors will be the first thing that is perceived by the viewer and in the context of his expectations, they will change their meaning – red, in which Almodóvar regularly dresses his characters, can be passion and love, but also associated with revenge and evil; blue – hope, but also a mystery; green – youth, vitality, and peace, most often Almodóvar uses it as a background, but this color contains some hypocrisy, especially when not saturated, green looks repulsive. These oppositions affect the eye and cause reactions. It is much easier and faster to get to know the characters not by actions, but by observing what surrounds them. This can sometimes be misleading and manipulative, but in most cases, it is like a colored mirror, reflecting parts of a person’s character. 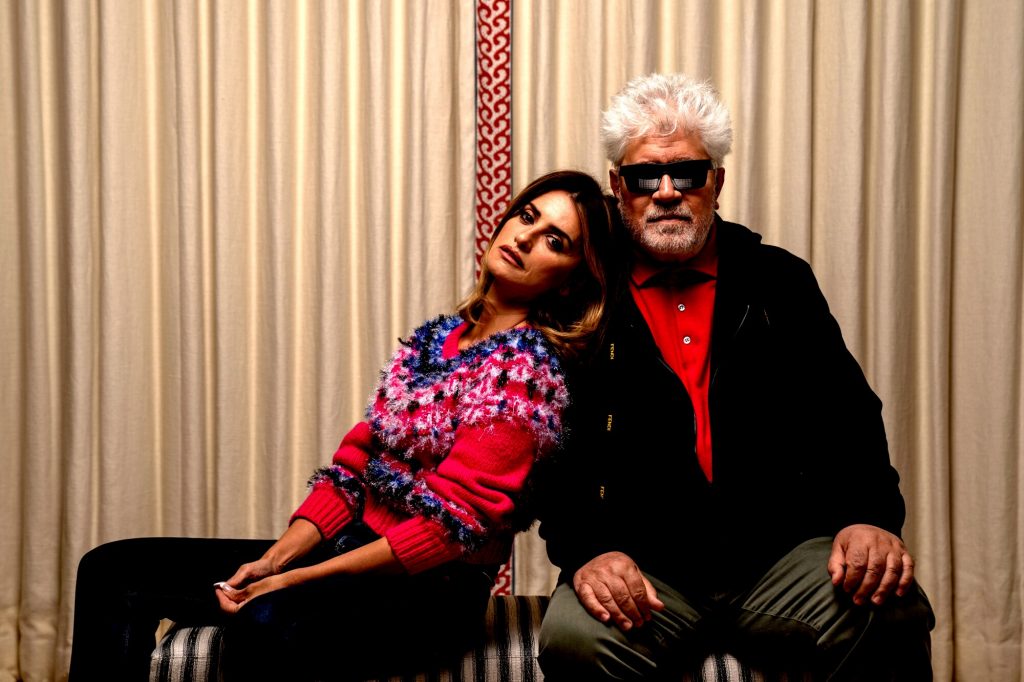 However, the impression made from the first frame of the film or the opening scene remains the frankest. It can intrigue (birth in a bus in “Live Flesh”), soothe (Salvador Mallo, immersed in the pool in “Pain and Glory”), shock (masturbation during watching a slasher in “Matador”), retell within two-three minutes the rest of the film (the monologue of Mateo Blanco’s loneliness and the appearance, at the very beginning, in a few seconds, of the beautiful Penelope Cruz in “Broken Embraces”), the possibilities are endless, but each time the outcome must be one and the same – to grab the viewer’s attention for the rest of the runtime. Whether he makes him cry, laugh, fall in love, be ashamed or be afraid, Pedro Almodóvar knows his films and knows very well what emotions he wants to evoke in the audience.

All this diversity on the screen cleverly misleads; it doesn’t matter in which genre the story will turn because undoubtedly the characters remain close in terms of ideas – vulnerable, obsessed with themselves or another person, at times look so absurd and imperfect that they inexplicably approach painfully close to reality. And despite these characteristics, melodrama in Almodóvar’s work can be seen, but not felt. Aesthetically, the sets in which the characters are released look kitschy, but for the world built by the imagination of the writer/director, they are key by being accepted not only as a trademark but also as an additional enrichment of fiction.

One often sees the use of cultural elements in Almodóvar’s films, which is a hint about his own tastes. However, such references also serve to help the viewer to associate with the character more quickly, whether by inserting of a writer, who is well-known (Truman Capote is used in both “All about my mother” and the short film from 2020, “The Human Voice”) or love for cinema expressed through the mentioning or showing of DVD and cassette collections to show respect for both the audience and the authors of these quality works. This reality, as familiar as it may seem, remains distant.

Almodóvar’s strongest weapons are the supporting characters because they feel underappreciated and are constantly looking for a reason to earn more screentime for themselves. In any of his films, almost everyone around the main character seems capable of depicting an entirely new story only about themselves and speaks as if inviting to get to know them. Despite some usual choices for these roles – Rossi De Palma – these people though looking familiar, are all different in motivation and behavior. They also want to be part of the main conflict in the action. Most of them have anxiety, which is willingly revealed by being filmed voyeuristically by their own creator, whose camera relies on symmetry, style, and emotion. There is no right formula for quality filmmaking; all that is required is talent, passion, obsession with the work, and sunglasses to protect from the incessant flashes of paparazzi photographers.

What to Expect From a Modelling Shoot

Slow (2023): ‘Sundance’ Movie Review – A contemplation on love, intimacy, and companionship amplified through a fluid narration