As second wave of the virus hits us to continue this pandemic which now feels no short of a famine, and as Mrinal Sen’s 98th birthday just passed us by, what can be a better time to re-watch his Akaler Sandhane (1980) In Search Of Famine and get lost in his world of minute observations…

Cinema has been appreciated throughout history as a medium of pure artistic expression. But there are very few instances in which it succeeded to transcend from a mere art form into a visceral experience, an inescapable dream that can strangle you with the most honest yet grotesquely realistic hands so hard you can’t help but scream out in horror of finding yourself in it. Among few others, Mrinal Sen’s film-within-a-film Akaler Sandhane: “In Search Of Famine” is definitely one such instance. Maybe that’s why this self-criticizing masterpiece doesn’t remain simply as Sen’s familiar song of poverty sung to an unfamiliar note, or as a stylistically complex yet thematically unambiguous slice of surrogate reality, but crosses all barriers to also present itself as an overwhelming discussion about art and cinema.

If there’s anything in this universe apart from the polestar that has ironically survived the test of time, then it is the face of poverty. In this world where distribution of wealth seems to be the last priority, every famine is man-made and every death from hunger is a murder. That is exactly why it is difficult to separate the 1943 famine from 1959 or 1971 or for that matter, the famine the film lives in. This is the reason why the lady in the film forced into prostitution can portray the horror of the working lady, Durga (which is ironically the name of a Hindu goddess); the lady living upstairs can identify with the description Smita gives her; and the well-off villagers (who have directly or indirectly used the ’43 famine to their use) don’t want their evil deeds to be portrayed on screen. Cinema is, but an illusion in disguise, and when this illusion can etch the horror of poverty on celluloid, the better half would of course try to resist it. 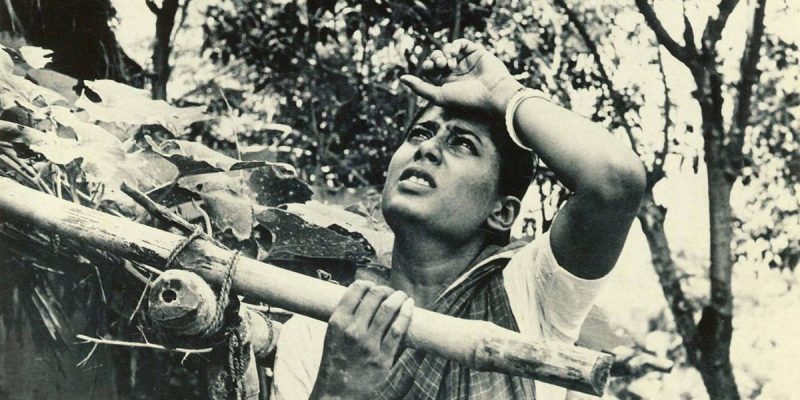 And how is art born? It is a product of the pain and suffering that an artist experiences and expresses. Smita succeeds to surpass Devika as an artist because she (unlike Devika) looks at people’s suffering with her own eyes, she (like Mrinal Sen himself) feels people’s pain as deeply as she can. As the director in the film says, “technique is not enough, you need to feel, you need to earn respect”. And as the director of the film subtly pushes in how Raskolnikov bowing down to a prostitute was his bowing down to the suffering of all humanity. However, few minutes before that, an even stronger story was told. The story of how Chintamani, a prostitute, made a saint out of a flawed man who left his father’s funeral to meet her. If this faith and this devotion were reserved for the lord, he would have attained true salvation. The irony is, a prostitute who once showed a man the path to redemption, is now in search of her own lost dignity.

One of my favorite inputs in this film is the picture of ‘Fasting Buddha’. It is a sculpture of the living skeleton that Siddharta Gautama created out of himself while trying on his spiritual quest, several ascetic practices including starving himself. Now comes up an important question- why would Sen pick this card up in his discussions on famines? Why would he compare one man’s choice with another man’s crisis? Well, according to me, this picture is Sen’s take on subjectivity of art. Buddha’s malnourishment may speak loads to arthoes in air-conditioned houses about spiritual enlightenment, but to a man struck by a famine, it speaks much more about hunger and starvation. This is the scene where Marx meets Jung and Dostoevsky meets Picasso.

Leaving us in 2018, Sen couldn’t experience the plight of thousands of migrant workers walking hundreds of miles and some dying midway in this pandemic simply to reach their own homes. But as it is evident from this film, he understood long ago, quite perfectly, how painful the face of poverty is.