Home»Reviews»Great Films»Akaler Sandhane [1980] Review: A famine from the past and its echoes into the future
Great Films/MUBI

If we talk about Indian filmmakers who have invariably crafted political cinema, Mrinal Sen would appear as the most compelling filmmaker of 20th-century India. None of his equivalents has had a more socialist form of optical storytelling. Akaler Sandhane (In Search of a Famine) is one of his greatest films, and also one of the most important works of India’s parallel cinema movement. And given the constitution of the narrative and fluidity of discourse, it isn’t hard to see why.

A young, exalted director (Dhritiman Chatterjee) arrives in a village with his crew, and the leading actress (Smita Patil) to direct a period drama about the 1943 Bengal famine and the fading humanity in those testing times. He hopes that his film will ‘reveal the problems and privations still current in rural India.’ While he isn’t successful in the end, Mrinal Sen very pertinently and quite subtly brings out the issues with India’s countryside in the end. He tempers the rural settings and then cultivates a refreshingly interesting story about the lack of revisionist judgment these people have.

The most subversive aspect of Akaler Sandhane is that it never shows rural India and its inhabitants in a negative light. The film chooses a meta-narrative so that the art never ensnares itself into obviousness. But when Sen decides not to depict the superstitious and patriarchal nature of the villagers. His form in itself obtains function. The screenplay, which has been written by him and Amalendu Chakravarty, stays much upon the perplexities which embrace the filmmakers out to investigate a cultural identity and the villagers who resist their uncomfortable honesty towards what they are filming. 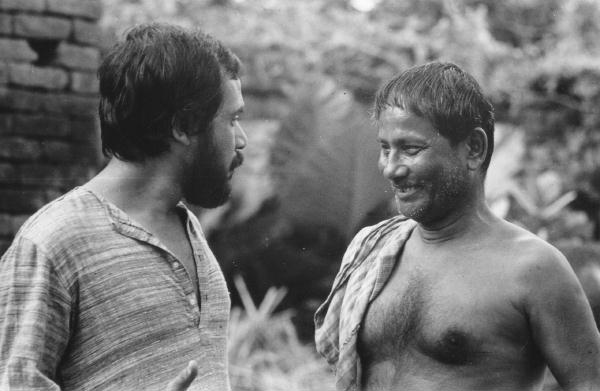 Akaler Sandhane also a film about memories. It is about how they get entrenched into the behavior of even those generations who haven’t experienced those desperate conditions in which their elders lived. The film doesn’t contain the satire and anger of Mrinal Sen’s early works. However, his commentary can’t be more brilliant and insurgent. The cinematic conscience of those devoid of privilege has been expertly articulated by Sen. It stays true to his synchronous vision. He makes an effort to verbalize the poverty and concludes that times might have changed, but the circumstances and depravity haven’t.

Akaler Sandhane benefits from Smita Patil’s wonderful performance. In the film, she plays herself- a successful actress from the city. However, she also has a degree of kindness and sympathy towards the village. This makes her stand out from the rest of the queue. The filmmaker too doesn’t make much of a fuss about things but he opines with reckless metropolitan arrogance. Both of these are characters we are familiar with in real life. However, the matter-of-fact credibility of Patil is an assertion that we lost a remarkable actress, too soon.

RECOMMENDED: PADATIK [1973] MUBI REVIEW – THE SOLITUDE OF A YOUNG REVOLUTIONARY

Akaler Sandhane hasn’t aged perfectly. The running time, which moves past a couple of hours, feels stretched. The expository dialogue and radical conversations feel unreal and too self-aware. This is evident especially in the climax speech which feels heavy and unsubtle at the same time.

It’s unfortunate that forty years on, Akaler Sandhane is as relevant and timely as it was, back when it released. The villagers have wider access to transportation, food and mobile phones. But the lack of awareness, cultural understanding and opportunities remains consistent. Films like these must get made today. We need more honest filmmakers like Mrinal Sen in these times to reveal our truth. Because if art doesn’t, no one will.