Mikio Naruse was one of the eminent masters of classical Japanese cinema who made 80+ films in a career stretching from the silent period to the 1960s. Though he made the most nuanced realist dramas, the lack of a specific visual style in his works didn’t elevate him to the canonical position as awarded to Kenji Mizoguchi and Yasujiro Ozu. Through the perceptive Japanologist Donald Richie’s extolment of Naruse’s post-war works and wide retrospective of Naruse’s films in the 1980s across the West, the film-maker’s mastery gained acknowledgment. When Hirokazu Kore-eda, one of the modern masters who retained the flavors of classical Japanese home dramas was asked how he reacts to being compared to Ozu, he states, “I of course take it as a compliment…But I think that my work is more like Mikio Naruse and Ken Loach” [1].

Naruse predominately worked in the shomin-geki genre – slice-of-life films dealing with the lower-middle class Japanese family. In the pre-war Japanese film industry film-makers like Yasujiro Shimazu, Heinosuke Gosho, and Hiroshi Shimizu made low-key stories of routine life with a simplified yet impactful style. When the American occupation of Japan ended (in 1952), home dramas began to resurface and Naruse was generally credited for reviving shomin-geki genre with his adaptation of Fumiko Hayashi’s unfinished novel, Meshi (Repast, 1951). Fumiko Hayashi was Naruse’s favorite novelists who adapted several of her stories in the 1950s which led to Naruse’s robust postwar comeback. Later in 1962 he made a biopic of Hayashi titled ‘A Wanderer’s Notebook’.

Related to Lightning: The Eternal Breasts [1955] Review – A Portrayal of Female Desires and Creativity that’s Daring for its Time

Catherine Russell, professor of film studies, declares the fourteen films Naruse directed between 1952 and 1958 as the ‘body of work that confirmed his place among the pantheon of great directors, not only nationally, but internationally’ [2]. It is also the phase in Naruse’s career where he worked with people who helped him craft his dramas with utmost nuance and feelings. Sumie Tanaka, Yoko Mizuki, and Toshiro Ide were the three screenwriters Naruse often worked with. But a crucial aspect of the director’s 50s films was the presence of lead actress Hideko Takamine. 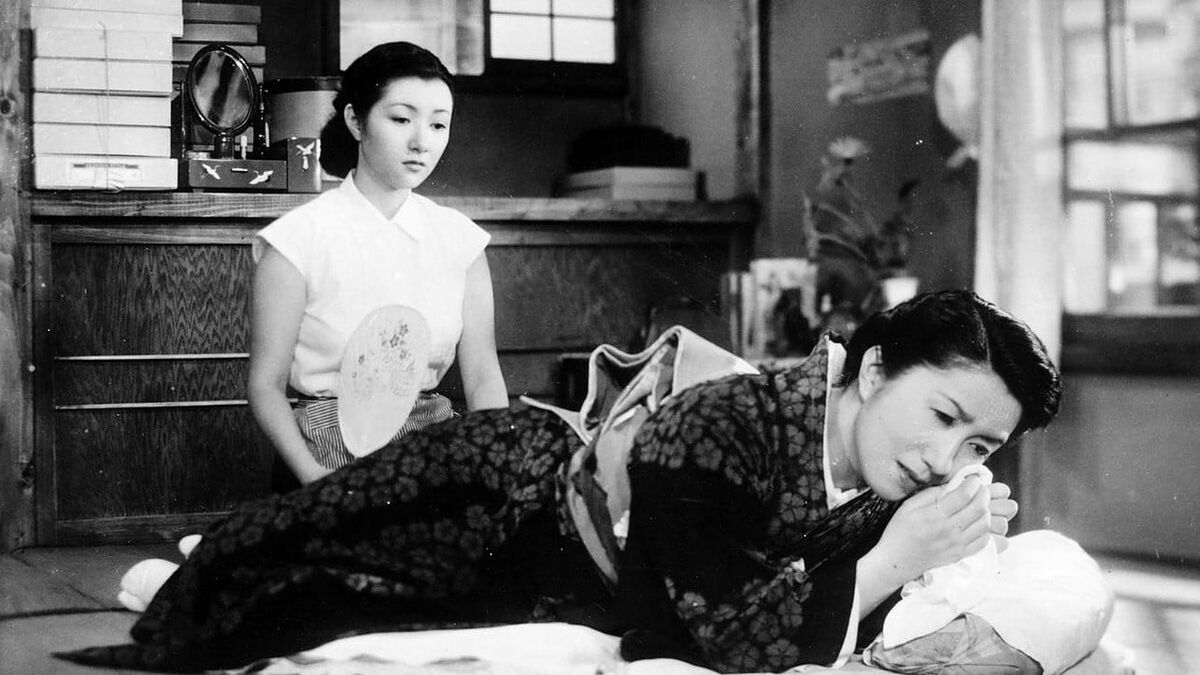 Described as the “the Japanese woman who is not necessarily beautiful in her suffering, but persevering, dedicated and intelligent” [3], Takamine embodied Naruse’s unflinching self-assured woman characters. Daniel Kasman in an essay in Mubi recounts, “She [Takamine] has a conscious, sponge-like presence in Naruse’s films, frowningly absorbing and remaining stained by all the pettiness of a human world, and yet always amazingly, achingly matched by an acute and moving rebellion, the need to persevere, to and continue on” [4].

Although Hideko Takamine first worked with Naruse in his 1941 54-minute film Hideko the Bus Conductor (and later in a minor role in The Descendents of Taro Urashima [1946]), Lightning (Inazuma, 1952) signals the beginning of one of the finest actor-director collaboration. Kinuyo Tanaka, Haruko Sugimura, and the ever-serene Setsuko Hara have all played lead roles in Naruse’s movies. Yet it was Takamine who bestowed great depth, delicacy, and nuance to his characters.

As the Sense of Cinema article indicates, Naruse helped craft Takamine’s multi-layered persona “which concealed sensitivity behind a brash exterior—the blend of toughness and vulnerability was instrumental in making many of his rather coldly observed films humanely moving” [5]. While Naruse’s oeuvre may not match the expectations of radical feminism, his women protagonists were pragmatic, independent, and never give into passive resignation. Takamine perfectly exemplifies such qualities in Lightning which was the director’s second of the six adaptations of Fumiko Hayashi’s stories.

In Inazuma, Takamine plays 23-year-old Ginza resident Kiyoko who works as a conductress on a tour bus. Kiyoko’s mother Osei (Kumeko Urab) has had four children from four different men. Kiyoko is the youngest of the four. She lives in the cramped housing quarters with her half-sister Mitsuko (Mitsuko Miara) and her husband. Kiyoko expresses nothing but contempt towards her other half-sister, Nuiko (Chieko Murata), a self-centered and lascivious woman who wants Kiyoko to marry a manipulative baker (Eitaro Ozawa) with whom Nui later has an extra-marital affair. Mother Osei lives with her good-for-naught war veteran son, Kasuke (Osamu Maruyama) and tries her best to soothe the palpable tension between her children.

Kiyoko has a healthy relationship only with her sister Mitsuko whose husband suddenly dies leaving her with debts. Mitsuko also has to deal with her husband’s mistress and her toddler son. Once the family hears about the insurance money for Mitsuko, they line up with reasons to borrow the money. Perturbed by the great deal of drama unfolding inside her family, Kiyoko determines to be independent and moves out to her own apartment. A young pianist brother-sister who has lost their family to the war lives next door.

The lively music emanating from their place and the interactions with them retains Kiyoko’s hope for the future, although she learns from her mother that the vulgar baker has caused more damage to their family. The narrative ends with a brilliantly dramatized verbal altercation between Kiyoko and her mother. Kiyoko registers how she feels stifled by her family and blames her mother for the chaotic household. The mother cries as the day turns dark and lightning strikes. They, however, reconcile in a matter-of-fact manner and there’s a gracious final image of Kiyoko walking her mother home.

Mikio Naruse’s narratives are known for its ambiguous ending. He would provide no answers to how his heroines are going to fare in a world that’s intrinsically against women’s liberation. Nevertheless, Naruse’s heroines are often active agents pursuing change and progress even though they are aware how the so-called modernity can quash their yearning for independence in different ways. By the end, Kiyoko has moved to the suburbs where her space can’t be intruded. Yet Kiyoko doesn’t come across as the naïve idealist, equating independence with the path out of material poverty.

Kiyoko has now attained full-control of her life and hence the ambiguous end gives us hope that she will stay afloat in this treacherous world. And men are often visualized as intruders (and framed in the corners) in Kiyoko’s world which is perfectly foregrounded in the scenes the two men engage in a violent fight inside the house, and when the shameless baker is denied access to Kiyoko’s mother’s household.

Stylistically, Naruse’s commitment to domestic spaces and street life persists in his 50s works as he imbues more depth and movement to the spaces. He excels at visually articulating the layered nature of community and family, often juggling between various yet distinctly shaded characters. In Lightning, Naruse showcases the drudgery of life in postwar Japan, not only addressing the bitterness and resignation of people but also emphasizing on the extraordinary endurance of his heroine. Similar to Ozu, Naruse (and his writers) perceives the coexistence of the traditional and the modern, the old and the new which is innately present in his mise-en-scene and characterization. For instance, Naruse highlights both the alienation brought upon by the allegedly progressive capitalism and the range of new opportunities it offers to the younger generation.

Naruse captures every contrastive reaction and expression to deepen the subject and structure of the narrative. In Lightning, the sequence where Kiyoko and Mitsuko meet the mistress at her home, and the final mother-daughter scene are best examples of how he conveys their emotional conflicts with great intensity. It is generally stated that the lack of auteurist aesthetics in Naruse’s cinema – compared to that of Ozu or Mizoguchi’s – makes his works less transcendental. While it is true that he doesn’t possess mastery of cinematic style, Naruse’s skillfully constructed imagery and refined structure can be as deeply affecting and existentially haunting as any of those masters’ works.

Overall, Lightning (87 minutes) was one of Mikio Naruse’s mature and significant postwar movies which portrays the entrapment of women within social structures and also the possibility of real changes.