“Mr. Thank You (‘Arigato-san’, 1936) was based on a poignant short story by acclaimed Japanese author Yasunari Kawabata (his short-story was also the basis of 1926 avant-garde silent masterpiece ‘A Page of Madness’).”

Hiroshi Shimizu, like his contemporary Yasujiro Ozu at Shochiku Studios, was alleged to be the most ‘Japanese’ of Japanese film-makers although his works didn’t exactly go through a rediscovery phase as it happened with Ozu’s masterworks and minor classics. As an original visual stylist, Shimizu was the equal of Kenji Mizoguchi, Mikio Naruse, and Ozu. He was best known for his unusual camera placements, location shooting, and use of nonprofessional performers.

The movies Shimizu made in the 1930s had touches of realism and were quiet character dramas that focused on the impactful social changes of the times (palpable undercurrents of melancholy and regret lays beneath the ‘charming’ exterior). Furthermore, Shimizu had the penchant for forging travelogue narrative, and he strengthened his road-movie structure by repeatedly experimenting with lateral tracking camera and extraordinary means of linking shots.  Criterion’s Eclipse Series’ collection (titled ‘Travels with Hiroshi Shimizu’) perfectly acquaints us with Shimizu’s style, which contains the directors’ four pioneering works made between the years 1933 and 1941 — ‘Japanese Girls at the Harbor’, ‘Mr. Thank You’, ‘The Masseurs and a Woman’, and ‘Ornamental Hairpin’.

Mr. Thank You (‘Arigato-san’, 1936) was based on a poignant short story by acclaimed Japanese author Yasunari Kawabata (his short-story was also the basis of 1926 avant-garde silent masterpiece ‘A Page of Madness’). The titular character is a compassionate bus driver (Ken Uehara) who continually and cheerfully thanks people (and animals) for getting out of the way of his small, rickety bus. 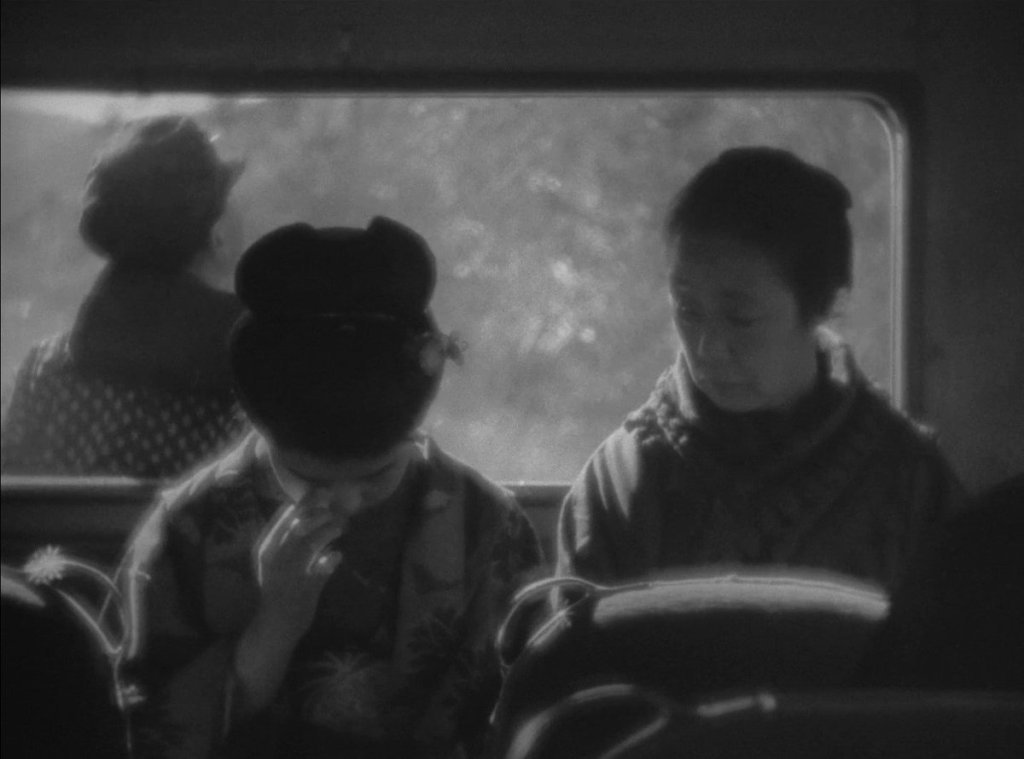 Hiroshi Shimizu repeatedly employs lyrical front and rearview perspectives of the bus as it passes the townsfolk (the driver heartily shouts and waves his gloved hand, “Arigato!”) while navigating through the scenic mountain roads. The narrative largely chronicles a single trip from a village at the mountain to the train station (covering 80 km) and the lively groups of passengers boarding the bus represent the cross-section of rural Japanese society, all enduring hardships related to the era’s economic depression.

Related to Mr. Thank You: The Only Son [1936] Review – The Characteristic Ozu Style at its Nascent Stage

The primary character apart from the driver is an innocent and melancholic 17-year-old girl (Mayume Tsukiji), who is accompanied by her mother (Kaoru Futaba). The daughter is about to take the train to Tokyo and part ways with her mother. The sorrowful glance of Mr. Thank You directed towards the girl (the driver overhears a conversation between the mother and a woman) says that there’s more to her working as a ‘maid’ in Tokyo.

The presence of a sassy and worldly female co-traveler (Michiko Kuwano), coded as a prostitute, tells us about the world the 17-year-old girl is heading into. Mr. Thank You himself has driven many of the young girls down the mountains, who are sold by their families to withstand the famine. The 17-year old’s downcast eyes and tearful looks pains the driver so much that he can’t force himself to remain as the passive observer.Mr. Thank You (‘Arigato-san’, 1936) was based on a poignant short story by acclaimed Japanese author Yasunari Kawabata (his short-story was also the basis of 1926 avant-garde silent masterpiece ‘A Page of Madness’).

The innocent maiden also earns the attention of other passengers, especially a pompous salesman with a fake handlebar mustache. The narrative is enlivened by the interplay between the passengers, especially between the sassy young man and uppity salesman. The trip is also punctuated with Arigato-san stopping the bus to relay messages from one local person to another, and taking up the village girls’ order for new gramophone records. One girl, a migrant laborer, requests the driver to visit her father’s grave with flowers. Before saying farewell, she laments how they (the workers) never get to enjoy the fruits of their labor, and it’s followed by the brilliant shot of crew of migrant workers walking through the snaking mountain road. And it is to Hiroshi Shimizu’s credit that he elegantly blends the individual stories of characters with the larger political and social themes of the era.Mr. Thank You (‘Arigato-san’, 1936) was based on a poignant short story by acclaimed Japanese author Yasunari Kawabata (his short-story was also the basis of 1926 avant-garde silent masterpiece ‘A Page of Madness’).

Mr. Thank You was mostly made in an improvisational manner without much of a script. Yet, Shimizu’s constantly moving camera that effectively focuses on the interior of the bus while also charmingly takes in the scenery, providing us with a lived-in feel (as if we are one of the passengers). The constant remainders of the village folks’ hardships is often juxtaposed with the image of the bus approaching pedestrians which dissolves to a shot of the bus drawing away from them, as the driver happily bestows a ‘thank you’. This recurring visual trope gives us the feeling that the pedestrians are as much our fellow travelers as the ones inside the bus.

Since in the narrative course, we increasingly learn about different dimensions of the economic depression, we can discern that the hiking may not be done out of choice, but due to financial downfall. Like the marginalized individuals taking the bus, the poor pedestrians also represent the population at the periphery. Moreover, such a tender and poetic formal approach smartly avoids heavyhanded social commentary. Director Shimizu’s critique of the march to modernity is fairly balanced. On one hand, he touches upon the extreme difficulties of rapid industrialization and exploitation of the migrant workforce, whereas on the other hand, the film-maker views the road and transit as a symbol for human connection and progress. Eventually, the driver’s sweet demeanor and the ‘Arigatos’ he offers remains as a beacon of hope and positivity in a world burdened by penury and desolation.

Overall, Mr. Thank You (76 minutes) is an endearing portrait of struggling common folks that’s as stylistically fresh and thematically universal as it ever was.