There’s a wonderful ambiguity in the quiet, self-contained on-screen persona of Setsuko Hara, best known for her phenomenal performance in Ozu’s Noriko Trilogy – Late Spring (1949), Early Summer (1951), and Tokyo Story (1953). Hara’s signature touch is the way she laughs through her tears. Or as Michael Newton explains in his book ‘Show People’: “Her voice is perpetually breaking into laughter or tear but almost never becomes fully either” [1]. Though Setsuko Hara often played characters that came across as a symbol of familial stability, she can subtly express the sadness, longing, and devastation imposed upon her by the social conventions. A modern feminist reading on Hara’s characters may attract few blistering criticisms. But it’s important to understand the social milieu of post-war Japan where women were forced into servitude, their hopes modest and misery a constant.

The characters Setsuko Hara often played are a paradox: they are old-fashioned as well as modern: restrained and tempestuous; headstrong and reconciliatory. Whatever roles she played – daughter, wife, mother – she somehow retained the characters’ individual self. Apart from the roles Hara played in Ozu’s films, the paradoxical core was also evoked in Hara’s collaboration with Mikio Naruse whose films passively and poetically observed women left with little options. Repast (Meshi, 1951) in particular is an important film among Hara-Naruse collaboration, in which the director’s brilliant look at women’s daily lives in post-war Japan is elevated by Hara’s mesmerizingly nuanced wordless gaze. 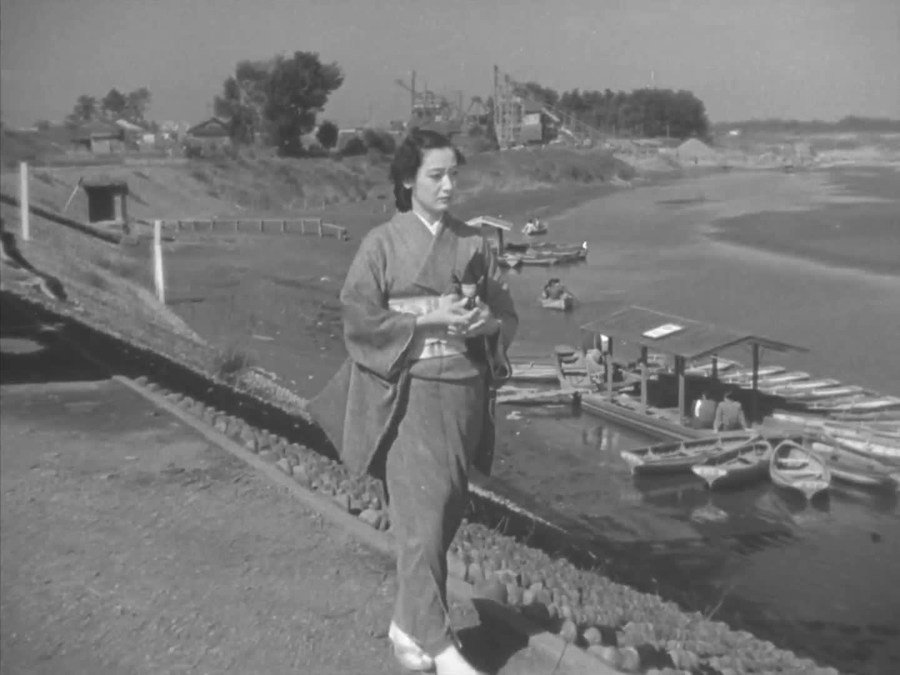 Repast is an adaptation of author Fumiko Hayashi’s unfinished story. Naruse later made five films based on Hayashi’s works. The script was written by Toshiro Ide and Sumie Tanaka and supervised by the popular Japanese novelist Yasunari Kawabata. Repast, a word for meal, revolves around Michiyo Okamoto (Setsuko Hara), trapped in her dead-end domestic life and stuck in a decrepit neighborhood in the outskirts of Osaka with her low-level salaryman husband Hatsunosuke ‘Hatsu’ Okamoto (Ken Uehara). Her neighbor is a mistress and bartender. Thieving is rampant in the neighborhood and food prices are growing day-by-day. Apart from the absence of children, what’s more easily discernible in the lack of intimacy as the husband Hatsu only croons, ‘I’m hungry!’

Hatsu, however, doesn’t come across as the gruff patriarch. He is caught in the monotony of a steady job at a brokerage without harboring any ambitions, probably fearing of losing what little he has. In an early voice-over, Michiyo admits that she married out of love and moved to Osaka from Tokyo, and now she sees it as a sort of exile. Though Michiyo is the protagonist, Naruse spends time to showcase Hatsu’s routine work life. It makes us understand that Hatsu isn’t being deliberately indifferent, but he is just taking things for granted, never really paying attention to the tiresome drudgery that’s consuming their married life.

Related to Repast: The Eternal Breasts [1955] – A Portrayal of Female Desires and Creativity that’s Daring for its Time

For Michiyo, the final straw is drawn after the arrival of 20-year-old Satoko (Yukiko Shimazaki), Hatsu’s chirpy niece who has run away from her Tokyo home, avoiding arranged marriage and seeking some office job in Osaka. Hailing from a well-heeled middle-class family, Satoko is more self-centered and unlike Michiyo and Hatsu has never had the first-hand experience of post-war poverty. While Michiyo borrows money to buy rice, the fun-loving Satoko goes on a sight-seeing trip with her uncle. Naruse cuts between the picturesque sights of the trip and Michiyo cooking and cleaning in her stifling household.  Satoko just lazes around, wanders around the city, chats with the allegedly disreputable ‘mistress’ neighbor, and flirtatiously chats with her uncle.

Though Satoko seems to have a crush on her uncle, Michiyo isn’t really jealous. She is just exasperated that her life is confined to only preparing the next meal. Michiyo meets her old school friends, runs into her handsome unmarried cousin who greatly cares about her. It all makes Michiyo wonder about her options in life. When Satoko leaves for Tokyo, Michiyo accompanies her to visit her own mother (Haruko Sugimura). In Tokyo, Michiyo’s mother still lives in the makeshift house built after the bombing raids with her younger sister Mitsuko (Yoko Sugi) and her husband (Keiju Kobayashi). She learns that there’s not much freedom in the post-war social scenario to lead an independent life. Moreover, her mother keeps insisting on finding ‘happiness’ in serving her husband. Though Naruse seems to reach for a happy ending with Michiyo accepting her place in the family and society, strengthened by a touchingly aestheticized reunion, Setsuko Hara and Naruse also maintains an ambiguity that offers lot more than a simplistic reading.

The Senses of Cinema article on Repast suggests how the partial, subjective perspective of Michiyo, bookended with literary voice-overs, provides enough room for interpretations: “Michiyo’s visible unhappiness is a continual reproach to Hatsunosuke who internalizes his sense of inadequacy in a silence Michiyo misreads as indifference…Hatsu’s humiliations at work, his exhaustion, and his sense of helplessness is shown with more sympathy than Michiyo can extend.  As Michiyo discovers when she stays with her family, it is easy to exploit others who are prepared to look after you…” [2]. Similarly, Naruse’s staging of the final scenes thrives with ambivalence which is sort of relieved by the final voice-over and a tranquil tracking shot of the couple’s Osaka neighborhood.

When Michiyo receives news of her husband’s arrival to Tokyo she isn’t in the mood for reconciliation. She runs out of her house, only to run into him in the street as a joyous procession of people carrying a portable shrine walk around the street. They are trapped among the crowd of joyous festivity and then we see them in a small restaurant ordering beer. Hatsu bashfully says that he has received a better job offer and he would accept it after talking with her. Only in this scene, the husband and wife’s eyes meet. After gulping the beer, Hatsu cries out as usual, ‘I’m hungry!’ But he immediately remembers Michiyo words of reproach during their last argument, and drops in a sorry. Setsuko Hara’s Michiyo laughs through her tears, probably satisfied that at least he now pays attention to her, before deciding to reconcile with him.

In the very final scene, however, Hatsu seems to have reverted to his old form, sleeping in the train too tired to hold a conversation with Michiyo. Hara’s expression – after tearing the letter she has written to him – is somewhere between being content and sad. Did she capitulate since this happens to be her only option in life? But Michiyo’s soliloquy offers that ‘a married woman’s best shot at happiness lies within the married life itself’.  In the same voice-over monologue, she also acknowledges the ‘drudgery of work’ Hatsu endures, and further states that, “Each new day, he continues to struggle to make a life for us.” The Senses of Cinema article which states from Catherine Russell’s book [3], conveys that Michiyo has eventually understood her husband’s pain and problems too in the vicious post-war society. Although equating women’s happiness with married life would make the modern viewers to scoff at the ending, I felt that if you take away this one line in the voice-over and look beyond Michiyo’s façade of compliance, there’s rich ambiguity in the narrative that demands patient reading of Naruse’s presentation.

Though Mikio Naruse lacks an instantly identifiable directorial trademark like his contemporaries Akira Kurosawa, Kenji Mizoguchi or Yasujiro Ozu, he is a wonderful craftsman whose quiet, more conventional style camouflages deeper emotional undercurrents and profound thematic notions. Categorizing Naruse’s cinema as ‘melodrama’ wouldn’t express the eloquence of his realist aesthetic or his seamless observation of ‘ordinary’ Japanese. Similar to the works of Ozu and Mizoguchi, Naruse’s film language withholds traits of proto-feminism, and like them he neither evokes disdain nor pity on his characters. In fact, Naruse’s narratives contains darker emotional core and he can effectively use the rhetoric of melodrama to create complex characters. Repast was a comeback movie of sorts for Naruse, who even though was making films from the silent-era didn’t deliver a successful movie after the war. The profound influence of writer Fumiko Hayashi on Naruse, which started with Repast, pushed him to rediscover himself in the 1950s.

Mikio Naruse might make films on simple problems of ordinary people. But the lighting, framing, and most importantly his extraordinary ability to build tension through concise images is a wonder to behold. Attuning to female subjectivity, in Repast, Naruse masterfully manufactures and releases tension. For instance, when the director captures Michiyo’s break from domesticity as she calmly walks around the city, window shopping with her single-friend, you could feel a lyrical lightness in the proceedings. This he then replaces with high tension when Michiyo returns home to learn that Satoko was only lounging around without preparing supper while Hatsu has carelessly lost his shoes to the neighborhood thief. Naruse brilliantly conveys the tension building inside Michiyo through a simple shot of cigarette butt discarded in ashtray in the center of Satoko’s room, which is perfectly antithetical to the shot of Michiyo yearningly looking at a tie in the shop’s window to buy for Hatsu. Such subtle hold and release of tension could be felt in many key scenes of the narrative, especially during the aforementioned Michiyo’s reconciliation scene with Hatsu.

Overall, Repast (97 minutes) is a significant work in Mikio Naruse’s oeuvre that sheds light on the post-war Japanese society and discloses the general truth about fate of women belonging to the era, for whom monotony and misery was the mainstay of life.

5 Underrated Gambling Movies You Should Watch