Home»Reviews»Films This Week»Happiest Season [2020] HULU Review: A Heartwarming Lesbian Holiday rom-com we all have been waiting for
Films This Week/Reviews

Christmas is approaching. That means it is time to gather yourself in a warm fuzzy blanket and watch a holiday rom-com from the likes of It’s a Wonderful Life, Love Actually, About Time, When Harry met Sally…, The Holiday to Bridget Jones Diary. There is so much to choose from. But almost every single one of them focuses on a straight couple and there are even channels (Hallmark) dedicated to manufacturing these stories. LGBTQ+ stories don’t even get a grain of time in these films. And for most who were rejected by their families, or struggling to come out this becomes the most difficult times of the year. Luckily, this season Clea Duvall with Happiest Season brings the first major lesbian holiday rom-com; which not only explores the coming-out trope but also highlights a relationship between two women surrounded by everything Christmas-y.

Happiest Season opens with Harper (Mackenzie Davis) and Abby (Kristen Stewart) – a lesbian couple madly in love taking a stroll down their neighborhood and enjoying the festivities, lights, and decoration. Harper, being the enthusiastic one about Christmas and everything that comes along with it wants her lovely girlfriend Abby to feel the same. So, she invites Abby to come along and visit her family for Christmas. Abby, excited to meet her girlfriend’s parents for the first time takes her gay best friend John (Dan Levy) to buy an engagement ring and reveals her plans to propose to Harper on Christmas Day after asking for Harper’s father’s blessing. To which John jokes by saying, “Way to stick it to the patriarchy.” But for Abby, Harper is her person with whom she wants to build a life and wants everyone to know that. However, her big plan gets disrupted when Harper reveals to her that she hasn’t come out to her conservative parents and family yet. More so, she asks Abby to pretend to be her straight, orphaned roommate. Which Abby goes along with, with time it only becomes harder for her to pretend.

Harper’s parents Ted (Victor Garber) and Tipper (Mary Steenburgen) are two people who have been more concerned with what other people think about their appearance and reputation that they have forgotten the pressure they have inflicted upon their children to live up to their standards. The fact that they have to  compete with each other for their love says a lot about them. This is only an added fear among them – especially in Harper, who knows that if she tells her parents that she is a lesbian, they will stop loving her. With Ted running for mayoral candidacy and Harper being his point person to parade around his donors, she strips herself of her happiness and stakes losing Abby in the process. 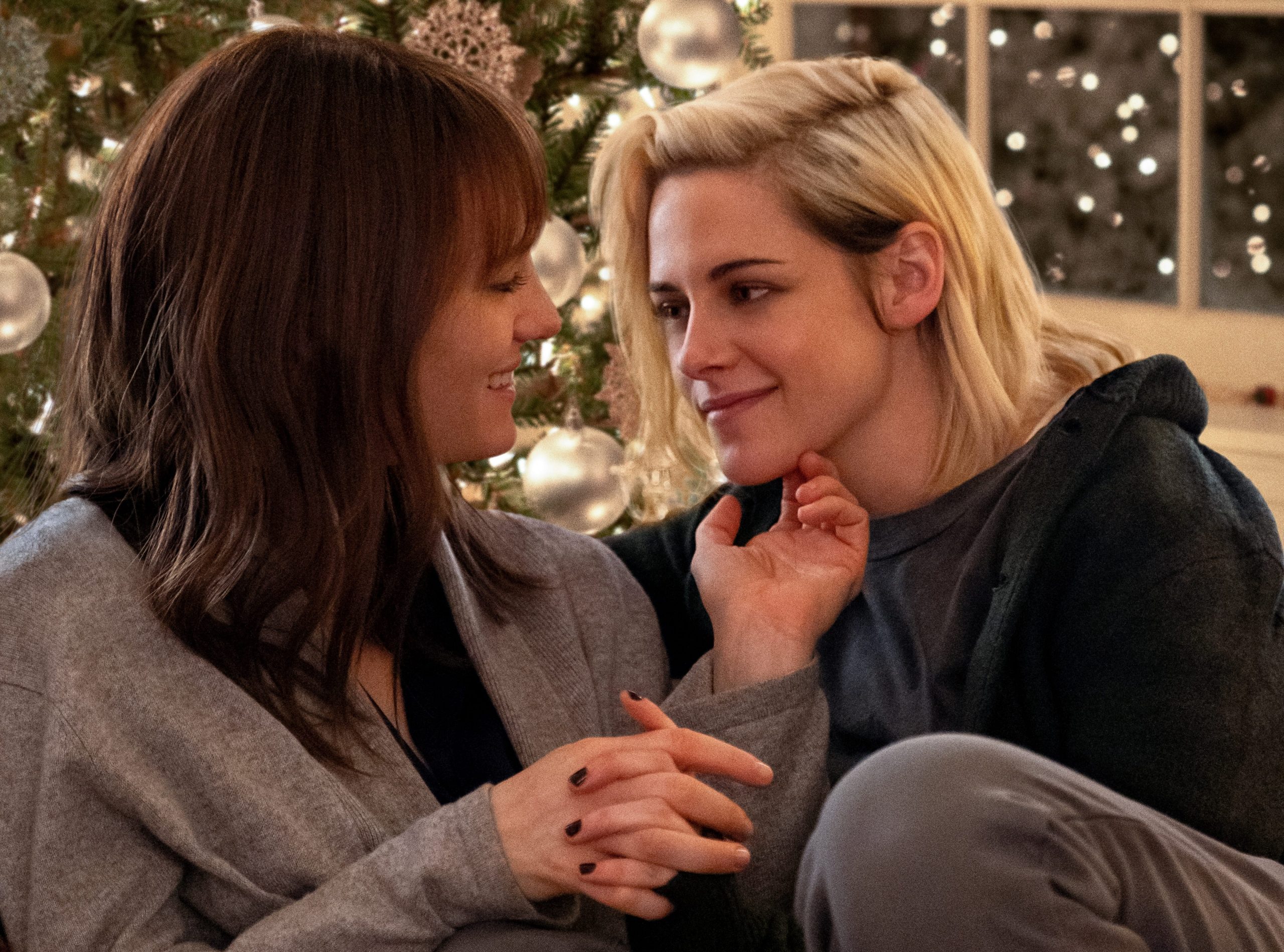 One thing Duvall does exceptionally well with Happiest Season is letting it’s charm and humor flow naturally. Especially with Abby, who is trying her best to get her foot in with the family, while pretending to be something she is not. She finds a friend in Riley (Aubrey Plaza), Harper’s first girlfriend from high school who shares familiarity with Abby’s situation and helps her navigate it. As the story goes on, Abby starts to notice how the Harper she knows is different from Harper she witnesses here. Which only adds to her frustrations, patience, and doubts about their relationship. She starts doubting that Harper would never come out to her parents. Abby in distress calls John, who later delivers a perfect monologue that leaves you crying your heart out.

Happiest Season features one of the greatest and hilarious cast ensembles. Starting with Stewart as Abby who gives one of her warmest and emotionally moving performances ever. She just feels so at ease with her character and herself. Abby was made just for her. Davis who plays Stewart’s character other half nails her character’s inner conflict to the bone. You can see the fear her character feels of losing both her parent’s love and Abby. Davis and Stewart share beautiful chemistry and the way Davis holds Stewart’s face in her hands is just so heartwarming to watch.

Supporting Stewart’s Abby is Levy, who plays her best friend (also her pretend ex-boyfriend in a comical situation), John. His presence itself brings a smile to your face and his monologue on the journey of coming out is so honest and perfectly delivered. Alison Brie plays Harper’s uptight elder sister Sloane who was once the golden child of the family until she left her reputed job as a lawyer to make hand-curated gift experiences with her husband Eric played by Burl Moseley. Mary Holland who is also the co-writer plays the black sheep of the family and middle sister Jane. She is the only one who can be her unique and lovely self only because her parents gave up on her early on. Garber plays Harper’s mayoral candidate father, Ted, and the extraordinary Steenburgen plays Harper’s mother, Tipper. And saving the best for the last is Plaza, who as Riley, Harper’s ex, steals almost every frame she is in.

Happiest Season is everything that one can hope for from a romantic comedy. Duvall and Holland balance the script perfectly while taking into account every character appearing on the screen and giving them their moment to shine. They also keep the family dynamics in check – especially in building the tension between sisters that explodes in the final act.

It is a holiday movie through and through. It will make you laugh, reach for the tissues every once in a while –  especially when John lets it out saying why it is hard for the LGBTQ+ community to say those words perfectly incapsulating the moments before coming out and what happens after those words are said. Being a holiday movie, Happiest Season makes them know that it gets better and they will be fine. A message that hopefully reaches every family across the globe in having that conversation of acceptance and understanding this Christmas.

So, grab that hot cup of cocoa with candy and let Happiest Season cheer you up, and fill you with love and acceptance this holiday season.