Home»Reviews»Film Festivals»Once Upon a Time in Calcutta [2021]: ‘Venice’ Review – A Nuanced and Intimate Portrait of Urban Decay and Metamorphosis
Film Festivals/Reviews/Venice Film Festival

Bengali writer/director Aditya Vikram Sengupta opts for a much bigger and vivid canvas for his third feature film, Once Upon a Time in Calcutta (2021). Modern life is changing so quickly that we can hardly process it. In fact, it doesn’t take much time for us to address our recent past as ‘once upon a time’. The tides of modernity are not only transforming the landscape but our self & mindsets are also swept along. Whatever and whoever is deemed irrelevant is left behind or cut down. A wide range of complex and contradictory emotions are at play here. And it is what Aditya strives to capture – a portrait of a city in flux through a handful of individuals’ memories, identity, desires, and loss.

The principal character in Once Upon a Time in Calcutta is Ela Chakraborty (exceptionally played by Sreelekha Mitra), a former TV actress grieving over the recent loss of her little daughter. Ela is estranged from her husband, Shishir. They rarely acknowledge each other’s presence, except for when Shishir buys her whisky, and when Ela complaints to him about the refrigerator. The visual emphasis on the doors within the household exacerbates their estrangement. Shishir finds solace through his compliant German shepherd, Elsa. But Ela, having lost her identity as a mother, wants to quickly move on. She works as a television host for an astrology show and wants to escape the stasis in life by buying a new home.

Since the loan application is rejected, her only hope is to sell the father’s property, a dilapidated theater complex. But her step-brother Bubu (Bratya Basu) stays at the place, clinging to his old memories. The shared past between Bubu and Ela is dark and devastatingly complex. There are lot of interesting layers to the character of Ela. One is that she is suspended between the fading memories of her dead mother and daughter. But the ties she has with her living step-brother or the husband is devoid of meaning. Moreover, Ela believes in escaping the claws of fate. It all comes together to define her subsequent actions. 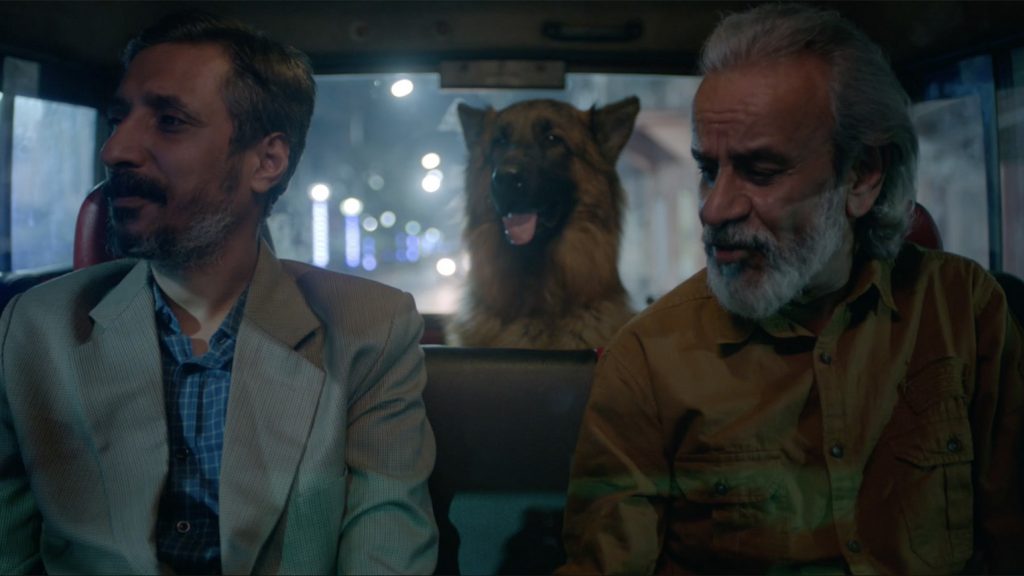 Related to Once Upon a Time in Calcutta: Taipei Story (1985): A City in Purgatory

She finds hope for renewal through a chance encounter with an old flame named Bhaskhar (Arindam Ghosh). Ela’s lecherous boss, who also runs a chit Fund Company, desires her. There are few satellite characters that revolve around Ela. One is Raja (Shayak Roy), who fulfills the role of a younger brother, and Ela has found him a stable job at her boss’ chit fund company. Raja’s girlfriend, Pinky is Ela’s beautician. The connection between Ela and Raja is complicated by the fact that Raja’s elderly father has long been the caretaker of Bubu and the theater.

Once Upon a Time in Calcutta might sound like that it’s strictly plot-driven compared to Aditya’s first two movies, Labor of Love (2014) and Jonaki (2018). While that is true to an extent, the filmmaker provides ample breathing space for his characters and his themes to take root. Once we know who the primary characters are and how they are interrelated with each other, we can somehow predict the arc the filmmaker is trying to reach. Nevertheless, there’s a lot of brilliant visual motifs and individual set-pieces which resonate beyond the confines of its plot.

More than calling it plot-driven, I’d like to consider Once Upon a Time in Calcutta as a well-rounded thesis film. As Aditya has mentioned in his interviews, the dismantling of the dinosaur statues to make way for the flyover is the origination point of his narrative. It shows how an iconic identity of a place can instantly become irrelevant in the face of change. Similarly, the filmmaker zeroes in on the constant flux in society that shapes each individuals’ personal metamorphosis. However, Aditya’s thesis-driven approach is more fluid and doesn’t play up with the notions of ‘this versus that’. He isn’t in the grip of nostalgia or carrying the burden of ideology. Stagnant lives, rapidly transformed lives, and people eking out a living in the periphery of society – the filmmaker observes all forms of life that’s impacted by the ruthless march towards the so-called modernization.

Cinematographer Gokhan Tiryaki finds lyricism even amidst the atmosphere of desolation and sadness. Furthermore, the sense of visual foreboding and dark humor discards some of the emotional weight of the narrative. The spellbinding shot of Bhaskar inside the elevator subtly indicates the caged existence of his life as well as remains a harbinger of things to come. Pradipto Paul, the chit-fund owner who is exasperated by his wig later bears the true weight of his sin. The modernized version of Tagore’s song itself becomes a fascinating leitmotif.

Modernizing cities can be suffocating in the way it perpetuates homogeneity. While flyovers and high-rise buildings are uniformly invading the landscape, Tagore and his distorted poetry (or the modern makeover) are omnipresent in the city’s socio-cultural space. In one powerful scene, Tagore busts are found amidst blood and destruction. At another moment of deadpan humor, a little kid, dressed as Tagore, wears a stoic expression. In Labor of Love (Asha Jaoar Majhe), Aditya Vikram Sengupta employed restrained lyricism to explore love and tenderness that flows within a mundane space in the midst of an economic crisis. In fact, Mr. Aditya not only directed his gaze on one’s innermost feelings but also stayed sensitive to the emotional evanescence. Eventually, the filmmaker seems to say that however fleeting it is, the whole gamut of emotions which we simply classify as ‘love’, is definitely worth it, particularly in order to cope with the leaden materiality of life. In those brief moments of togetherness, the couple extracts comforting feelings that see them through their onerous circular routine.

In Once Upon A Time In Calcutta (2021), love is a much more complex affair. Here it’s an emotion that’s intricately tied with a lot of others. The foggy, misty ambiance in Labor of Love is replaced here with the haze of mosquito fogging. And the precise point at which the mosquito fogger enters the frame and the clever juxtaposition that follows adds a lot to Aditya’s visual storytelling method. There’s no symbiosis between Ela and Shishir, but utter discord. Or in the case of Pinky, she’s not just defined by her love for Raja, but also shaped by her identity and commitments. Even in Bubu’s case, love is a thing of the past, deeply entrenched in his memories which are also rife with resentment and yearning.

‘Once Upon a Time in Calcutta’ is book-ended with deaths. But while it opens with the burning flames of a pyre, it ends with a magical ascension. More than a low-key hope, it indicates Ela’s resolve to live come what may. This final image along with the sounds of newborn puppies speaks of lives flourishing amidst thwarted aspirations, grief, and discontent.  Overall, Once Upon a Time in Calcutta (131 minutes) succeeds in creating a fully realized and idiosyncratic portrait of a metropolis by plumbing the depths of different human emotions and experiences. It’s a carefully layered drama that gradually grows on you.

Once Upon a Time in Calcutta (2021) Links: IMDb, Letterboxd

Dusk Stone [2021]: 'Venice' Review - Like a Bedtime Story, Magical and Comforting at the Same Time