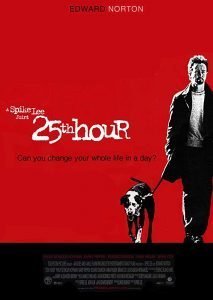 Spike Lee has made many great films about and in New York, making him one of the best New York directors out there. When he made 25th Hour in the open wound of the city throughout 2001 and 2002, it added a gravitas to the production, elevating this tale of the last day of a criminal before he faces lengthy jail time.

Monty (Edward Norton) somewhat typifies the nice-enough gangster character that seems to have it all – plenty of cash, nice apartment, Rosario Dawson for a girlfriend, a dog – but a warrant search discovers his stash of illegitimate cash and bricks of heroin. Shhheeeeeiiiit. All there is for him now is just a little time before his prison sentence, twenty-four hours to party it up a bit with his loyal and loving girlfriend Naturelle, his stock market hot-shot buddy Frank (Barry Pepper), his dweebish teacher buddy Jacob (Philip Seymour Hoffmann), and Jacob’s flirtatious 17 year old student Mary (Anna Paquin) who by chance makes it to the going-away party.

There’s not a single scene here that doesn’t amaze or astound, though there’s two montages that really steal the show. First, there’s Monty’s misanthropic, utterly hateful soliloquy, an attention-grabbing outburst from him that voices the worst of New York, but conversely shows the best of New York, which will certainly go down as one of the best rants in cinema history. Secondly, the ending fantasy scene showing what could be a different life for Monty, one of compromise and initial isolation, but what then becomes a loving and fruitful life – along with the final line, spoken by Monty’s bar-owning former alcoholic father (Brian Cox), “This life came so close to never happening”, really ends the film on a walloping gut-punch.

What may be the third most memorable moment (and Lee’s favourite scene in the film) is a single take that observes Frank and Jacob talking in Frank’s apartment about Monty’s looming fate and what to be done in his absence, all the while standing by a window overlooking ground zero of the World Trade Centre attack. No effects used here, if you look closely enough, you can even see workers and machines, cleaning the rubble and searching for human remains, and they aren’t hired extras.

25th Hour was the first fictional film to openly address 9/11, and did so in a way that seemed deeply confrontational, yet sparingly so, as it only makes up the background of the film – it adds to the sense of pathos and regret that surrounds Monty’s predicament.

Another scene that really captured me was a quiet moment, set on the morning after, where he, Frank, and Jacob take the dog for a walk by the water. They see a tug-boat casually roll past and Monty muses “wouldn’t that be the life, huh? Working the tug-boat, out on the river every morning”, and Jacob simply responds “yeah, that’d be nice.” It’s a small moment with a big impact because of how it relates to this human curiosity to observe other people and wonder, even fantasise, about being in their shoes.

There are not too many complaints from me, though here they are. There’s one too many jarring double cuts, some of the continuity is noticeably off, and Jacob and Mary’s B-story involving off-hands seduction feels a little tenuously connected to the main story (given that it’s also dealing with guilt), though it’s at least riveting to watch, mostly due to Paquin’s entirely confident performance.

I first saw this film way back in 2009 on my DVR and thought it was pretty good, though since I watched it in increments, I felt I ought to give it a proper shot. It took nearly a decade, but I’m glad to have now properly given a chance to what may be Spike Lee’s very best joint. The fact that the late comedian Patrice O’Neal cameos in this as a club bouncer may be partly the reason.