Parallel Mothers Movie Ending Explained & Themes Analyzed: Parallel Mothers is easily one of the most ambitious films which Pedro Almodovar has made yet. He chooses a tricky terrain to work upon- addressing the internal politics of his native Spain. And while the approach needed a lot more sharpness, depth, and anger, it more than makes up in terms of nuance, sentiment, and heft. The way the basic storyline is written makes it one of the most powerful films to emerge from last year.

The film further benefits from its extraordinary leading performances. Penelope Cruz is as good as she’s always been in a PA film. Her ferocity and compelling energy are enough to carry the heaviness and melodrama of the film. Milena Smit, however, performs with just as much conviction and grounded authenticity.

Parallel Mothers is an easy film to watch. Its political function is cleverly slipped under the fact that it is an effortless, delightful entertainer as well. However, it’s a film that is just as complex and layered. Here is our attempt to explain the film to you.

The film starts by introducing us to Janis. She’s a Madrid-based photographer who lives on her own. She discusses with her partner, an archaeologist named Arturo, the possibility of digging the mass grave which was constructed during the Spanish Civil War. Thousands of men from her village were killed and buried there, which included her late great-grandfather. Arturo agrees to take her case. Later, he impregnates Janis. She decides to keep the baby and raise it as a single mother.

Months later, we see Janis sharing a hospital with Ana, a teenage girl who is accompanied by her mother. Both of them conceive their babies at the same time, giving birth to healthy daughters at the same time. Their girls, named Cecilia and Anita respectively, undergo an operation and are released at the same time. Both exchange numbers and then go separate ways. Later, Arturo, who has broken up with Janis, is invited by the latter to see Cecilia. Arturo reacts strangely to the baby, claiming that it doesn’t even moderately resemble him.

To confirm this, she takes a maternity test. Its downloaded result confirms the fact that she isn’t Cecilia’s real mother, which she decides to keep a secret. After a few months, she runs into Ana, who is working at a café. A lot has changed in her life. Her mother is never around, largely to pursue her acting career. At Janis’s apartment, Ana reveals that Anita has been dead for quite some time, cot death being the reason. When Janis sees Anita’s photo, her suspicions are confirmed- the babies were in fact swapped during evaluation. 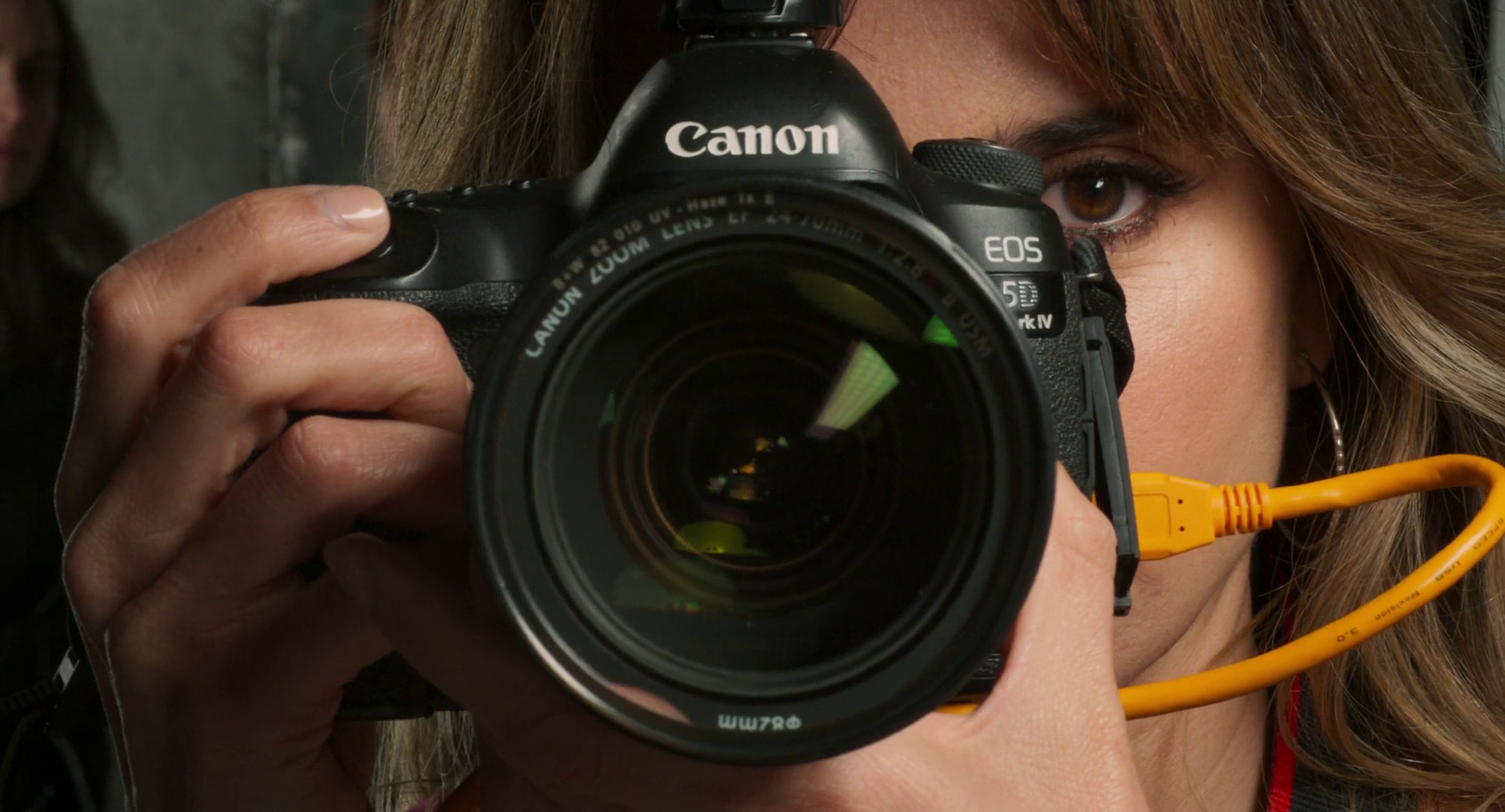 Janis is later seen offering Ana a job as the live-in maid. She would pay her for taking care of both Cecilia and the house. Eventually, she takes the saliva of Ana for secretly performing her maternity test. The result immediately shows that she is, in fact, the biological mother of Cecilia. Ana later reveals that her pregnancy was a result of the forced sexual advances made by her classmates. She never did anything about it because her father wanted to avoid negative press attention. With the course of events, a casual physical romance strikes between Janis and Ana, strengthening their relationship. This, however, is a little disoriented because Janis isn’t sure of it.

With the course of events, Janis eventually reveals to Ana the truth about the biological roots of Cecilia and the (now dead) Anita. Angrily, Ana takes Cecilia and leaves for the night to her mother’s. Janis then admits this to Arturo on call, who comes by to comfort her. The next morning, Ana calls Janis and in a calm, composed manner, asks Janis to be a part of her life and assures her that she can still see Cecilia.

After a few months, Janis and Arturo travel to her home village. There, he surveys the detail of the mass grave and makes love with Cecilia on her childhood bed. Later, Ana arrives with Cecilia to the spot. It’s then that Janis reveals to Ana that she is three months pregnant. She also says that she’ll name her daughter after Ana and would name the child Antonio (after her great-grandfather) if it’s a boy. Eventually, the excavation is a success and the villagers wave their exhumed relatives a tearful goodbye.

Now, let’s come to why Parallel Mothers is more political than it lets on. In the end, it imagines a starkly dystopian future where the bodies of these people are piled up. This is a horror that might occur if fascism makes a return. We see Janis repeatedly mentioning the grave and its need to be exhumed. She even lectures Ana on national identity and why the exhumation is important for everyone. Even her relationship with Arturo is less romantic and more practically based upon this very need.

With the character of Janis, Almodovar weaponizes his politics in an understated manner. Everyone aware of Spanish politics in recent times would get the crux of this. In Spain’s constitutional monarchy, the far-right Vox party is slowly but steadily establishing a foothold into the authority. This is problematic because it angles towards the return of darkness in Spanish history. The horrors of the Franco regime seem not so distant if such is the case. Pedro himself has been vocal about it, including the fact that homophobia and sexism have increased rapidly recently. It’s this sentiment that finds its place in the film.

The film also carries a distinctive clarity when it comes to its gender politics. Apart from organically making the film about its mothers, daughters, and matriarchs, the film also has things to say about injustices towards women. Somewhere in the film’s second act, Ana’s mom mentions her divorce which she signed through the Holy Rota. In this, she forcibly had to admit whoredom and adultery, offenses she never committed. Later on, Ana’s triggering gang-rape story is heard, another harsh truth about the world of men which cages women in certain boxes.

THE ASSERTIVE STRENGTH OF THE WOMEN IN:

The one highlight of Parallel Mothers is the assertive confidence of its female leads. The way these characters are written transcends the power of their performances. Janis, for example, is a definite standout. The way she pursues her passion for photographic gigs while making her political stance clear is remarkable. Ana is a relatively slighter character. However, her maturity and quietness have the kind of emotional momentum and pain which is usually reserved for a male character by mainstream filmmakers. 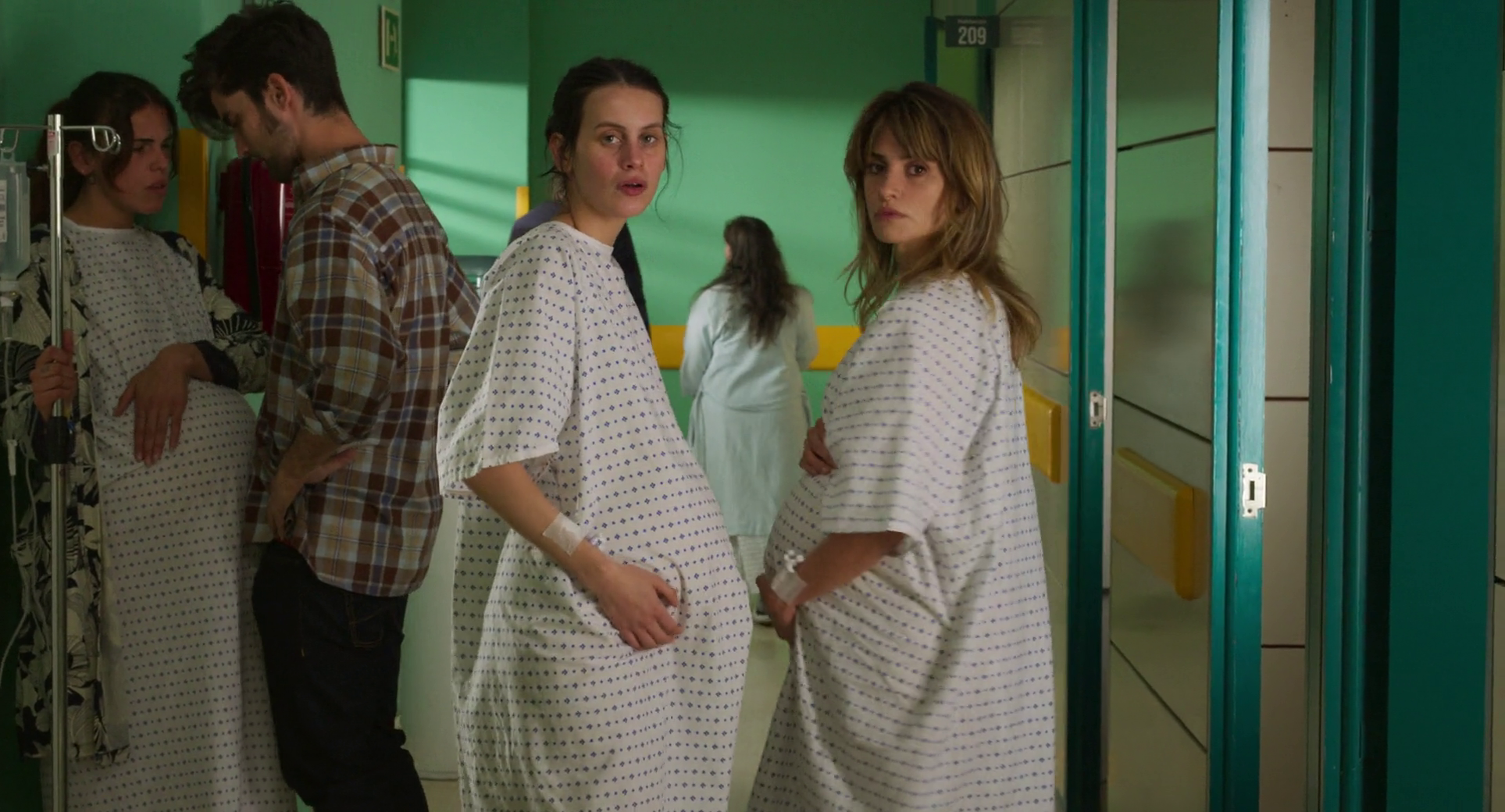 Teresa Ferreras, the mother of Ana, is arguably the strongest of these characters. An aspiring actress, she gives up on her marriage and conventional motherhood to make a late-career breakthrough. An intelligent move was to make Dona Maria her breakout role. Dona in herself is a strong fictional character from the annals of drama history. This adds to the layers of an already complex and sharp character.

The so-called ‘red world’ of Almodovar doesn’t just point towards the brightness and vibrancy of his camerawork and production design. It also points towards the straight-laced melodrama which he weaponizes for such poignant stories which belong to its women. Femininity has more sensuality and allure than all these colors brought together. This in itself makes them free of distraction and full of certain attractiveness.

What does the title ‘PARALLEL MOTHERS’ SIGNIFY?

Parallel Mothers is a complex story about two single mothers. Both Janis and Ana are burdened with this new responsibility. Both of them cope with it in different manners. Janis is a middle-aged woman who is excited about her first flush of motherhood. Even if it’s an accident, she can’t care less. She’s very happy and unapologetic about it. On the other hand, the accident has scarred Ana in many ways. Thus, she’s scared and a little anxious about it. Their destinies get rubbed against each other.

However, the title for it chosen by Almodovar is “Parallel Mothers” (Madres Paralelas). Why are the mothers ‘parallel’? Why aren’t they, say, adjacent to each other? We can never be too sure. However, Janis and Ana are very much parallel in character. Both of them have their own way of dealing with their lives. While Janis is much older, her decision to not tell the truth of her daughter soon enough, or always being a little impulsive, seems a little immature initially. Ana, on the other hand, has lived through a lot more both physically and emotionally, despite being younger. Which of these two lines are longer on paper, seems debatable.

What connects both of them is a transversal that cuts through them. This transversal might be the accidental motherhood and loss of a child, something both of them experienced. It might also be their socio-political realities that bind them in the thread of femininity. However, in the end, it’s their romantic sense of belonging that truly gives them their connective tissue, space, and a sense of closure.

PARALLEL MOTHERS ENDING EXPLAINED: WHAT DO THE SKELETONS MEAN?

Parallel Mothers culminates in a fitting, but at once, strange manner. As the villagers, along with Janis, Ana, little Cecilia, and Arturo gather to mourn their relatives at the exhumed grave; we see an aerial shot filming the skeletons. It is not especially hard to guess who’s the skeletons are. These are the decayed mortal remains of the hundreds of villagers who were buried dead under the conservative fascist regime of Franco during the Spanish Civil War. This shot is of immense importance because often, we see Janis mentioning the grave. Her sentiments are deeply attached to it because it also contains the remains of her great-grandfather. 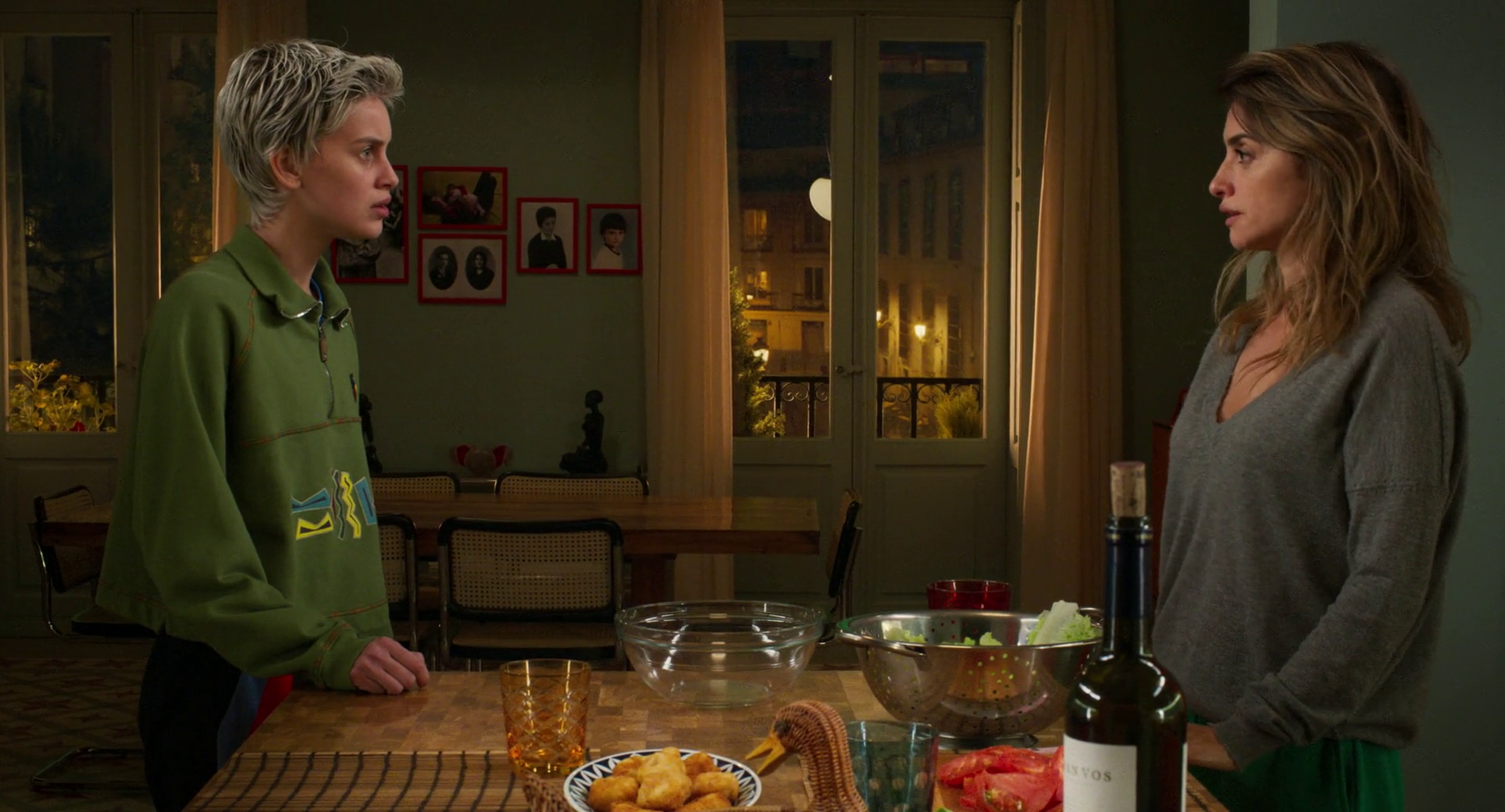 However, something strange happens next. The aerial shot is still intact. But this time, the skeletons are replaced by the bodies of flesh-and-blood people. A close observation indicates that these are in fact the villagers and Arturo, who was actually pretty much alive until that point. It’s a strange shot that seems to carry no relevance. This, actually, is a product of Almodovar’s brilliant visual symbolism. It’s an absorbing cautionary shot pointed towards our future in the fascist hand. It seems to mirror the future of everyone living in peace and doing their jobs with honesty, and how that can change if the power goes into the wrong hands.

At its core, Parallel Mothers is a moving and diligent examination of generational love, tragedy, and empathy. A shared sense of femininity and motherhood informs the plot proceedings in many unexpected ways. The melodrama morphs into captivating moments which linger on and stay with you.

However, its political reading might just emerge as an even more important one. It took nearly forty years for Almodovar to finally address one of the darkest chapters of contemporary Spanish history. And he does it masterfully enough to make it resonate with the current Spanish millennial. It’s a haunting reminder of the tortures and injustices and how the wrong shift of power dynamics might be enough to tingle it back to life.

Geographies of Solitude [2022]: 'Berlinale' Review - A visually stunning documentary on a solo woman living on an island