“Bangarraju” is apparently a sequel to director Kalyan Krishna’s 2016 offering “Soggade Chinni Nayana”. The only purpose for the existence of this absolute commercial ordinariness seems to be fan service. For one has to be an ardent admirer of either or both of the father-son duo of Nagarjuna Akkineni and Naga Chaitanya, to find anything salvageable about this action/comedy/revenge drama. Now, films made for such reason do not necessarily become poor just for the motive for their existence. Last year, Marvel did a massive fan-service offering in the name of “No Way Home”, and it was more than palatable to say the least. “Bangarraju”, however, does not reflect anything creatively new, in any aspect of filmmaking, to be considered a half-decent film on its own.

The film starts with confusion. Bangarraju senior (Nagarjuna Akkineni) is enjoying a gala time in ‘The Good Place’ that is literally heaven; dancing and frolicking with Apsaras (Hindu mythical female spirits known for their beauty and dancing skills), when Satyabhama (Ramya Krishnan), his wife of earthly life joins him. Satyabhama has concerns for Bangarraju (Naga Chaitanya), grandson of Bangarraju and named after him. Grandson Bangarraju, or Bangarraju junior, was brought up by her grandmother after his mother’s death. Bangarraju junior’s father Ram Mohan is blissfully aloof towards his son’s upbringing. Guess who plays Ram Mohan? It’s Nagarjuna Akkineni.

Once you emerge through the confusion of the family tree, you would be introduced to the heavy convolution of plots. As mentioned before, Bangarraju is occasionally a romantic comedy, occasionally a revenge-infused action thriller, occasionally a ludicrous fantasy. This no-commitment towards any specific genre used to be the typical facet of many Indian commercial films. Especially in the 90s. A commercial film used to follow a certain formula. There had to be more than six or seven songs of a different variety, more than a couple of fight sequences, and a handful of out-of-context comedy skits; all embedded together inside 150 minutes of ‘family entertainer’ tag. This is what we often refer to as the ‘masala films’. 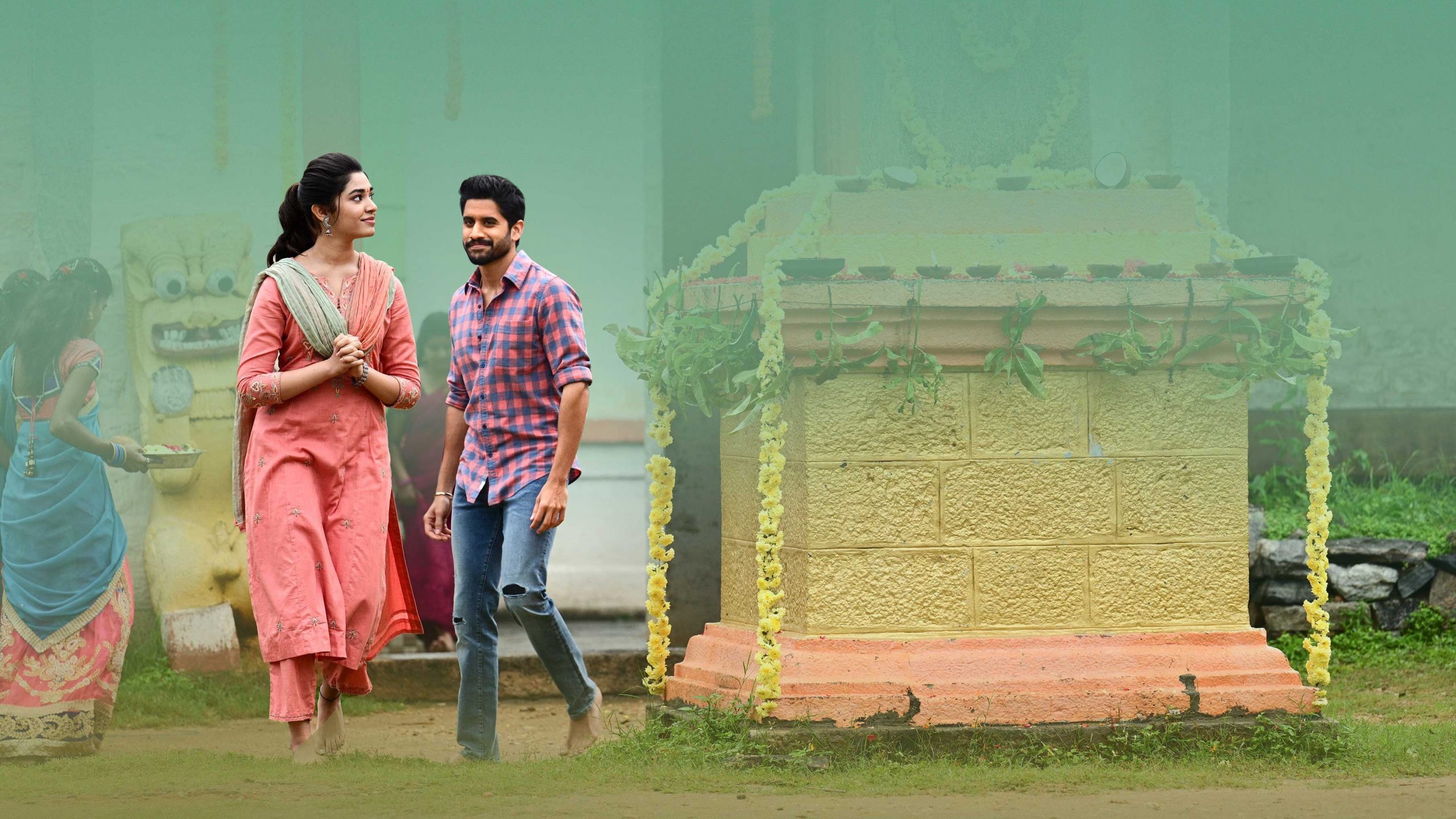 Now, it is not always that films that fall under this masala genre are devoid of any creative spice. Manmohan Desai, a pioneer in masala films, had shown enough artistic sensibilities under the pandering frivolities. However, the problem with following the formula is it begets laziness when it comes to creativity; and more often than not, unlike works of Desai, most of the masala films had a massive dearth of any hint of novelty. Films like “Bangarraju” is a sorry reminder of that.

The central plot of “Bangarraju” revolves around the spirit of senior Bangarraju and Satyabhama coming down to earth to help Bangarraju junior, for a lack of a better phrase, grow up. The twenty-something Bangarraju chases around girls with sexist antics play cards in mango groves when not seducing girls in mango groves, fights with random goons. The spirit of his grandpa helps him become a better man, but only just. Grandma Satyabhama wishes Bangarraju to marry Nagalaxmi (Krithi Shetty), the daughter of the village head, and herself set to become the new village head. Now, this already seemingly filled central plot is further embellished with lazy attempts of humor, some extraordinarily weird twists, and an afterthought of a subplot involving temple treasures, cosmic balance, and an animated king cobra. As if things were not enough, there is a revenge drama infused somewhere between the events, with a multitude of villains.

Also, Read – The Disciple [2020]: ‘TIFF’ Review – A deeply moving character drama about the arduous journey of a failed artist

As intended, the film has frames and frames of the father-son duo, Nagarjuna Akkineni and Naga Chaitanya; involved in swashbuckling activities, whether that is dancing in well-choreographed numbers or fighting goons in slow motion. Their acting scope is limited here, and their presence could be seen as somewhat charismatic enough for the fans, the movie intended to cater to. The women in this kind of film do not get enough chances to show their acting skills, so in even more limited scope Krithi Shetty and Ramya Krishnan could be termed decent.

For a masala film, “Bangarraju” songs are not immediately catchy, and the special effects to show heaven was appalling. Goes well with the overall mediocrity of the film though. It is high time we stop excusing these formulaic offerings in the name of escapism.

Bangarraju is now streaming on Zee5

Badhaai Do [2022] - Ending and Themes Explained