Badhaai Do [2022] – Ending and Themes Explained

Badhaai Do [2022] – Ending and Themes Explained: The idea of incorporating social issues into narratives by blending them with conventional tropes is not new in Bollywood. It was Bimal Roy (Do Bigha Zamin, Parineeta) who was noted as being instrumental in bridging the gap between new cinema and that of post-independence India. But the most significant thing he did for the Indian cinema, for the generations to witness, was by still keeping it Indian. Progressive and reformist themes have always been a key part of Bollywood, as one after another great writer and director that came along, truly carried the potential of understanding the feudal set-up of their respective times while empathizing with the pulse of the people all around. It was Hrishikesh Mukherjee, however, who blended those realistic and socialistic themes and painted them all over the mainstream comedy template, instantly making it palatable to a far larger audience.

Cut to the 21st century, things changed. Drastically, the audience not only became capable of accessing the culturally embedded films that came before but a wider range of cinema from across the globe acting as a channel of peeping into various cultures. Today, making your films inclusive became not a personal choice that seemed preachy, but one that came along naturally to the artists. However, when it comes to a larger scale, it was “Shubh Mangal Zyada Saavdhan” that initially subverted the Bollywood norms of showcasing heterosexual couples by adroitly recreating the famous DDLJ train sequence, but this time flipping the gender norms upside down.

Soon, more people in the industry took notice of this. In the wide array of ‘small-town hero carrying social message’ films that have since flooded the gates in recent years, some worked while others ended up overstepping with its preachiness. Harshavardhan Kulkarni’s “Badhaai Do” isn’t just a story focusing on ‘samlaingikta’ or what one may call a lavender marriage, but one about two homosexual protagonists convincing themselves into keeping their secrets for the good of both. The film works, because the writers don’t treat them as ‘homosexuals being portrayed in a somewhat conservative society. They are fully developed characters, surrounded by people who need a little love and understanding to understand the basic norms of inclusivity. 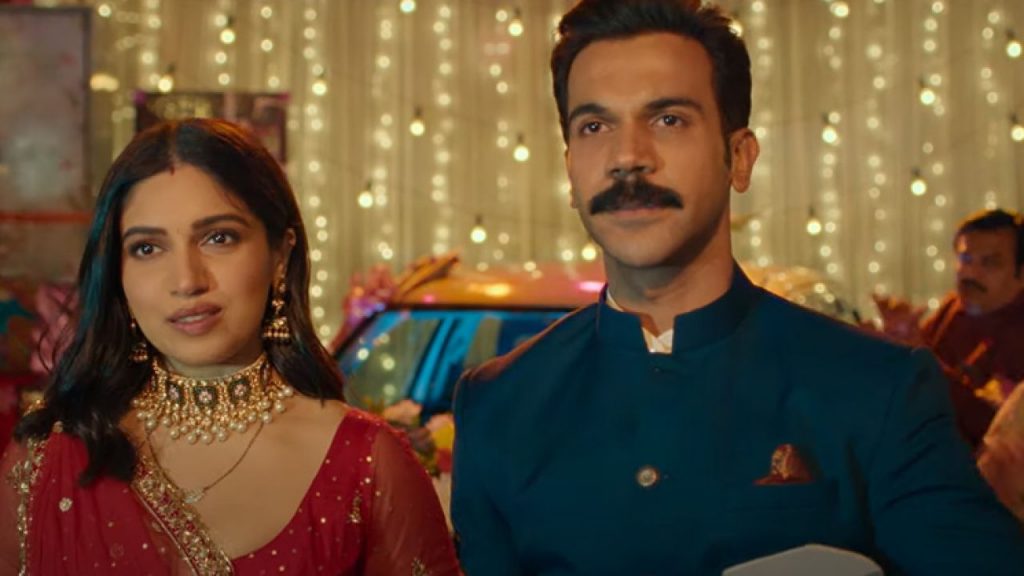 Shardul (Rajkummar Rao) and Sumi Singh (Bhumi Pednekar) play the two leads, who come across each other through a series of coincidences that they struggle themselves to hide their secret. Nitesh Pandey, cast as Sumi’s father, brings the necessary warmth, creating a solid context for the girl’s struggle for acceptance. There’s also Seema Pahwa, Sheeba Chaddha, Lovleen Mishra, Shashi Bhushan, Chum Darang and Deepak Arora adding to the joint family banter and chaos that’s become a staple for these films. Once they get married, they shift to a new place around the outskirts, far from the city to stay away from society’s stereotypical gossip as they start meeting their respective partners.

“Badhaai Do” drives home its message without breaking into song and dance sequences; even when the film does go for musical montages, they’re there to push the narrative forward by establishing key developments in the protagonists’ lives. For instance, when Sumi’s newfound love, Rimjhim (Chum Darang), a pathology lab assistant, moves in with her, the film establishes it through a kind of montage sequence that’s otherwise so often used for setting up heterosexual couples.

Also, Read – Shardul Thakur Comes Out Of The Closet: A Nuanced Portrayal Of Queerness In Badhaai Do

The film, unlike so many other Bollywood films that pretend to be socially inclusive, actually casts a North-Eastern actress for the role of Rimjhim- a stunning Chum Darang. This was not only refreshing to see, but there’s also a scene where Sumi and Rimjhim sit and have a discussion about the former’s past and her plans for an ideal future. Watching such a laid back scene seemed like a breath of fresh air when most queer films- both in Bollywood and across other industries overseas- tend to show their central couple as caricatures who can’t seem to get off their partner, in an attempt at showing what crossing ‘bold’ boundaries in cinema look like. There certainly are scenes of similar semblance here, but they very adroitly subvert the conventional Bollywood tropes.

The screenplay by Suman Adhikary and Akshat Ghildial is sensitive, never being inclusive for the sake of it. The attempts at witty banter don’t always work, but the otherwise well-established characters and the approach at filmmaking awakens your empathy without ever bluntly manipulating it. Shardul might be gay, but he’s an all pumped up police officer that’s conflated the idea of masculinity and what society asks of them, with his feelings towards gender. Rajkummar Rao remains the standout, playing Shardul with the perfect balance of egoism and empathy. But the part that made me fall in complete love with the film wasn’t his performance, nor was it Bhumi Pednekar’s effortless persona.

There’s a point towards the ending of ‘Badhaai Do’ where the family dynamics surrounding both Shardul and Sumi look rather grim. As the two characters sit at a house ceremony in a packed living room, the growing distance between them and their families becomes evident. Both Sumi & Shardul end up finding love outside their marriage, but will their families accept this one aspect of their lives? The film cuts to a fade to black. I waited for the theatre lights to turn on. But then we again cut to the same scene characters sitting exactly where they were. Sumi’s father asks Rimjhim to go sit next to her daughter, to truly complete the ceremony. Through bare minimum dialogue, the staging in the last scene of “Badhaai Do” shows us how the true meaning of life can only be discovered through the acceptance of loved ones around us.

The film doesn’t pretend that it carries the onus of doing justice to the queer community singlehandedly, even if it kind of does that by showing a pride parade across the highway of Dehradun. But the cast and crew recognize that this is a constructive step towards creating a positive inclusive outlook in a larger sphere; a huge step in mainstream storytelling in an otherwise perpetual cycle of musical romanticism that the industry churns out every year. Seeing some of the online discourse criticizing the film saddens me. I couldn’t help but think how corrosively our aversion towards looking down upon “didactic social films” itself comes from a deep-seated place of privilege where we carry the ability to judge multiple films from different cultures at once. “Badhaai Do” never pretends to be anything it’s not, which precisely makes its impact of such great salience. The sensitive treatment of the queer subject in the film is commendable but more than that the filmmakers need to be credited for keeping it Indian.

Related to Badhaai Do Ending Explainer;

Badhaai Do [2022] – Ending and Themes Explained