Memento Movie Ending Explained & Themes Analyzed: Jonathan Nolan published a short story by the name “Memento Mori” in the Esquire Magazine in March 2001, which had served as the premise for his brother, Christopher Nolan’s mystery-thriller film, Memento. This film, Nolan’s second after he broke into the world of Hollywood with his neo-noir crime thriller, Following, in 1998, premiered at the Venice International Film Festival in September 2000 and was later released in theatres across the USA on 16th March 2001. Produced by Suzanne and Jennifer Todd, the film is 113 minutes long and takes its audience for a ride through the realms of memory-making, trauma, identity, and revenge.

Complex in their own ways, Nolan manages to hem these themes into the fabric of the film using a non-linear narrative technique and intercuts. More interestingly, Jonathan Nolan, who designed the official website for Memento, carefully left around clues to provide hints into the story but no concrete information about the same. This marketing strategy riled up the audience’s interest, especially when random people received a copy of the polaroid picture featuring a shirtless Leonard, the protagonist in the film played by Guy Pearce, pointing towards a bare area on his tattooed chest.

The film was, undoubtedly, a box-office success, and it went ahead to receive Nolan his first two Academy Award nominations and one Golden Globe nomination. It has also been lauded as Cristopher Nolan’s best work in the 2000s. Steven Spielberg went ahead to hail Cristopher Nolan for his “masterworks” Memento and Inception, a 2010 science fiction-action film.

His works mostly juggle the concepts of past, present, and future. They are interlaced with the idea of construction of time, memory, and metaphysical themes, including human morality, in the face of this shifting reality. Many critics assign them a “Nolanesque” quality of their own. Memento, despite being an early film from his career, can be quizzical and complex for a first-timer watcher. Hence, we have come up with an essay that explores its themes in detail and explains the techniques used in the film, trying to answer the most asked questions about the film to help you understand the movie better. Happy Reading!

We first come to know that Leonard Shelby is suffering from a condition known as anterograde amnesia, making him unable to generate any recent memory. He is a former insurance agent who currently lives in a motel room, and we find him speaking to an unknown caller on the telephone line. He tattoos his body with facts and reminders and clicks polaroid images of his people and surroundings, with notes written behind each of them, to keep him working towards his ulterior motive – revenge for his wife’s murder.

He tells the story of Sammy Jankins, a case of short-term memory loss that he investigated soon as he started working as an insurance agent, to this unknown caller. He explains why he believed Sammy was bluffing his condition and went ahead to earn a promotion by successfully proving the same. The caller insists they meet in the motel lobby and, soon after, we are introduced to Teddy, a guy from Leonard’s photographs, who then tags along with Leonard, as he goes from place to place in pursuit of John G, who he believes is responsible for his wife’s death.

He knocks off Jimmy Grantz, a John. G, and soon after, he leaves to meet Natalie, Jimmy’s girlfriend and a bartender, in his clothes and car. We come to know that Natalie and Teddy are both manipulating Leonard’s condition to their advantage but is Leonard innocent in his game of manipulations? The truth – the climactic scene where the reverse storytelling and intercuts come together – is both enlightening and scary for the possibilities of miscalculated acts of revenge that Leonard’s actions might breed in the future. It leaves us wondering whether memory must form the ultimate base of our experiences.

Who is the real killer in Memento?

As we find out at the end of the film, Leonard is the real killer of his wife whom he has overdosed with insulin, a story that he then projected upon his memory of the case of Sammy Jenkins to rid him of the guilt. The attackers, who caused anterograde amnesia in Leonard, attacked his wife, raping but not killing her.

In fact, Leonard has already been helped by Teddy, an undercover cop, to hunt down and kill their attackers. However, due to Leonard’s condition, he doesn’t remember about it, and we find him being manipulated by Teddy, and later by Natalie, to hunt down the men with initials J. G. for their own quest of revenge and retribution.

Why was Teddy using Leonard?

Teddy is an undercover cop who had been originally involved in Leonard’s case since the attack left him with anterograde amnesia. He had already helped Leonard track down and kill the attackers who led to his condition. However, due to Leonard’s inability to make recent memories, he continued to be in search of men with the initials John.G.

Considering this, Teddy took advantage of Leonard’s condition to help track down criminals with the same initials and offer some “street justice” in the process. He reveals his own initials as John. G, a piece of information that then drives Leonard to go back in a circle and kill him to help Natalie avenge his boyfriend’s death.

According to Leonard, Sammy Jenkins was one of the cases he handled as an insurance investigator. He had the condition of short-term memory loss, and Leonard believed that he successfully exposed Sammy as a fraud. According to Teddy’s account, Sammy Jenkins was a real person whom Leonard had helped expose, but he did not have a wife or murder that fictional wife with an insulin overdose.

Leonard’s memory had projected his story upon Sammy’s to help deal with his guilt of having accidentally murdered his wife. That way, every time he remembered his deed, his memory led him back to Sammy’s story.

What condition does Leonard Shelby have?

Leonard Shelby in Memento has anterograde amnesia, a condition that prevented his brain from making any new memories after an amnesia-inducing event. It often involves either partial or complete inability to make new memories.

Leonard is motivated by revenge throughout the film. He is on the lookout for John G., the guy whom he believes has raped and murdered his wife. It, then, forms the biggest driving point in the film. However, soon enough, we find out that Leonard is helping out Natalie, who has been wronged by someone and has lost someone precious to her. 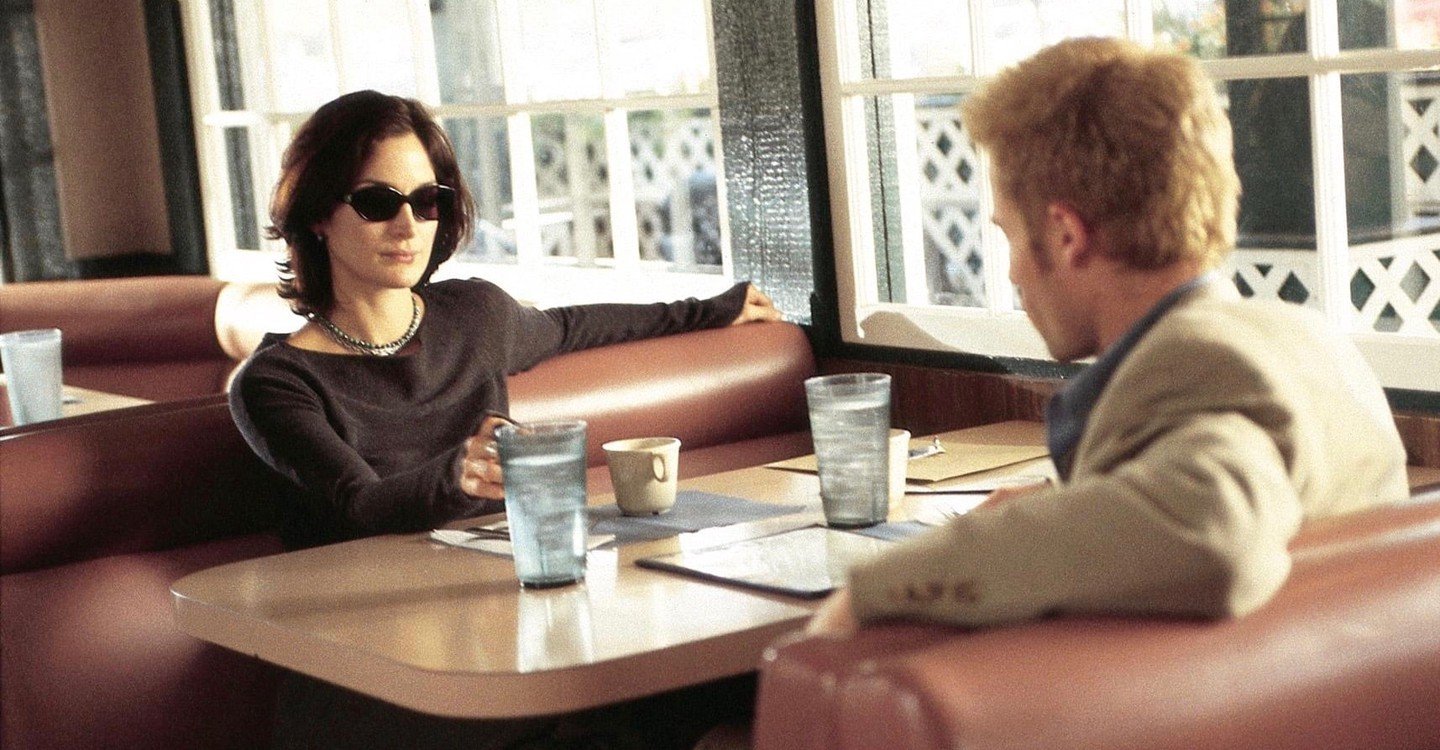 In the end, we finally understand that Leonard has already had his share of revenge on his attacker. However, by the time the film ends, we come to know that it was Natalie who was manipulating him because of his condition to help her get through to her lover’s murderer, Teddy, in this case.

We are talking about physical and mental trauma in this film. The trauma suffered by Leonard after the attack, left him physically disabled with a condition of anterograde amnesia. This condition impacted his mental capabilities since he lost the capacity to make new memories.

Further, Leonard’s accidental murder of his wife is a kind of trauma so difficult to fathom for his mind that it had projected his story upon the case of Sammy Jenkins, a person with short term memory loss who he had investigated as a fraud during the early days of his career as an insurance investigator. The effects of this trauma resurface in the form of overlapping memories, scenes of him pinching/injecting his wife, and of Sammy/himself sitting in a wheelchair at a mental institution. However, his mind trains him to believe that Teddy is lying, ultimately shaping him as the object of his revenge.

There is a lot of conversation around memory in the film, the most remarkable being Leonard and Teddy sitting at a diner with the former explaining how memory is unreliable while facts are really what drive investigations. The irony of this sentence is not lost on us since we come to know at the end of the film how facts are manipulated by individuals to suit their cause.

Further, Leonard’s condition of anterograde amnesia links literally to the capacity of memory-making in human lives. The question arises, is memory linked to one’s identity? Leonard is who he is in the film because of his condition that tampers with his memory. However, he is a version of his past life as well, before the attack took place that is, which might not have been governed entirely by memory. Nolan brings us to a complex juncture with this theme and lets his audience mull over it after the film’s climax scene presents Leonard intentionally tampering with how his future memories might shape out to be.

We get to know that it is his guilt that made him project his own story over the case of Sammy Jenkins, a real-life case of insurance fraud that he had investigated earlier in his career. Teddy tells Leonard that he lies to himself to keep him happy with the knowledge that the attacker John G. had murdered his wife, he can forever thirst for revenge. However, Leonard is not convinced about Teddy’s explanation, and he thinks that he is trying to confuse him with words until his memory lapses again so clicks a picture of Teddy, whose real names also have the initials John G. and marks him as a clue for himself which he then sets out to uncover and murder.

This means that Leonard finally tampers with his own understanding of the events, making Teddy out as a false clue, and sets out to get Teddy’s number plate tattooed on his skin. This leads us to understand why the film began with a shot of Leonard shooting Teddy after looking at his polaroid image with the caption – Don’t believe his lies.

Intercuts refer to the juxtaposing of one shot or scene with another contrasting scene. This juxtaposition generally fuses scenes in two contrasting locations. It differs from a montage, which doesn’t come back to the same scene again. Shots in a montage are much shorter in span than an intercut.

In Memento, one part of the story, which is happening in the present, moves in reverse chronological order, while the other part shot is black-and-white takes place linearly in the past. When we watch the film, each colored scene is juxtaposed constantly against a black-and-white scene. This leads to an intercutting of two distinct timelines that last till the conclusion of the film, until its climax when Leonard, who has just knocked off Jimmy Grantz, takes a polaroid picture of his victim, and when the photo develops, the black-and-white frame merges into a colored setting, thus bringing both the distinct parts of the story together at one point.