Annette Movie Ending Explained & Themes Analyzed:: Leos Carax has once again summoned a confounded viewer trying his best to deconstruct his cinematic marvel. The musical stars Marion Cottilard and Adam Driver in leading roles, although, the real protagonist is the film itself. At times endearing, others frustrating, ‘Annette’ is a mixed bag and instantly a conversation piece for purists. There are so many moving parts in Carax’s narration that a meditative examination almost becomes impossible. With all the things it tries to do, ‘Annette’ comes across as a whole lot of everything about nothing.

Is it a love story about two people tortured and pushed apart because of their insecurities? Is it a film about a narcissistic, envious serial killer who cannot see his stardom repulsed? Is it a revenge drama where the ghost of a fallen lover sees that her murderer meets justice? No one can say. At this point, I’m not sure that even Carax would be able to give a worthy explanation. ‘Annette’ wears many hats during its runtime. The sheer intensity of its execution sees a lot of things get lost in translation. This piece answers some of the key questions that you might still be wondering about. Happy reading!

The two main characters of the film are Henry, a divisive and high-performing standup comic, and Ann, a trained opera singer considered a doyen of her art form. The two fall in love and have a baby together, whom they name Annette. With her coming into their lives, the professional promise of the two takes contrasting turns. While Ann achieves global fame touring the world, Henry’s career declines, especially after his on-stage meltdown and staying back home with Annette. 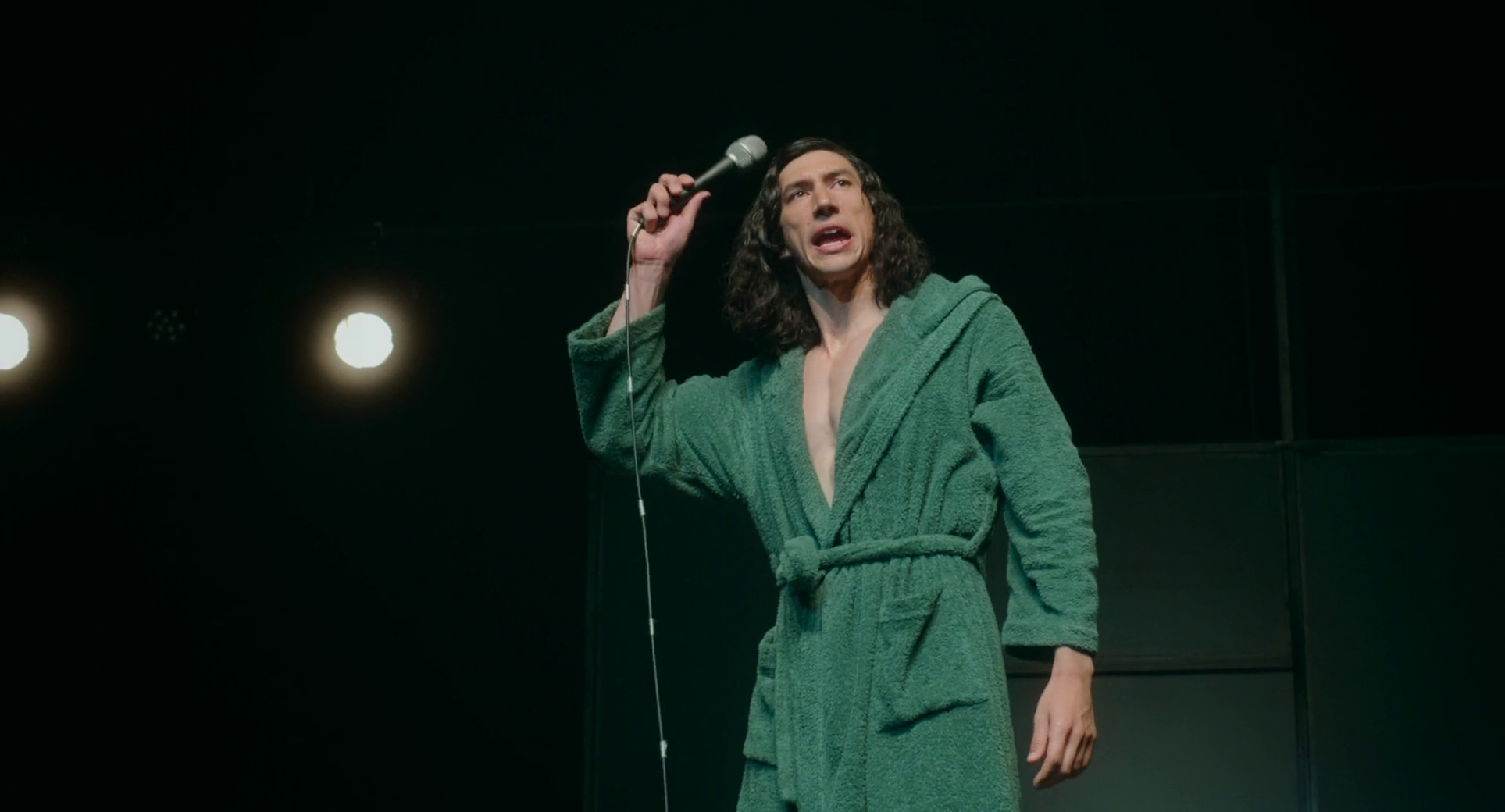 The two drift apart as a result, with growing frustrations towards each other. Ann is marred by nightmares of Henry’s past violence; Henry’s resentment is directed towards Ann’s success. The two then take a pivotal cruise trip together to rekindle lost love. After Ann is accidentally thrown overboard and dies, the film takes a drastic turn as Ann returns to haunt Henry through their daughter, Annette.

How Does Ann use her daughter?

Ann holds Henry guilty for the disintegration of their fairy tale love. The nightmares she has of Henry on the verge of killing her like his previous female victims embellish the paranoia in her mind. His changing behavior and response to her success convince her to believe that he might hurt her in some manner.

The entire sequence of the two unwinding on the cruise and the falling over of Ann into the sea has a palpable tension. The buildup is centered around the intense emotions of the two characters. It is almost like a game of chess. Understanding what moves the other is about to play becomes key to dislodging any chance of personal harm. But when the inevitable happens, Ann’s spirit takes revenge on Herny through her daughter.

Already in the form of a puppet, Ann lends it her voice, which will be a piercing reminder of what Henry did to her. It might as well be an attempt to redeem the lives of other women like him whom Henry had been unkind to.

What is the deal with Henry’s jaw?

Henry’s birthmark has become an interesting talking point. As the movie progresses, it becomes bigger and even more noticeable, to a point where it spills over into unpleasantness. It strangely matches Henry’s changing attitude and the perception of the viewer towards him.

In the absence of any clarification from Carax, let us dive in to explore what it could possibly mean. The very first time we see it is during Driver’s first standup performance. At the time, it seems just an ordinary facial feature.  The phase of Ann’s success and after Annette’s birth, we see it growing, in size. Her nightmares, the night at the cruise, it becomes quite apparent that its size increases as Henry’s dark conscience unravels. 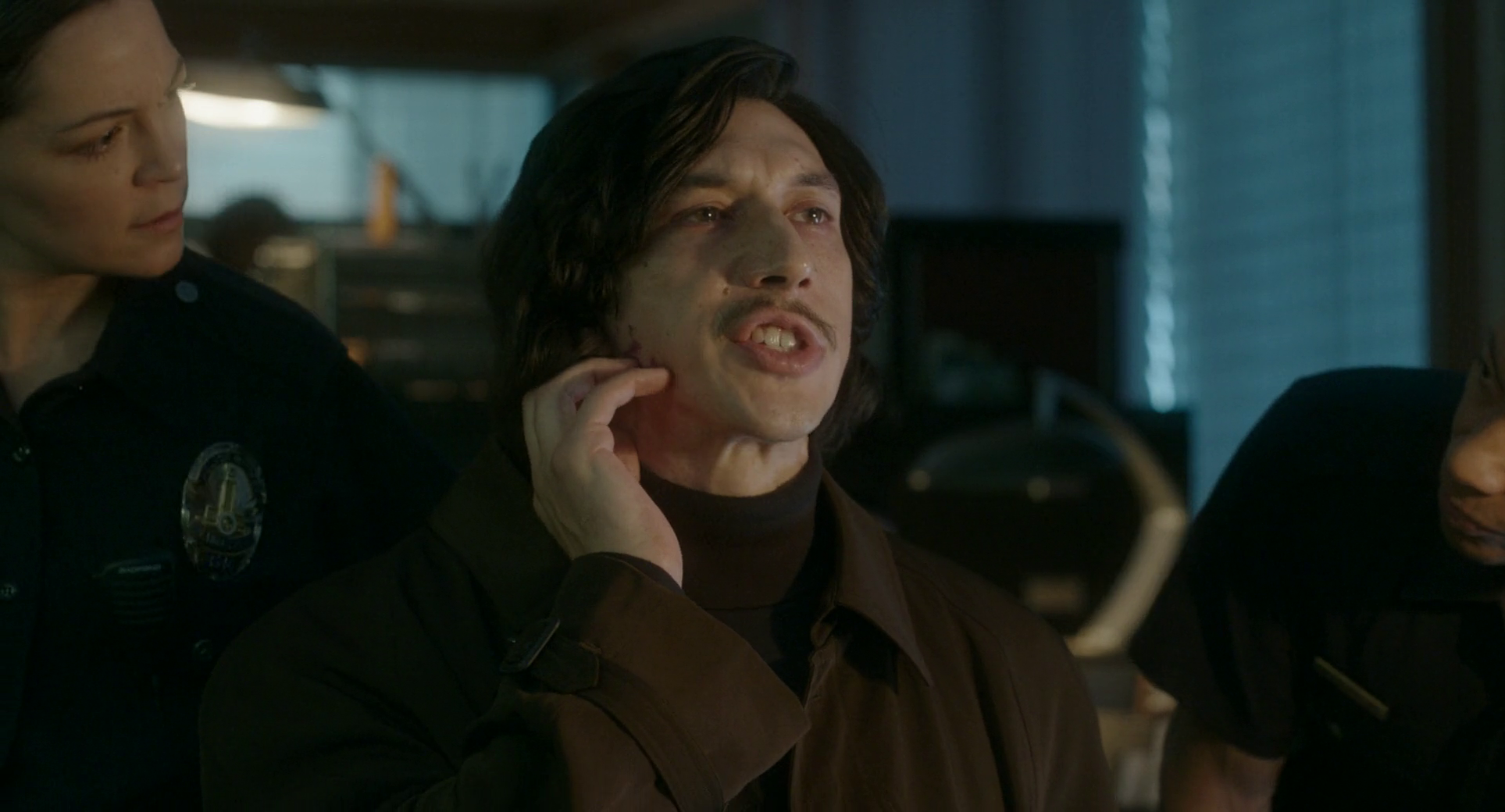 He is seen nervously scratching it when questioned by the police officers, which at times is a telltale of liars, as Dwight Schrute (‘The Office’) would postulate. The similarities of the mark can be found in certain other works of art that deal with guilt. In ‘Macbeth’, the fallen king cannot seem to get the blood of the innocents he murdered off his hands. In ‘The Machinist’, Bale’s character’s skin and physicality darken and diminishes as he comes to terms with what he did all those years ago. Henry’s deterioration as the film progresses is represented by the facial mark that creeps up to his nose as the film ends.

What is Baby Annette and why is it a puppet?

Baby Annette can be described as a doll at first. It gradually transitions into a puppet, and finally, a living human being. It is “blessed” with the angelic voice of her dead mother, who gave it to curse her husband’s soul. What was meant as a blessing and the trigger for neverending happiness for Henry and Ann, turns into a malaise that destroys their lives.

Carax never provides a reason for using the baby as a puppet. Visual semantics aside, I feel he makes an impressive point about the nature of consumerism and the voyeuristic nature of today’s commercial world. Henry’s use of the small baby to earn money encapsulates the desperation that grips fledgling parents today. Shameless ransoming of their children to shows, something like ‘Magnolia‘, imprisons the kid’s ability to be a kid. They can never get the sanity and insanity that accompanies this time of our lives.

The ‘Pinnochio’ undertone is quite clear with how she comes alive in the end. It also metaphorically suggests that now, her life is her own. She is the one who calls the shots and controls her destiny. The freedom to experience life now has set her on a new path and she is never looking back.

Guilt is inseparable from suffering. The two usually occur in this order but not on those occasions where innate suffering makes way for a realization of guilt. Henry is an embodiment of the same. His realization comes far too late, the lack of which pushes him beyond the contours of sanity. 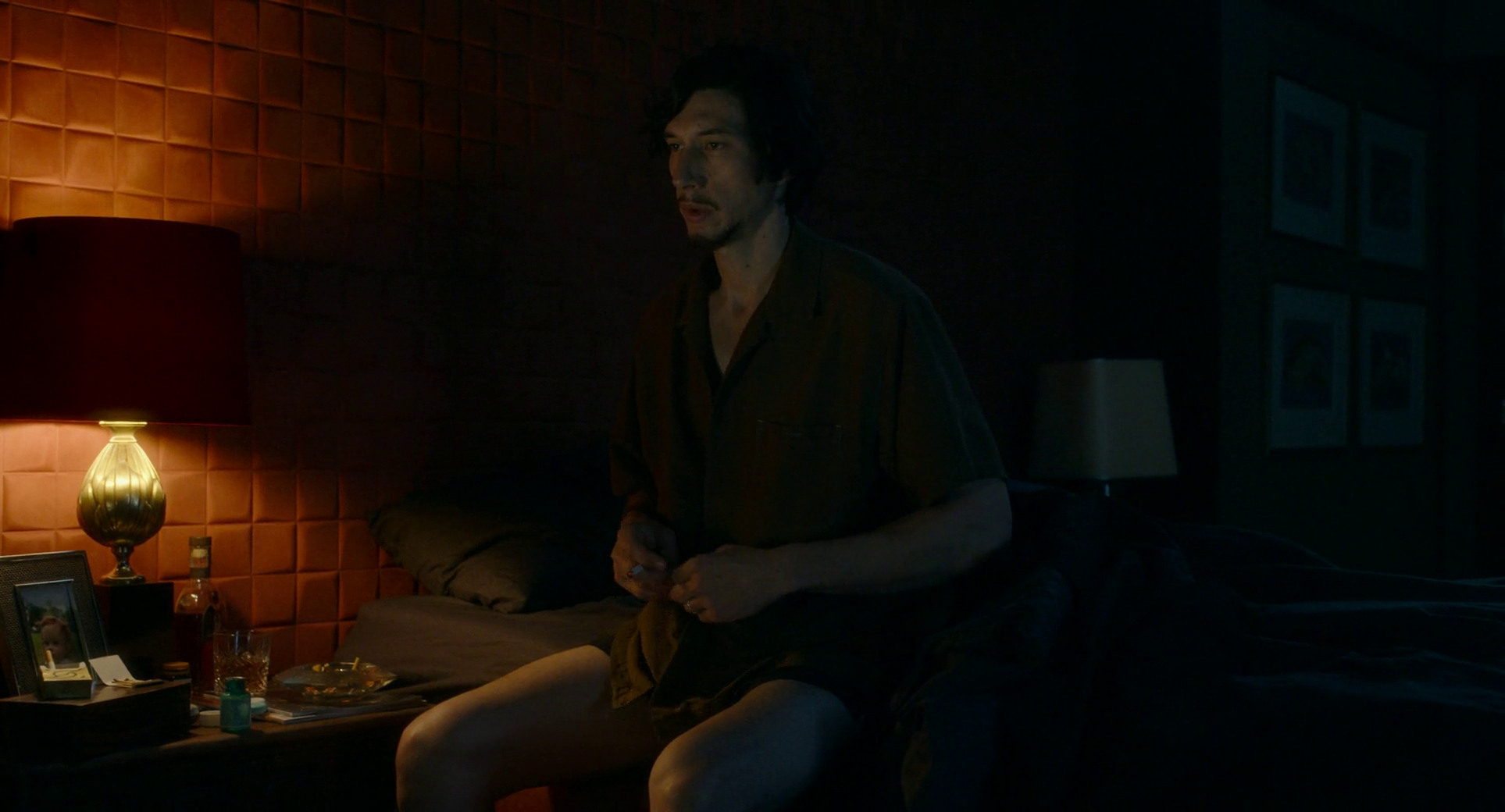 His incredible breakdown serves as the perfect pitch for vengeance for Ann. There are no comparable make protagonists in recent cinematic history that have so miserably fallen from viewer favor like him. Baby Annette’s introduction turned the tide against Henry. It took the narrative in a direction that would inevitably become his guilt’s physical manifestation.

The Annihilating Nature of Narcissism and Masculinity

Carax’s protagonists often turn out to be proxies of the director himself. Many a time, distinguishing himself from the character becomes a hard job during the writing process to his own admission. A cumulative look at his leading men reveals their tendency to use an overt sense of masculinity to assert their dominance and pacify their narcissistic urges. Henry’s resentful and tepid showcasing of Ann’s success lays bare the kind of person he is in real life. His non-assuming and carefree attitude, even more, highlighted due to his profession, comes undone as jealousy grows.

Carax lends incredible fluidity of motion to Henrey’s character. His introduction gives the impression he is a boxer getting ready before a bout. The attire he dons, the spring in his steps present Driver’s Henry as an indomitable force not to be messed with. The summation of his personality is more of a sum of parts, rather than something wholesome. And Carax exploits it till the last drop. 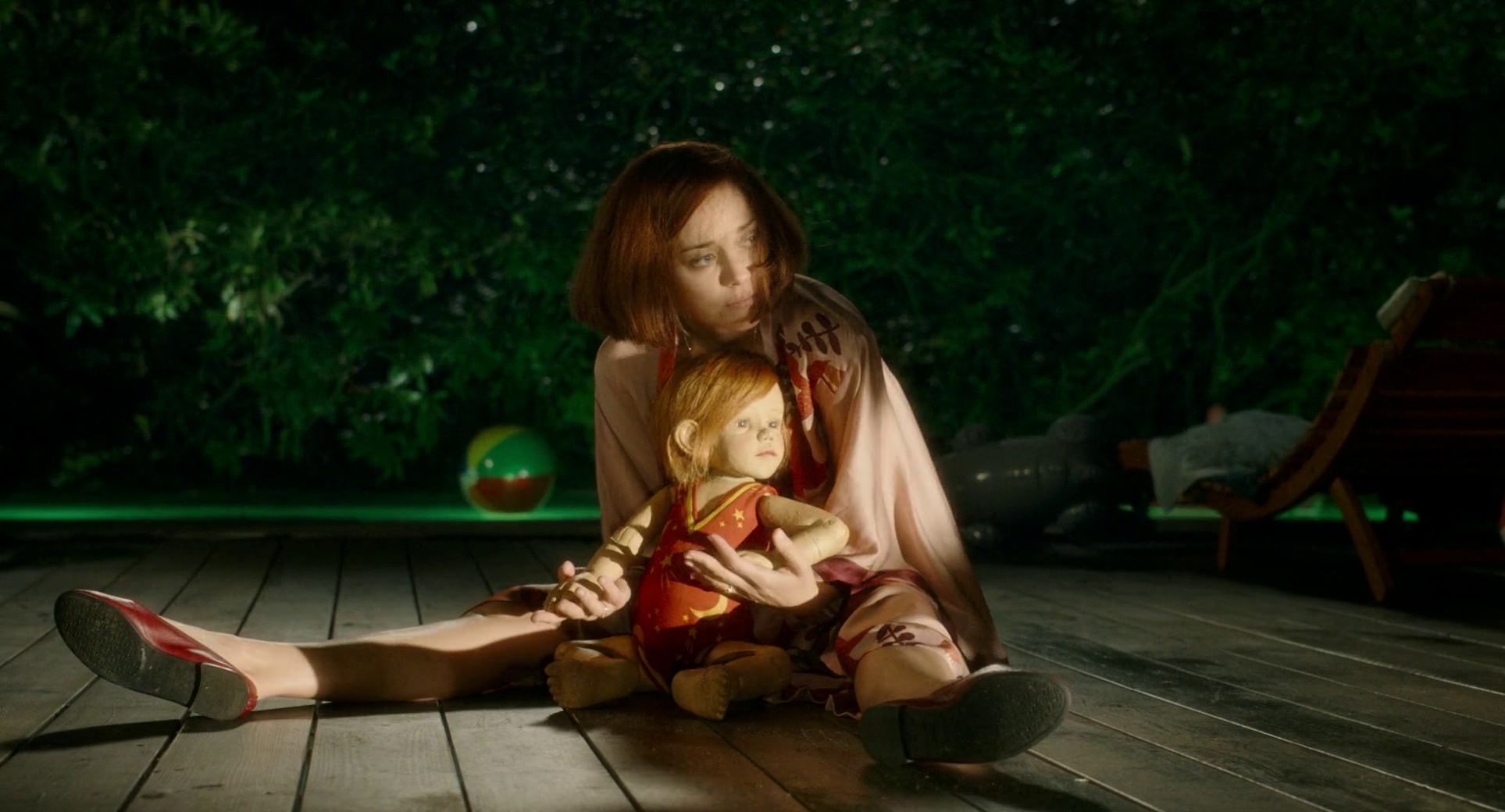 The ending of ‘Annette’ is not only emotionally cathartic but also really confusing. Henry is apprehended and convicted of murder when Ann’s ghost outs her. He is sent to prison and Annette visits him, as a living person.

The very ambiguity of what lies ahead for Annette defines the breaking of the shackles she found herself tied to. Carax’s critical examination of the world of fame and its devastating effects on families as a unit closes with Annette discovering life on her own. Devoid of any limelight, she is free to tread her own path, no longer influenced by any of her parents.