The first thing that would spring to your mind while watching Netflix’s new binge-able thriller ‘Stay Close’, at least for the first two or three episodes, would be ‘How are they going to explain all these within the scope of five or six episodes?’ The miniseries is based on Harlan Coben’s novel by the same name. It is part of a deal between Coben and Netflix which involves adaptations of fourteen of Coben’s works. ‘Stay Close’ is the fourth instalment of that after the releases of ‘The Stranger’, ‘The Woods’ and ‘The Innocent’.

From the very first moment you lay eyes on the seemingly perfect life of Megan (Cush Jumbo), you would be remiss to not sense the tantalising lure of mystery surrounding her and her life. The surefooted possibility of the proverbial appearance being deceiving does not take much time to materialize. Within the first couple of minutes of the first episode, we would learn that there is dirt in Megan’s past life when she used to go by a different name. This would obviously lead to the required confrontation and set the wheels in motion for the story, as Megan starts her adventure to keep her family unaware of what she thinks of as the stench of her past.

Also, Read – Only Murders In The Building [2021] Review: Cherish This Fresh Blend Of Investigative Drama And Comedy

This main thread brings multiple other threads across. Megan’s old flame of her past was Ray Levine (Richard Armitage), currently a paparazzi for hire photographer, perpetually bedraggled and clearly at a lower point of his life. The reason for the abrupt end of their relationship, and the consequential beginning of the second life Cassie as Megan is a man named Stewart Green, whom Megan believed to be dead, and the police believed to be missing. Green however seems to have returned though, as Megan is warned by a former colleague of hers, Lorraine (Sarah Parish). 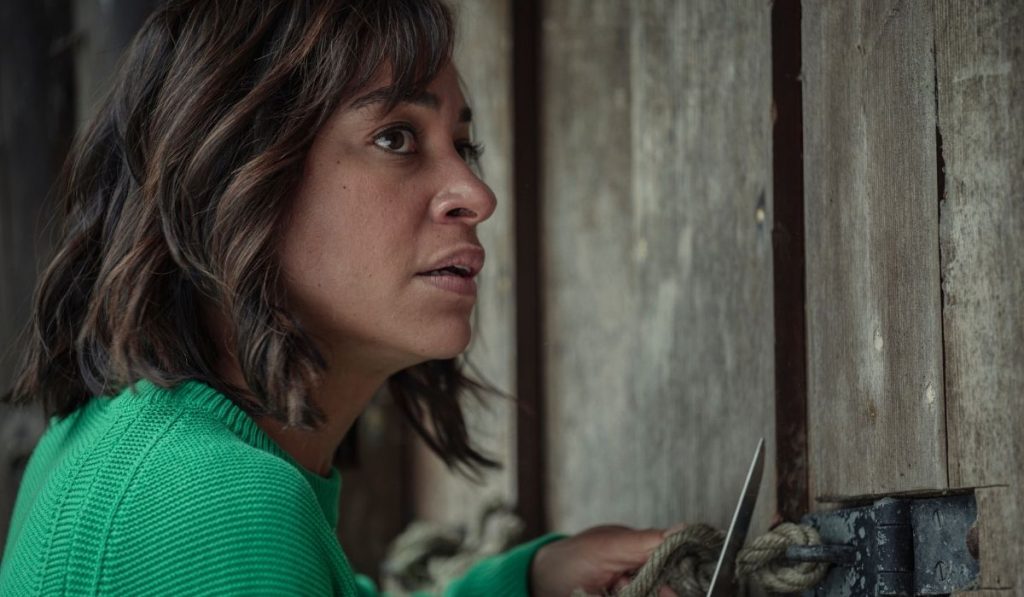 The police, namely detective Broome (James Nesbitt) and detective Cartwright (Jo Joyner) are also investigating the disappearance of another man, exactly seventeen years after the seeming disappearance of Green. Broome is convinced of a connection between the two disappearances as they both happen on the same date and near the same pub. As if to corroborate on that, we, the audience are shown another conclusive and mysterious detail. Just before his disappearance, the new missing person, Carlton Flynn had been seen with Kayleigh (Bethany Antonia), eldest daughter of Megan.

It is evident by this point, there are more than one mysteries to keep us hooked in ‘Stay Close’. Directed by Daniel O’Hara and Lindy Heymann, the show traverses from one mystery trope to another. There is the obvious past being dredged up to ruin the present, then there are a plethora of possibilities of a memory lapse, the mystery of a dead man coming back to life, the possibility of a serial killer on loose. And just when you think you have seen enough, there is a pair of intriguing and creepily sadist hired guns. They break into dance routines on a musical version of ‘Creep’ by Radiohead, clearly to underline their nature.

When you incorporate so much, you run the risk of convolution and confusion. And ‘Stay Close’ does get convoluted and confusing at a certain point. There are so many threads that were laid that it is bound to get entangled. But credit must be given for it manages to, somewhat bunglingly as it is, to tie up all the loose ends and present a fairly complete picture of the mystery. That would satisfy the viewers, especially if they have a soft spot for the genre itself.

Performances by the actors are earnest. Cush Jumbo carries most of the burden as the conflicted Megan, desperately trying to make her newfound happy life intact. Richard Armitage brings the well-crafted sympathy in the story and James Nesbitt the occasional humour. Most of the other actors get their chances as there is almost a secret per character in the story, and they do well respectively. The eight episodes are fast and the lush British countrysides are captured well. If novelty is something that you are not looking for, then you would find this series breezily binge-worthy.