Repetitions and mild variations are staple elements in South Korean auteur Hong Sang-soo’s works. It’s not that Mr. Hong is using these two elements in order to fine-tune the narrative and offer a greater meaning. The film-maker simply sees repetition and variation an inherent part of the modern existence that can be either transformative or rhythmic. In a way, each work in Hong Sang-soo’s oeuvre can be termed as a ‘retelling’. Retelling in Hong’s cinema happens on two fronts. One is the thematic recurrence, and the other involves the choices made regarding narration or imagery. Realistic representation of relationship troubles could be zeroed-in as Hong’s thematic preoccupation. But it’s not just that.

Beneath such thematic repetition lies the more important feature of Hong’s works: self-reflexivity.  The self-reflexivity in Hong’s cinema doesn’t just focus on the filmic discourse, but also widely calls to attention the limitations of a film-maker who draws on their own experiences to make stories.  Shuji Terayama in Throw Away Your Books, Rally in the Streets (1971) and Pastoral: To Die in the Country (1974), Fellini in 81/2 (1963), Charlie Kaufman in Synecdoche, New York (2008) have incisively dealt with such self-reflexive quagmire. But no one – apart from Kiarostami and Godard (whose self-reflexivity is a bit didactic) – has tackled this subject as extensively and distinctly as Hong Sang-soo.

Related to The Woman Who Ran: Hotel By The River [2018]: ‘TIFF’ Review – A Surprisingly Endearing Heartbreaker!

Mr. Hong’s movies, similar to that of Yasujiro Ozu, Aki Kaurismaki, and Jim Jarmusch, could be condensed into few basic elements. Though the film-maker’s thematic concerns and style of film-making more or less reminds us of Eric Rohmer. Lately, a significant transition in Hong’s cinema has occurred due to collaboration with Kim Min-hee, his muse and partner. The Woman Who Ran (Domangchin yeoja, 2020) is his seventh film with Kim Min-hee, and with each work Hong seems to be cultivating thoughtful and profound female perspectives.

Hong has really come a long way from his treatment of women in Virgin Stripped by her Bachelors (2000) or On the Occasion of Remembering the Turning Gate (2002) to The Woman Who Ran which is arguably his most women-centric work. In On the Beach at Night Alone (2017), he tried to demolish his own ego as a film-maker by laying bare his personal conflict: his affair with Kim Min-hee that stirred up a media frenzy in South Korea. At the same time, Hong approached the narrative from the perspective of Young-hee (played by Kim), a female actor fleeing South Korea to a small German town after the revelation of her affair with the older, married film-maker. 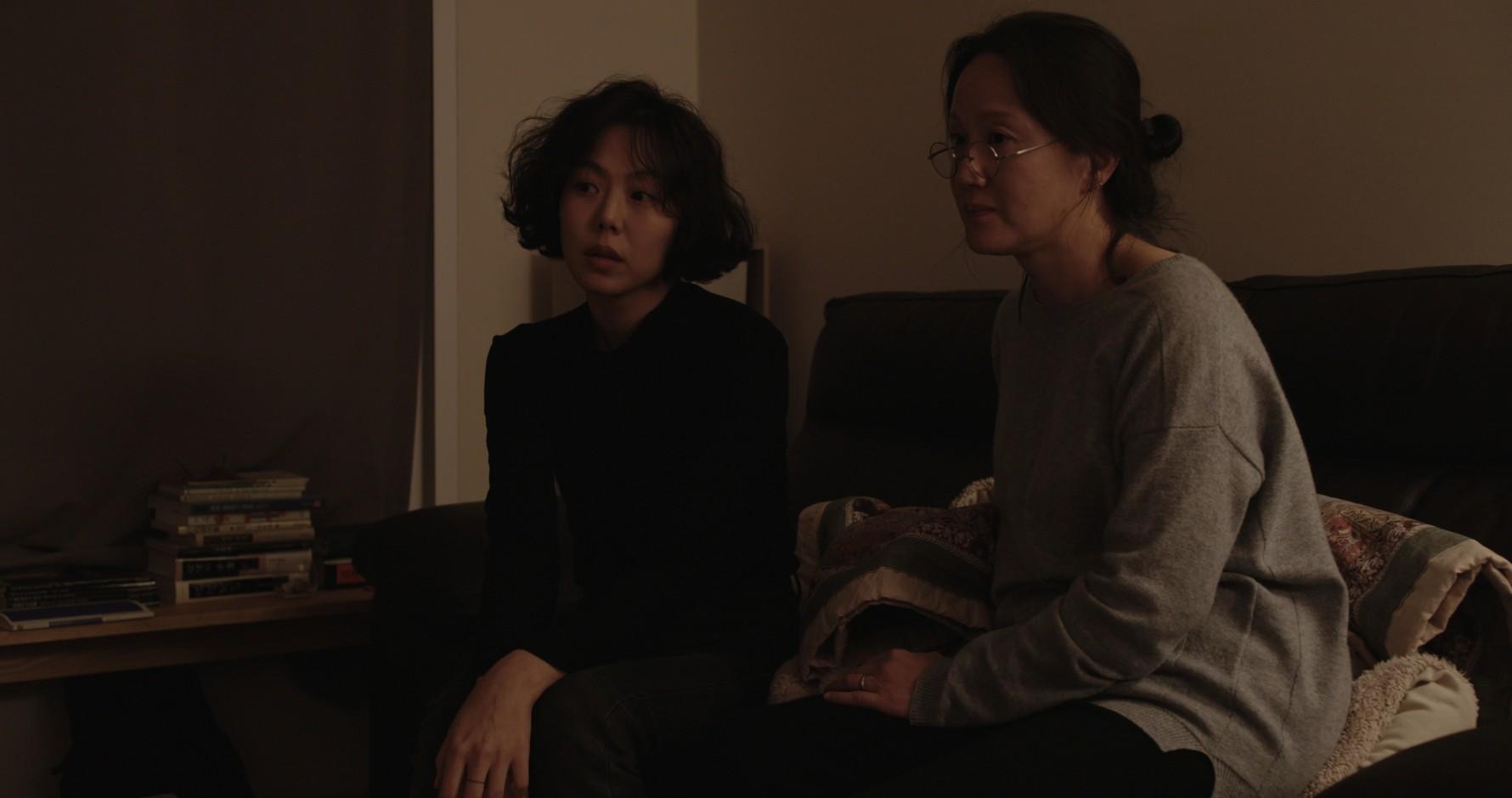 On the Beach at Night Alone somehow encourages us to pass judgment on Hong, but empathizes with the female actor’s predicament without donning a dramatic lens. The Woman Who Ran has a more trivial plot-line. Gam-hee (Kim Min-hee), a married florist, visits, and converses with three of her friends living in the outskirts of Seoul. As usual Hong Sang-soo interleaves the three segments with repetition of situations and dialogues. Gam-hee reconnects with a trio of female friends, eats, drinks soju, and talks about their own lives in a mildly detached manner which nevertheless brings to attention the sadness, yearning, and disappointment lying beneath. The most intriguing repetition, however, is the unexpected intrusion of men, who in some form kindles the women’s anxiety. In fact, the three awkward and tense conversations involving the passive-aggressive men display Hong’s trademark blending of pathos and humor.

The aesthetics of these episodic encounters are as usual limited to muted tones, highlighting personal isolation, and static shots of confined spaces that are offset by occasional zoom-ins which often happen mid-way through the interactions. But then like any Hong’s works, The Woman Who Ran is a narrative of ‘lacking’. The conversation often revolves around emotions not clearly expressed within the frame or about people not present. Through the reiterations and mild variations, Hong not only tries to depict the rhythms of routine life, but his perfectly calibrated storytelling invites also us to extrapolate meaning, although such an effort can be elusive at times.

The caged chickens, the nonchalant cat, and the unconfined crow may be an embodiment of some metaphor. The narration of the rooster attacking hens’ soft spot pushes us to draw an obvious meaning, but it can just as be a context-less narration of a rooster’s irritable behavior. Who is the eponymous character? Is it the mother of that stressed-out 26-year-old woman? Or is it Gam-hee who deep down yearns for a change after five years of marriage despite parroting her (unseen) husband’s romantic conviction that, “those who love each other should stick together”? Or maybe it denotes the first friend Gam-hee meets, Young-soon (Seo Young-hwa) who has divorced her famous director husband. For that matter, it can represent her other two friends too: Su-Young (Song Seon-mi) and Woo-jin (Kim Sae-byuk) emotionally distant from the men in their respective lives. Maybe it refers to any woman dodging fantasies and imposing perspectives of men. 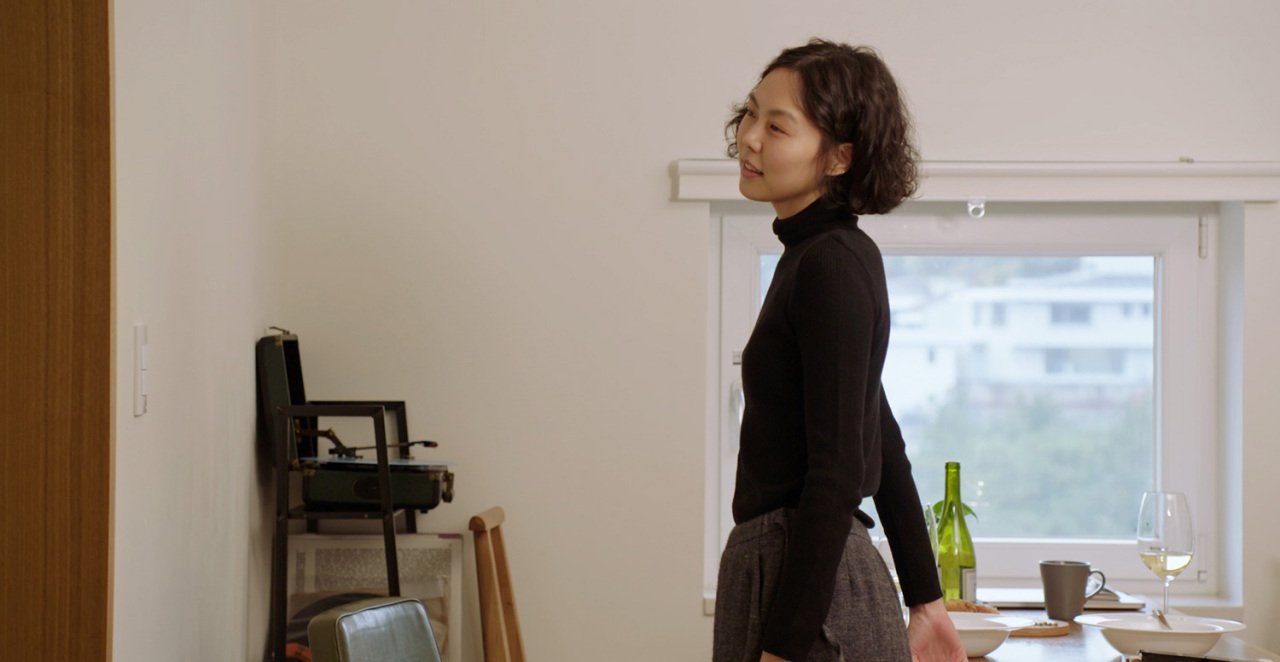 Since Hong Sang-soo’s cinematic universe is often packed with people making a mess of things – including sleeping with the wrong people and overdrinking – Gam-hee’s proclamation of a loving relationship with her husband seems to be a façade. What Woo-jin says about her egotistical writer-husband (Kwon Hae-hyo): “He keeps saying the same thing. It’s absurd how he repeats himself. If he just repeats himself how can he be sincere?”, can evidently be applied to Gam-hee’s seemingly rehearsed platitudes.

Nevertheless, Gam-hee’s tranquil life with her translator husband, now on a business trip, can really be the truth. And yet these brief sojourns are made with an intention to reconsider her individuality or to comprehend what she wants out of life. Hong-Sang soo is trying to extend his compassion to these women trapped in the past and present while longing for emancipation in the future. But at the same time, through subtle tweaks, and small confessional passages, I feel Hong often plays up to our compulsion to connect dots and find meaning.

In her first interaction with Young-soon, Gam-hee when asked about her shorter hair, tells about cutting it herself in the bathroom, and later going to a hairdresser to fix it. Later, while dining and wining with Su-young, Gam-hee speaks about her failed flower shop, further adding how she has ‘too many interests though it’s hard to settle on one’.  While the three friends Gam-hee meets express the stasis and indecisiveness in their life, Gam-hee’s insecurities or vulnerability rarely comes to the surface or it’s only fleetingly glimpsed. Hong dismantles the artifice and perpetually reveals the messiness in the life of three friends. Hence we consciously anticipate the dismantling of Gam-hee’s supposed artifice; the sadness to pierce through her surface politeness.

But despite the invitation to speculate on the unspoken mysteries or assign motivations, The Woman Who Ran remains endlessly appealing due to Hong Sang-soo’s ability to instill considerable complexity into a seemingly simple tale.

Our Friend [2021] Review: A Predictable Story Elevated by Terrific Performances

"83": Authenticity At The Heart Of Netflix New Sports Drama