“That was the summer I got breasts and fought vampires,” recollects Shawna (Asjha Cooper), in Maritte Lee Go’s overwrought and twisted Black as Night, the second installment of Welcome to the Blumhouse Anthology, where she is a high-schooler from New Orleans with self-esteem issues. Soon enough, vampires are hunting in the city ravaged by Hurricane Katrina and it is Shawna, along with her BFF Pedro (Fabrizio Guido) and crush Chris (Mason Beauchamp) who become vampire hunters on the chase.

The vampires here arrive with striking red eyes and pointy teeth, and first attack a homeless man downtown while he is strolling a shopping cart packed with pop cans. He screams and screams while the vampires disembody him. The scene quickly cuts to a rooftop sequence where Shawna’s voiceover administers- a contrived narrative decision that not only sabotages the suspense but also pushes the movie into an entirely different territory of comedy that does not gel well with the narrative at all.

Related to Black as Night – Raame Aandalum Raavane Aandalum [2021]: ‘Prime Video’ Review – Political Satire has its heart in the right place, but little else

Together they visit Ombreaux Heights, which is the last housing project in New Orleans to remain after the devastation of Hurricane Katrina. Shelter for the downtrodden and the destitute, it is here where Shawna stumbles upon her exiled mother (Kenneisha Thompson), who is desperately trying to let go of her addiction. Again the scene jumps to a different set-up, where Shawna tries and ultimately fails to win over her crush Chris. She leaves early and then ends up attacked by the vampires. But crazily enough- she does not turn into one! 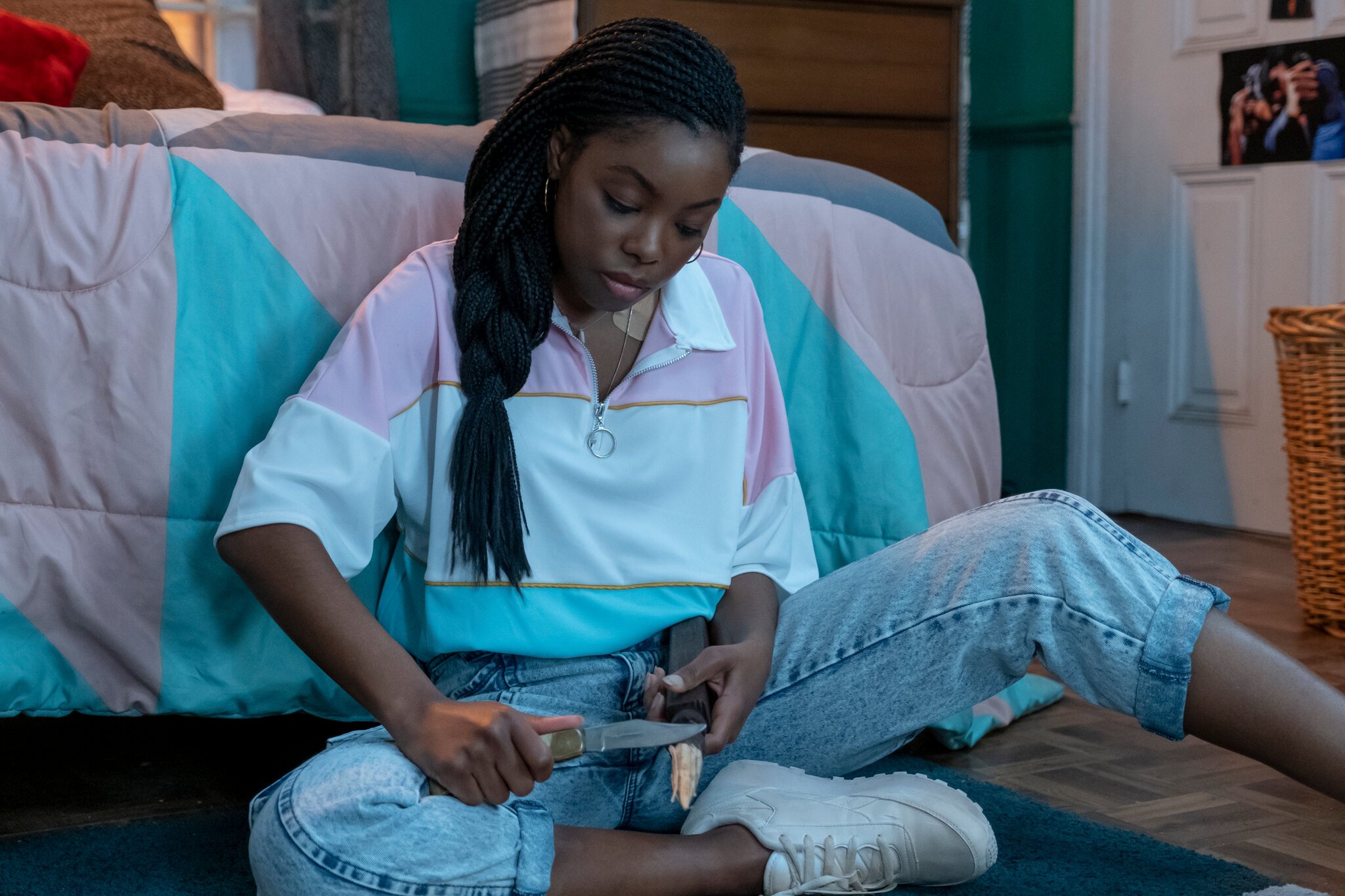 In the meantime, Shawna, Pedro, and Chris are aided by vampire expert Granya (Abbie Gayle) and together they team up to fight the vampires. Together, they must not only cleanse Ombreaux Heights of its fangled inhabitants but also find their way to their leader to turn all of them back to their original human form. The triggers for Shauna emerge on the way, as she confronts her feelings about her skin color and how she is constantly self-conscious that she is darker than the rest of the Creole girls at her school. Yet the follow-up to this identity crisis is dealt with without any nuance. In an encounter with a vampire, Shawna proceeds to wax her and explode her to ash. Finally, this helps Shawna to become white, temporarily. Suffice to say, it is as ridiculous on screen as it sounds on the page and is utterly pointless in its execution.

The group then learns about the legend of a former slave Babineaux (Keith David) who has a scathing monologue at the end that does not quite fit even in sync with the narrative twists preceding. David makes the most of his underwritten role and is easily the best part of the movie, trying to hold all the untied strings together in a way, although one wishes if the bend towards racial history as well as the socio-economic conditions of the destitute Black populace in New Orleans could have been delved deeper. The undertones of racial history are disappointing, to say the least.

Several of these inconsistencies are palpable; how Shawna’s coming-of-age tale with a wholly unnecessary romantic bend does not fit with the vengeance she seeks out in the wake of a personal tragedy by becoming a vampire hunter. Working with a script by Sherman Payne, Black as Night wants to cram as many elements as possible and ends up becoming a squeamish mess. It is as if it burdens itself with these ideas into a whirlpool of genre tropes and then admonishes them away in its own accord. The jump scares do not work for most parts, and the revelations are not enough to save the day from the characters that lack depth and nuance. Even at 90 minutes, it feels 15 minutes too long.

Even with a clunky character, Cooper shines through as Shawna, with her natural screen presence automatically lifting the threadbare theatrics that surrounds her. The supporting actors have little to no impact on the narrative even within the dynamic of different personalities grouped together, except Keith David as the villainous vampire leader with a past who finely handles the preachy dialogues towards the end. Still, Cooper and David cannot salvage the second installment of Welcome to the Blumhouse, after Bingo Hell, from being a big disappointment that does nothing for horror nor vampires, lacking any amount of thrill and insight.

BLACK AS NIGHT IS NOW STREAMING ON PRIME VIDEO