The best fantasy and sci-fi films are intriguing due to the way it can wholly envelop us in its fabricated world and at the same time, it calls to attention the technological wizardry employed to achieve such visual marvels. In fact, seeking answers for how on-screen illusions are created increases our ability to appreciate and incur pleasure in the spectacle. Raoul Walsh’s The Thief of Bagdad (1924) was one of the most renowned early fantasy films, known for its groundbreaking production design, painterly images, and dazzling special effects. Although it’s a Hollywood fantasy that abides by the rules of the genre and is full of oriental clichés, the majestic storybook environment and physically exuberant performance of its very agile star Douglas Fairbanks still possesses the power to win our affections.

The Thief of Bagdad is credited as the first feature-length adaptation of the Arabian Nights tale, even though it’s not faithful in its tone and borrows a lot from orientalist popular romances and swashbuckling adventures. The film was clearly conceived as a star vehicle for Douglas Fairbanks who wrote the script and also produced through his United Artists Production Company, formed in partnership with his wife & star Mary Pickford, Charles Chaplin, and D.W. Griffith. The Thief of Bagdad might have been shot just over thirty-five days, but it took quite some time to build the massive sets (on six acres of land on North Formosa Street in Los Angeles). Young William Cameron Menzies, who is attributed to have pioneered the art of production design in Hollywood, created the storyboard and offered a clear impression of how Fairbanks’ complex cinematic ideas can be visualized. 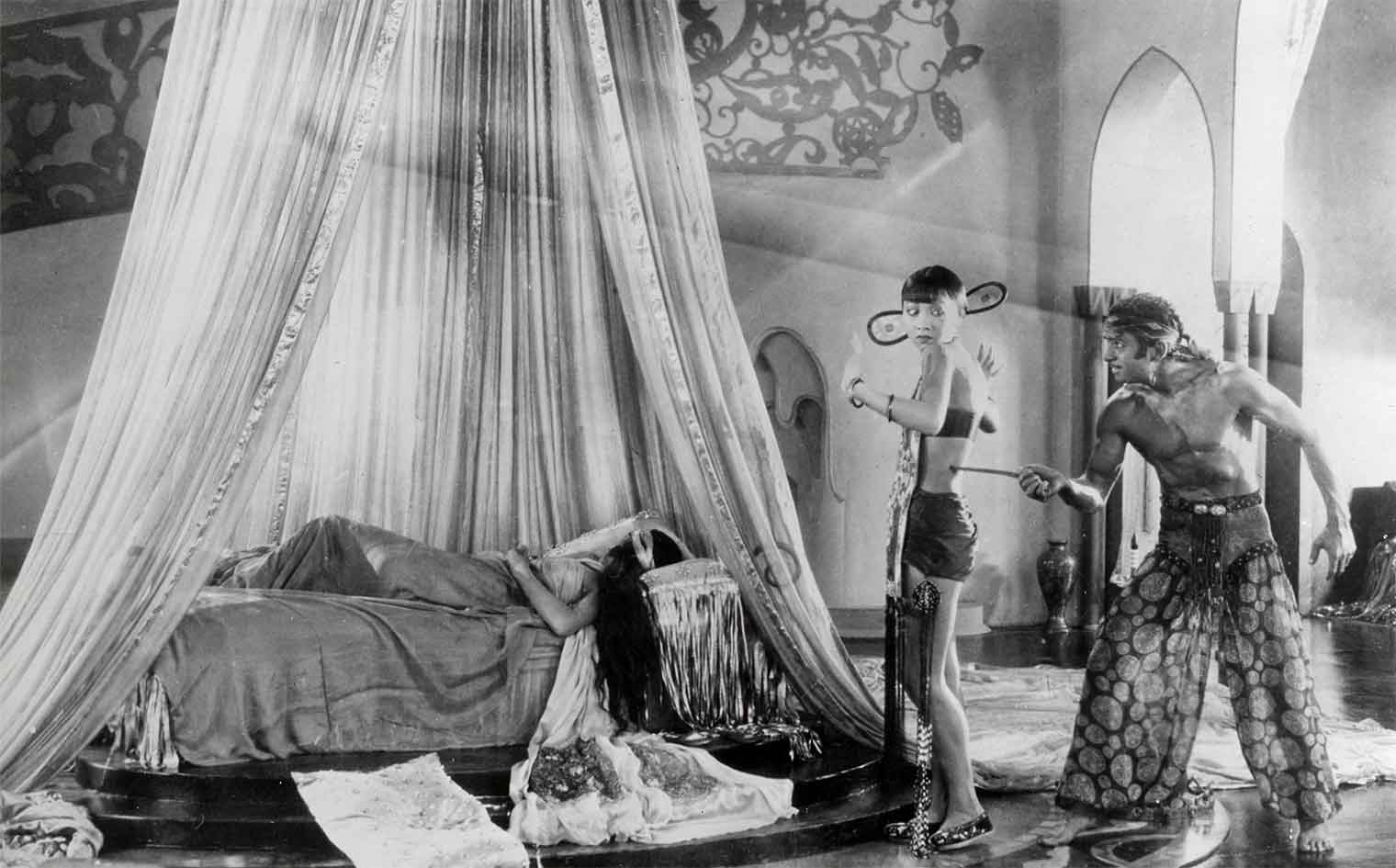 Director Raoul Walsh’s phenomenal success in sound cinema (High Sierra, White Heat) certainly dwarfs his achievements in silent cinema. Walsh’s five-decade directorial career started with working as a second unit director on The Life of General Villa (1914). In 1915, he served as assistant director for D.W. Griffith on his racist epic The Birth of a Nation; he also played a notorious role in the movie as John Wilkes Booth, the man who assassinated Abraham Lincoln. In the same year, Mr. Walsh made his first feature, The Regeneration (1915). Raoul Walsh was the last to join the production of The Thief of Bagdad. In his biography, it is mentioned that Walsh was initially unsure of taking the project but a walk through William Cameron Menzies’ sets convinced him [1].

Related to The Thief of Bagdad : Safety Last! [1923] – An Incredibly Exciting Slapstick Spectacle

Watching the movie now, it is clear that the strong foundation laid by Walsh and Menzies sets the stage for Fairbanks’ delightful performance and to realize all the typical Arabian fairytale elements: flying carpet, magic rope, winged horses, etc. Thief of Bagdad was of course not the first feature to make such grand sets. The gigantic, jaw-dropping sets for the Italian historical spectacle, Cabiria (1914), and the depiction of Babylon in Intolerance (1916) have already become the foundational-text for imaginative production design. But what makes Thief of Bagdad a path-breaking fantasy flick is the striking camera movements and in-depth staging which provides the feeling of walking through the fairy-tale world rather than just passively gazing at the majestic sets. It’s fascinating to witness the various locales – bewitching architectural forms – the film’s opening scenes take us to while also chronicling the happy-go-lucky protagonist Ahmed’s mischievous thievery.

The Senses of Cinema article details how Fairbanks’ acrobatic performance in the first reel thrives due to mesmerizing spatial construction and because of Walsh’s dynamic shots that ‘ensure we continuously share Ahmed’s point-of-view and his exhilaration…’ [2]. Through Ahmed’s allegedly anti-social pranks, Walsh establishes a lot about the character and the space he inhabits. Though it’s a fantastical version of ancient Bagdad, the strict social hierarchy is plainly evident. Ahmed innovatively scales a merchant’s house to steal cooked food kept on the balcony, he hops from one oversized pot to another with magical ease, but within the end of the first reel, Ahmed learns there are heights he can’t scale, maybe he can physically but not socially. It’s intriguing to see where he goes to sleep: his abode is a small cave at the bottom of a well.

What follows is an archetypal romance/adventure tale that involves a princess (Julanne Johnston) who sexually and spiritually awakens our man-child hero. Gazing at the beauty of the princess after sneaking into the Caliph’s palace, Ahmed loses his desire to live as a thieving drifter. To obtain the woman of his desires, Ahmed orchestrates a plot with his associate (Snitz Edwards) to sneak into the princess’ birthday party, dressed as a prince.  The princess is in the midst of selecting a suitor and prophecy points out that Ahmed is a perfect choice. Naturally, you need a villain to escalate the conflict and that’s fulfilled by a power-hungry Mongol Prince (Sojin Kamiyama) whose plans are aided by a spy (the memorable Anna May Wong) placed among the princess’ slave girls. Magic, monsters, treasures, swordfights, and crafty political games envelope the sensationalistic and fatalistic second-half.

Thief of Bagdad opens with an elderly holy man preaching to a boy, “Happiness must be earned”. Fairbanks, Walsh, and Menzies through their sheer artistry exactingly earned the audience’s ‘happiness’. Sure, Thief of Bagdad is a typical Hollywood spectacle that dabbles with racist stereotyping, which still remains as an issue to be addressed in the 21st century Hollywood cinema. The racial attitudes and excessive exoticism found here is the result of ignorance and laziness, not wickedness. In fact, keeping all that in mind the film can be enjoyed for its visually captivating presentation. Fairbanks’ penchant for using props to showcase his physical prowess, Walsh’s appealing point-of-view camera movements, Menzies’ extraordinary set design wondrously comes together to present a high-fantasy without a single dull moment.

Though Fairbanks charms us through his sheer physicality and an ear-to-ear grin, the star was 40-years-old during filming. It was said that Fairbanks was so fixated in keeping shape for the part – to look lean and muscular. Film historians have perpetually debated on Walsh’s true contribution to Thief of Bagdad which was so controlled by Fairbanks. In Walsh’s biography, however, it was duly mentioned that the director ‘brought a straightforward, problem-solving sensibility….the exact kind of no-nonsense movement, measured action, and pace’.

Spectacles like Thief of Bagdad were made during the time when the Hollywood machine fervently put itself at the forefront of commercializing cinema. Filmmaker and critic Mark Cousins mention that movies like Robin Hood (1922), The Ten Commandments (1923), The Thief of Bagdad, and Ben Hur (1925) “attempted to be spatially and psychologically clear and were made to engage audiences emotionally and be more romantic than real life… theirs is a phenomenally successful brand of emotional excess, against which other branches of world cinema would be defined” [3]. Nevertheless, the formidable work that has gone into realizing the sensory pleasures retains a sense of wonder than any of the later average CGI-heavy modern spectacles.

Thief of Bagdad was made into a sound/color film in 1940 with more extravagant special effects. Menzies once again worked as the production designer although narrative-wise there were lots of changes. For instance, the thief/Prince Ahmed character was split into two characters: the thief was played by the then 15-year-old Sabu Dastagir who starred in several classic films in the 1940s. More fascinating was the casting of Conrad Veidt as the villain (The Cabinet of Dr. Caligari). Both the versions are beautiful and distinct in its own way, exuding a sense of light-hearted escapism and an artfully conceived child-like vision of the world.

Ema (2019) MUBI Review - A Powerful Portrait of an Underestimated Generation

Clay’s Redemption [2020] Review: A messy, repetitive Midnight movie that fizzles out even before it kicks off!