The image of Harold Lloyd precariously hanging from the hands of a skyscraper’s clock in Safety Last! (1923) is one of the most famous and breathtaking moments in movie history; an image that has effectively blended thrills and comedy while also remaining as the very symbol of filmmaking itself. Born April 20, 1893, in Nebraska, Harold Clayton Lloyd made his screen debut as an extra at the age of nineteen (The Old Monk’s Tale, 1912). Between 1915 and 1921, Harold Lloyd had been part of over two-hundred short films although in the earlier years of acting he hasn’t zeroed-in on a unique and rich comic persona similar to Charlie Chaplin’s Tramp. In 1917, producer and director Hal Roach made the comedy-short Lonesome Luke, Lawyer featuring Harold Lloyd (Mr. Roach is best known for his productions of Laurel & Hardy comedies in the 1920 & the 30s).

In his autobiography, Harold Lloyd mentions that the idea behind Lonesome Luke was to ‘reverse the Chaplin outfit’. “All his clothes were too large, mine all too small. My shoes were funny, but different; my mustache funny, but different”, writes Mr. Lloyd [1]. Over the years, Lonesome Luke gradually evolved into ‘The Glasses’ character – “an athletic, ballsy dreamer, both aggressive and lyrical; a mixture of a jock and a nerd” [2]. Mr. Roach deserves a special mention in allowing Lloyd to experiment with his screen-persona, who also played a significant role in strengthening the plot elements of Lloyd’s slapstick vehicles. Similarly although Harold Lloyd didn’t take writing or directing credit (for all of his silent comedies), the man was the driving force behind each projects, from figuring out the camera angles to crafting the elaborate set-pieces. 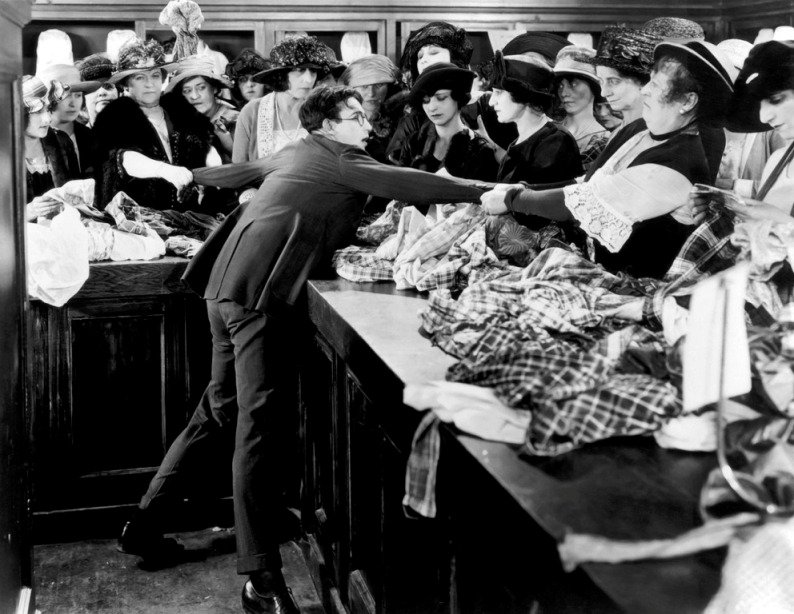 Chaplin’s Tramp and Keaton’s Great Stone Face were outsiders of different types. Harold Lloyd’s round bespectacled protagonist is even though portrayed as a naïve, young outsider hailing from countryside to the teeming city in search of success, the character strives to transcend his ‘outsider’ status and fit in. Particularly, Grandma’s Boy (1922) and The Freshman (1925) emphasizes on the young man’s struggles to be socially accepted. As for Lloyd’s comedic elements, he excelled in blending genteel humor with the uniquely modified slap-stick material. Of course, for years Lloyd was confined to a place after Chaplin and Keaton (even though, Lloyd’s 1920s features did better at the box-office than Chaplin’s and Keaton’s). But now we can see that all the three masters of silent comedy were simply great for different reasons.

Directed by Fred C. Newmeyer and Sam Taylor, Safety Last! has a very conventional story-line where it opens with Harold Lloyd’s character (billed as ‘The Boy’) leaves his family and beloved girlfriend Mildred (Mildred Davis – she got married to Lloyd just before the film’s release). There’s a nicely imagined visual gag in the opening reel of Safety Last which hints that The Boy might be heading to the gallows. Instead, we see him taking the train from rural California to Los Angeles. The Boy promises to send for Mildred and get married once he makes it big in the city.  But fortune eludes him as both he and his pal Bill (Bill Strother) are struggling to make ends meet. Yet Harold is spending every dime he earns working as a salesclerk in a department store on trinkets for Mildred.

“She’s just got to believe I’m successful…until I am”, Harold says to himself and keeps sending misleading letters that pronounces his magisterial status as the department store manager. Harold humorously depicts the chaotic workspace where the shoppers in demanding his attention literally tear off his overcoat. Moreover, the unctuous mid-level floor-manager, Stubbs (Westcott Clarke) constantly undermines Harold and complaints to the manager. One of Harold’s attempts to joke around with his friend Bill backfires, resulting in a chase between Bill and an angry policeman (Noah Young). In his effort to evade the policeman, Bill casually climbs a multi-storey, making the gathered spectators applaud his physical strength and flexibility. Meanwhile, Mildred unexpectedly shows up at the department store. Harold smartly overcomes the troubling scenario, keeping up the façade in front of his girl.

Later, when Harold overhears the store manager’s plans to award bonus ($1000) to the employee who can draw crowds to their store, he assures the management that he can stage the perfect publicity stunt. Next day, Harold brings Bill to his ‘Human Fly’ act and announces in the paper about a “Mystery Man’ who will climb the twelve-storey department store building. The infuriated policeman alerted by the news plants himself right in front of the building. Anxious Bill asks Harold to just climb one floor and then he can take his place at the first-floor window. However, Bill finds it hard to ditch the cop as he keeps asking Harold to just climb one more floor. Harold’s literal and metaphorical ascent towards the ‘American Dream’ is filled with series of obstacles (pigeons, tennis net, a clock, a mouse, and a wind gauge) that equally promotes laughs and thrills.

We now know that the shots showing Harold Lloyd dangling from the building were staged with sets, i.e., a dummy structure was constructed on the edge of the building’s rooftop, a platform with mattresses were placed down while the camera position perfectly capturing the street-scene below (providing the essential illusion of height and physical danger). Furthermore, the long shots of the climb were done by a professional stuntman. Yet it is important to note that neither the fake building frontage nor the platform provided him the perfect safety net (it was still risky and a fall could have been nearly fatal). Eventually, the meticulous editing process in Safety Last also plays a key role in staging the comic obstacles that thwart Harold’s climb. 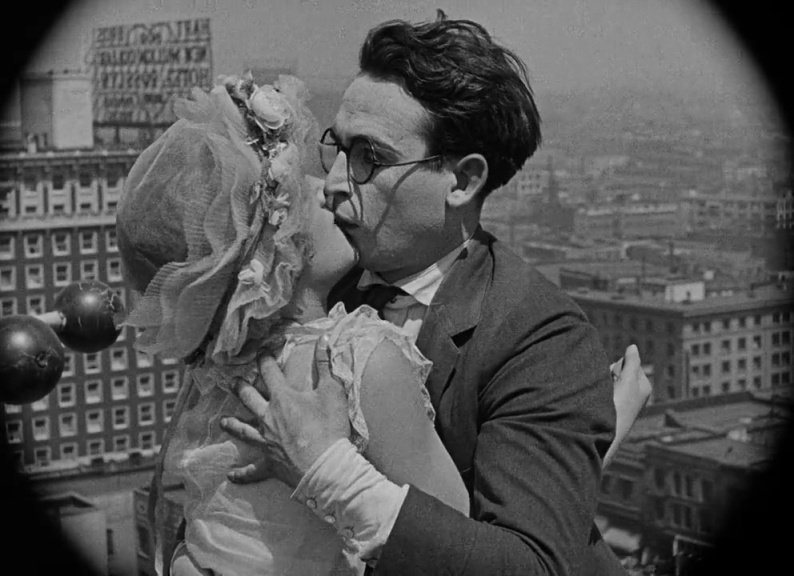 “Having seen a high-resolution 35mm print in which I am clearly looking at Harold Lloyd much of the time, I am prepared to believe that certain shots may have been doubled, but that in others the star himself was in mortal danger, “ writes film-critic Roger Ebert [3]. Harold Lloyd’s efforts are all the more fascinating considering that he lost the thumb and forefinger in his right hand after an accident in the late 1910s. My favorite moment in the entire climbing sequence of Safety Last is when Harold is hit by a weather gage. Dizzy from the blow, he staggers on the ledge of the building, his foot caught in the rope of a flag pole. Then he swings upside-down through the air like a pendulum, and when Harold swings up on the rope he falls in to the waiting arms of his sweetheart, the danger instantly averted by the embrace.

Also, Read: The Kid [1921] Review – The Most Poignant of Chaplin’s Silent Masterpieces

Of course, the climbing sequence is more than an exercise in physical humor as it possesses dramatic weight and moreover symbolically represents the unlucky young man’s desperation for upward mobility.  In the book Screen Ages, it is observed that Lloyd’s comedies ‘reflect the power of American Dream in the hypercompetitive market of 1920s America’ [4]. Even though the proceedings are light-hearted, Lloyd eventually seems to be expressing the general fear that how hard work won’t matter to achieve the dream, but rather luck and chance.

From Yasujiro Ozu to Jackie Chan (he paid homage to the silent artist in his 1983 film ‘Project A’), the enduring influence of Harold Lloyd is pretty evident. Although, Mr. Ozu hasn’t mentioned Lloyd, film theorist and historian David Bordwell argues that Ozu’s earlier silent comedies (in the late 1920s) used prop jokes just as Lloyd did in his works [5]. Like his contemporaries of that era – Keaton and Chaplin – Harold Lloyd’s genius lies in the way he kept experimenting with the medium without losing focus on the funnier (and equally poignant) central character. Safety Last! (74 minutes) is the best of his thrill comedies, actualizing a series of precisely-timed gags in an atmosphere of chaos and discomfort.

25 Feel-Good Movies and where to Watch them