Race: Bubba Wallace on Netflix was timely as it premiered just hours after NASCAR 2022 began at Daytona. Right at the start of another NASCAR (National Association for Stock Car Auto Racing) campaign, it served as a kind of recap that came to capture fans and perhaps ensure more fans step onto the bandwagon at the right time.

Sport is a goal that many cherish, but only a few achieve. The athletes reach their aim through raw talent, perseverance, and single-minded focus. However, sports persons occupy a privileged position and are expected to take a stand, usually one that will get vilified at the altar of public opinion. They get criticized no matter what they do. While the in-game criticism may be valid, what if things away from the sport play a role in upsetting an athlete’s single-minded focus? What if that athlete is a NASCAR driver? That’s what Race: Bubba Wallace is all about.

It focuses on the man who broke barriers in the sport, the one who draws in comparisons and scrutiny unlike any other, as he is THE ONE. Although he was the second racer of colour to clinch a Cup Series win, he was the first to get a trophy. The reason- a reminder of society not so long ago when the first non-white claimed a win.

Darrell Wallace Jr aka Bubba Wallace is only one of four drivers of colour to pilot a NASCAR vehicle full-time (currently 23XI Racing owned by Michael Jordan and Denny Hamlin).

That historical fact doesn’t perturb him, as he has always seen himself as someone who needs to drive to win and earn a living. Wallace raced for almost 7 years, but never took a stand against anything, even the confederate flag. 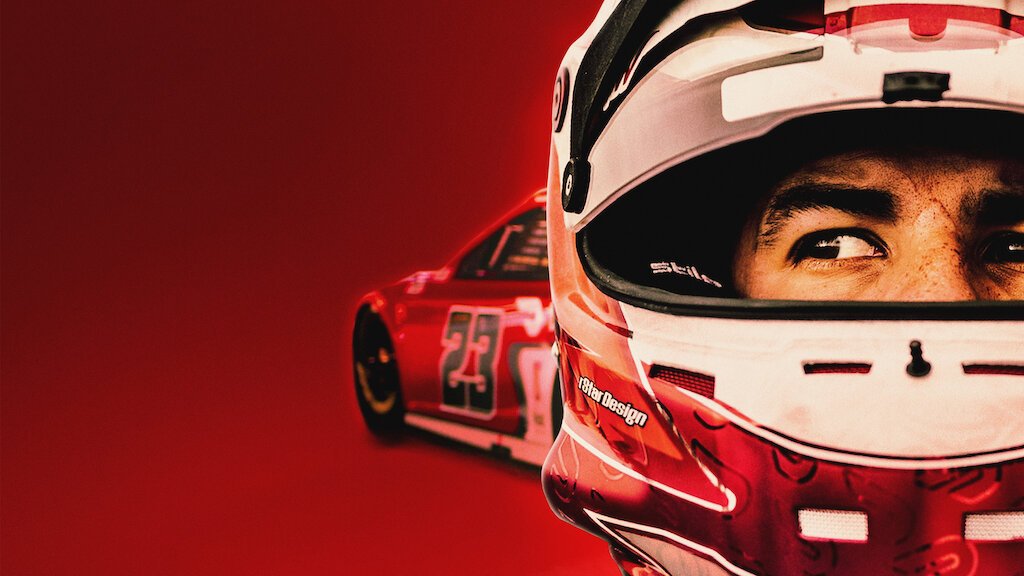 The first episode (A Fresh Start) focuses on this widely covered topic and shows Wallace’s motivations behind his actions. The fusion of the incident, coupled with real footage, and the interviews and flashbacks, touched on the emotions and the rage that prompted the NASCAR driver to speak out. Why?

We get an insight into his family, his time as a black driver in a white-dominant sport from the traditional deep south. He may haven’t had used his positional privilege, but we get to understand that as well. It’s a sport first, but sometimes…

Race: Bubba Wallace throws light on how no matter what, prejudices exist. They are there, but to juggle that, to balance the reactions, professional expectations, and compete at the highest level takes immense strength. Don’t they just drive a car in circles?

Director Erik Parker aims to push NASCAR as a highly technical sport and I came away with the notion that some fans were right in theory (about driving in circles), but that was just half knowledge. Each lap requires technique, finesse, and precision while flat out at over 140 miles per hour. To think as you drive. It is indeed a mental chess match at insane speeds. One wrong drift, touch, or wheel error is all it takes. And it may not even be your error that could end your dreams on the speedway. The glimpses of horrific multi-car crash combined with the explanation enhance the mindset of the drivers.

Also, Read – Neymar: The Perfect Chaos [2022] ‘Netflix’ Review: It Will Come Across As The Perfect Disappointment

Travelling in a car with no doors (NASCAR drivers enter their vehicles through the windows), spending 4 hours at 140 degrees Fahrenheit, gauging the conditions, the lines, they have their mind on a lot of things with massive financial and career implications. Imagine having to be an ambassador for change at that time and facing an onslaught of hate? Symbols exist, tweets exist, and the knowledge of Colin Kaepernick exists.

It is a pressure that adds much more, and one that athletes can do without. Especially this athlete. There were athletes of colour who broke barriers in their sport, but in today’s social media age, the efforts are just laudable.

Aside from the flags and reactions, there is enough to satiate the desires of the casual sports fan who isn’t interested in the technical details of a race. We get glimpses of the Daytona Speedway, Bristol, Talladega, Circuit of The Americas, Pocono, Martinsville, and more.

The series takes the audience right down to the centre of the action as viewers can see the pit crew, the factories, the voice in each driver’s ear. They get a view of a chassis flying into their windscreens just as they come out of the glare of the sun. It enhanced the ambition about why focus on the track is so key and why drivers should not be clouded and asked to be agents for change. While it is good, the effects of basic human emotions can cause one to lose focus. Losing it at 140+ miles an hour with multiple vehicles also going at that speed…

One can even compare NASCAR to F1, and see the community aspect present in one and lacking in the other. Audiences may understand why the Coulthard-Schumacher incident was so shocking in one sport, but a similar one at the Speedway is a regular occurrence.

The classic sports film mantra of raw talent needing to be honed is seen with the real-life nature of it not being an overnight success. This helps position Race: Bubba Wallace as a documentary rather than a fictional story based on true events.

We get to see Michael Jordan‘s competitive spirit that NBA fans knew of from his time with the Chicago Bulls. That aspect wasn’t glossed over in Race: Bubba Wallace as we got to see race review meetings of not-so-good races. There is criticism, but it isn’t brushed aside. Despite there being reasons, it was quite refreshing to see Wallace take it on him and acknowledge it.

Parker’s documentary offering dispels the notion of the athlete being someone who works a handful of dates a year. They work every day, study regularly, and perform only on a few days. However, to perform, wouldn’t it be useful if they could just focus on the target and not be lost amidst the kaleidoscope?

Race: Bubba Wallace has provided a microscopic view into the kaleidoscope that is the life of a sports person. They need to balance so much more, be so much more, and always be right. Do they sign away the right to be humans when they ink a deal to be racers and fulfil their childhood passion? It has enough to provide a message, enough to enthral sports fans, and a dash of what’s needed to hook the NASCAR purists. They may be able to ignore the fact that certain lines are repeated in multiple episodes, and perhaps, the makers could have wrapped it up in five? Hell, if it was five episodes, we may have wanted four.