Woodlands Dark and Days Bewitched: A History of Folk Horror [2021], which is available on Shudder BTW, is a genre-defining documentary. As in it literally defines what folk horror means, how it started, and how it’s evolving. Out of the thousand points that it makes, here are the most relevant ones: folk horror stories gain popularity when there’s a certain level of uncertainty about the present. The knee-jerk reaction to it is to regress because we’ve been programmed to perceive the past as the “simpler” times. That usually leads to a violent conflict between two generations with widely different sets of principles, one trying to upset the other in order to establish the status quo or build a new one. And that’s essentially what Hellbender is all about.

Written and directed by John Adams, Zelda Adams, and Toby Poser, Hellbender starts off with a woman, mouth half-sewn shut, standing atop a bloody pile of bodies. That’s succeeded by the hanging of that woman by a group of women. The woman initially dies but then begins to struggle. She’s shot in the head multiple times but to no effect. When one of the women tries to stab her, she gets pulled up into the sky while burning very literally. Then we cut to the present day where the mother-daughter duo of Izzy (Zelda Adams) and her mother (Toby Poser) are living in a remote bungalow in the woods. Well, they actually own a part of the woods with a “beware” sign at the entrance, which is a few miles away from the house. They eat figs and berries. Izzy is home-schooled. And the first time she encounters another human being that’s not her mom, we learn that she is under the impression that she has some immunodeficiency disease and hence can’t meet people. But that’s obviously not the truth.

Related to Hellbender: 10 Great Horror Movies of the 1980s

Without giving away too much, as evident from the first scene, Izzy and her mother actually belong to a long line of witches. Not just any kind of witches though. Vampiric ones! Because they draw their power from the energy residing in living beings and of course said energy can be extracted by devouring said living being’s blood. It’s an interesting revamping of the established lore around both witches and vampires as it gives a more elemental vibe to these beings, instead of just saying they’re “magic”. It also gives the whole setting more meaning as it serves as both a prison and an endless supply of energy. However, as shown by the mother, there’s a middle ground that exists on which beings like them won’t have to starve for power or go overboard and cause too much carnage. And that can be achieved by choosing to be a part of the cycle of life and death and derive pleasure from the items that are born out of it. They have that choice. But that’s the thing about choice. People rarely choose the right option. 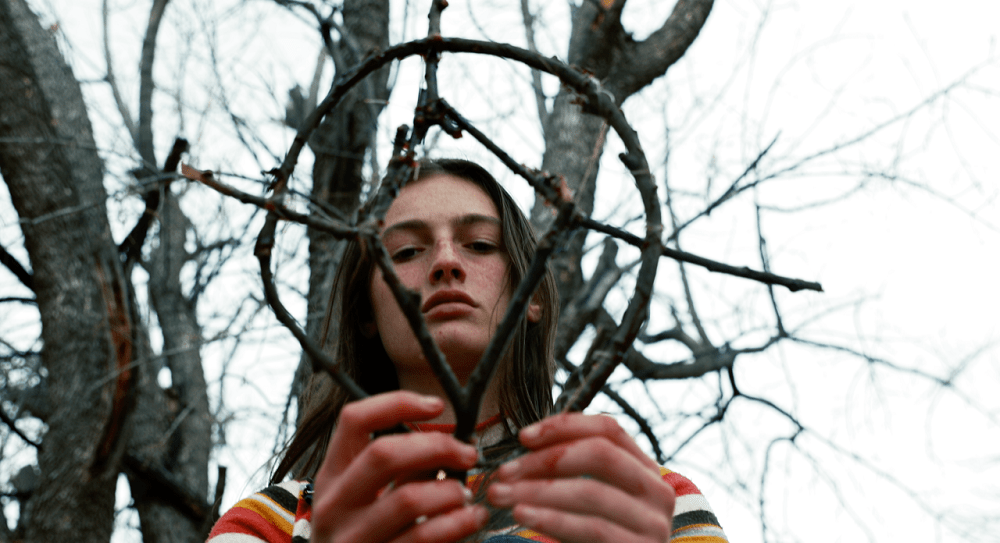 The dilemma to choose the right option is what forms the crux of Hellbender’s story and the conflict between Izzy and her mother. Izzy, who isn’t aware of the trauma that comes with being a vampiric witch and has just been exposed to the power of being a witch and a regular teenager, wants to expand her borders. Izzy’s mother, who possesses immense knowledge on what it means to be a vampiric witch while living in this mortal realm, wants to keep the walls up, metaphorically and literally. The writing expresses all these themes pretty effectively but sometimes struggles to be both poetic and organic. The visual storytelling is much more visceral and profound. The garish display of practical effects, costume design, production design, and VFX is eye-popping. Yes, there are moments where it feels a little amateurish, especially during the musical scenes and when it implements dust and fire effects to the magical segments. But when it sticks to only doing things that can be achieved on-camera and then slightly improved in the post, to put it simply, Hellbender rules.

The acting department largely hinges on Zelda and Toby’s shoulders because they have the most amount of screen-time because they’re integral to the story and they’re great! The sense of dependence that their characters have on each other is palpable. When the paradigm shift happens, the subtle changes in Zelda and Toby’s vocal inflexions, the way they look at each other, and the way they treat the camera and vice versa are beautifully noticeable. If this movie would’ve had nobody else but them and featured a few more characters in the flashback montages, it would’ve worked as well. But alas, there are some characters in here who aren’t written confidently. That’s why the performances come off as tacky. There’s this scene where Izzy meets her “neighbour” Amber (Lulu Adams) and her friends for a pool party. And that is the scene that will make or break the movie for you because it’s tonally all over the place and painfully awkward. That’s not an attempt to belittle the actors though. The criticism is targeted towards the writing and direction.

In conclusion, Hellbender is a solid horror movie. Its surface is covered with a thick layer of blood, bones, sticks, stones, ash, and every other gnarly thing that comes to your mind. But underneath is a family drama about overcoming generational trauma and putting an end to Izzy’s mom’s very literal helicopter parenting. It’s an incredibly immersive viewing experience, largely due to the pacing. Personally speaking, when I thought I was 20 minutes into the movie, I was actually 49 minutes into it. Which is a huge compliment. Hellbender is definitely not for the faint of heart, especially its final few minutes, which can be described as a sensory overload (in a good way). So, if you can stomach some gore and nightmare-inducing visuals, do give it a watch.

Hellbender is now streaming on Shudder