The Wonder (2022) Movie Ending, Explained: Within a span of just half a decade, Florence Pugh has become one of the most reliable actors from the current generation. Be it her calmly devastating monologue from Little Women, the outrageously horrifying turn in Midsommar, or the unsettling portrayal of an obedient housewife from this year’s Don’t Worry Darling, she has already created an imposing body of work as an actor. With ‘The Wonder,’ she adds another pearl to this string, her understated performance filled with aching sensibilities.

This somber, devastating, and the profoundly stimulating film is now streaming on Netflix, and it is just as fascinating as the director Sebastián Lelio’s other character-driven dramas. Its screenplay is written by him, Emma Donoghue, and Alice Birch. 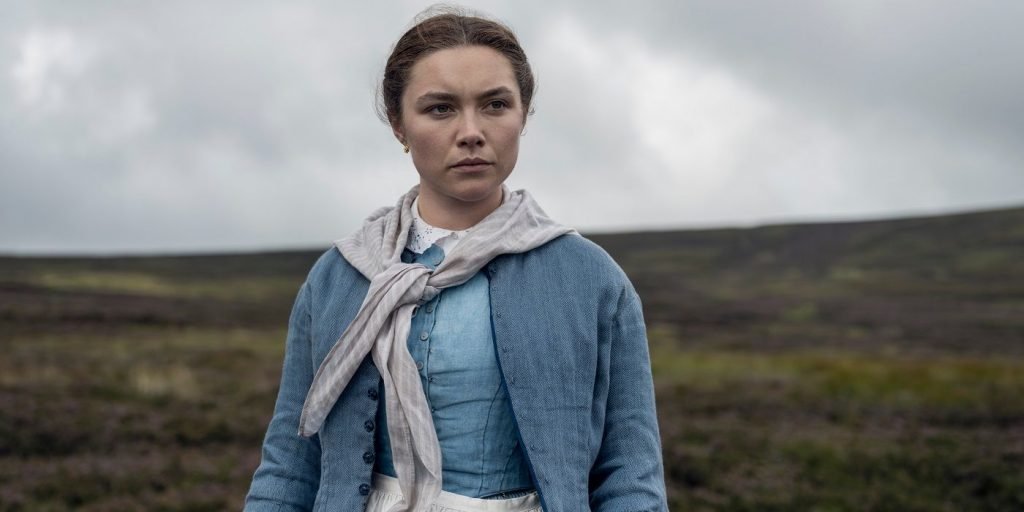 ‘The Wonder’ begins on a film set, where we are told about the significance of stories through voiceover narration. The camera sweeps across the area to show the period setting created within the set, where the narrative begins. It is from 1862, when an English nurse, Elizabeth Wright, aka Lib (Florence Pugh), goes to Ireland for a job. While resentment against the Brits over the Great Famine remains prevalent, the nurse travels from England to a remote Irish village to investigate a young girl’s supposedly miraculous fast.

Besides the nurse, a nun is also asked to join for this job in the girl’s family – which has been blessed with many daughters. Upon meeting a self-appointed, all-male committee meant to assign them their role, they learn what the family tells them about her. The girl named Anna O’Donnell (Kíla Lord Cassidy) has not eaten for four months, according to her family’s claims, and is all well and sound according to the committee’s understanding. She and Sister Michael (Josie Walker) are supposed to keep a watch on her in alternate shifts of 8 hours, observe all the minute details, and report back to them. They are also told not to share any information with each other, which, in their opinion, would jeopardize the purpose of their task.

Lib objects to the physicist Dr. McBrearty’s claim about Anna being well after such extended fasting. However, none of the members pay heed to her deduction and want her to be obedient to their expectations of her – which is of taking no action but only observing how the wonder of the long fasting girl occurred in the first place. She is escorted to the place of the profoundly religious O’Donnell family and kept waiting since Anna has many visitors out of curiosity about her. After the meeting, Lib starts noting the observations and conversing with her. Anna appears in good health and says she is alive after consuming ‘manna from Heaven.’

Anna initially believes that Lib is there to stop her from eating, owing to anyone else having this exact expectation from her. While she tries to uncover the truth behind the prolonged fasting, she opens up about her past of losing her daughter at a young age. She still holds the tiny socks of this child. After cutting her finger, she drinks her own drop of blood with a sense of calmness. While dealing with her traumas in a closeted manner, she works to learn more about Anna.

With references from the past, Anna reveals the importance of chastity and purity for these female figures. She senses the presence of her parental figures affecting her belief system and asks the physicist to give her time undisturbed by them. She gets her to wish fulfilled, but that leaves Anna’s mother – Maggie (Ruth Bradley), and her older sister – Kitty (Niamh Algar), displeased. By that time, Lib learns about Maggie’s late son through a picture. She also encounters William Byrne (Tom Burke), a local man who works as a journalist for the Daily Telegraph.

Later, during one of her shifts, Lib finds a lock of hair hidden inside one of the objects from Anna’s room. Upon speaking with the girl, she realizes it is her brother’s hair. While she struggles with her past, her search to discover the truth about Anna persists. Over the period, she senses Anna’s fast not being of her own accord but by the supervision of others, who keep telling her stories filled with religious fanaticism. She observes her deteriorating health and decides to take action.

Seeing her tooth fall down from a bloodied spit, Lib gets unsettled and sees it as a sign of an utter lack of understanding by others. She decides to feed by herself and goes on with an attempt to force food directly into her mouth. She stops it in no time, seeing it as a sign of misplaced anger. Will persisted in having a word with Anna to tell a different side of the story for his newspaper. By then, they had gotten intimate with one another, which probably gives him another motive to help Lib with her mission.

While walking with Lib and Will, Anna suddenly falls down on the ground. While Lib sees it as a clear sign of weakness out of hunger, her physicist denies the claim and shuts her up from giving a diagnosis for being a nurse. While speaking with Anna, she realizes that the girl is doing it because of a sense of service toward her brother’s untimely death, for which the parents had made her guilty for his death. With her patience gradually reaching its limits, she decides to take up to the committee the truth she had learned about the single thing that has kept her alive for months.

Her mother fed her pieces of food from her own mouth, bitten by her, like how birds do. Sister Michael denies the claim and stays faithful to the secrecy of such acts to prove her unwavering faith. Even Anna’s parents find it incredible, not the claim itself, but the fact that Lib decided to share it. Anna is made to believe it is a ‘manna from Heaven.’ As a result of these unscientific, patriarchal dramatics, Lib decides to rescue the young girl from the prison of her biological family.

What does ‘In-Out’ mean in The Wonder’s narrative?

After going to O’Donnell’s homestead, Lib speaks with Anna and makes her come up with the kind of story she believes in. She presents a hypothetical where a new little girl gets born with a new life once Anna dies. She brings Anna into building this story by asking her the name of this new girl. She answers as Nan. The principle applies here of how you choose to believe something that you are familiar with, and Lib uses a kind of story Anna would be familiar with (and thus, comfortable with) to make her come with her. She then takes this young girl to the outskirts and gives her a sense of a journey from Anna to Nan.

Lib returns to O’Donnell’s place and decides to burn it down, along with the memories of her past. The all-male committee later question her about the encounter, and she shares a lie about her effort at reviving Anna. Soon after, the investigation proved that no one was to blame for the untimely fire. While that saves Lib from any blame, the self-appointed committee also saves themselves from any blame for having kept Anna starving for such a long period and observing her as their subject of interest to build some new stories to back their belief system.

Afterward, Lib goes back to England and finds Nan along with Will. They enter Nan’s new world together as a Cheshire family. While at last, in the end, Anna has a piece of her food; we see Margaret in modern clothes repeating the phrase – ‘In – Out’ while looking straight into the camera.

This is in reference to the drawing Anna receives attached to a piece of thread. On one side, there is a cage, and on the other, there is a bird. While it was indicative of the incidental escape, it now represents an escape in a larger sense. In her new world, Anna will be confronted with more and more stories that will make them believe in themselves and resultantly limit her at times. Her journey of In & Out is of a metaphorical cage that is quite possibly eternal – since the world is in itself a cage filled with regressive beliefs. In the narrative sense, it is Lib and Anna’s story of transforming each other’s lives.

The film critiques the nature of servitude, purity, and sanctity expected from women. We notice right from the beginning that the daughters’ presence does not fulfill the son’s absence for the parents. However, through Margaret’s / Niamh Algar’s narration, we are reminded of the importance of shared stories. The stimulating nature of this silently devastating film reveals more the more we dig deeper into it.

Everything Related to Netflix’s The Wonder (2022):

6 Films To Watch If You Like The Wonder On Netflix

Where to watch The Wonder