The new Netflix Original ‘The Wonder,’ directed by Sebastián Lelio is an atmospheric and disturbing period drama set in the aftermath of The Great Famine in 1862 Irish Midlands. The story is about the miraculous, elongated fast of an 11-year-old-girl named Anna who has become quite the talk of the town. English nurse Lib Wright is brought in by the local community headed by men of power to observe and understand the reason behind the girl being able to live without food for more than four months. Haunted by the traumas of her own past, Lib discovers that the Wonder child and those around her form a more complex and troubling puzzle than she had initially anticipated.

Based on Emma Donoghue’s novel of the same name and co-written by Donoghue herself (along with Lelio, and Alice Birch), The Wonder prophesies the urgency of its subtext by reworking the narrative as a self-reflective storytelling debate. Pugh’s Lib is a counter to the patriarchal society and religious fatalism she has to face upon reaching the Midlands. Lelio’s gaze on the material doesn’t hinder the piercing power it holds in its mysterious narrative turns, and the more disturbing aspects are so well-tackled that the impact is future-enhanced over a prolonged afterthought.

If you happen to like The Wonder on Netflix, I have tried to find other movies that somehow feel like they are cut out of the same cloth. These movies either use similar themes and/or are mostly structured around a mystery that is uncovered piece by piece as a sinister, almost haunting smoke of grimness overtakes you. 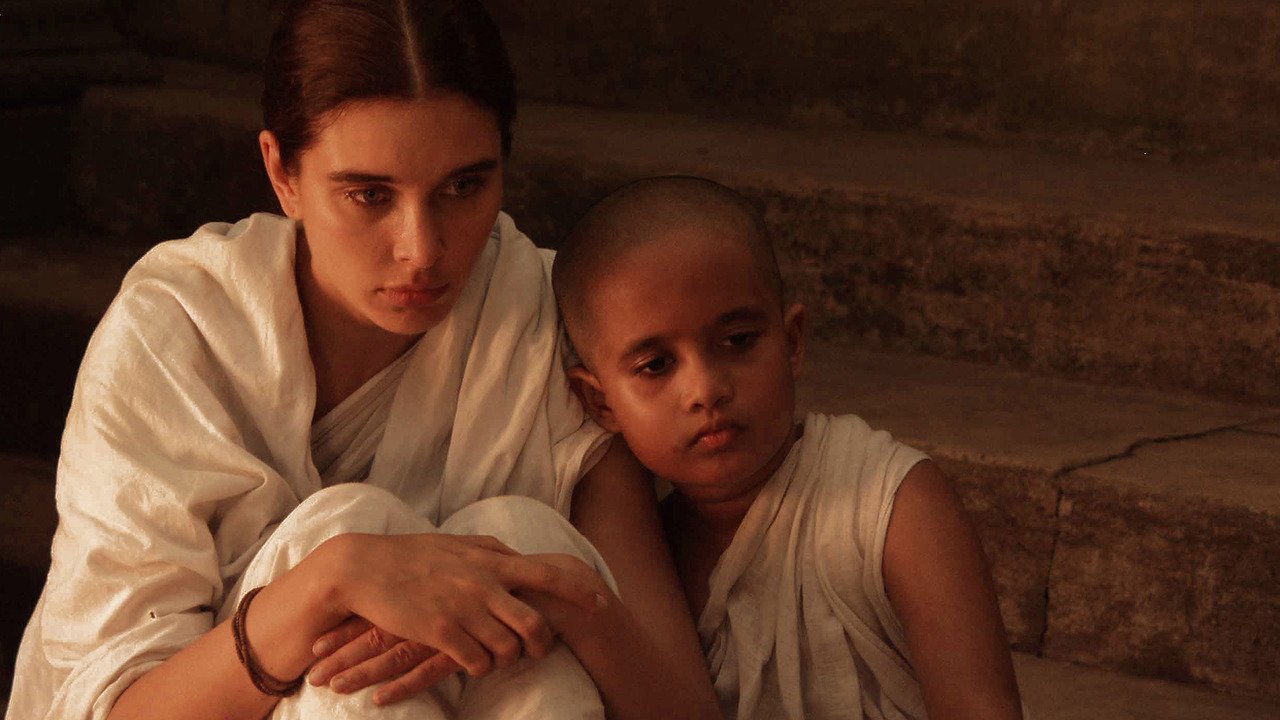 Deep Mehta’s 2005 film Water might only be remembered for its controversial history; the right-wing protest that led Mehta to shoot and complete the filming of her third film in The Element Trilogy in Sri Lanka, instead of Varanasi where the story is set. But no one can dismiss the powerful story that it tells. Set in the 1930s when India was still under British occupation and Child Marriage was such a common practice that it was not only normalized but blatantly followed across the country, the focus of the narrative is on an eight-year-old girl named Chuyia who after being widowed is left renunciate the rest of her life in an ashram.

Being punished for bad karma, Chuyia, along with the other women in the story are trapped in a cycle of both physical and mental abuse for a crime that they did not commit. Water, though incredibly melancholic in its representation of women in Indian society, feels like a cautionary tale about what happens when patriarchal rules are followed to the tee and when men are allowed to take control of the story that has nothing to do with them. 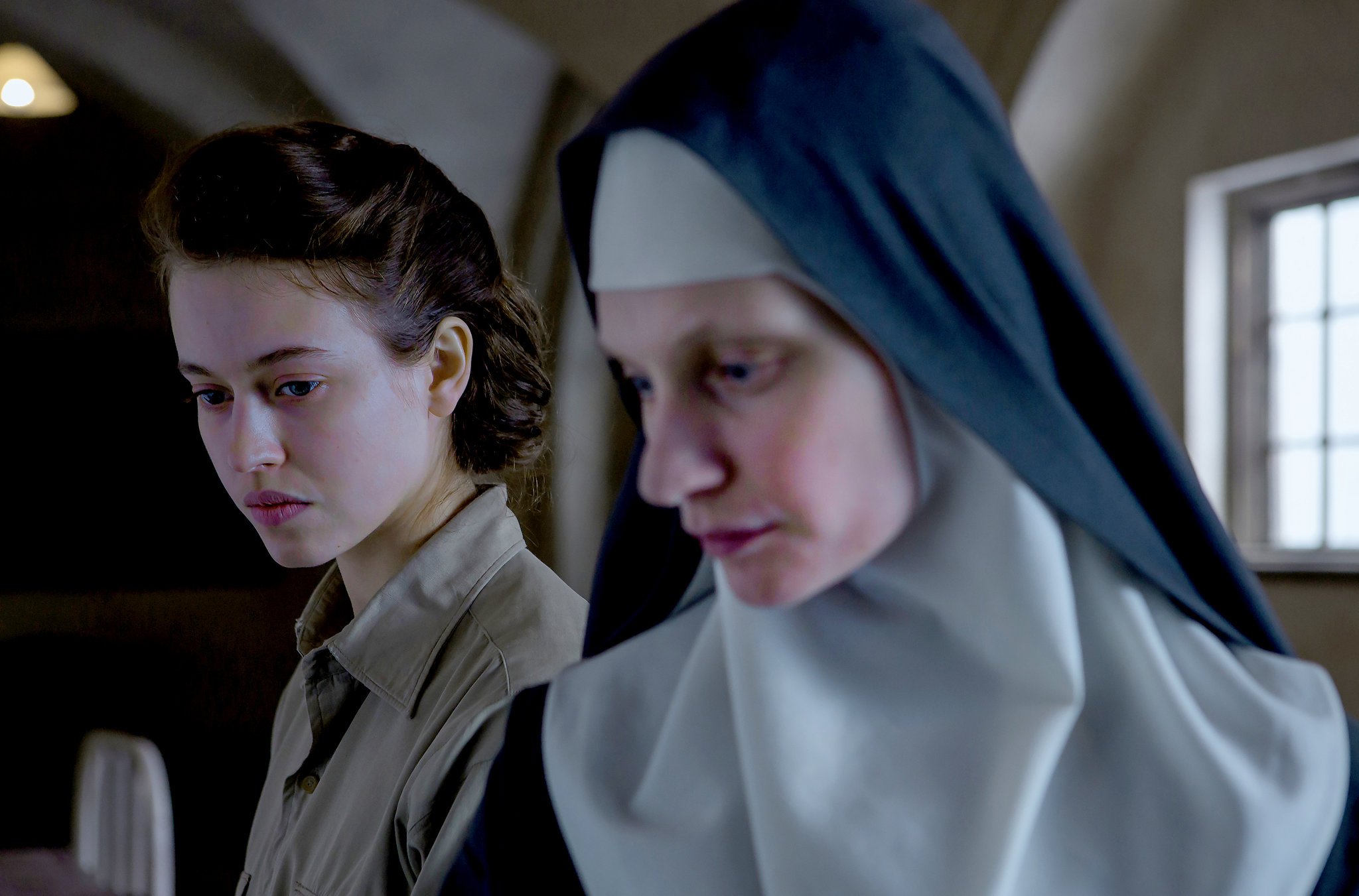 The 2016 French film ‘The Innocents is a devastating story that is not meant for the faint of hearts. The story is based on an original idea by Philippe Maynial (who bases the story on the experiences that his aunt) about a French Red Cross doctor during World War II, dealing with the aftermath of the mass rape of nuns at a convent in Poland. Lou de Laâge stars as Mathilde Beaulieu, who, during her time serving for the Army unit in Warsaw, is approached by a nun named Sister Teresa to look at several women in her convent who are either suffering from the repercussions of the rape by Russian soldiers or are slowly losing themselves to the decay of time as the trauma overtakes them.

Like The Wonder, The Innocents is a movie about women (mostly young) facing the wrath of an act of abuse by purely believing that their faith will sail them across to safer waters. The way director Anne Fontaine slowly shows the loss of faith in these religious women, while also showing their desperation and inability to do anything about their situations makes the film both emotionally exhausting and necessary viewing. 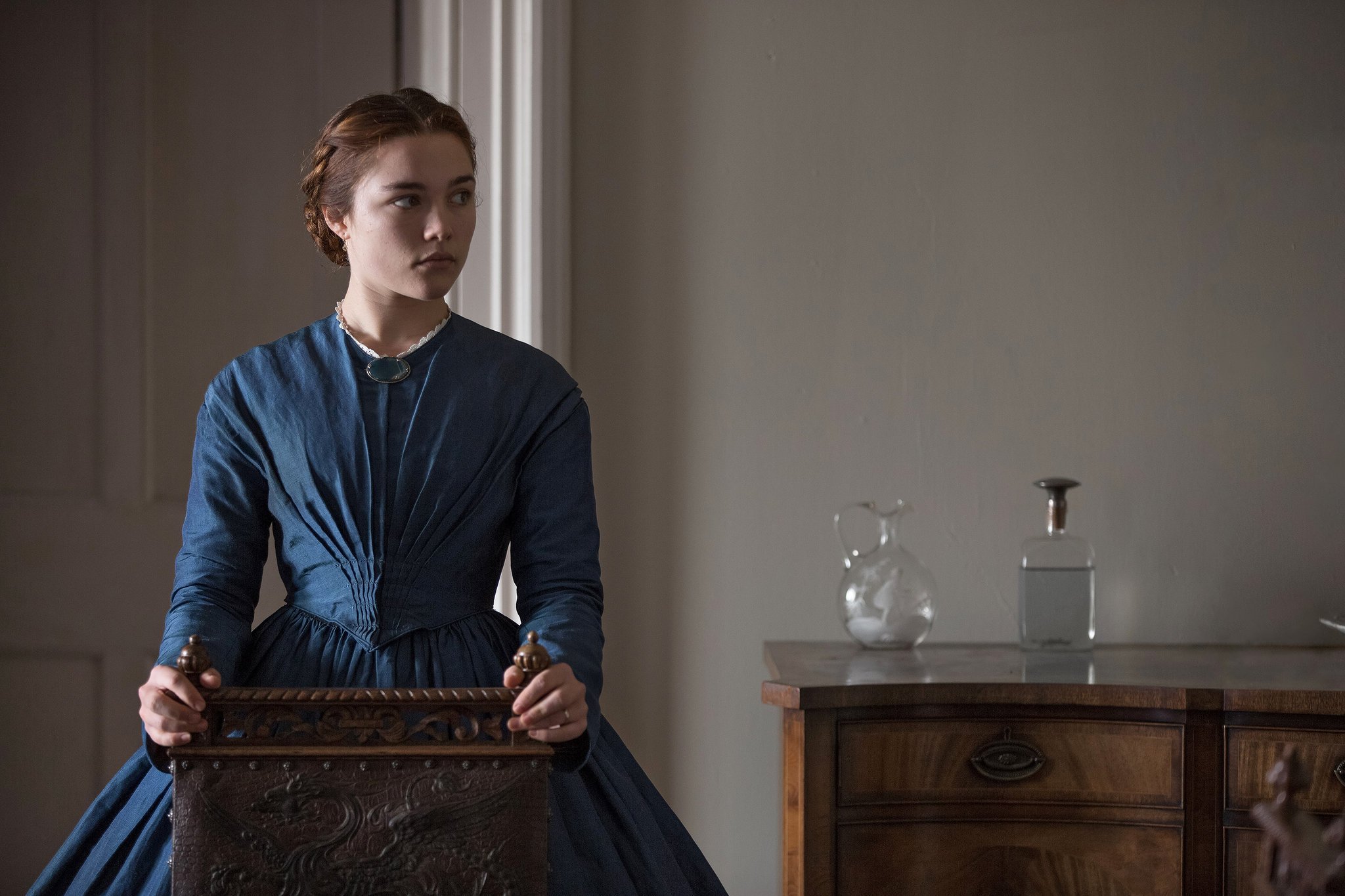 Now, this is a recommendation based on two main grounds. Like The Wonder, Lady Macbeth is also a period piece and it is only a plus that both of them star Florence Pugh. Thematically, the two films are poles apart if you really dig into them, but if you look away for a second, they are both about patriarchy and how women were oppressed from being true to themselves just because certain beliefs hindered them from doing what they had in the hidden echelons of their minds.

While Lady Macbeth’s grimmer undertakings are not driven by faith and a lack of power, both the movies feature an initially clueless Pugh trying her best to beseech what is, in fact, her right. The 2016 movie is a full-blown tale of vengeance and a fight for autonomy in a time when women had none. Pugh’s Katherine is purposefully evil in her schemes, but her performance makes each step of this tale intriguing and riveting. 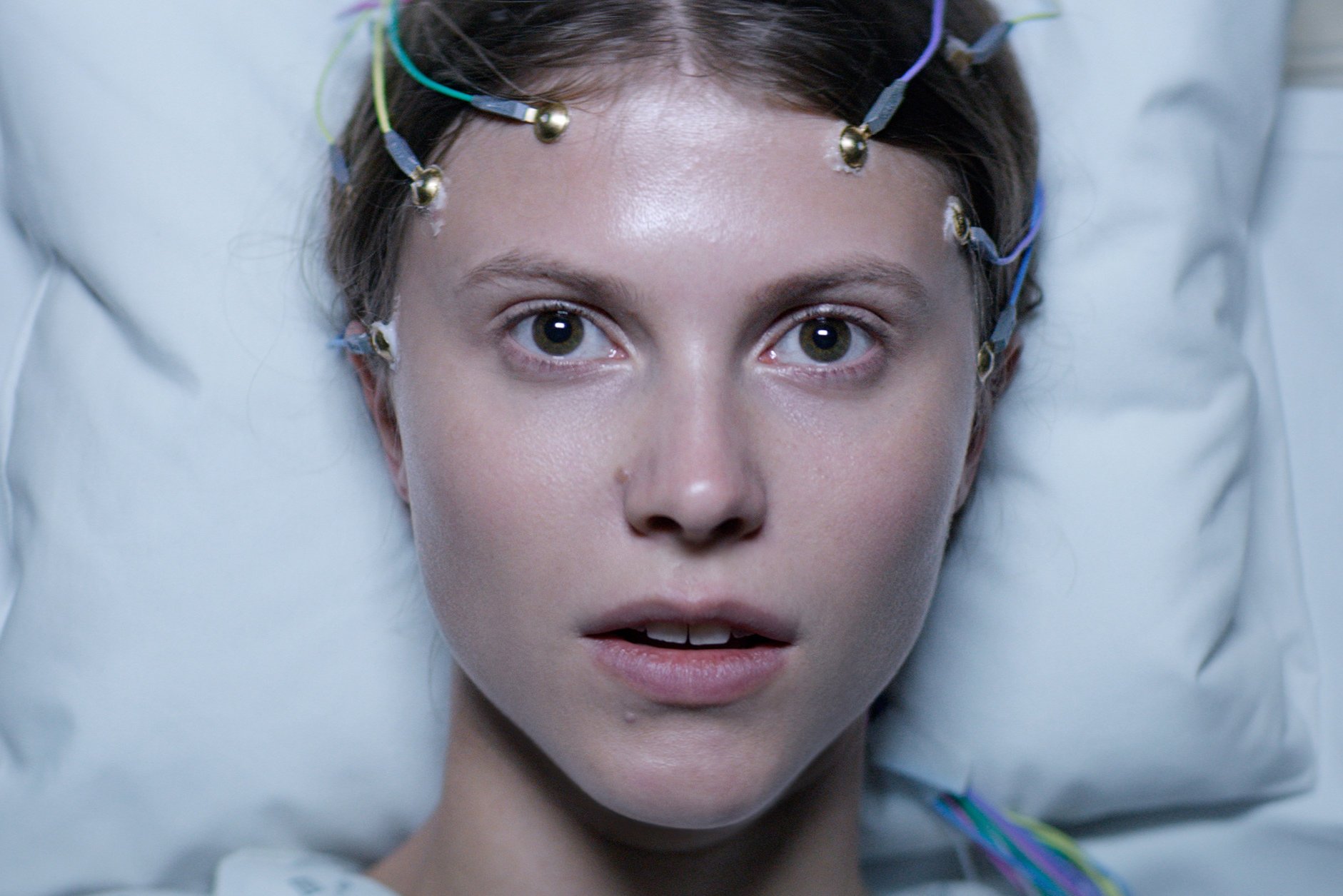 The closest any of the films on this list can get to Netflix’s The Wonder is the 2017 supernatural coming-of-age tale, Thelma. Written by Eskil Vogt and directed by Norwegian filmmaker Joachim Trier, this is a story about a girl named Thelma (Eili Harboe), a college student who starts experiencing extreme bouts of seizures during her tenure at a University in Oslo. While she befriends Anja (Kaya Wilkins) and indivertibly falls in love with her, the twisted nature of these seizures push her into a more complex puzzle that can only be pieced together if Thelma looks back into her life and truly understand what is holding her back.

While discussing the actual similarities between The Wonder and Thelma might involve ruining the experience of watching the latter for the first time, I’d just say that religious fatalism, self-harm, and descent into turmoil are only the edge of the curve. Thematically, both of these movies are about young women trapped in a repressed reality that their faith and societal pressures have put upon them. The next movie on the list is director Sebastián Lelio’s very own 2017 film Disobedience. A part of Lelio’s unofficial ‘trilogy of women,’ the movie follows New York-based photographer Ronit Krushka flying back to her Orthodox Jewish community in London upon the passing of her estranged father. While dealing with a sense of true loss that she can’t really understand and figure out, she is met with her childhood female friend Esti who she had an affair with, back in the day. As she learns more about her father, her passion for Esti is also reignited. But yet again, the conservative community that was the reason for her running away from her home, comes to question her for her actions.

Pretty much like The Wonder, Disobedience is about women being unable to realize and be who they are due to a community that has been run by men for years. Rachel Weisz and Rachel McAdams star as the two women who had to suppress their desires for the appeasement of the men, and their own look back at the same, proving yet again about the world’s inability to move away from the things that they are faithful to. Whilst also not realizing that their faith is based on farce and years of made-up stories that mean nothing. 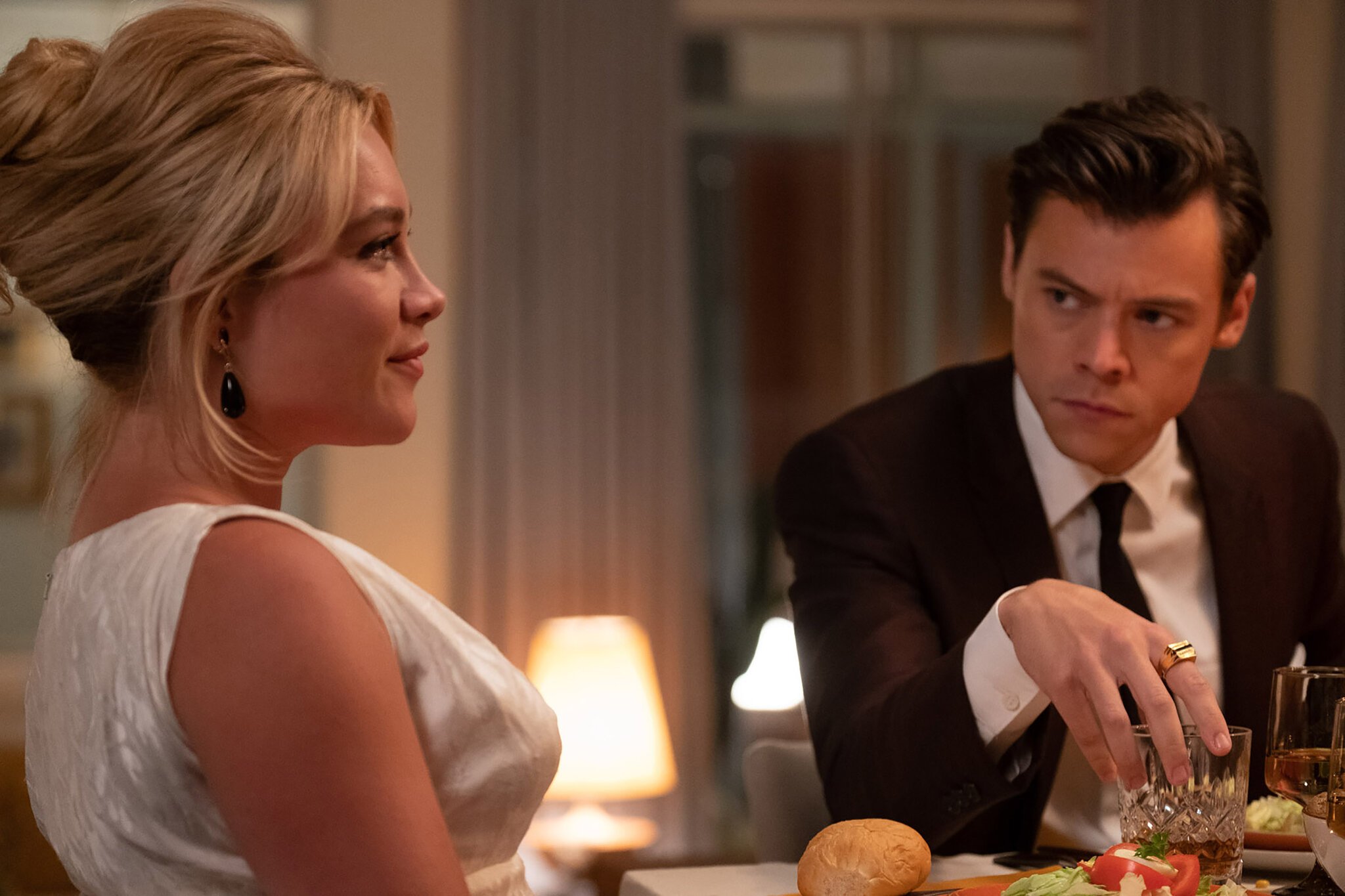 Now, this is a movie that might not feel like it belongs in the same league as The Wonder. However, it still makes the cut for movies similar to The Wonder because of two things. Number 1, is, of course, Florence Pugh being the center of both Don’t Worry Darling and The Wonder; and number two is that they are both stories about women trapped in a sequential reality that is made up of lies, cooked-up stories, and rules made up by men.

Don’t Worry Darling follows Alice living in a wonderland that feels too good to be true. The Victory Project that Alice’s husband works at is a mystery that we as an audience need to figure out, and Alice needs to come out of. Both The Wonder and Don’t Worry Darling again come down to the thematic similarity of men forcing women into following their rules and their regulations to an extent where it becomes a part of their faith in the world, and for that alone, I’d recommend it as a double feature.

THE WONDER IS NOW STREAMING ON NETFLIX. STREAM IT HERE