When you think of a period drama from the 19th century set in Irish Midlands, you automatically expect to be welcomed into the picture by a grey-blue landscape battered by howling winds and grassy meadows. Instead, The Wonder (2022), on Netflix, directed by Sebastián Lelio, opens in a film studio. There are naked bamboo structures resembling a set, and as the camera swings, a narratorial voice informs you that they want you to believe in this story; after all, what would we be without stories? The direction is loud and clear. This film wants us to temporarily suspend our disbelief and give in to the course of the narration. The question, however, is – What are we trying to achieve by such a consciously crafted beginning? The answer is the key to understanding the film or otherwise.

Lib Wright (played by Florence Pugh) is an English widowed nurse who has been sent to ‘watch’ over the famous fasting girl of 11, Anna O’Donnell (played by Kila Lord Cassidy). Anna has not had any food for four months and yet seems to be in perfect health. For the first few days that Mrs. Wright watches over Anna, she starts to believe that the latter has not been having any morsel of food except water. However, trained as a professional nurse and rooted in beliefs of scientific knowledge as opposed to religious dogmatism, she cannot bring herself to believe it. Sharing in her skepticism is a journalist, William (played by Tom Burke), while every day she is forced to observe the religiosity of this little girl, its family, and the townspeople. She checks every piece of furniture and Anna’s clothing for some evidence to disprove the supposed miracle, going as far as to forbid her family from touching her before and after bedtime. Anna’s health starts deteriorating rapidly, and Mrs. Wright must cease her ‘watch’, and take action instead, to help save Anna at any cost. The screenplay by Lelio, Emma Donoghue, and Alice Birch has been adopted from Donoghue’s 2016 novel that goes by the same name. This is a story, the practical truths of which you don’t get to inquire because you, as the audience, have already been warned about it at the start. 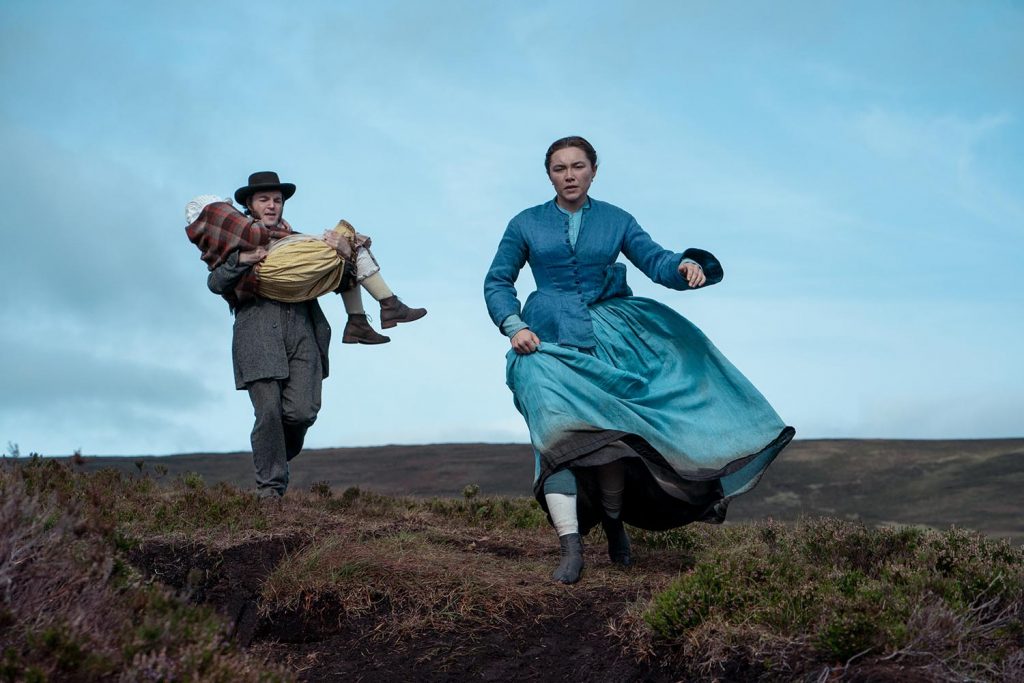 The storytelling takes its time and mostly meanders as if lost in its tracks along the sparse countryside to soak in its breathtaking views. It may make you feel a little impatient initially, but that only adds up to the film’s credits because the watching becomes tiring when you know there’s scope for action. Perhaps, this impatience is also the hallmark of Pugh’s character. A fascinating aspect of The Wonder (2022) is the way it highlights how stories get created and transferred. For example, the journalist’s account of Anna is a story in the newspaper that common people are reading and looking forward to learning more about. On the other hand, there is a story lying at the heart of Anna’s condition and another woven by the Church. In fact, Pugh’s character must also participate in the act of story-weaving and story-telling to steer the odds in Anna’s favor. It is a rare film that manages to lay its finger upon the sifting grounds that make fiction what it is – a story. Sadly, the narratorial voice may seem like an unnecessary interjection when trying to drive this point home by the end of the film.

If the prowess of Pugh’s acting had not already been proven in her previous works, especially Midsommar (2019), then her impersonation of Mrs. Wright does the trick for me. Her face is bony and stern as she observes Anna with professional detachment, but it quickly starts to quiver with emotions as her empathy is aroused. There is sheer desperation in her voice when she speaks to Anna’s mother after realizing that the latter was practically pushing her daughter to the brink of death or in her actions as she tries to shove a pipe down a bedridden Anna’s throat. She is walking the tightrope here, risking her professional caregiving for personal beliefs, and Pugh is gut-wrenchingly believable in her performance. However, it was young Cassidy who stole the show for me. Her eyes appear drained of light when she realizes that she is slowly dying and full of faith when she is narrating her story to Mrs. Wright, making me wish I’d not start caring about her so much to wonder about jumping into action right away.

The Wonder (2022) astonishes me because of the fine balance it has sought to maintain between portraying the two sides of the coin – dogmatism and scientific beliefs. The greys loom large in this one, complemented by the colorless palette of the film. However, I cannot help but wish that there was more to the story, to Burke’s threadbare character and the parallels between Anna’s fasting and Mrs. Wright’s food habits, but we cannot complain. Is the warning at the beginning of the film, then, a way to keep criticism from coming its way?

You can catch the film in select theatres or stream it on Netflix now!