Home»Reviews»Hold Your Fire [2022] Review: A Powerful Documentary in the Age of #BLM
Reviews/VOD

Stefan Forbes, famous for his Emmy-nominated campaigns and Boogie Man: The Lee Atwater Story, takes us through the annals of police history with his new documentary, Hold Your Fire. In approximately 100 minutes, Forbes tries to hold up a hostage siege situation, the first of its kind in NYPD (New York Police Department) history in America in the 1970s.

Before discussing the nuances of dotting this documentary and making it an exciting watch, a quick revision about the Black Movement in America will help us put things into context. In January 1970, Dr. Clifton Wharton Jr. occupied the chair as the President of Michigan State University, the first time that a Black person was heading a mostly White university in the 20th century, and thus heralded the decade of the post-civil rights movement era in America.

New legislation came into practice to protect the rights of all American citizens, and Black people seeped into the limelight in all fields of work, from academics and sports to state politics and popular culture. However, everyday racial discrimination was far from being abolished. The blacks also suffered from unequal employment and high incarceration rates, forcing the majority of them to suffer from extreme poverty. The documentary at hand is set at this time.

In January 1973, a robbery was about to take place at the John and Al’s Sporting Goods store, Bushwick. Four Black Muslim men (the identity markers are essential in understanding why they decided to get weapons for protection and eventual treatment and judgements they received at the hand of state-sponsored authority) were trying to steal shotguns, but the police crackdown took them by surprise. What ensued was a 47-hours-long hostage siege, some misfired bullets and critical injuries, and the realisation of the importance of a hostage negotiator for the first time in the history of NYPD. Harvey Schlossberg, a traffic cop with a doctorate in psychology, came forward with a ground-breaking, seemingly illogical approach to talking it out with the four young men. He is criticised but proven correct in his non-violent approach, a lesson as pertinent now as was 50 years ago. 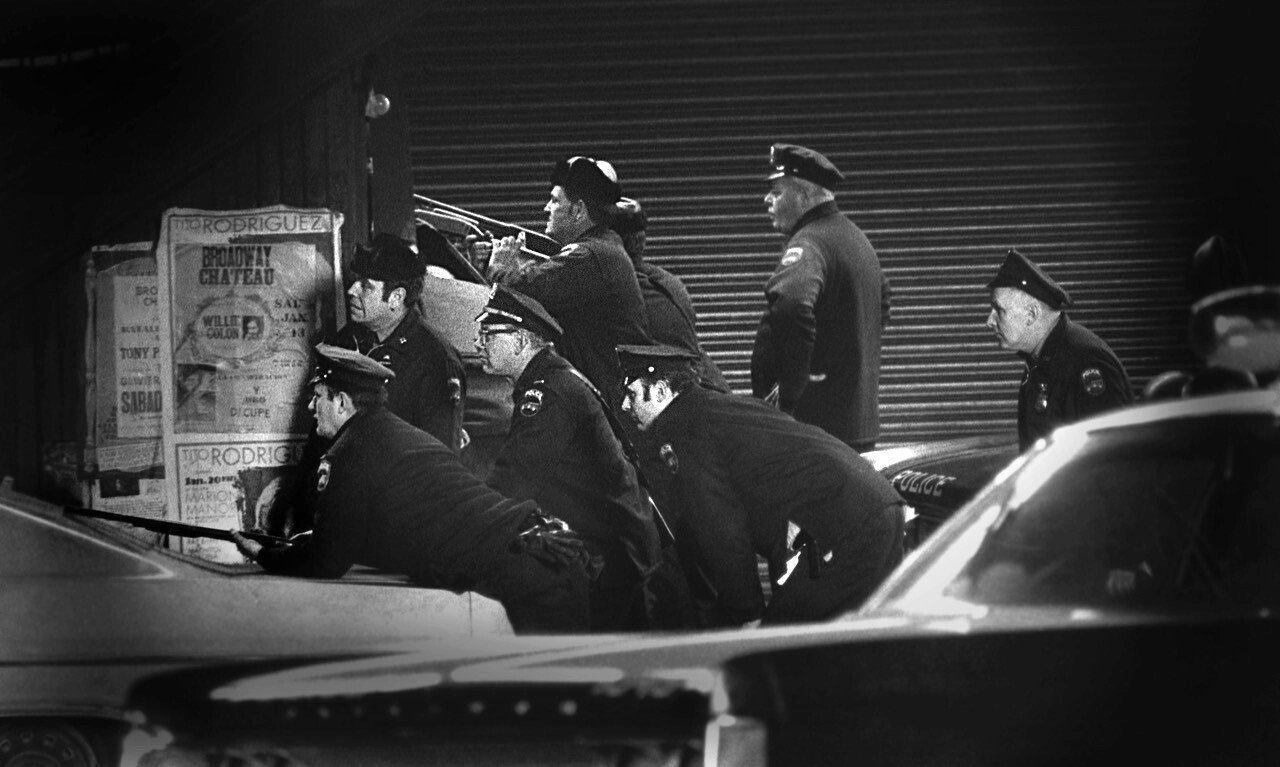 Forbes doesn’t beat around the bush. He also doesn’t let pointless voice-overs about New York and its suburbs set the tone of the documentary. If anything, he begins with rushed footage of the city and jumps right into the heart of the story. He layers the narrative cleverly with the opinions and memories of the White police officers who were on duty that day, the hostages, and one of the robbers, in a way that they seem to be in conversation with each.

It becomes increasingly interesting to note how some of the elderly policemen don’t believe that the cops were racist but go on to blindly thrust their White supremacist opinions in our face. It makes us stir in our seats, sometimes also with the realisation that age, time, and the ongoing awareness about racial discrimination against the Blacks, have softened them to acknowledge the humanity lying behind the seemingly ‘terrorist’ faces. There is urgency in the air; in the end, we have lived through a rollercoaster ride to catharsis. The incident went on to influence the methods of the police crackdown in modern policing history, especially since the blood-bathed history of the recent Attica prison uprising, was recently brought into focus by Stanley Nelson’s documentary, Attica, which premiered alongside this documentary feature at the Toronto International Film Festival, 2021.

The documentary, with its subtle tugs at racial commentary and individual memories from the incident, etch out a near-complete portrait of the hours-long hostage. It doesn’t judge anyone, a grey area for a work of popular culture to assume, one that might not go down so well with most viewers. However, since the rest of the three robbers are not present here, the way we look at the siege from the robbers’ perspective is narrowed down and allotted considerably less screen time. It is inevitable. This case study, on the other hand, shines a light on the psychology of the cops in a scenario like this one when rationality takes a dip and emotions hike. One of the more interesting things that made me stop and think about the contemporary racial politics in America was the unabashed confession by one of the hostages. She said that she’d rather be held at gunpoint than be released to White cops, a symbol of power not exactly known to be kind to people of colour.

There is misinformation, wrongful press indulgence, hours of neatly-edited real-time footage from the days of siege, adrenaline rush, and some basic racial unlearning in the documentary, Hold Your Fire. It successfully demonstrates how a small robbery can become sensational news due to the divided opinions of the powers at play in this scenario. It progresses at a controlled pace and doesn’t shy away from exploring the positives and negatives of every action taken in those hours. In light of the recent Black Lives Matter movement, the documentary gives us a chance to view police brutality against Blacks in an old but nuanced way. However, it is bound to garner criticism because of its seemingly apolitical nature and the tendency to over-explain the police’s point of view.

Is Forbes trying to water down the crimes against the Blacks by giving more voice to the White policemen than they deserve? It really is a matter of how you look at this work. It sure asks what justice entails and whether or not there can ever be a more encompassing view of justice in the age-old strife between the police and the Black communities in America. It is simply riveting to watch. It has already won the Metropolis Grand Jury Prize at the Doc NYC Film Festival, 2021 and other laurels.

‘Hold Your Fire’ releases in select theatres across the USA and on VOD platforms from 20th May, 2022

Zombivli [2022] 'Zee5' Review: A wild ride of a Zombie Apocalypse with a Social angle