Let’s be honest – It is difficult to make a new kind of teenage drama because coming-of-age stories are everywhere. From sex education to deciding upon one’s course of action after high school and the fate of teen romantic relationships, these stories have made brave attempts to cover them all. Inbetween Girl, directed by Mei Makino, squeezes comfortably into this existing, overcrowded genre. It has all the predictable markers of a teen coming-of-age story – identity crisis, dysfunctional family, an underdog protagonist with an unrecognized, budding passion, and relationship complications. However, Makino’s honest and heartfelt storytelling made it stand out for me.

Angie Chen is a Chinese-American student at an Episcopalian high school. She is one of the least-noticed students in class with a gift for doodling and sketching. Sadly, her Instagram posts barely get any traction, whereas Sheryl, played by Emily Garrett, the ‘most blonde girl’ in her class, is a social media influencer. She has a crush on the most popular guy in her class, Liam, played by William Magnuson, who is in a relationship with Sheryl.

Their lives become tangled when Angie and Liam decide to have sex together and later continue their affair secretly. Simultaneously, Angie is trying to adjust to the separation between her parents. Is the road to coming of age full of tears, fights, and mistakes? The premise of this narrative is predictable. Makino ties up the threads neatly, making it a story well-told with care and precision. I liked the little story-within-the-story idea in which Angie is a time capsule for herself. Although, the significance of using a vintage camera for the same is a little lost on me, especially considering it doesn’t tie up with her interest in visual arts. 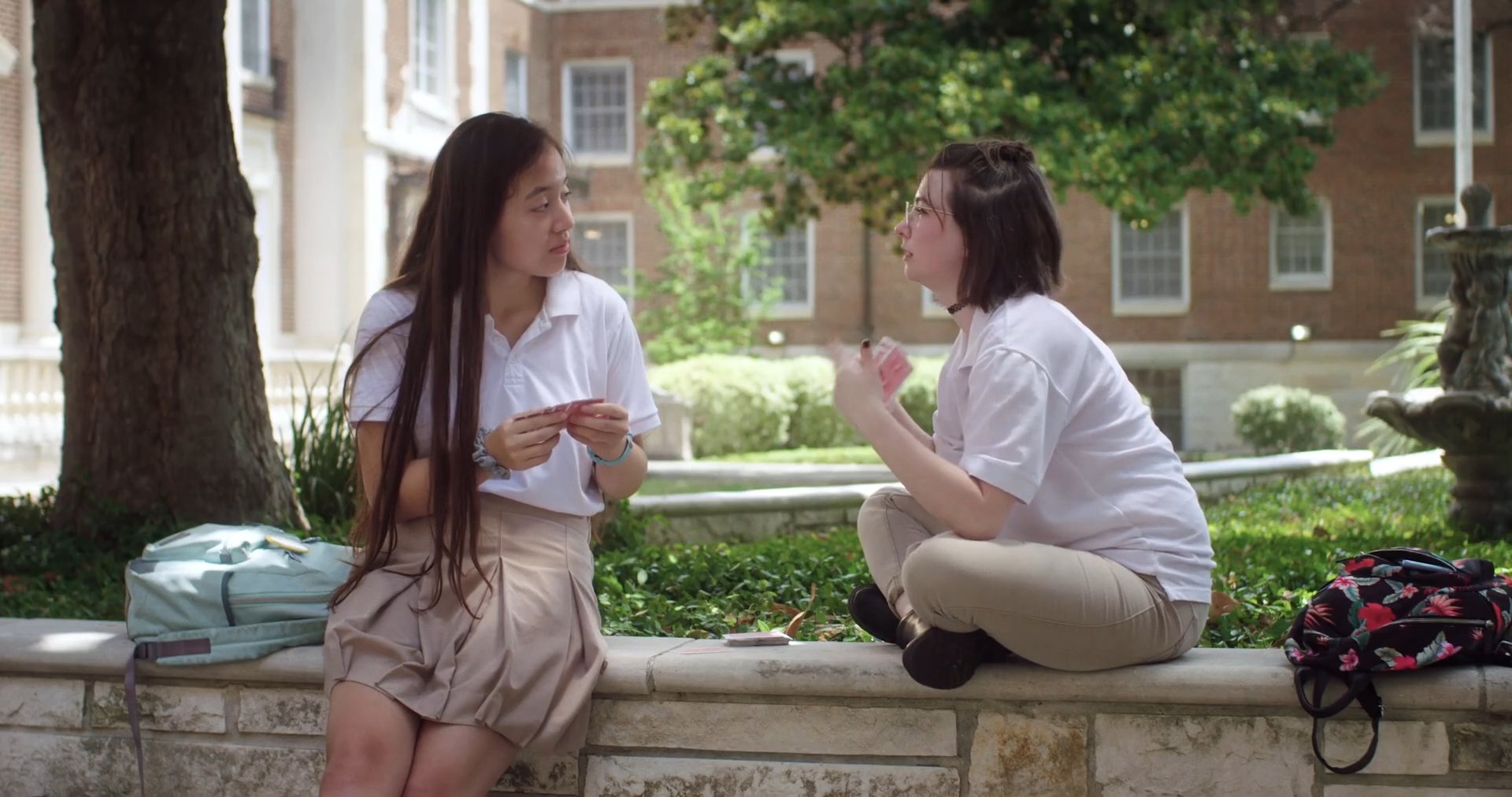 Emma Galbraith stands out as the weird-but-cute school girl. Her role demands maturity, and she delivers it religiously. I especially like her in that scene where she gets angry at her father. Her quietness and sardonic attitude turn into a burst of violent words and tears – a mood swing so unprecedented yet so intricate to the confusing range of emotions plaguing a teenager. I also personally liked her growing friendship with Sheryl. Although Emily Garrett’s character could easily be made into a mean-girl prototype, a White American teen, she has been infused with a certain human quality that makes us feel for her in this drama.

I only wish it had more scope for growth in this film. What also makes this film work for me is that it doesn’t blast into house parties or loud music as prime movers and shakers of the plot. The settings are relatable and commonplace – a Froyo shop, Angie’s room, the school, and Angie’s parents’ apartments. Little context has been provided about the little treehouse that is Angie’s safe space. I doubt that even if there were a logical explanation around it, it would have barely been believable to the scope of the urban setting in this film.

Also, Read – The Aviary [2022] Review – The Sun-Drenched Horror of Escaping an Eerie Cult

There is an essential conversation around identity crisis in the narrative. If I must repeat for every reader – who has possibly already crossed the threshold of a teenager a while ago – this period brings a feeling of sexual, emotional, and even academic alienation. Angie is not a brilliant student who knows that she will make it to the best university and pursue a path-breaking stream of knowledge. In one of the scenes when she is asked about the probable imagery behind her art, she confesses that she had put little thought into it; it was just a doodle. Besides being a biracial teen, she also struggles to understand her Chinese ancestry, especially as she witnesses her father speaking Mandarin with his new partner and daughter. More often than not, she conceives herself as a monster – a thing foreign to the people around him, not human, but ugly and undesirable. The imagery seeps into her art. That way, her narrative also traces the evolution of her maturity through her art. Her in-betweenness is more than just her ancestry, then. It is also a commentary on the period of teenage that all human beings are painstakingly bound to live through. She is also the in-between girl in a loving relationship between Liam and Sheryl. The title has been more than justified in the process.

Teenage is silly, but we only learn that in retrospect. Makino is not impatient with these teenagers. She is allowing them to believe that virginity is something noble and dignified. The charm lies in the first-person narrative that threads the plot together. A conversational and naturally charming teenage drama with a 90-minute runtime, Inbetween Girl allows every scene and setting to swell and grow on you. It has a flavor quite distinct from most teenage romantic comedies, say To All the Boys I’ve Loved Before, but it shines out as realistic, relatable, and plain heart-warming.