Multiple times through the narrative of Omar Dzlieri’s seriously unfunny debut film, characters claim that they have never been funny. It is almost like the director wants to convince us that we should forgive him for the absolutely juvenile jokes in “MICerz,” (a film about stand-up comedians) and accept this as a movie about the struggle that a certain area of Hollywood has to go through each day. But, we would forgive him in a heartbeat if that is what he focused on. Instead, he makes us sit thr0ugh 2 hours of friendly, over-the-top, and loud roasting that, in spite of all its swing-and-miss capabilities, never hits comic gold.

Somewhere deep down, there is a relatable story about a guy trying to understand what he really wants in his life, as he randomly motions through his days, but Dzlieri’s film is so unfocused, so badly edited and so random that you never truly understand its true intentions. On one hand, it wants us to witness the extremely down-and-dirty world of stand-up comics who are currently nothing, but at some point wish to headline some other big comedians. On the other hand, it also wants us to sit through over 90 minutes of forced humor where these few people in the film form a kind of alliance to save the one place that is an essential part of their days.

Anyhow, the film begins with Arnold (Austin Torelli), who is kicked out of his girlfriend’s place because he is an A-grade loser living off her and does nothing substantial to help. He wants to get into the stand-up comedy scene but in spite of putting his name out on open mics, eventually chickens out. Consequently, and totally out of the blue, when his girlfriend evicts him, he gets into his van and drive-off, only to have his van die out on him right beside an underground comedy club named Bomb Shelter that is run by Dave (Joe Manente). 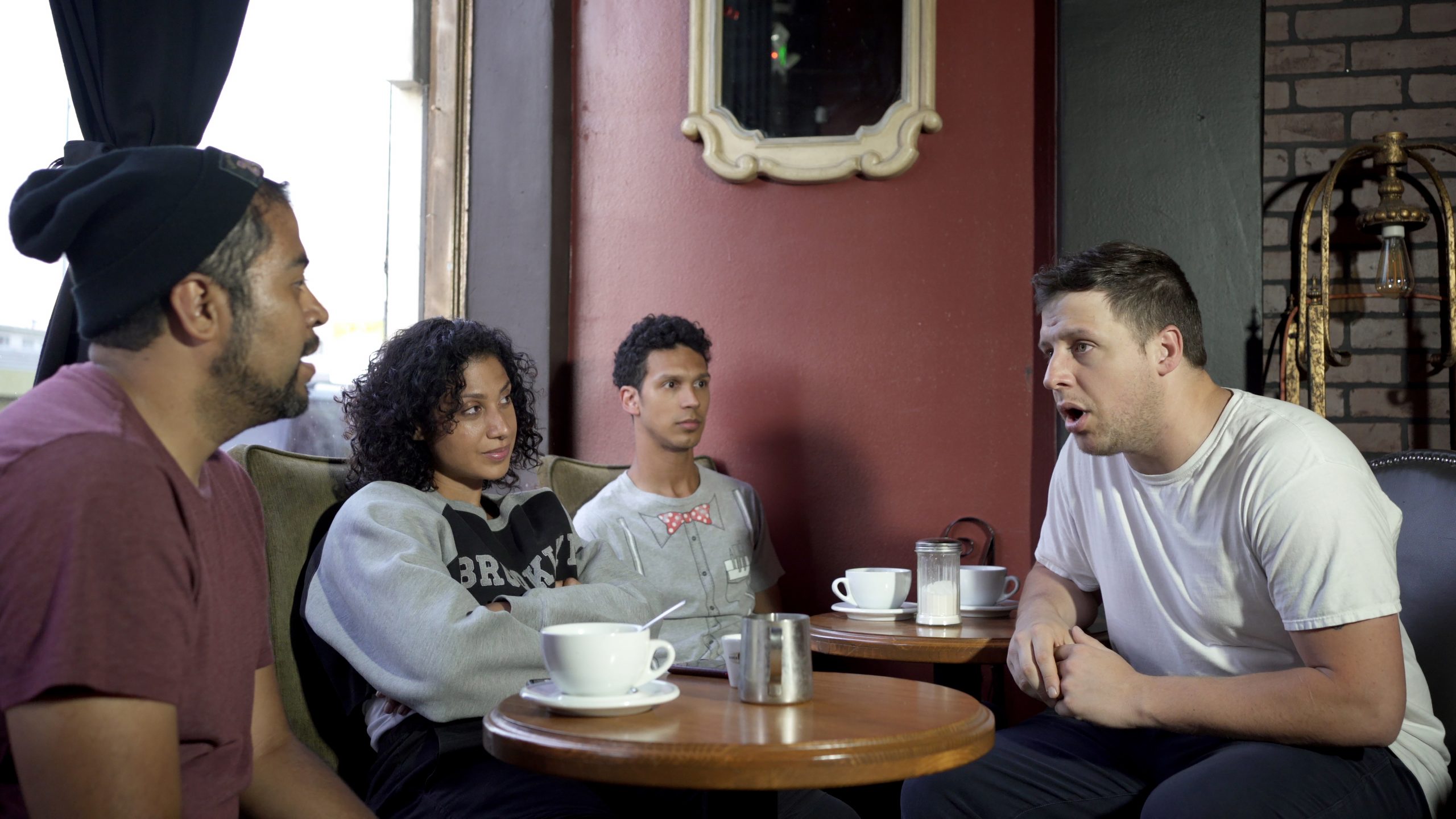 Dave, who feels like he is on coke the entirety of this film is initially reluctant and asks Arnold to leave the premise. However, seeing how he has nowhere to go and that due to his promise to help out with the bomb shelter (a place that would just dislocate and fumble into rubble if even a single set of wire gets tripped) allows him to park his van outside it. This is not only a beginning of an alliance but also the beginning of a friendship that extends over to other Bomb Shelter regulars like Dante (Dante Chang), Devontae (Christopher Donnellon), and Nelly (Kaylah Pantaleón).

All of them help each other cope with the rejection and mediocre life that they have been living. The band of friends also coerce Arnold to take up stand up comedy to earn a living, but before things could kick start for him, Dave runs into a problem that directly affects the fate of the Bomb Shelter as a place for would-be comics or a place that allows them to be unfunny. The rest of the film is about them trying to save the place and make something of their lives for a change.

Now, coming to the film itself, MICerz is as uninventive as its sorry title. There is not a single line or piece of comedy in the film that makes you laugh. The characters are just plain bland, and in spite of the relatable aspect of their struggle, its tough to root for any of them. Austin Torelli who plays Arnold is just too unconvincing and underwritten a character to make his struggle feel any real. Joe Manente’s Dave, on the other hand, is one of the most irritating characters you will see all year. He basically just shouts through the entire runtime and even though the director wants to make us believe in his present state, he just comes off as a scumbag who no one would like.

To top that off, MICerz actually never feels like a feature film that has a proper narrative per se. It just feels like some totally random sequences stitched together by someone who doesn’t know a thing or two about editing. I mean, there are times when the film randomly cuts off from scenes and others where totally unrelated stuff finds a place in the film. I get the budgetary constraints and do know that this must have been a venture about a few friends having fun, but when no amount of energy is actually put into making it any good, I can’t go ahead and call it good.