Home»Reviews»Dear Comrades! [2021] Review: A gripping tale about the two days of the Novocherkassk massacre
Reviews

Dear Comrades! [2021] Review: A gripping tale about the two days of the Novocherkassk massacre

Dear Comrades! Review: “Even now no one knows where the dead are buried,” wrote David Remnick in December 1990 for The Washington Post on the Novocherkassk massacre that took place in the Societ Union in 1962. What had started as a protest over an increase in prices of commodities, turned into an execution. The whole town signed a non-disclosure form after the government swabbed it all clean in no time. Although Julia Vyotskaya was born in the city, she says that nobody in her family ever brought it up. “Not only by what happened but also by what can happen.”

It is based on these events that Russian filmmaker, Andrei Konchalovsky produced, co-wrote, and directed ‘Dear Comrades!’ In addition to the price rise, the strike was about the cuts in salaries of workers. Writing with Elena Kiseleva, the filmmaker does not care much about history, or its events, or the facts. Remnick details it all though. “If you believe in character, that is enough,” Konchalovsky says, giving examples of Antigone and Medea. “Art is about human beings!”

To that extent, the writers have succeeded in creating a character who is not only pro-government but works for them. Despite everything she goes through, she is faithful to her country and communism. She is also unshaken in her beliefs. It is Vysotskaya playing this character who is still, stiff, and never smiles. As Lyudmila Syomina or Lyuda, she is phenomenal throughout the 120-minute runtime of the film. Andrey Naydenov, the cinematographer films in black-and-white and there’s barely a scene without her in the frame. 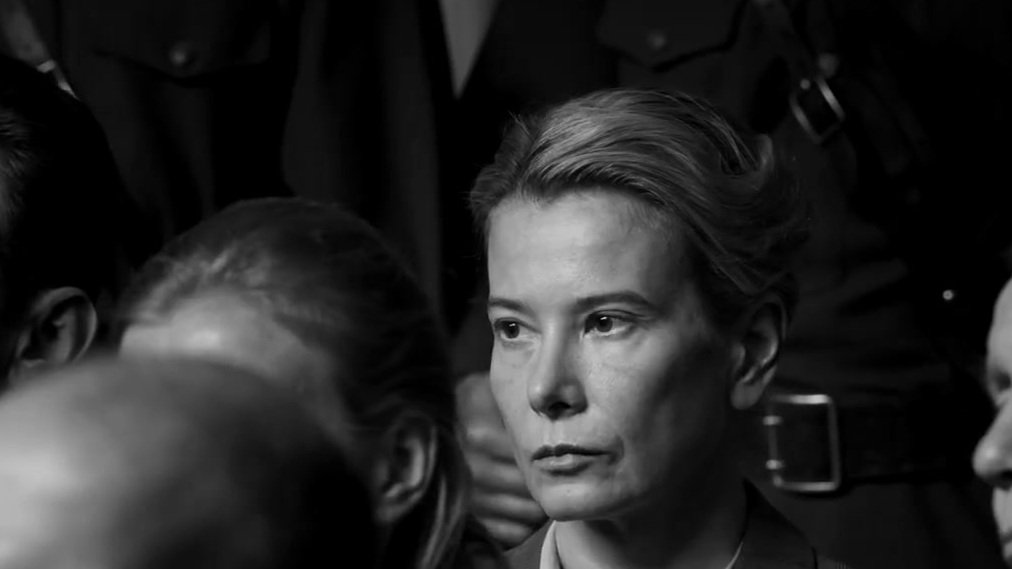 Lyuda wakes up early in the opening scene, despite being a government officer, to collect rations before a crowd gets there. She is sleeping with a man who also works in the same office. Neither of them has a clue about the rising prices. It is all hearsay to them just like to the townspeople – a sample of how any top-down system works. She is okay with an increase in meat, personally, but milk, she does not get. Soon, the man repeats the official word: “The change will result in higher living standards in the nearest future.” “The instructions say everything clearly,” he says, as she storms off to the deli.

The store already has a crowd, though, and the instructions were that officers keep their mouths shut upon getting rations. Lyuda also does as she is told. That is, pulls ranks and cuts through saying, “Comrades, coming through. Coming through, comrades.” Her grocery list: buckwheat, salami, Latvian cheese, gobies in tomato sauce, sprats, a can of cod, ‘Bear in the North’ candies, and ‘Tryoka’ cigarettes. In addition, she gets a few chocolate-covered curd bars, salt, matches, and a Hungarian liqueur called ‘Unicum,’ all upon the grocer’s advice. In exchange, Lyuda says she will give her a pantyhose she bought from the city because she bought two.

Also, Read – The Commissar [1967] Review – A Startlingly Envisioned Drama on the Cruelties of War

The sweets are for her daughter, Svetka (played by Yuliya Burova). And the cigarettes are for her father (played with great command by Sergei Erlish) despite showing us how the character succumbs to the helplessness that late adulthood often brings with it. After heading home, she gets a trim and goes straight to work and a meeting. As interesting as the mundane sounds, the plot begins with a siren sounding off. The workers at the electric plant have stopped working and locked themselves in. The regional secretary arrives to resolve matters and calm the workers. He tries, but there is a crowd in front of the office and they hurl something at him. They plan to evacuate the building. Two more things come flying through the window; the glass shatters. They are at the center of Novocherkassk, ducking!

“No use in talking. Arrest them all!” says our heroine at an all-party meeting, warning everyone that the people who are angry will return. Svetka, meanwhile, wants to be a part of the protest the next day. You can imagine Lyuda’s reactions to that! Her comments are more biting, political, and convincing. She is a Stalinist! They have an argument about Khruschev and Stalin, which ends violently. Violence is not how I would even begin to describe the events that unfold on the next day. You can see the color even if there is not any on-screen. You see much of it through the eyes of a person who has an unflinching belief in her country. 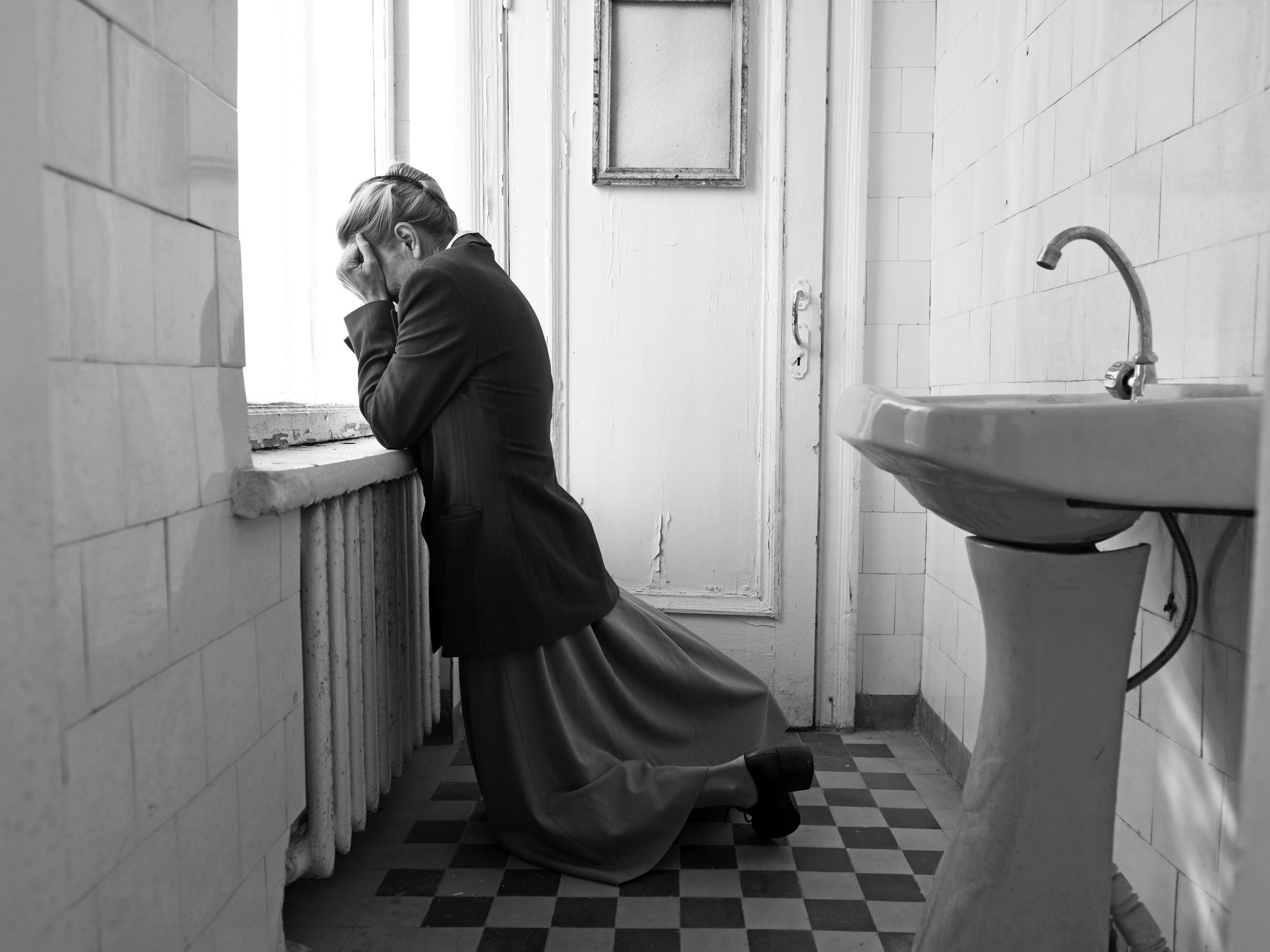 Sergei Taraskin and Karolina Maciejewska, who edited the film, cut quickly to trace how the action unfolded. The scenes remind me of the ongoing pandemic as I watch the film again. Or the documentary ’76 Days’ (2020). Or the second wave in India where bodies are burnt, the only difference being that they are piled one upon other in trucks and sent away to be buried and the streets are wiped clean like hospital beds. Nothing ever happened on 1 and 2 June 1962 in Russia. There was no trace of blood on 3 June 1962. Another hour of the film shows Lydia’s personal stakes at risk. Her contacts help, but she helps the authorities too. She does not lie to them and signs the non-disclosure agreement.

As Konchalovsky brings the KGB into the picture as well, he treats Lyuda’s story as he had intended to. He treats her life with such meticulosity and centrality that you do not care who appears wearing which boot and when. What are you to do when somebody or something you believed in your entire life turns out to be built on a bunch of lies? Are you to start afresh because you are holier than thou? Or hold on to them because you were once so in love and are expected to be loyal? Does any of it matter when death is knocking at your door?

In Russian with English subtitles; the word “comrade” can simply mean a friend. Many times, it has a Marxist connotation and takes on the meaning of somebody (according to Cambridge) who you “have been involved in difficult or dangerous, usually military, activities with. Dear comrade, watch this film for Lyuda! If she were alive on 1 June 1962, her grit would have got them all arrested that night and perhaps saved many of them rather than this violent slash hush-a-bye-baby track! Konchalovsky is right; his character is so strong that you root for her despite being a part of the problem somehow. He clearly doesn’t express any sentiment towards the protestors the night before the violence took place. Only in film!

Dear Comrades! [2021] Review: A gripping tale about the two days of the Novocherkassk massacre