Aleksandr Askoldov’s first and last film The Commissar (1967) is a great film on its own right. However, the story of how the film nearly got destroyed only makes me more grateful of its existence. The glasnost policies allowed the film to resurface and eventually it was screened in 1987. From then on Askoldov gained lot of attention. Marat Grinberg’s small book about the film brilliantly analyzes the work as well as lays out the ordeal the film-maker went through after its creation. Born in 1932, Mr. Askoldov lost both of his parents to Stalinist Purge by the time he turned five. He was reportedly sheltered by a Jewish family, before growing up under the care of his Grandmother.  He later graduated from Moscow State University, majoring in Philology

Taking into account such a background, Askoldov’s The Commissar doesn’t solely come across as a work of idealism or pure anger. Maybe the film-maker was considered naïve back then, for endeavoring to make such an incendiary work in the Soviet political context. In The Commissar, Askoldov’s representation of ‘Jewishness’ and portrayal of Russian Civil War (1915-1922), particularly the ‘revolutionary violence’, would have been considered outright sacrilegious by the ideological overseers of the time. Consequently, Askoldov was banned from film-making or engage in any film work, and the film print was immediately confiscated and ordered to be destroyed. It is said that the Askoldov faced other major changes, but thanks to the intervention of his actors Mordyukova and Rolan Bykov (who were renowned stars) he was spared. 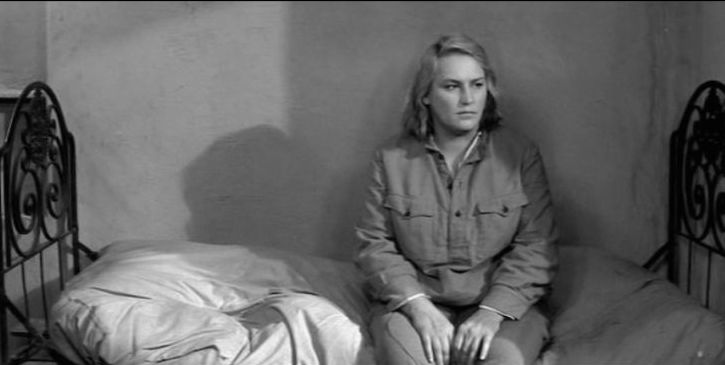 Before getting into film-making, Aleksandr Askoldov worked in the Ministry of Culture. There’s an interesting story of how his encounter with actor-director Rolan Bykov as a ministry official pushed him to leave his job and become a director. But Askoldov was constantly under the scrutiny of various committees that were responsible for different stages of movie production. In the 1988 interviews, the director mentions the goal of “live through this day of shooting, because tomorrow it may be shut down.” To understand the outrage Commissar sparked in the political circles of Soviet Union, a little knowledge about the history of anti-Semitism in Russia, and the history of Soviet totalitarianism is necessary. Nevertheless, the moving drama and the stunning modernist aesthetics will have a profound impact on its viewers, regardless of the context of its time and generation.

The Commissar captures our attention right from its wordless seven minute opening sequence. Cinematographer Valery Ginzberg and director Askoldov builds up brilliant momentum to the narrative through beautiful yet stark imagery. In the opening sequences, we see the soldiers of defeated White Army wearily walking the barren land that’s only adorned with a lone statue of Virgin Mary with a burning candle. After the White Army’s withdrawal from the town of Berdichev (in northern Ukraine), a lone boy soldier of the Red Army walks through the empty cobblestone streets of the town. Radiating happiness the boy signals his comrades. The dizzying camera movements and the aggressive editing in the opening sequence signals the arrival of one ruthless war machine over the other not as a relief, but as a continuum of stress.

The titular character is a woman of large build named Klavdiya Vavilova (Nonna Mordyukova), who leads the cavalry unit. Vavilova, a staunch believer of the Bolshevik cause, is established as a coarse ‘manly’ woman. Her hard and cold facial features show no feelings. She condemns a deserter – who has gone to meet his wife – to the tribunal and a certain death sentence. But Vavilova is revealed to be heavily pregnant, a fact which she can’t cover anymore with her winter clothes. She views her pregnancy as an obstacle to the revolutionary cause. Moreover, she laments how it’s too late for an abortion. The idea of patriarchal society was somehow suspended during the times of the revolution. Hence women had considerable rights, including the right to abort.

Askoldov while showing the egalitarianism of the Marxist ideal also comments how it has deterred Vavilova to deny her female identity, to the point of seeing her plight and her emotions as a malady. She is then dismissed of her duties and housed with a poor Jewish family until she gives birth. Yefim Magazannik (Rolan Bykov) initially sees her presence as an intrusion. He, his wife Maria (Raissa Nedashkovskaya), and six children live in the cramped space. Yefim makes little money in his profession as a tinker and they have nothing but potato to eat. But there’s an impish charm in the way Yefim shrugs the hardships and dances in the sunshine.  And before long, Vavilova warms up to Maria, and her sullen exterior slowly melts away. After the difficult child birth, Vavilova takes pride in her baby boy and takes a walk through the town. Overtime, she becomes a part of the Magazanniks; an aunt. But when the ballet of war seems to go in favor of White Army, Vavilova is burdened with grim visions and forced to make difficult decisions.

In The Commissar, Askoldov depicts revolutionary fervor through the perspective of those who are caught in between the ideological battle. Therefore, it’s a narrative of stark reality than one of heroic lyricism. Askoldov’s dazzling visual juxtapositions and a tad over laden symbolism plays a key role in creating the oppressive atmosphere than Vasily Grossman’s short story (on which it is based). The birth pangs rouse in Vavilova the traumatic memories of war, particular the ordeal their regiment faced in the desert and the death of her lover in combat. But Askoldov and Ginzberg’s agile camera stages the bundle of memories in an almost dreamlike manner that looks spectacular as well as nightmarish. There’s heavy symbolism related to horses and water, which seems to precede Andrei Tarkovsky’s interest in these two elements.

Askoldov’s sharply etched visuals are however never without humanist messages. In one of Commissar’s most disturbing sequence, we see the three children of Magazanniks, ganging up on the older girl and playact the persecution as done by the adult soldiers. They call her ‘Yid’ and laughingly tie her to the swing even while she cries for her mama. Earlier, we see the same children bathing naked, peacefully sleeping amidst the sounds of distant battlefield. The emotional devolution though subtly emphasized, is more devastating to witness. Askoldov delivers further emotional blow when the Magazannik family and Vavilova are trapped in the cellar, enervated by falling shells. Vavilova’s grip on the idealistic fervor seems to be loosening. She also has a searing vision of Magazanniks along with other Jews being herded into a death camp. It could be seen as a bleak commentary on Anti-Semitism in Soviet Russia that’s pervasive and existed beyond the context of Holocaust.

Overall, The Commissar (104 minutes) belongs to the remarkable and bold series of Soviet Union films, which has outlived the restrictive ideology of its time. It’s multi-layered humanist drama and distinct visual style hasn’t lost its freshness and context.

The 35 Best South Korean Movies of the 21st Century