Aleksei Yuryevich German (1938-2013) was considered by many as the equal of Andrei Tarkovsky, the auteur oft bedecked with the title, ‘best Russian film-maker’. Although both these great directors were stifled by Soviet censorship, Aleksei German was more victimized by the draconian measures. From his 1968 directorial debut The Seventh Companion (co-directed with Grigory Aronov) to the masterful sci-fi flick Hard to be God (2013), Aleksei German made only six films. His first solo directorial effort “Trial on the Road” (‘Proverka na dorogakh’, 1971) took a demythicized look at the Great Patriotic War, provoking troubles with the censors. The film only released fifteen years later in the glasnost era (the 80s Soviet government policy of transparency and openness in order to democratize the nation).

German’s second film Twenty Days without War (1976) – also revolved around World War II – was banned for some years.  The director’s third film My Friend Ivan Lapshin was made in 1982 (released in 1986) – a masterpiece that’s voted as the best Soviet film in a national poll of film critics. In 1998, director German released his most visually provocative work Khrustalyov, My Car! (made with the help of foreign funds and it wasn’t banned). Yet, the film was critically panned during its release (now hailed as a masterpiece). Later, German worked for more than a decade to adapt Boris and Arkady Strugatsky‘s sci-fi novel Hard to be God (Srugatsky brothers are also the authors of Roadside Picnic, which was adapted by Tarkovsky under the title ‘The Stalker’). Hard to be God was a stunning allegory on the Stalinist era, which was nearing its completion when Aleksei German passed away.

Similar to Trial on the Road: Come and See [1985] — A Chilling Reminder of Nazi Carnage

Trial on the Road (1971) is based on the short story Operation New Year, written by German’s father and distinguished author, Yuri German. Mr. Yuri actually convinced his son, Aleksei German to pursue a career in films and stage. He graduated as a theatre director in 1962 and studied film under Grigory Kozintsev (‘The New Babylon’, ‘King Lear’). Since Trial on the Road was a film set during the Great Patriotic War (June 1941 – May 1945), it was expected to showcase Red Army’s heroism. While director German conceived elaborate set-pieces that’s as brilliant as the Hollywood war films made in the same era (‘Train’, ‘Von Ryan’s Express’), the crux of the narrative explores the profound complexities of war and the alleged heroism in the actions. Trial on the Road’s protagonist directly challenged Soviet doctrine of showing no forgiveness for former collaborators and prisoners of war. Lazarev (Vladimir Zamanskii) is depicted as a former Red Army soldier who has defected to the Nazis, only to once again switch backsides and fight for the Russian partisans. Lazarev voluntarily surrenders to a Partisan unit and he is treated with suspicion, but the unit leader Lokotov (Roland Bykov), a genial man, doesn’t pass the order to shoot the traitor. 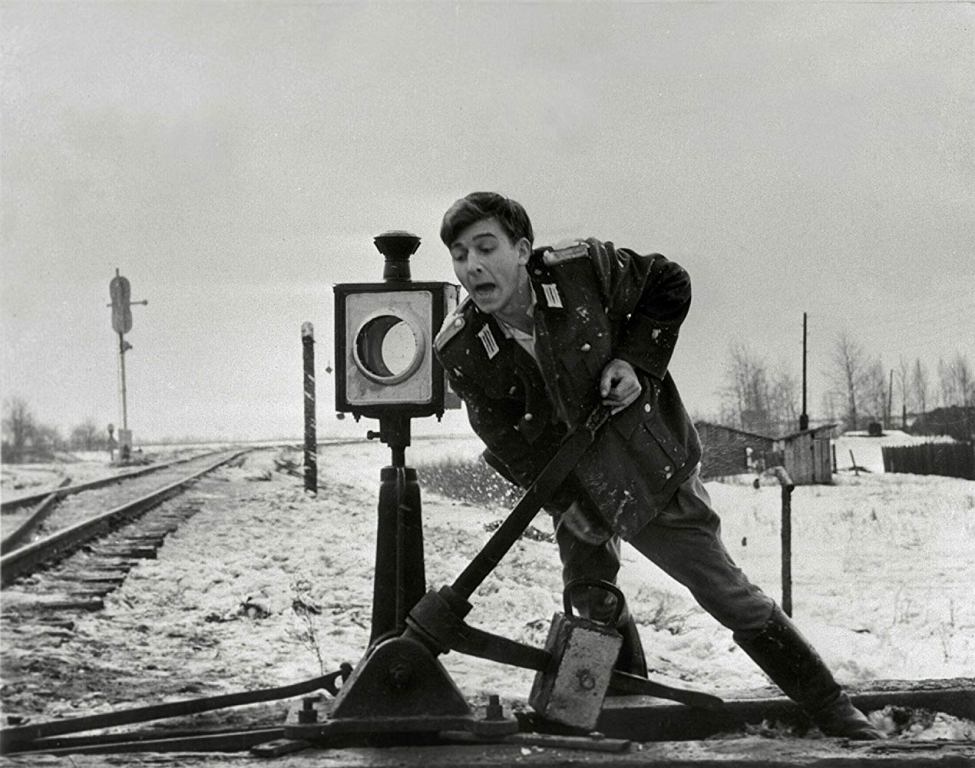 Contrary to staunch Commissar Petushkov’s (Anatoliy Solonitsyn) opinion, Lokotov hopes Lazarev might be useful for something. Lazarev’s atonement doesn’t gain any respect from the members of the partisan unit. He is put through various trials to prove his loyalty. Lazarev audaciously attacks and captures a German military car. But an able-bodied partisan Solomin (Oleg Borisov) is killed in the mission (by Nazis), which only raises suspicion on Lazarev. Eventually, he is sent on a dangerous mission (along with three other partisans in Nazi uniforms) to steal a food-provision train by using his former Nazi identity and the captured German military car. As the ex-collaborator is on his path to commit a truly heroic act, we get a peek into the conflicts between Petushkov and commander Lokotov. The former think that goals must be achieved at any price, whereas the later feels human life is more valuable than strict ideologies.

Aleksei German’s disillusioned perspective on war opens with stark images, studying the frustrated faces of Russian farmers, standing in a muddy landscape that’s endlessly pattered by rain. The camera pans out to reveal Nazis with their petrol truck, dousing the farmers’ potato harvest with petrol. A voice narrates the miserable plight of the peasants. The harsh black-and-white image itself speaks highly of the despair as in one immaculate shot we witness Nazi forces loading trains with stolen livestock. It’s cut to a sequence that characterizes the Russian partisan forces. Both the German and Russian forces look surprisingly inept.

The Soviet partisan forces march like an unruly bunch, telling mindless jokes. A Nazi transport is watched through the binocular of a partisan commander. They are waiting to ambush the German forces. There’s a brilliant detailed close-up shot of Nazis (from officer to private), seen through binoculars’ pov, with the commander passing comments on each of them. Furthermore, contrary to the cinematic depiction of ‘evil krauts’, the Nazi soldiers resemble common people, plagued by the same tiredness and harsh cold afflicting the partisans. The commander’s comments don’t speak of heroism or sacrifice or fatherland; it’s just another day to get on with this Nazi-killing business.

Director German shatters myths surrounding the united Russian front to encounter Nazism. He focuses as much on the internal battles in the guerilla unit compared to the large-scale gunfights against the enemy.  In the excellent ‘Senses of Cinema’ article about the film, it is mentioned that this particular line of thought caused problems with Soviet censors (mentioned that ‘film distorts the image of a heroic time’). Lazarev is a very enigmatic figure, who couldn’t be easily fit into the title of ‘hero’. Despite his act of redemption, his weakness is often highlighted. The director also deliberately reveals very little about Lazarev, keeping the viewers in uncertainty.

Director German’s film-form juxtaposes frantic movements in combat fields with lengthy meditative sequences. He depicts warfare as brutal and meaningless; a war mostly carried out in snowy waste-land, sparsely populated by ramshackle wooden cabins. In the sharply-edited war sequences, German observes more of the devastation than any display of bravery. In one powerful visceral scene, women run out of residential spaces, few of them cut down by shrapnel pieces. In another episode, Lakatov refuses to blow-up Railway Bridge since a boat full of Soviet POWs are passing under the bridge. The director’s intention is to question the inherent mythology of war: that anything is justifiable for achieving success (or the inane goals), even if it means obliterating your own people. German also excels in depicting the alleged heroic act in the final scene; an act that’s impeccably free from heroic illusions.

Trial on the Road (97 minutes) provides audacious, a complex counterpoint to the simplified Russian perspective on the ‘heroic’ struggles of World War II. It’s ambiguous, ironical tone subverts the conventional wisdom on heroism and warfare.